Loss and bereavement during COVID-19

Six illustrations attempt to record the experience of losing a loved one during the COVID-19 pandemic.

In the project ‘Telling Stories’, the museum teamed up with the Community Action Team at St Christopher’s Hospice, Sydenham. The project brought together 10 people who had lost a loved one during the pandemic to share their experiences within a supportive environment. The group were invited to decide what they wanted to communicate to the public. We wanted to find a way to record what it was like to suffer bereavement during the COVID-19 pandemic, and represent this in the museum’s collection as part of the Collecting COVID project.

The approach drew upon the discipline of storytelling and was developed by Mary Hodgson, Community Action Lead at St Christopher’s, who facilitated the group and its decision-making. The Museum of London commissioned illustrator Olivia Twist to join the group and visually illustrate their stories. She did this by developing and producing a set of riso prints, with the group as co-authors.

“These six prints are a journey through grief and being bereaved… showing a bit of hope and light at the end.”
– Sheleen, co-author Telling Stories

The resulting series of six illustrations speak about grieving and coping with loss, while living under lockdown and other restrictions imposed to stop the spread of COVID-19. The images do not directly depict anyone involved in the project; in this way, they are anonymous. Two sets of the prints are part of the museum’s collection.

The final illustrations below have been paired with quotes from interviews with members of the co-authoring group, in which they respond to image, making connections with their personal experiences. 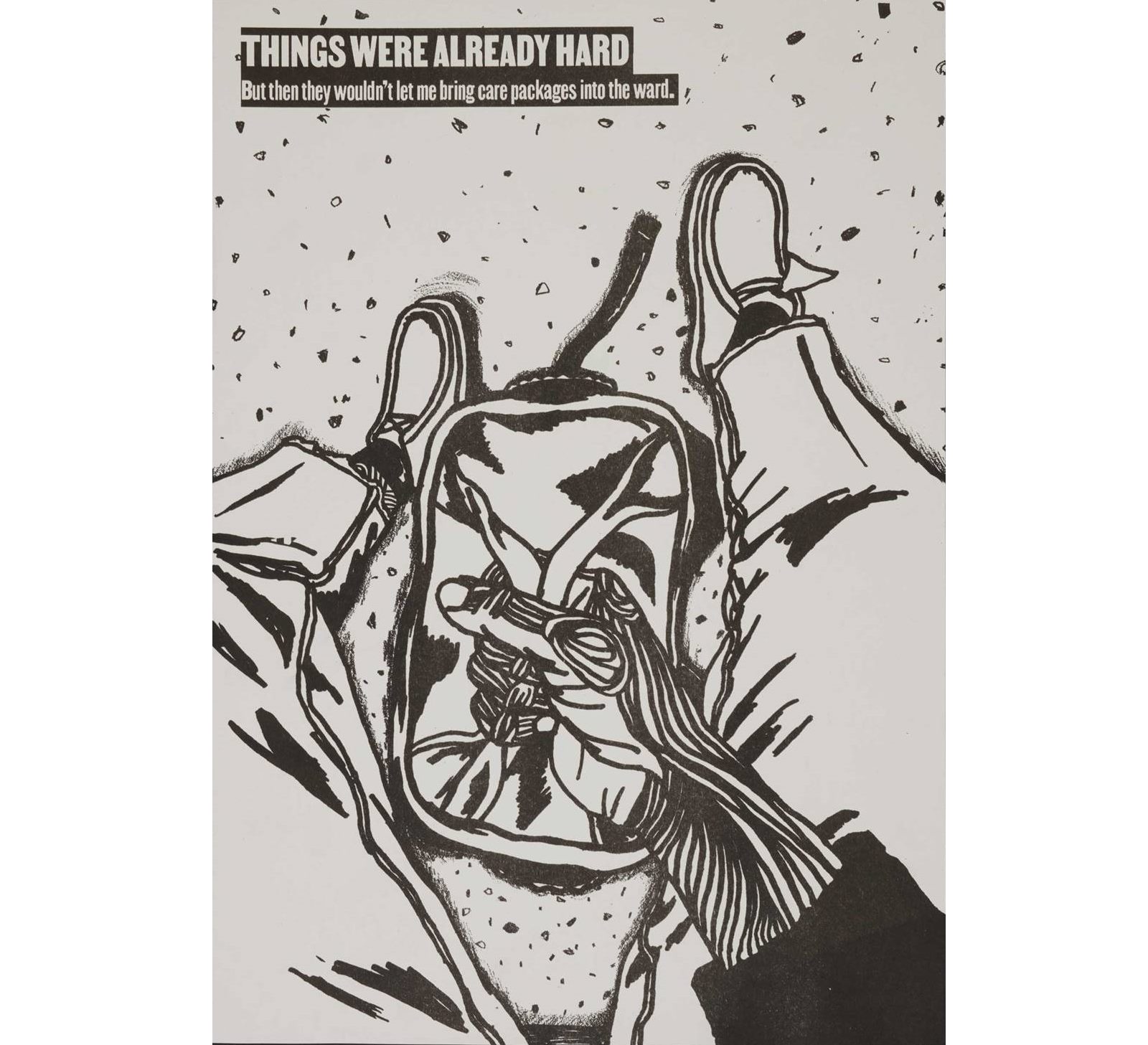 FAY: “That hits home with me, because during COVID, some hospitals — the majority — didn’t allow people to visit. So, when your loved one went into (the) hospital, you didn’t see them. But in my particular case, I was allowed to go and visit (as the) one nominated person…. That brought some relief, that I could visit. But it was also another pressure that you were the only one who could visit, and there was no one to share that terrible worry and burden with, really.”

JULIAN: “You want to look after people and take care of them. It’s important on a personal basis…. Not being admitted (to see them at the hospital) was simply cruel and wrong. I only had it once, when I couldn’t see Mum. And it was fairly near the end. It’s very hard not being able to be there…it can be simple things, like just holding their hand.”

...the number of people...at the funeral kept changing 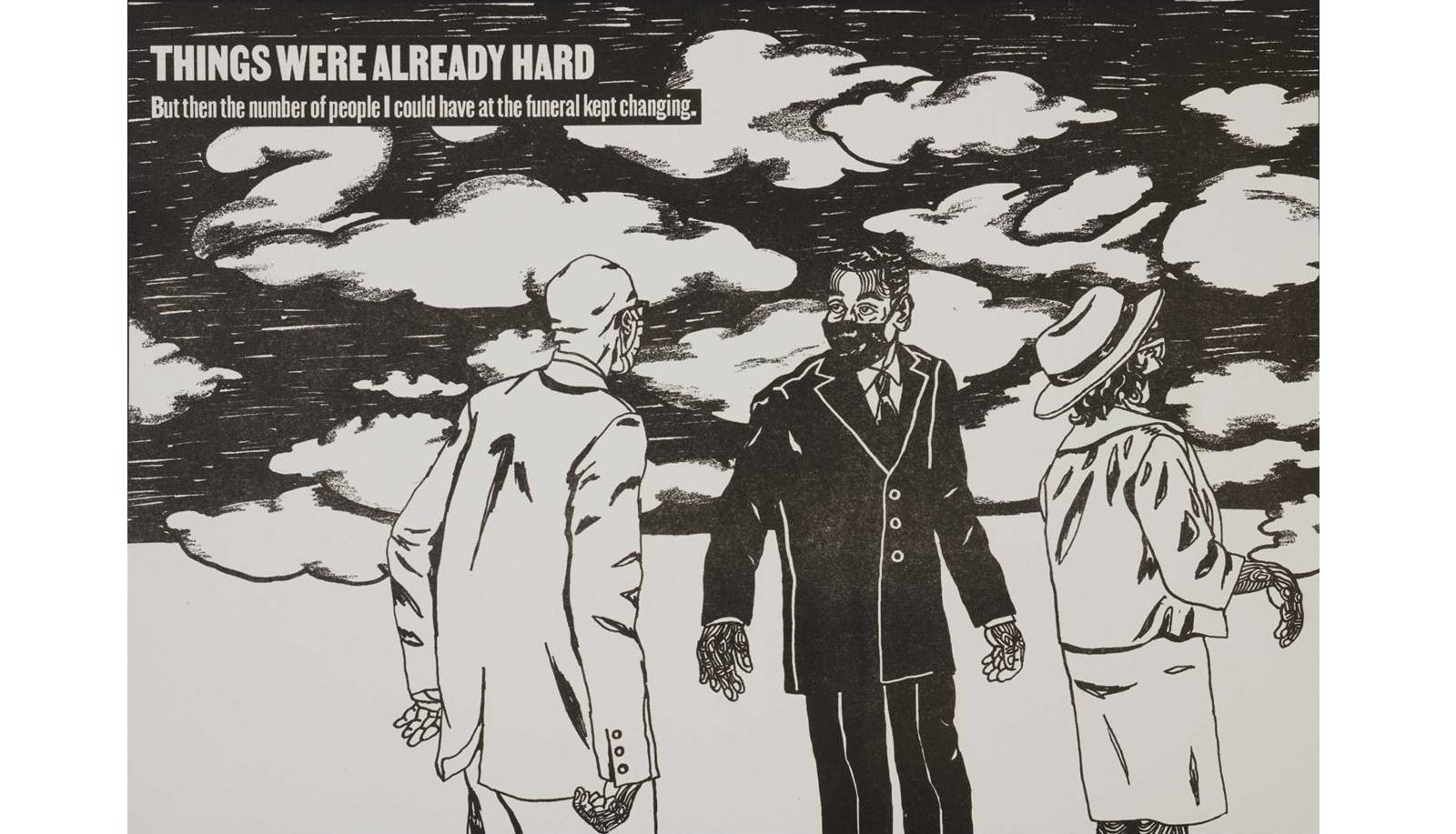 CHLOE: “At my Dad’s funeral, we were only allowed 10 people and they literally counted those people in. So, people had to stay outside…. Having a set amount of people at the funeral — for some people it was like a blessing in disguise — and for others…(it was) really, really upsetting. People felt like they couldn’t give their loved one the true send-off that they deserved.”

JOHN: “Often you want to make a funeral a celebration, but it was very difficult to make a funeral a celebration at this time…. People could only meet socially distanced and wearing face masks; there was no singing at the funeral, you know…. Normally when people greet each other at a funeral, they hug each other and shake hands. But you couldn’t do that and that (the illustration) captures the distance between people who are grieving and want to show compassion to each other but were unable to do so.”

...but then the phone stopped ringing 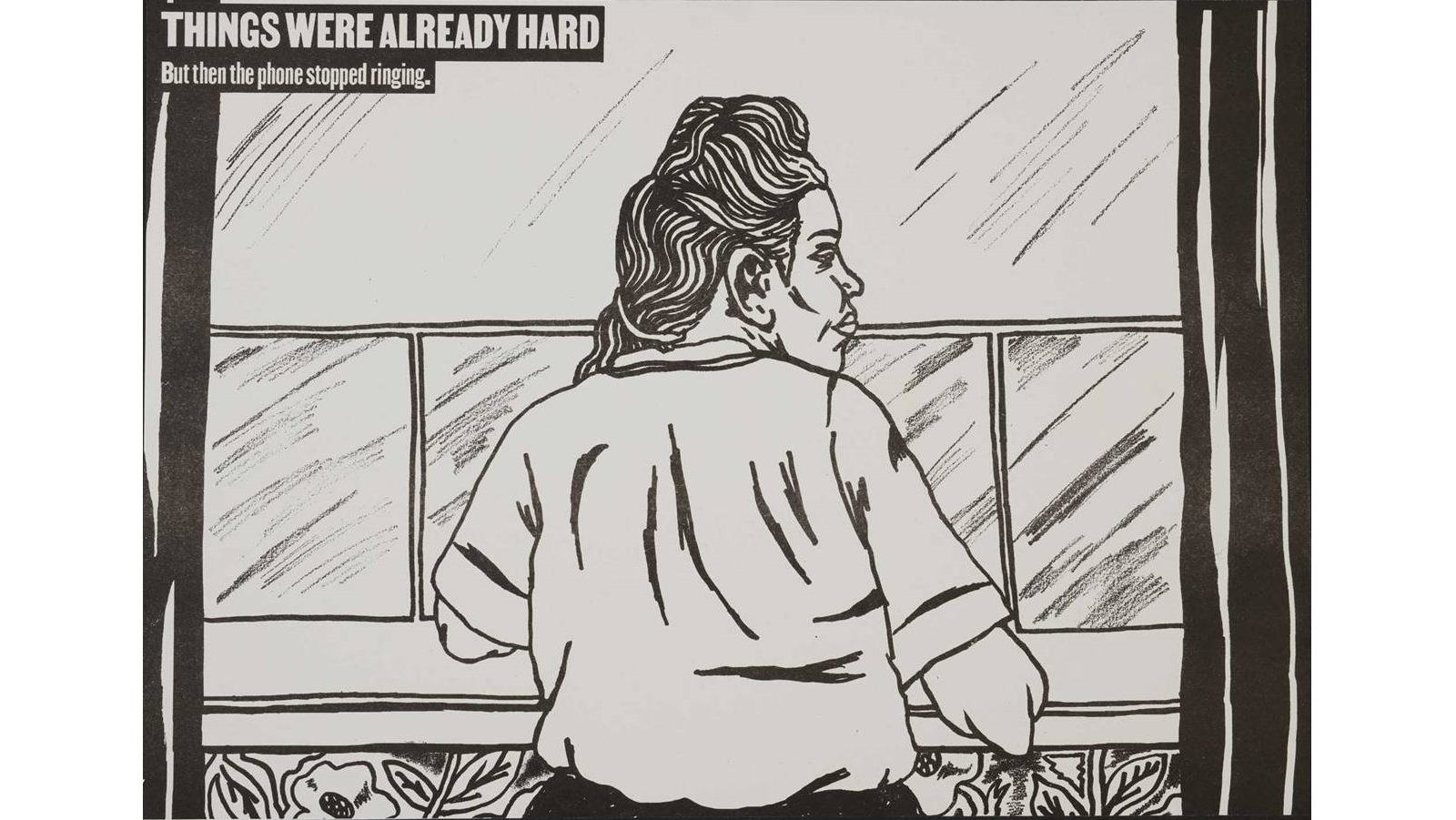 SHELEEN: “It’s illustrating that people stop ringing after a while. I experienced (that) myself very much. Like, (during) the early stages, people were ringing me all the time, but now a year-and-a-half later, people don’t really ask me about it so much, you know? And it’s not less important than it was a year-and-a-half ago. It’s just people, maybe, getting to move on with their own lives and don’t really realise that it’s an ongoing process for you.”

JOHN: “She’s turned her head like she’s heard a sound and she’s hoping that is somebody ringing; but it’s not, because she’s just staying where she is, you know? That captures quite well the loneliness of people who are bereaved. And, particularly during the pandemic, when people couldn’t visit people in their own houses, so the phone was often their one means of communication, and when people stopped ringing, because they don’t know what emotional state you’re going to be in…, then it compounds your isolation. And then the further isolation of being bereaved as well, and missing your loved one.”

CATHERINE: “COVID just made that barrier between people. I live opposite a park, and people would come in their cars and walk, and families would come with children… And people in the summertime became quite…disruptive and complacent, (like) ‘I’m all right; don’t care about anyone else.’ And it was a very hot summer; you couldn’t open the windows, it was just too noisy. And then I’d go to (my friend) Lynn’s and it would be silence, and poor Lynn would be there on her own.”

...all I saw was news about death 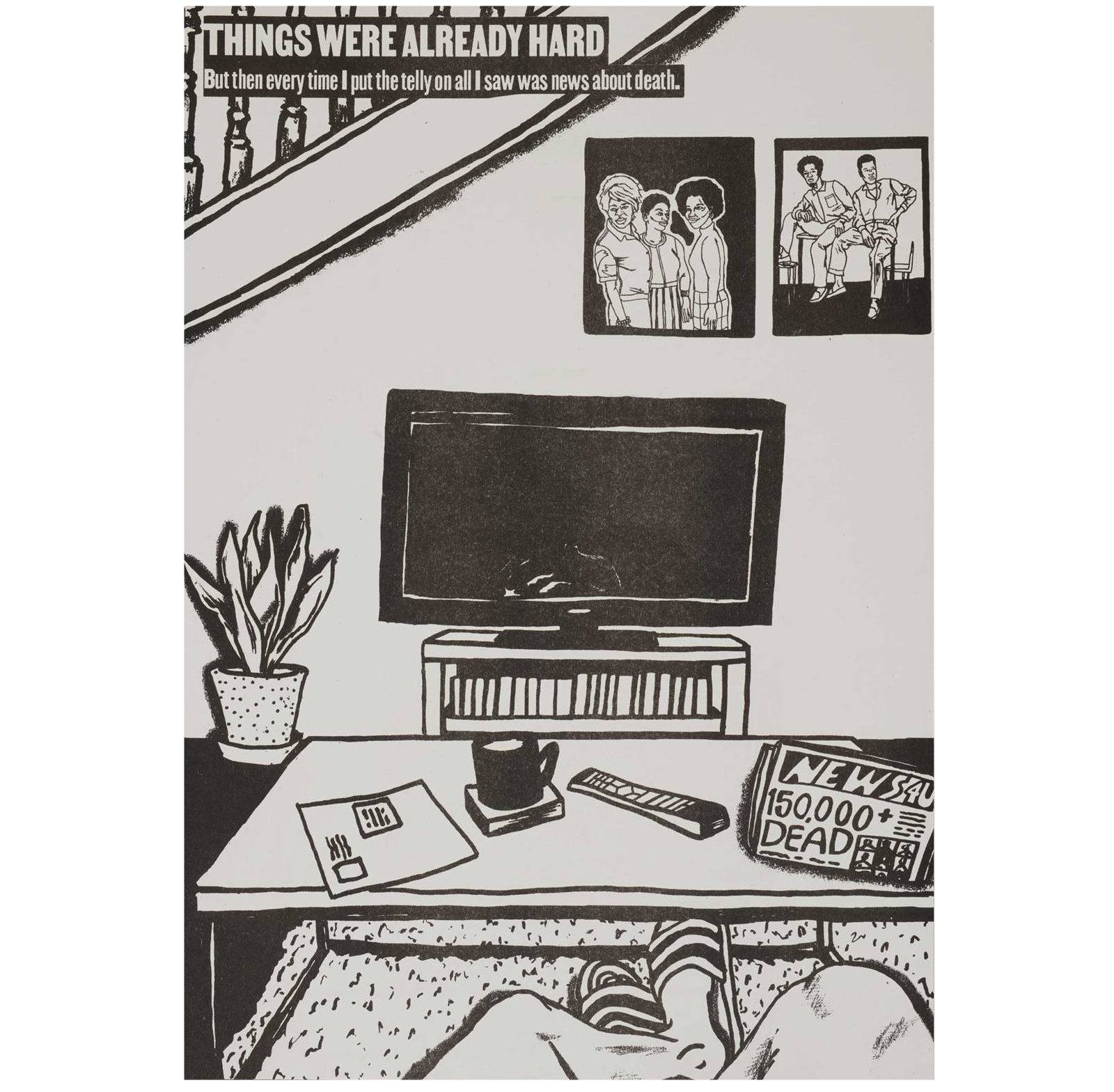 MICHELLE: “And you sit there in isolation and thinking: ‘I just don’t what to do. I’m sitting here, I’m so sad. Don’t know — I think I’ll put the TV on…. Should I put the TV on? No point putting the TV on because it’s (the) same news’.”

JULIE: “…in the end, I just switched off the TV and, I mean, it’s been well over a year-and-a-half now since my husband died and I don’t watch TV at all now. I don’t want to see any news; I don’t want to be reminded of death.”

CHLOE: “There was a lot of anger and frustration, because every time the TV was on, it was about people passing away due to COVID. And my loved one, and lots of other people’s loved ones, didn’t pass away because of COVID, but all that was plastered in our face was COVID deaths and it, kind of, felt like every other death was not valid at that time.”

...things you would do to cope weren't allowed 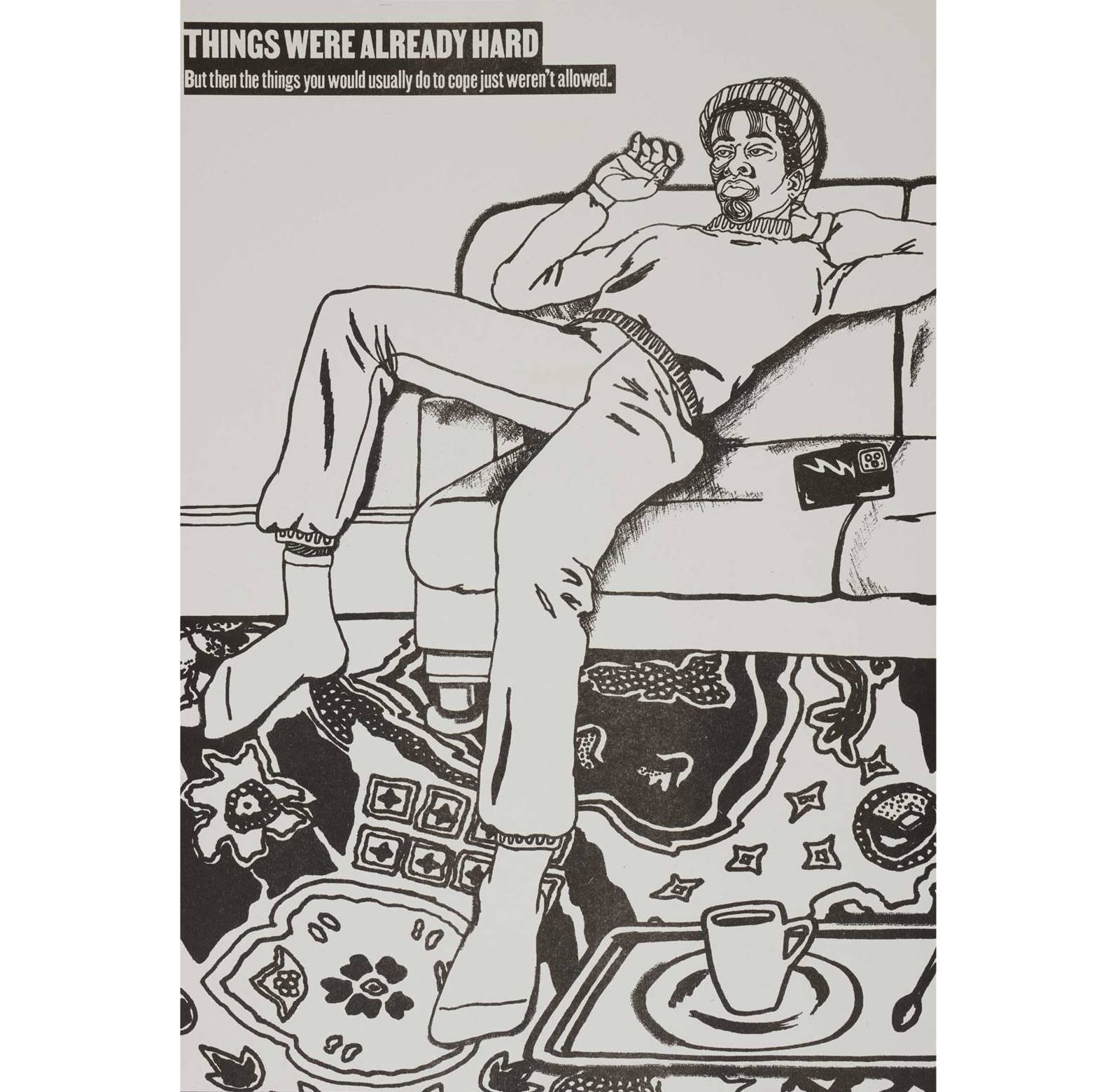 STEPHEN: “I experienced four deaths during the period of March 2020 up to September 2021. Which has been…the height of the COVID-19 epidemic worldwide. It was so overwhelming for everybody. But for me, I could not cope with the news — the shocking statistics — that was overexposing individuals, expecting us to process it. It was undigestible.”

CATHERINE: “My sons are all Black males…this illustration is showing how they feel. Because not very often do you see Black males being portrayed in a setting like this. And they are human too, in that, they have sadness and grief and hurt, like everybody else. I see somebody…that is so hurt and can’t show it, because society doesn’t allow them to show that…. They can be wounded…in the heart area. And it’s okay to be sad and cry.” 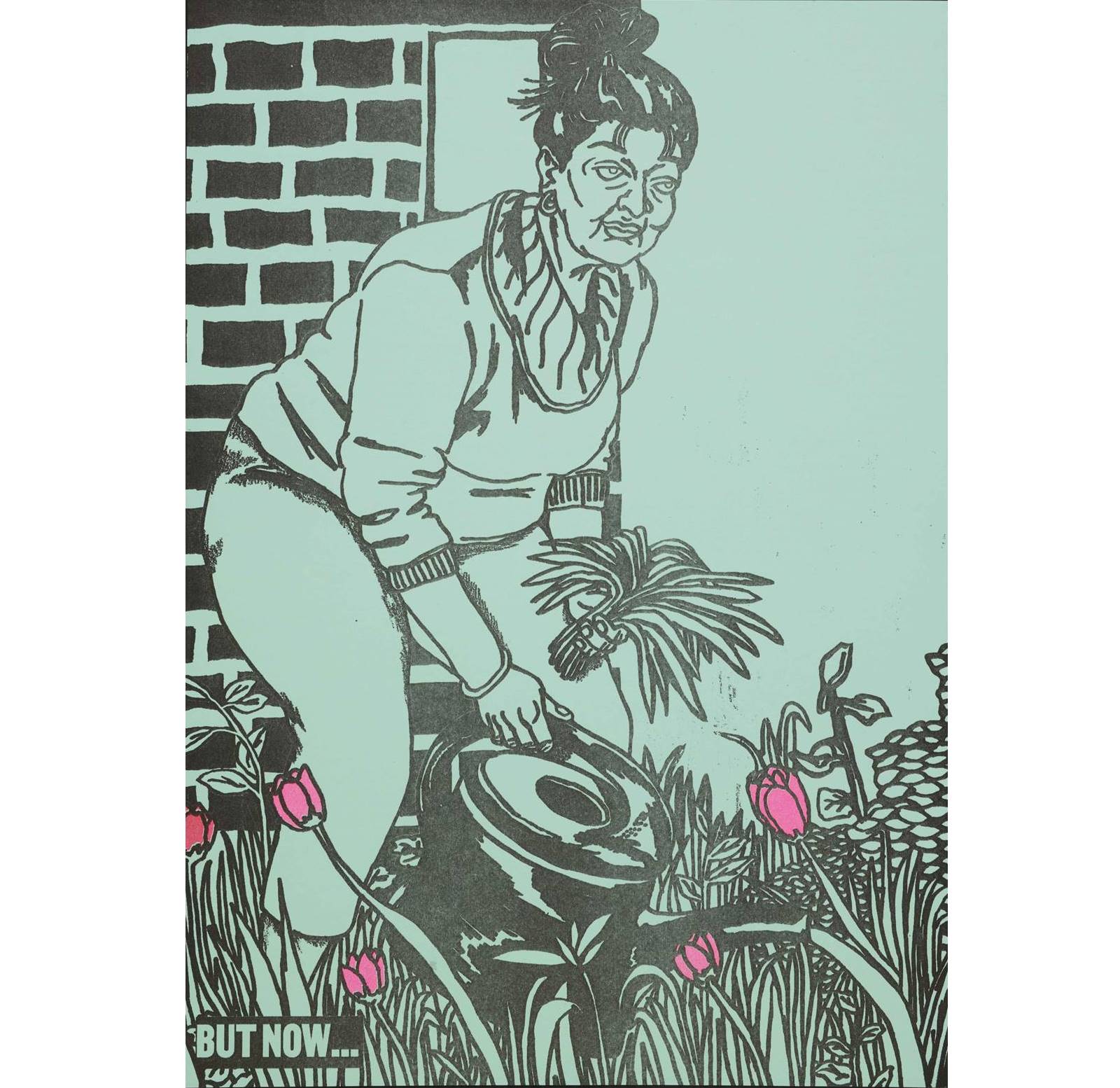 CHLOE: “I feel like I’m in that stage of ‘but now’; of being able to enjoy myself again and smile and laugh and find joy in looking at photos and videos rather than be sad about it all the time. And the pop of colour — I guess I see it as like me, my personality, coming back through where it was lost for such a long time.”

FAY: “The (six) pictures…it’s like a life cycle of somebody who has come out the other side of COVID after experiencing all those different changes to their life and then having to start again. But now — but now what? A new life…. We re-join life again.”

SUE: “(The series of illustrations) sends a message of — there is hope. Despite all the difficulties, despite all the dark moments, there is always hope at the end. And nothing ever stays the same forever. It doesn’t matter how bad it is, it will come to an end.”

Telling Stories is one strand of the Museum of London’s Collecting COVID project, documenting the experiences of Londoners during the COVID-19 pandemic.

The artwork was commissioned by the Museum of London and supported using public funding by Arts Council England.