Councillor Philip Normal’s official appointment as Mayor of Lambeth had been scheduled for 22 April 2020. Under ‘normal’ circumstances, the new mayor would have been invested during an in-person ceremony with an elaborate ‘chain’ — a long necklace, which is part of a group of objects that denote the mayor’s status and office. This was not to be as the nation went into lockdown in March 2020 to curb the spread of the COVID-19 virus. It was decided to hold a virtual ceremony, something we have become used to over the course of the pandemic, but which was rather a new thing at the time. 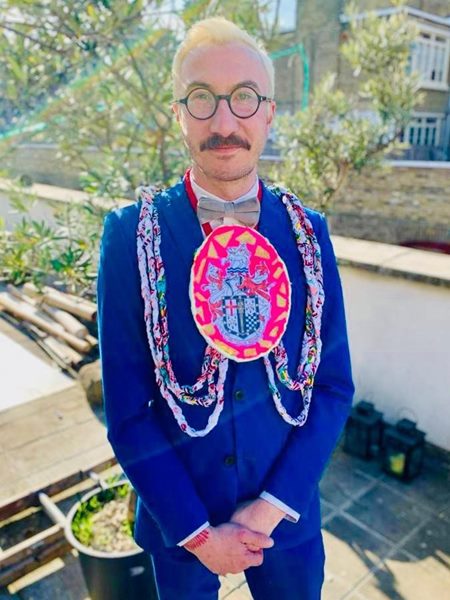 Philip Normal’s appointment was momentous. He was the UK’s first openly HIV+ mayor, having been councillor for the Oval Ward in Lambeth since May 2018. He is well known as an LGBTQ+ activist and ambassador for HIV awareness. Normal also owns a popular shop in Brixton Village, where he sells clothes and accessories.

Being unable to wear the ‘real’ mayoral chain, Normal made his own out of plaited t-shirt fabric, card, paint and a helping of duct tape, the staple of DIY-ers. Like the real thing, Normal’s self-made chain displays Lambeth’s coat of arms painted within a fluorescent pink oval with the words 'Spectemur Agendo’, meaning ‘Let us be judged by our acts'.

The event was widely reported upon and caught the eye of the museum’s Collecting COVID team, which had only just started to look for objects to represent the effects of the pandemic on the capital. We also liked that the object relates to other mayoral insignia, signs of rank and office, in the Museum of London’s collection, such as badgesand staffs of office, as well as a humorous take on mayoral chains by the London jewellery company Tatty Devine.

We approached Normal to ask whether we could acquire the object for our collection, to showcase Londoner’s ingenuity during times of crisis, and also to inform future generations about the stigma still faced by many living with HIV.

The self-made mayoral chain was finally formally added to the museum’s collection in February 2021 as part of the Collecting COVID project, which so far has brought together more than 1,200 individual objects.

In January 2022, it came to light that Philip Normal had used offensive and discriminatory language on social media in the past, which led to his resignation as councillor.