During 1984 and 1988 excavations were carried out in Bermondsey at the site of the medieval Cluniac priory St Saviour located on the south side of the Thames almost directly opposite the famous and infamous Tower of London. St Saviours was founded in c.1089 by William Rufus on the former royal manor of Bermondsey (Steele, 1988).

A total of 201 individuals were analysed from Bermondsey Abbey and entered on to the WORD database.

The Cluniac order was a medieval organisation of Benedictines centred at the abbey of Cluny in France. At its height it was a major religious force in Europe with nearly a thousand houses throughout Europe who all showed obedience to the abbot at Cluny (Lawrence, 1984).

There were some burials that predated 1089 but what was identified as the ‘Monks’ cemetery (Area OA2) directly overlay these earlier burials. The earliest recorded named burial in this area was of Hadwise who died in 1099. Burials continued in the cemetery until the Dissolution of the monasteries in 1538.

The layout and periods of deposition were distinguished through rows that varied in alignment relating to the changes of the church buildings. The burials were all of a standard Christian style. Within the Monks cemetery nineteen stone and mortar cist burials were found which, was a form of burial that continued throughout the duration of the priory. One of these was located in the Chapel (Building.2) and a ‘pillow’ burial was located in Chapel A.

Preservation varied but was generally quite good and completeness for the majority of males was very good. The completeness of those adults not possible to assess was extremely poor. 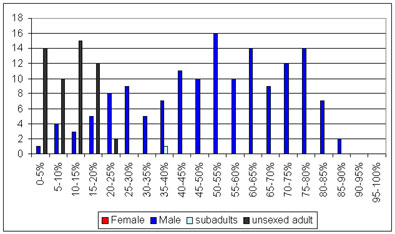 Of the 201 skeletons analysed there were 200 adults and one sub adult. Of these individuals there were 147 males, 2 individuals of indeterminate sex and 51 where it was not possible to establish sex estimation. Clearly there is a marked biased towards males but this biased has also been found at other monastic sites and therefore should not be perceived as unusual. The majority of adults died in the 36-45 year age category with the one sub adult in the 12 -17 year age category (fig 2 & 3). 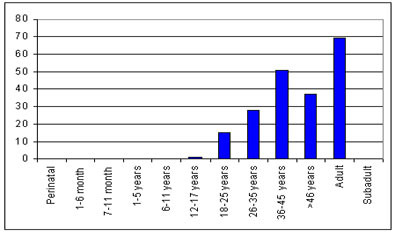 The stature estimates were consistent for the period (Roberts and Cox 2003, 248) but the maximum estimates did appear quite high.

The individuals from Bermondsey Abbey so far reflect a pathological profile not that unexpected of the medieval period; however, there were some interesting aspects to note. Most noticeable was the high frequency of trauma in the incidence of healed fractures at 10% and Blunt force trauma at 2%, indications perhaps of a more urban environment.

The observation of button osteomas also seemed to have a high prevalence at 3.5%. Dental wear was in some instances markedly pronounced and could possibly be seen not just as the result of coarse food stuff but possibly an indication of the teeth being used as a tool. Perhaps not so surprising was the presence of several cases of DISH and non specific periosteal reactions having a high prevalence as well as osteoarthritis.

Table 5 provides a crude distribution of vertebral pathologies so far recorded in the adult population. Osteophytic lipping and Schmorl’s nodes were most frequently observed and also a high rate of osteoarthritis.

The dental pathologies so far revealed a perhaps not unexpected high rate of calculus but there was a noticeably high prevalence of hypoplasia .This could be attributable to many factors but may be an indication of early life stresses or periods of malnourishment.

The individuals analysed from the monks cemetery provided some interesting results and would lend themselves to further research as an individual group but also with comparable monastic and medieval sites such as the Royal Mint and Merton Priory and those outside London.

The assemblage would provide a good opportunity for further research into the monastic way of life with comparisons between the different orders and possibly even attempt to identify if any of the individuals came from France.

As yet it would appear that no other Cluniac burial ground of such comparable size has been excavated and so would highlight further their potential for interesting research. Recently noted are renewed excavations in Bermondsey perhaps revealing more burials and comparable skeletal material further enhancing knowledge of the site and monastic order.