During two phases of excavations at 54-56 Carter Lane, 1-3 Pilgrim Street and 25-27 Ludgate Hill in 1987 and 1988 a substantial part of the medieval cemetery of London Blackfriars was revealed.

From the excavation and documented evidence it was believed that a Norman Fortress originally stood on the site and that the Dominicans acquired the land in 1274 or 1276 as a stone quarry, and founded the friary nearby known as London Blackfriars (Watson, 1990).

The burials revealed were identified to date from the 13th century to the 16th century but with the majority of those uncovered from associated finds attributed to the 13th and 14th century. There was evidence for wooden coffins, grave linings and one individual was buried in a lead coffin.

The full extent of the cemetery was not known but the infilled southern ditch, north of the church was known to have became the friary cemetery (Watson 1987). The burials excavated from this area were of a standard Christian style apart from the identification of a mass grave that contained 13 individuals of mixed age and sex, that appeared to have been interred at the same time and may have been from an epidemic (Keily, 1989). A total of 58 skeletons were excavated of whom 57 were analysed.

The cemetery and the friary were no longer used after 1538 and the Dissolution of the monasteries under Henry VIII.

Variations in the method of recording: Dental pathology the option of 0 and 9 was not implemented. Joints were recorded as present, no further grading was applied or four digit array. Non metrics were not recorded for sub adults.

The skeletal preservation for the majority of the skeletons was good, whilst completeness varied amongst the adults, with a high degree of truncation and with the sub adults being the least complete (fig 1). 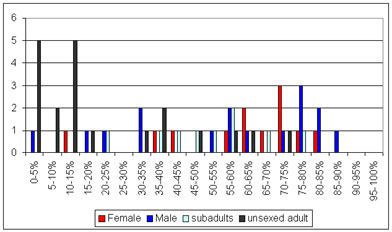 There were no known named individuals identified within this assemblage but probably the more interesting feature was the identification of the mass grave with 13 individuals (6 sub adults, 3 males, 2 females and 2 unassigned adults). 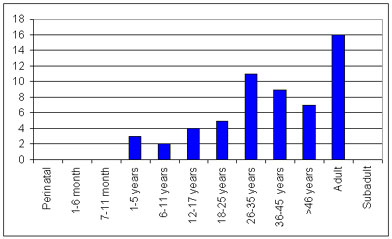 There were slightly more males than females, with the age ranges amongst them being fairly similar but with more males in the age category 26-35 years old. For the majority of individuals, however, it was not possible to assess age. There were only nine sub adults in the total assemblage and six of these were from the mass grave. No sub adults were aged at below one years old.

Stature estimation was only possible for five individuals and the ranges appeared consistent with the average stature identified for the time period (Roberts and Cox 2003, 248)

The London Blackfriars population seemingly reflected a fairly normal pathological profile with a variety of conditions but nothing particularly noteworthy. Perhaps not surprisingly the most frequently observed pathological responses were non specific periosteal reactions and indications of degenerative joint disease and osteoarthritis, which were evenly distributed amongst the males, females and unassigned adults. Interestingly with trauma the healed fractures observed were not identified in the males. As the individuals were not predominantly an older population certain diseases more readily associated with the elderly were not prevalent with only one case of DISH and osteoporosis being noted.

Table 5 provides a crude distribution of vertebral pathologies in the adult population. These were consistently higher in the males particularly Schmorl’s nodes and osteophytic marginal lipping.

The dental health of the individuals in the friary cemetery from Table 6 were all markedly affected by calculus with all adults affected to some degree and two thirds of the sub adults. Carious lesions were predominantly identified in the adult population with females and males affected similarly. Hypoplasia was not uncommon amongst the individuals but was higher in the males as was periodontal disease.

Table 6 Distribution of dental pathology in sub aduls and adults

The individuals interred in the London Blackfriars medieval cemetery were an interesting if relatively small assemblage and included from documentary sources local merchants and tradesmen (Watson, 1990).

The time period for the burials encompassed a significant time period with the Great Famine and the catastrophic effects of the Black Death, which may perhaps be reflected in the presence of the mass grave. Comparisons between other medieval and monastic sites such as the Royal Mint, Merton Priory and Bermondsey Abbey could provide interesting results.