Excavations on the site of the Augustinian Priory of St. Mary Merton, were undertaken by the DGLA between 1977 and 1983, with MoLAS also excavating later (1986 -1988). The site recorded a total of 738 burials, clustered in 4 main areas. All burial areas are divided into four phases, dating from AD1117 to 1538, covering the full period of monastic occupation on-site.

The majority of burials were of the standard late medieval style (i.e. supine, with head to the west and feet to the east), although prone burials were reported also. Stone cist burials, single and multiple inhumations were recorded, whilst burial treatment included the use of monolithic stone coffins and lining of the grave base with grey ash and charcoal.

Grave goods included a pendant lamp, chalices, a paten and gold thread, a copper alloy buckle and a leather strap thought to be a hernia belt worn by 1 individual.

Preservation and completeness was good, with approximately half of the individuals recovered represented by 50% of skeleton or more. No obvious difference was observed between preservation of males and females, although the female sample was much smaller. Unsexed adults showed a marked increase in number of those represented by less than 30%, suggesting lack of completeness inhibited analysis rather than preservation state. 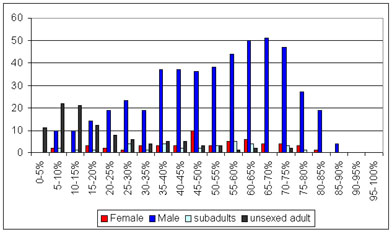 The age and sex profile of the cemetery population appears to fit the model for a monastic site very well. The vast majority of individuals were adults, with almost half of those recovered aged over 35 years. Of the sexed adults, over 90% were assessed as male. Subadults were present, but they represented less than 5% of all individuals, with most being adolescents. There were no subadults present below the age of 1 year. 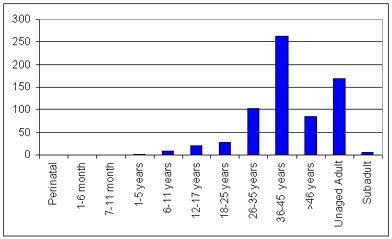 The average stature for males at Merton fits well with those recorded for medieval Londoners (Werner, 1998) and for British males in the late-medieval period (Roberts & Cox, 2003). The average height for females was however, markedly greater at Merton in both cases.

14.3% of all individuals exhibited osteoarthritis in their joints, with females showing a higher rate than males (20.8% and 15.1% respectively).
DISH was observed in 6% of males, but was absent in females. Females exhibited a markedly higher rate of hyperostosis frontalis interna, (5.7%), more than double that observed in males.

Blunt force trauma was also more prevalent in females (3.8%) than in males (0.6%). There were three cases of surgical intervention, including a trepanation and one individual who appeared to have had a leather ‘hernia’ strap in place at the time of burial.

Over 25% of all adults exhibited vertebral osteoarthritis, with no major difference in rate between males and females. Over two thirds of all adults exhibited vertebral osteophytosis to some degree, with comparable rates between males and females (72.1 % and 62.5% respectively). Similar rates for all adults were exhibited for both intervertebral disease and Schmorl’s nodes (c.50%), with males exhibiting a markedly higher rate in the latter than females. Intervertebral fusion occurred in over 8% of adult males, while females exhibited a rate of just 2.1%.

There were no major differences between males and females, although the much smaller female sample exhibited a higher rate of periapical lesions than the more numerous males.

The current sample from Merton Priory represents a monastic cemetery population incorporating both monastic and lay individuals, with evidence for an integrated community.

There is good potential for research on topics including diet, status and the history of medicine in this period.

Further work at this site is likely to reveal the full extent of the cemeteries and additional burials that have not been included in this summary.