The Spital Square site, previously referred to as ‘St Mary Spital’ (Thomas et al. 1997) is situated on the northern side of Folgate Street in North East London. It was home to the Augustinian priory and hospital of St Mary Spital, of which it was one of the largest in Medieval England.

Serious excavation of the site was carried out between 1985 and 1989 by the Museum of London in preparation for redevelopment of the area (Thomas et al. 1997).

During this time a total of 126 human skeletons were recovered from four distinct sections of the site and were retained for analysis (Site codes: NRT85, NRF88, SPQ88 and SSQ88). For the purposes of this summary the data for all four sections has been grouped.

Nine skeletons (SSQ88) were recovered from the priory, dated 1197-1235. Although ten graves were identified during the excavation, one had only a small number of disarticulated bones suggesting a prior exhumation.

A total of 15 individuals (SPQ88) were recovered from the first phase of the infirmary hall/ chapel dating between 1280 and 1320.

A total of 102 sets of remains were recovered from the hospital cemetery, dated 1235-1280, and consisted of 54 (NRT85) individuals from the North section and 45 (NRF88) from the South. Although they were recovered during two separate excavations both sub groups can be linked archaeologically and osteologically. All the graves were aligned east-west.

Data entry for this site is ongoing.

Non-metrics and dental measurements were not recorded for sub adults on this site.

Overall the quality of the bone was good and the majority of individuals were more than 50% complete. 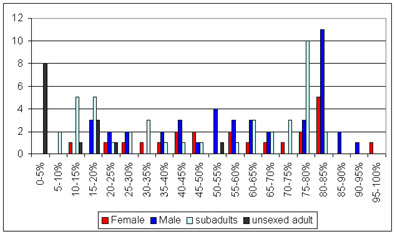 A total of 124 individuals have presently been analysed, comprising 43 males, 23 females and 42 sub-adults. Of all adults, the single largest group was the 36-45 year age category, accounting for 67% of the adult population. The combined male to female ratio for the site was almost 2:1 but was higher in the 18-25 (8:1) and 36-45 (9:1) categories, however, females outnumbered the males by 3:1 in the mature adult demographic.

There was an unusually high representation of sub-adults recovered from Spital Square, accounting for approximately one third of the burials. The majority died during adolescence; however, approximately 24% were aged between 6 and 11 at the time of death. 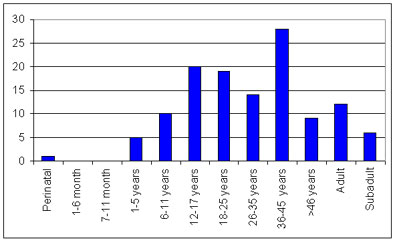 Stature, calculated using complete femora, indicated that both males and females were of average height when compared to individuals from other British medieval populations (Roberts and Cox).

The Spital-Square population reflected a typical medieval pathological pattern with high numbers of trauma and infection. 19.5% of the adult population suffered some form of trauma and although more individual cases were recorded among men, women had a higher prevalence of healed fractures. 17% of the adult population exhibited some form of infection, including 1 case of tuberculosis, while 14% of sub-adults had non-specific infections.

Of further interest is a case of Osgood-Shlatter's disease and a probable case of Keinbocks disease.

Vertebral pathology was consistently higher among females except in the case of schmorl’s nodes, of which there were almost double the prevalence in males.

Medieval Spital Square represents a stratified population from an early medieval Augustinian priory and hospital. This assemblage provides an ideal sample for comparative study with other British medieval populations and populations from continental hospitals of a similar period. Furthermore, this site may benefit from a more detailed analysis of the individual sub sections outlined above, particularly those pertaining to the infirmary cemetery.