The Church and graveyard of St Benet Sherehog, otherwise known as ‘1 Poultry’, was excavated by MOLAS between 1994 and 1996. The church was originally constructing in the 11th century in alignment with, but overlaying, the old Roman Road at Poultry. At the time it was a simple single-celled structure approximately 6.1m wide and 10.5m long.

Its size and alignment - slightly removed from contemporary buildings, led archaeologists to surmise that it was a private chapel until its expansion and realignment in the 13th century. It remained in use until its destruction during the great fire of London in 1666.

Of the 274 burials excavated from the site, of which 270 were retained for analysis, only 39 were dated to the medieval period. The burials were aligned roughly east-west with the heads towards the west end of the graves.

The Post-medieval burials have been analysed separately. Please refer to ‘Post-medieval St-Benet Sherehog’ for more information.

Non metrics and Dental measurements were not recorded for sub adults on this site.

Although the overall bone quality was good, the skeletal completeness was generally poor. The majority of the skeletons were less than 25% intact. 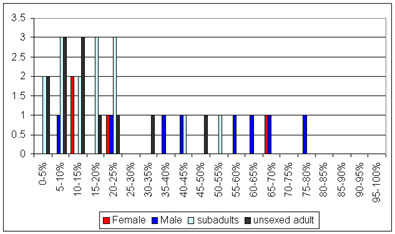 Of the 39 individuals recovered there were 24 adults (8 males and 4 females) and 15 sub adults. The 35-46 years demographic was the single largest adult group represented and it had the highest male to female ratio, with 2.5 males to each female. One third of all children could not be aged due to poor preservation, however, there were 3 perinatal deaths and 4 children aged 6-11. 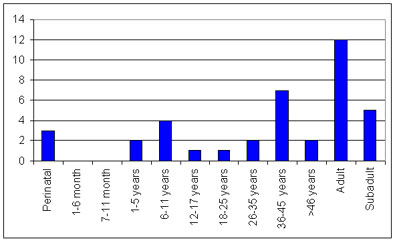 Non specific infections and trauma are perhaps two of the most prevalent pathologies represented in medieval populations. In the case of St Benet Sherehog, 13% of the recovered individuals exhibited signs of non specific infections and 8% had some form of accidental trauma. Other diseases are perhaps under represented; however, this can most likely be attributed to the small sample size.

Table 5 provides a crude distribution of adult vertebral pathology however; the sample size is statistically insignificant.

Table 6 provides a crude distribution for dental pathology however; the sample size is statistically insignificant.

The St Benet Sherehog site represents a Late Medieval population within the City of London. Due to the small sample size research potential is limited as statistical significance is low. However, it has limited potential for comparison with other medieval sites or could be used in conjunction with the ‘Post-Medieval St Benet Sherehog’ site to study the development of one parish over two distinct areas.