The site that once was the Royal Mint was excavated between 1986-1988. The excavation recorded large parts of a medieval burial ground from two separate medieval periods.

One area was a large burial ground associated with the Cistercian abbey of St Mary Graces (1350-1540). It covered a substantial area and revealed 420 burials that were clustered in two groups referred to as the Churchyard and Abbey Buildings. From the 420 burials 389 individuals were analysed.

The inhumations within this area were north of the church and extended westwards and were lay burials overlying the earlier western catastrophe cemetery. The burials followed a standard medieval Christian burial style and appeared to have no particular differentiation in social status. The western part of this cemetery went out of use in 1405.

The abbey precinct dated from 1353-1538 and revealed inhumations in a number of locations. Within the church the intramural burials were mainly concentrated in the nave but were also recovered from the choir, chancel, chapels, porch and Cloister. The alignment of the burials related to the church and were standard medieval Christian style. Coffins were found as was a chalk/lime lined coffin.

Status would no doubt have played a part in relation to the intramural burials. This is perhaps most significantly and somewhat poignantly seen with the named individual Sir Simon Burley. He was a high ranking and most influential man in the court of King Richard II who was decapitated in 1388 for treason and whose remains were buried in the Presbytery of St Mary Graces.

Variations in the method of recording: Dental pathology the option of 0 and 9 was not implemented. Joints were recorded as present =1 in the field or null the field being blank, no further grading was applied or four digit array. Non metrics were not recorded for sub adults.

Preservation varied across the burial ground but predominantly was not very good. Skeletal completeness generally was quite poor with the majority of sub adults markedly affected (fig 1). 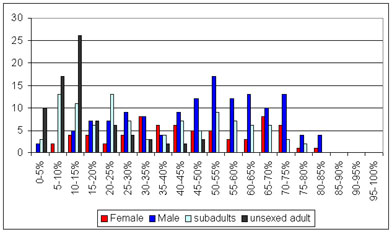 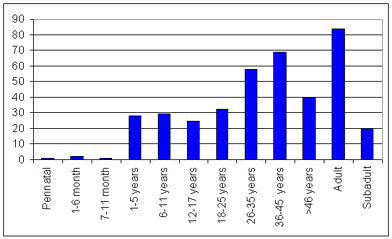 The overall male to female ratio was 2:1 with a fairly even distribution through the age categories. The majority of adults died in the age category 35-46 years which was also the same for the males. For females the slightly higher number was in the 26-35 year age category. For sub adults there were only five aged below 1 years old and there was an even spread throughout the age categories spanning 1 to 17 years old.

The pathological conditions observed in the population were varied including a case of possible leprosy and interestingly one case of possible syphilis. As with other medieval populations the highest prevalence was observed in non specific periosteal responses and degenerative joint disease, particularly osteoarthritis. The three cases of tuberculosis could perhaps be an indication of the early stages of a move towards urbanisation. Trauma was observed predominantly in the males with healed fractures.

Table 5 provides a crude distribution of vertebral pathology. The males were affected more than the females and particularly with osteophytic marginal lipping and Schmorl’s nodes.

Dental health for the individuals was fairly typical for a medieval population but there was a noticeably high incidence of hypoplasia in the adults, which has been associated with many factors but perhaps for this population and time period could be associated with the Great Famine. Calculus affected all individuals to some degree but the males seemingly were more affected by periodontitis.

The individuals from the churchyard and abbey buildings were interesting as discrete assemblages in their own right but would also be interesting for comparative studies with other monastic sites such as Merton Priory and Bermondsey Abbey and also post medieval sites. Comparison with the closely associated catastrophe Black Death cemetery (East Smithfield) should be considered as a primary comparative assemblage.