During the Second World War Chelsea Old church was completely destroyed by bombings. The church was rebuilt to its former glory in the 1950s.

In the 1960s further building work took place, which caused part of the 18-19th century churchyard to be exhumed and reburied (Russett and Pocock 2004).

In 2000 further excavations were carried out by Museum of London Archaeological Services in advance of further development. A total of 290 skeletons were exhumed of which 198 individuals were analysed. Two burial vaults and two brick lined graves were uncovered but the majority were earth cut stacked graves. The coffins were mainly wooden, some with lead lining.

The site was well preserved with a good overall completeness. The Sub adults were the least complete (fig.1), and based on the biographical data also believed to be underrepresented in the skeletal assemblage (Cowie et al. 2008). 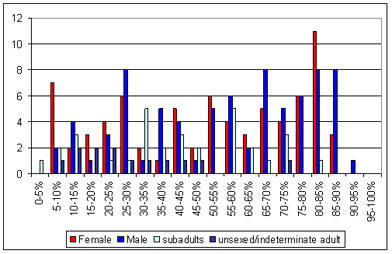 The sex profile of the adults revealed that a majority lived into old age, which was also reflected in the biographical data, where 15 of the 25 individuals died over the age of 60 (Cowie et al 2008). The ratio of males to females in the younger age category was 1:1.8, which is perhaps a reflection of how perilous child birth was. 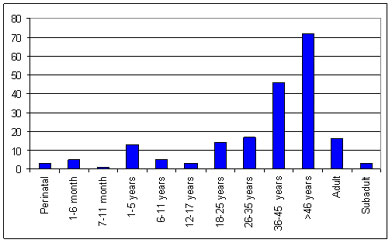 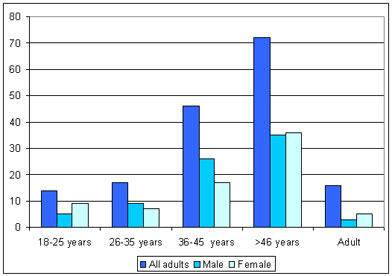 The Chelsea population reflect a typical post medieval disease pattern. Conditions often caused by excess in the diet, such as DISH and Gout were noted. Interestingly, only a single very tentative case of veneral syphilis was found. Trauma appeared to be commonplace in particular amongst the males, who had almost twice the rate of fractures than the females. Amongst the sub adults, metabolic disorders were the most frequent pathology.

Conditions such as residual rickets and osteomalacia in adults were likewise seen at a relatively high rate, suggesting that metabolic disorders were rife through the generations. The most common disease of the elderly was osteoarthritis in both males and females, whilst osteoporosis was seen mainly in the female population.

Table 5 provides a crude distribution of vertebral pathologies in the adult population. These were almost consistently higher in the males, particularly Schmorl’s nodes.

Dental health of the Chelsea population proved typical for a post medieval population. The rate of ante mortem tooth loss and caries was high (Cowie et.al 2008). The figures shown on Table 6 indicated that females suffered a higher rate of caries and periapical lesions than males. Enamel hypoplastic defects were not uncommon and in some individuals possible lines of arrested growth were seen on the roots of the dentition.

The Chelsea Old church individuals represent a population who lived in the outskirts and more rural areas of London during the 18-19th century, offering a unique opportunity to compare the effects of living in the country with those living in the population dense urban areas. The cemetery was considered to hold mainly high status individuals and thereby offer an excellent comparative dataset to less affluent cemeteries such as St Brides Lower churchyard and Redcross Way.

Named individuals are only rarely maintained as an archival collection and considered invaluable in enhancing osteological research methods.