Excavations carried out by MoLAS in 1992 on the site of Cross Bones Cemetery, recorded part of a post-medieval cemetery to the west of Redcross Way in Southwark. 148 inhumations were recorded and are thought to date to the last 50 years of use of the cemetery approximately from 1800 to 1853 when the cemetery was closed (Miles, 1993).

The Cross Bones burial ground served the poor of the parish of St. Saviour’s, Southwark, but the ground is thought to have originally been established at least as early as the 17th century, as a single women’s (prostitutes’) cemetery. By 1769, it had become a paupers cemetery and remained so until its closure in 1853 (Brickley & Miles, 1999).

All burials were supine and aligned along an east-west axis. All incorporated coffins, with three inhumations also yielding remains of clothes including boots, trousers and a shirt; and shrouds with two subadults. Coffin plates were present with some coffins, but none were able to provide names for individuals. 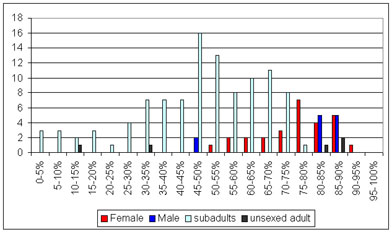 Over one third of the sample consists of perinatal individuals, with individuals under 1 year of age making up a further 11%, indicating a high infant mortality rate; however, Brickley and Miles (1999) suggest the sampling strategy may well have influenced the ratio of subadults to adults recovered. 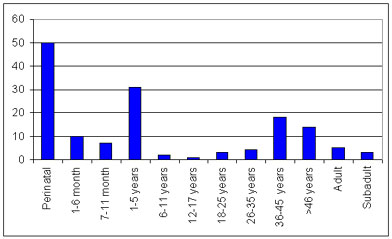 No measurements were able to be made in order to estimate stature for either males or females.

Metabolic conditions were observed including scurvy (14.9%) and rickets (7.4%). A prevalence rate of 8.1% was observed for healed fractures in the total sample, with males exhibiting a much greater rate (50%) than females (14.8%). Evidence of peri-mortem surgical intervention was observed in three individuals.

Osteoarthritis was observed in the spines of 48.8% of adult individuals, with males exhibiting a moderately higher rate (58.3%) than females. All adult individuals exhibited vertebral osteophytosis to some degree. The rate of intervertebral disease was very high with females exhibiting a greater prevalence (96.3%) than males (83.3%). Prevalence rates for Schmorl’s nodes were also high (approximately 75%), with vertebral fusion significant (c.15%) and no major difference between males and females with either.

87.2% of all adults exhibited dental caries, with similar rates for both males (83.3%) and females (88%), while subadults showed a prevalence of 22.7%. Calculus was widespread with 92.3% of adults exhibiting evidence of its deposition.

Similar rates were observed for periodontitis for males and females. 91.7% of males exhibited dental enamel hypoplasia, while females showed a somewhat lower rate of 72%; subadults showed an even lower rate of 38.6%, although this rate may be biased by the very young age of many of these individuals. Adult females exhibited a prevalence of 40% for periapical lesions, compared to 33.3% for males.

The current sample from the Cross Bones burial ground represents a post medieval population from an area with a very poor socio-economic environment.

There is significant potential for research incorporating historical evidence pertaining to the physical and social environment with evidence from the human remains.

Future excavations on the site of the burial ground are likely to produce more human remains and provide further evidence with which to describe a more vivid picture of a deprived area within the post medieval period.