The parish church of St Botolph, Billingsgate, was destroyed in the Great Fire of London 1666. A fifteenth-century chapel within the foundations of the church was excavated at the Billingsgate Market site in 1982 by the Museum of London Department of Urban Archaeology. About 50 post-medieval burials were excavated.

Five of them had hair present on the head. There was also a sealed 15th-century vault, containing the remains of a man and a woman, but these are not included in the study presented here.

Degree of completeness: information is pending until a more representative sample size has been recorded. 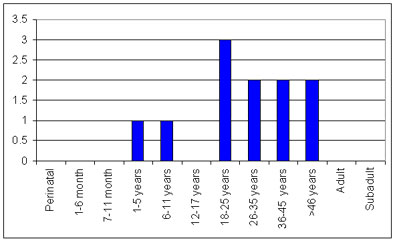 No females had measurable bones for stature calculation (Table 4).

Few pathological conditions have yet been recorded for this small sample.This will be updated in due course.

This section is in course of development (further recording pending).

Too few skeletons have been recorded from this site for meaningful statistical results to be quoted. The site will be updated shortly.