St. Bride's Lower Cemetery, 75-82 Farringdon Street, forms part of the population who lived in the parish of St. Bride's during the 17th - 19th centuries.

The cemetery was the result of overcrowding of the actual churchyard linked to St. Bride's church, Fleet Street and believed to date mainly from the late 18th -19th century (1770-1849) (Miles & Conheeney 2005).

A total of 606 individuals were excavated with 544 available for analysis. The majority were orientated east-west, with only 30 orientated north south. Most were recorded as having been buried in wooden coffins.

The individuals were recovered from two areas; the vault with 47 individuals and the remaining 497 individuals from the open yard. The burials were densely packed and it was estimated that the skeletal assemblage available for analysis represented approximately 50% of the cemetery population.

The cemetery most likely contained individuals from Bridewell workhouse and Fleet prison, which were located nearby. The majority of the burials from the cemetery were of low socioeconomic status.

The population is well documented through the parish records, which provide detailed information of the individuals and their cause of death, however, the cemetery, being of low status, had very few coffin plates present.

The preservation of the skeletal remains was excellent with 95% in good condition (table 1). The skeletal completeness was likewise excellent. 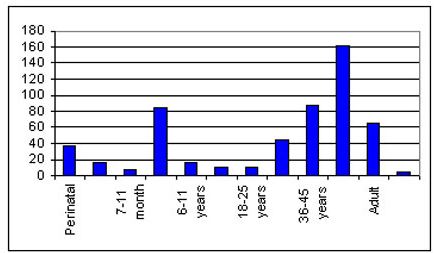 Child mortality was high and overall 32% of the population did not survive into adulthood and 85% of all children died before the age of 5 years (figure 2). 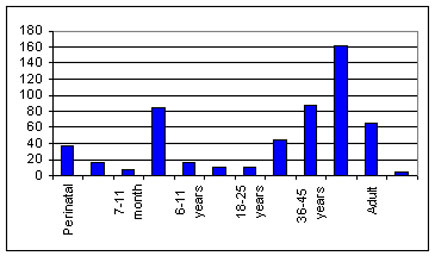 Of the 544 individuals recorded 65.6% had one or more pathological condition recorded (see table below). 40% of the subadults had recorded pathologies. Most commonly seen were metabolic disorders such as rickets, in particular active rickets mainly noted in infants. Osteolomalacia, rarely seen in surviving archaeological assemblages, was noted in two individuals. Trauma was very common, in particular rib fractures and nasal fractures.

A number of neonates and infants had a condition suggested to be Langerhans Cell (Hystiocytosis X), expressed a rounded penetrating lesions in the skull with endocranial bevelled edges and non-sclerotic margins. The sheer number of infants with this condition (4%) however suggest that these changes may relate to another much more common infectious disease such as tuberculosis, though this is yet to be researched.

The same conditions have been noted in other post medieval London sites such as Cross Bones burial ground and St Benet Sherhog, none were noted in subadults from any other period.

Surgical intervention was observed in 4.2% of all individuals. The majority were craniotomies performed on adults, though some also had evidence of autopsies on the ribs and vertebrae. A single amputation was that of a distal first phalange of the hand and more likely to be accidental than surgical.

Vertebral degenerative pathology was recorded in the adult population. The prevalence of osteoarthritis was almost equal in males and females, whilst conditions such as Schmorl’s nodes, known to be caused by strain and load bearing, was over twice as common in males than females (table 5).

A total of 14 males and two females also displayed pipe facets in the anterior dentition, marked as a half circles on mainly the lateral incisors and canines. One male [1716] had a gold filling in a first maxillary molar.

The lower St Brides churchyard is one of the largest recorded post medieval populations in London. Their low socioeconomic status and well documented background makes this population ideal for comparative social studies between osteological assemblages.

The St Brides Crypt was excavated in 1958 and forms part of the same parish representing individuals of higher socioeconomic status than the lower St Brides individuals (Scheuer 1998). These higher status individuals are not curated by the museum of London and do therefore not form part of the database.