The present parish church of St Marylebone, Marylebone Road, Westminster was built by Thomas Hardwick in 1817.

From 1400, a previous church stood to the south of this, adjacent to Marylebone High Street. This was replaced in 1741–2 by a small brick church which served an expanding and wealthy population on into the 19th century. In the 1930s the area was used as a playground for the St Marylebone Church of England School for Girls.

The church was demolished in 1949 and a garden of rest was laid out on the eastern part of the site.

Approximately 20% of the total development was excavated, the rest subject to a watching brief. A total of 350 burials in wooden coffins and 22 lead coffins were archaeologically recorded. Four vaults were recorded in the watching brief. Eight named individuals, identified from coffin plates, were available for osteological examination.

The coffin types, coffin furniture and the items with which some individuals were interred have been catalogued and compared with other evidence of the period. There was a high incidence of documentation (particularly wills) relating to those buried in the cemetery which ties in with the status of the inhabitants of Marylebone (Miles et al in prep).

Skeletons from the 2004 excavations (MBH04) were reburied following analysis.

When calculating stature, the complete skeletal element giving the most accurate estimate was used. All other recording followed the Museum Group method statement.

Just 28 individuals (9%) were poorly preserved, a reflection of the date of the assemblage and the coffined burial conditions (Table 1). 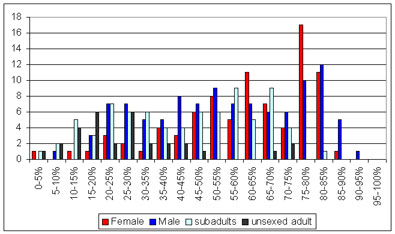 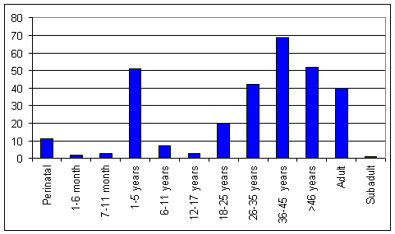 Whilst there was a male peak age at death of 36–45 years, the female peak fell in the oldest age category. In the younger adult age groups, female deaths outnumbered those of males, which may reflect the perils of childbirth. While half the adults with biographic data were under-aged, the chronology of age at death was generally correct: the oldest adults were placed in the oldest osteological age group, while adults in later middle age were placed in groups under 46 years.

It was anticipated that as a higher status group, St Marylebone would have a taller than average adult stature. Mean height and the level of sexual dimorphism were similar to those found at other sites within and beyond London, indicating that status is not reflected in adult height.

Specific infections included a young adult male with leprosy: one of only two cases noted from post-medieval archaeological excavations in Britain. His right foot had been surgically amputated at the ankle. A male pipe-smoker, was the only individual with venereal syphilis. A small number of cases of tuberculosis were present and an infant aged about 4 years at death, had skeletal changes consistent with a diagnosis of smallpox.

Males were more frequently affected by non-specific infections than females, and adults more often than children. New bone on the visceral surfaces of the ribs (in two cases associated with tuberculosis) sinusitis and chronic otitis media (middle ear infection) were all present.

The population prevalence of rickets at St Marylebone is higher than any other reported post-medieval cemetery to date and showed a peak at two years of age. There were no significant differences in prevalence of cribra orbitalia between males and females or adults and sub-adults.

Fracture prevalence was higher amongst males than females but this was not statistically significant. A robust 36–45-year-old male exhibited healed injuries which may have indicated long-term involvement in pugilism, a popular sport in the 18th century. Two adult males and three sub-adults had undergone autopsies.

Less common conditions included a 26-35 year old female with a simple (solitary or unicameral) bone cyst in the right ilium, three definite and one possible case of Paget’s disease. Seven women had rib deformities resulting from the long-term use of corsets or stays. Perhaps surprisingly, skeletal changes indicative of gout were observed in just three adults.

A significantly greater percentage of male than female vertebrae had evidence of disc herniation (Schmorl’s nodes), whilst women were more often affected by osteoarthritic changes. One male was affected by ankylosising spondylitis and extra-spinal osteoarthritis displayed a strong correlation with increasing age. Six males had suffered from D.I.S.H., whilst Charlotte Bampton Taylor and another elderly female had senile osteoporosis.

The true prevalence (by tooth) of ante-mortem tooth loss and caries was statistically higher in females than males. Patterns of root caries suggest some individuals were cleaning their teeth. More males than females were affected by periodontal disease, whilst hypoplasia affected both male and female teeth equally. Nine adults were edentulous.

Three elderly individuals were interred wearing false teeth and Sir Thomas Phillip Hampson had a grey metal filling in his left second maxillary molar and gold foil inserted into a chip in the right maxillary first incisor. The adjacent left incisor had been filed with a small cylindrical file or rasp. Damage to the right central incisor was caused during the filing of the left tooth. Most impressive was a maxillary denture constructed from rose gold and ivory.

A far smaller proportion of infants was buried at St Marylebone than would be expected from the Bills of Mortality. There is no reason to suspect sample bias, and low infant mortality would seem the most likely explanation. Once the high risk period of early childhood was overcome, the chances of reaching old age were relatively good.

The high prevalence of rickets is perhaps unexpected in a higher status group but it is suggested that this is a reflection of infant feeding practices and the fashionable practices of keeping children indoors and swaddling young infants.

Rates of degenerative joint disease (and a strong correlation with advanced age) suggest a relatively sedentary lifestyle. The low number of individuals with evidence of trauma supports the idea of a relatively risk-free life, though the experience was significantly different for some men. Fracture healing and the post-operative survival of the young leper indicate a population receiving medical care and sufficiently privileged to allow for long periods of recuperation.

A high prevalence of calculus suggests that a generally soft, refined diet was consumed and ante-mortem tooth loss and extremely high rates of caries indicate a cariogenic diet rich in starches and sugars.

The peripheral location of Marylebone and presumed status of the group would be expected to have had a positive influence on living conditions and the Marylebone assemblage shows a significantly lower rate of non-specific periostitis and osteitis than other contemporary sites.