During 1991 excavations were carried out on the site of New London Bridge House, Southwark (SE1) that covered part of a post medieval cemetery north of St Thomas’ Street. The site covered an area of approximately 9m x 3m, whilst the excavated area was 6m x 3m.

The earliest pit C [92] had individuals in eight layers with two rows of burials in each layer. The middle pit B [34] was truncated by a Victorian wall and the latest A [27] extended beyond the limits of the excavation to the west and truncated earlier pits. The indication that at times speedy burials took place was indicated by the absence of dirt between some of the layers suggesting that the burials were part of a catastrophe burial (Jones, 1991 and Dawson 2002).

Burials from the identified pits were aligned east-west and the presence of shroud pins indicated that many were buried in shrouds and coffins were represented by the presence of coffin nails.

Variations in the method of recording: Joints were recorded as present no further grading was applied or four digit array.

Preservation was relatively good but completeness was generally not very good with truncation in both adults and sub adults (fig1). 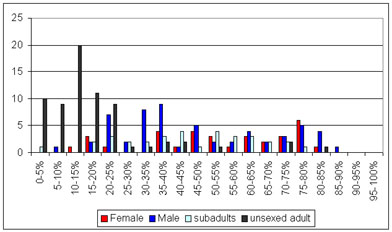 The demographic profile for the hospital cemetery site was interesting. The overall male to female ratio was 2:1 with the highest number of males dying in the age category 36-45 years whilst for females it was the younger age category of 18-25 years. This could perhaps be an indication of the risks faced by young females during childbirth. In the sub adults over half (9.3%) of those who survived the perils of early childhood died in the 12-17 age category. 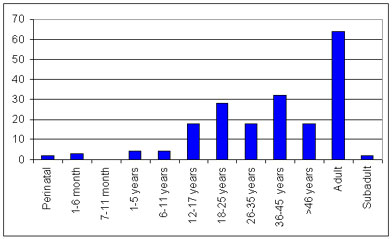 The pathological profile for a site identified as a hospital and post medieval would be expected to provide some interesting results and this site most certainly did. Infectious diseases were rife in the post medieval period, with syphilis becoming a significant health problem (Roberts and Cox 2003, 340). Most notably from this site was the extremely high prevalence of the treponemal disease syphilis.

Twenty five individuals (13%) were attributed to having syphilis, one of whom was a sub adult. The prevalence for non specific periosteal reactions was also very high at 35.2% and may in some instances have been an indicator and precursor to a specific infection. Trauma was observed in both males and females with two cases of blunt force trauma in males.

Table 5 provides a crude distribution of vertebral pathologies in the adult population. There was a similar pattern between the males and females apart from Schmorl’s nodes that were higher in males and IVD that was higher in females.

The general dental health of the individuals was seemingly typical of a post medieval population, with a similar pattern between the males and females. Table 6 indicates that high rates of caries, calculus and hypoplasia were observed in the adults and sub adults. Males were marginally more affected with periodontitis and females periapical lesions.

The individuals from this site highlighted the perils of health and low status in the post medieval period. The effects of urbanisation and susceptibility of low status individuals to infectious diseases was clearly apparent and particularly so from the high prevalence of syphilis. However, it should be considered that the pathological numbers may appear inflated from the very nature of the site being associated with a hospital that would have provided some sort of refuge for the poor and sick.

This site would provide excellent comparative data to other low status post medieval sites such as Red Cross Way but also as a contrast to higher status sites such as Chelsea Old Church. The high prevalence of syphilis would also lend itself to further studies in understanding of the disease and its epidemiology.