For the Crime Museum Uncovered exhibition, we had a unique opportunity to show objects from the Metropolitan Police collection. Evidence from over a century of criminal cases, from murder to international espionage, were going on public display for the first time ever. Jackie Keily explains how she tackled the daunting task. 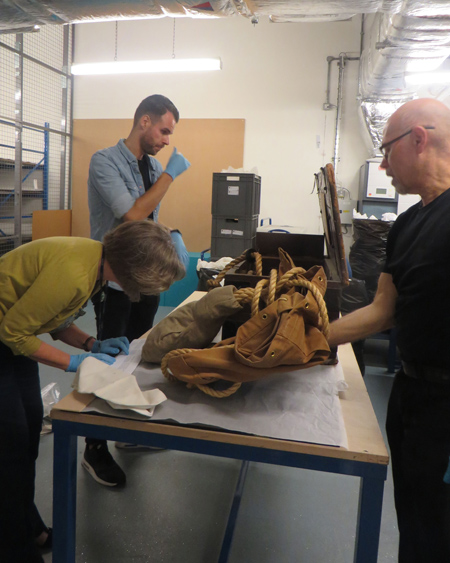 Jackie works with museum conservators and technicians to design display cases around the Crime Museum evidence.

There are many processes to putting on a major exhibition that if you don’t work in a museum you may not be aware of. One of these is how we decide on the design and layout of the showcases. I hope this blog will give you an insight into how we put together some of the display for The Crime Museum Uncovered exhibition.

At the Museum of London we use external designers to design our exhibitions and once they have been appointed they work out how the exhibition will look and feel. This is done in close consultation with the project team at the Museum (those members of staff who are working on the exhibition) and in particular with the curators and the conservation team. As part of this process the designers will produce drawings of all the cases in the exhibition, having been supplied with dimensions, descriptions and images of all the objects. 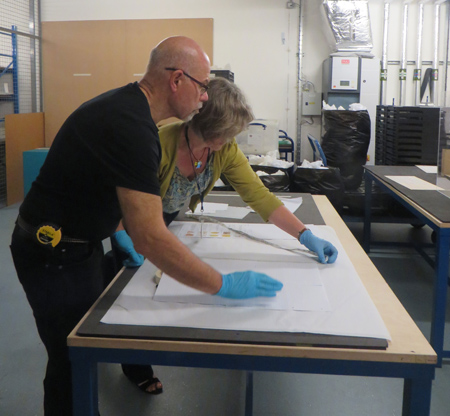 The case layout sessions are attended by the conservators, curator, the museum technicians and the project manager. The designers will also attend if they are available. At the Museum of London all of the mounts for the objects on display are made in-house by our wonderful team of technicians. Therefore it is really important that the technicians attend the layouts as they will be able to say whether or not something the designer may have suggested can actually happen! For example, can an object be mounted in a certain way? These discussions are very important and our conservators will also advise on the suitability, or not of the mounting and design, thinking about it from the safety and security of the object. 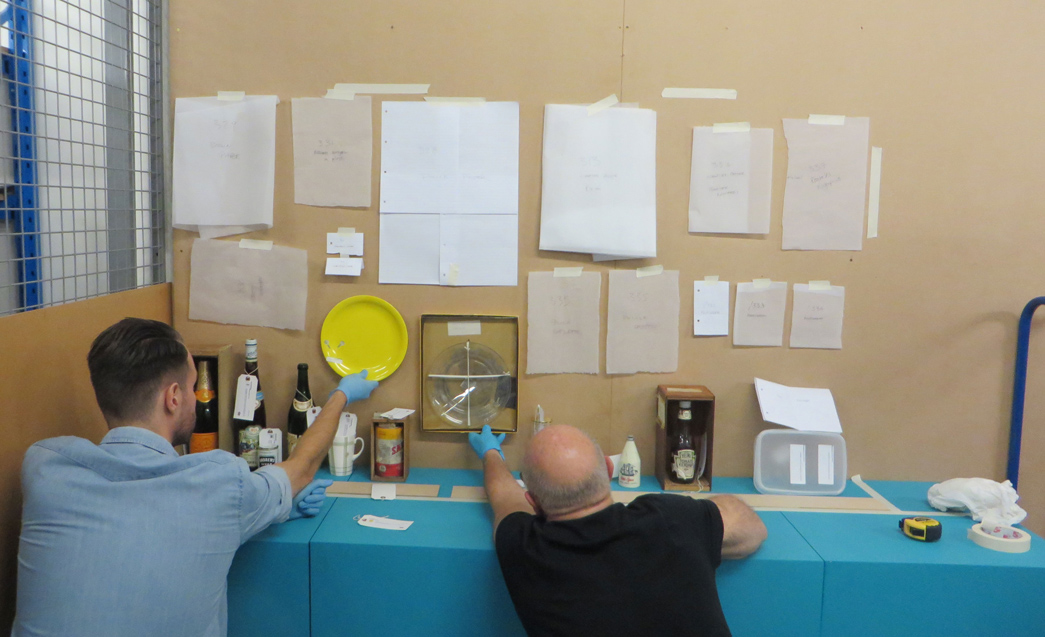 How best to show off the Great Train Robbery?

Jon Readman and Cliff Thomas try out different designs for a Crime case.

The image above shows the layout for the Great Train Robbery case. Our conservator, Jon Readman, and our Chief Technician, Cliff Thomas, have laid out some of the real objects that will be going into that case. However, some of the original objects, such as photographs and posters, have not been used for the layout. Instead we have used paper templates of the same size that we can easily tape to the wall and move around as required. The strips of tape on the wall indicate the size of the display case, so that we know how much space we have to utilise for displaying the objects. The board along the base at the front represents the caption rail, which will be a part of the final, finished case and which, again, we need to allow space for in this temporary layout.

Planning the Crime Museum Uncovered from design to display case.

Sometimes the layouts are exactly as they will look in the final exhibition display case. The pictures above show the layout for the execution box, which is on loan to the Crime Museum from Wandsworth Prison Museum, and then the final display of it in the exhibition. This execution box contained everything needed to hang condemned prisoners.

No plan is perfect

This display had to be reworked to make the exhibition display correctly.

However, sometimes objects will get moved when it comes to the final installation. The pictures below show an example of this. This display was changed because the objects in it were going to be visible from both sides of the case, as can be seen in the finished display in the exhibition. Here, a forensic pathologist's case, used to examine crime scenes, is displayed alongside the original "murder bag" dating to the late 1940s.