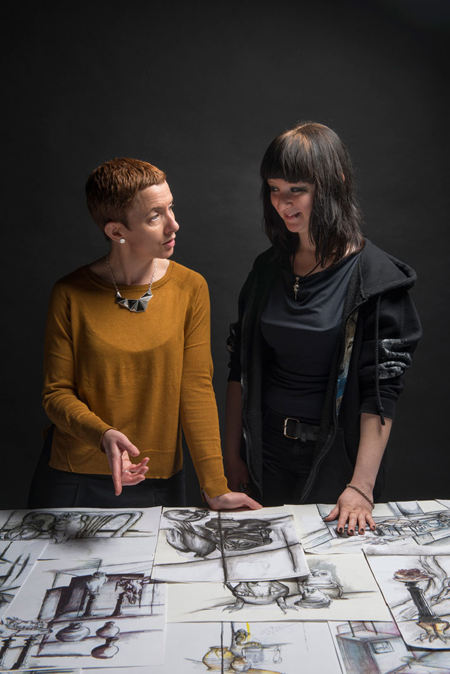 I'm studying for a degree in Illustration at the University for the Creative Arts, Farnham. As part of a project named Documentary, I was required to spend a couple of months sketching in a particular location. In September 2015, I approached Sarah Castle, the Higher Education Programme manager at the museum. Sarah was interested in seeing how illustration might allow us to look differently at the museum's collections, and what inventive interpretations might emerge. My project brief asked for work that was ‘visually unusual’, but Sarah also asked me to consider whether illustration can change our perception of objects.

Initially I spent a large portion of my time drawing in the galleries and collecting imagery that I would then develop into more ideas, before deciding on final designs that I felt would best represent or ‘document’ my time at the museum. I focused specifically on the London before London and Medieval London galleries. I also had the opportunity to devote some of my sketching time to the new exhibition: The Crime Museum Uncovered as well as the Glass and Ceramics Store and the Centre for Human Bioarchaeology. 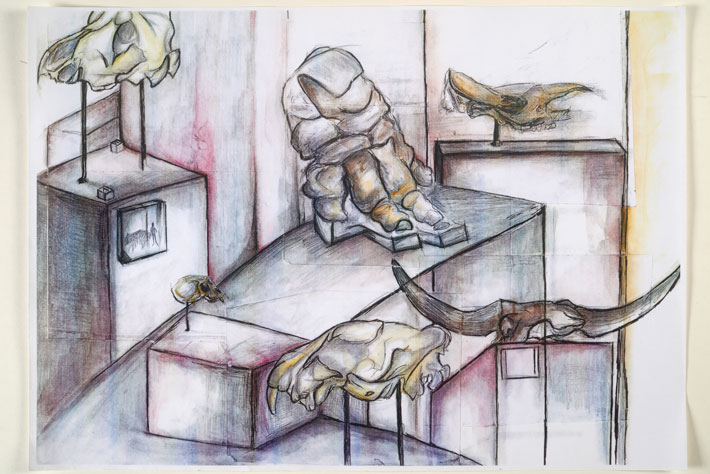 From the London before London gallery. © Samantha Bushaway/photograph by Museum of London 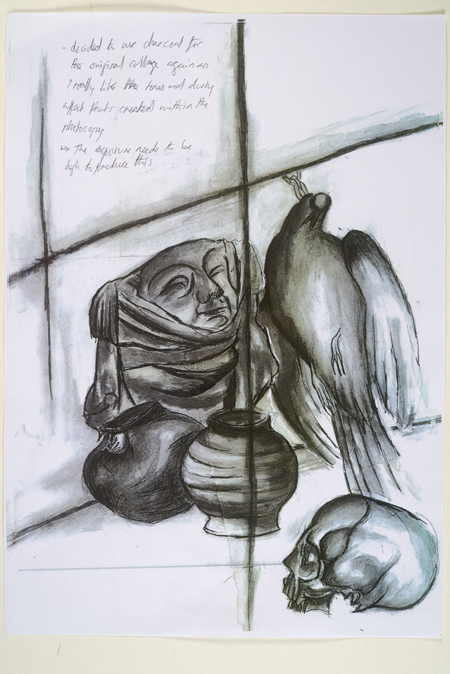 I have used collage in previous projects. In this project it became my primary focus. I used photocopies of my sketches gathered from drawing in the museum, changed the scale and then collaged objects together in a way that they were not displayed in in the museum. I then drew over these collages to create completely new images. My first collage was literally a combination of medieval objects. As time progressed I became interested in collaging items/objects from different time periods, galleries, and places. This gave me control over the displays and it was almost as if I was recreating my own, slightly absurd-looking, museum collection. Museums display things in chronological order in relative groups and I, as an illustrator have the power to document an entirely different experience of the museum based through my interpretations and the work I produce.

I photocopied my collages and changed the scale to see the effect of the colour photocopy on the new images. I felt that the photocopies were more successful than the collages displayed as they were.

A large portion of the collages that I created consisted of one or more images of pot sketches. I wondered how combining the pot imagery with various other sketches might encourage a particular narrative. I thought that by combining various sketches from all the different places I had drawn in I could recreate a visual story that didn’t limit the medieval pot to the medieval time period…. Almost like changing history. Maybe the pot might belong to a collection of objects from the crime exhibition instead? 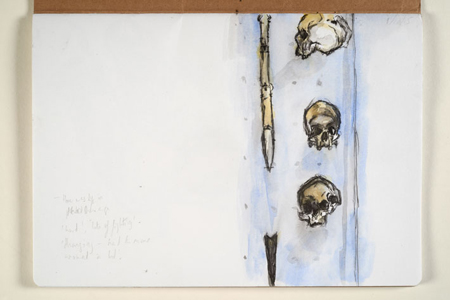 Early on in my sketching I was drawn to objects in the museum that are considered more intrinsically interesting, such as animal skulls/bones, remains of statues and models of buildings. However as time progressed I began to wonder how I might make items such as pots more appealing. Pots, pans, flagons and other useable items make up a large portion of the medieval collection however they are often overlooked in favour of more visually appealing items- such as the skulls which always had large groups of people surrounding them.

When sketching from specific pots I became more interested and immersed in these sketches than I had previously been with the animal skulls, and I began to wonder who the pots might have belonged to, what had they been used for?… If the pot could talk what story would it tell of its experience? Although sketching the pots had initially been quite difficult to get into, probably because I didn’t find them immediately appealing, I began to feel more immersed in the objects I was looking at. Rather than simply just walking around admiring the collection, I delved into a particular subject matter through sitting, studying and recreating it. That was when I developed my practice into collage. 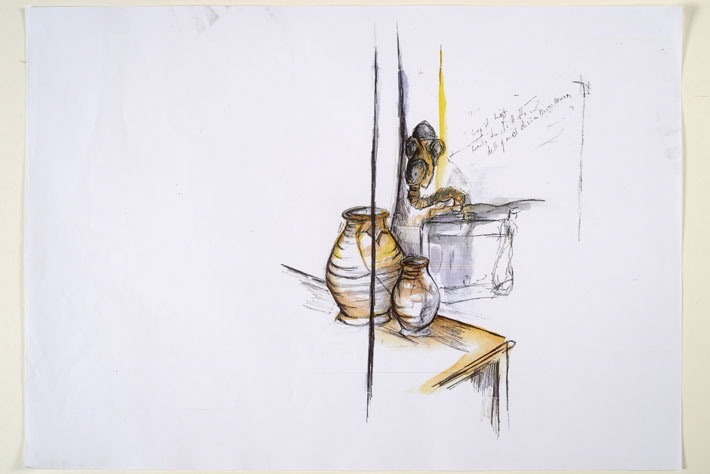 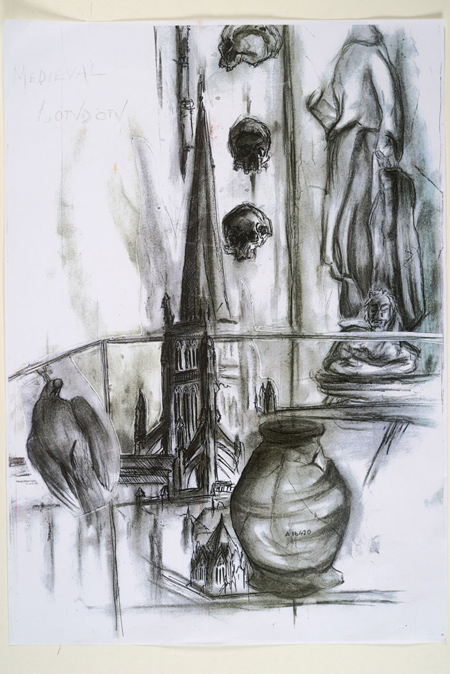 Sam’s medieval collage with skulls from the London before London gallery.

My medieval collage, the first one I created, has four main elements: a dead pigeon, broken statues, St Paul’s Cathedral, a combined sketch of pots and a sketch of a series of skulls taken from the London before London gallery. By combining images representing death with charcoal drawings over the collage the pot began to look like an urn. The individual elements in the drawing were not displayed together but by combining them in my drawing the pot was given a new narrative. It also highlighted the theme of death, from the plague, that crept into my work as I listened to a video about the Black Death on a loop whilst sketching in the gallery.

Drawing on location demonstrated to me the importance of working in new environments. It was encouraging to see how the museum environment influenced my sketches. Creating sketches in the Glass and Ceramics Store and the Centre for Human Bioarchaeology resulted in me feeling a different kind of pressure from that which I usually experience when drawing. It became even more important to document my experience, as photography was not allowed in these archives.