My ideal job would give me licence to stare at people all day. Maybe I should have become a photographer, but while I get the depth of field thing (I think), I never really felt totally at one with a camera. Instead I have become the next best thing for a people-starer: a dress historian.

My profession (no sniggering at the back!) provides me with a legitimate reason – or so I am telling myself – for gazing at others and for dissecting their appearance. I’m not too bothered whether someone is fashionably dressed or looks – or pretends to look – as if they don’t particularly care about their clothes. And when I say dissect I don’t mean judge. Whether the clothes are beautiful, ugly, boring or unremarkable (in my eyes or by general consent) is neither here nor there. I want to know why that particular person chose to wear that particular thing in combination with the other things they’ve put on. (Naturally my curiosity extends to accessories, jewellery, hair and make-up as well.)

When I see a photo or painting showing people, I cannot help but look at their clothes even if that might be far from what the producer intended. Primarily focussing on garments often seems wrong – the equivalent of scouring Webster’s The Duchess of Malfi for references to dress terms. Yes, I’ve been there, but at least it meant that I actually read the Duchess of Malfi, which is awesome (the play, not that fact that I’ve read it). Most of the time, though, I don’t worry about my obsessive behaviour and just get on with it.

Why this long intro about moi? Because I am about to do something – I have already started – that again doesn’t quite feel right. I want to go through some (by far not all) of my favourite Christina Broom photos and regale you with observations about the clothes worn by the people depicted.

(If you want to know more about Broom, listen to my colleague Anna Sparham, who explains so much better than I ever could the appeal of Broom’s photos - watch the video). 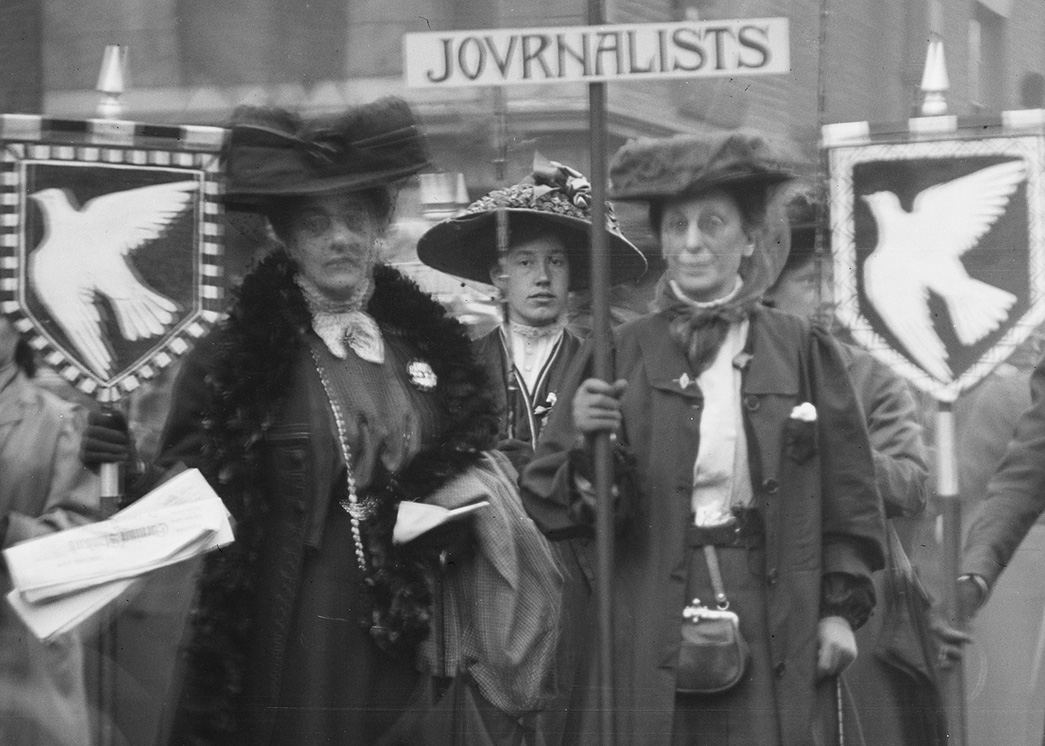 Journalists at The Pageant of Women’s Trades and Professions, 27 April 1909 (detail)

I still haven’t quite been able to put my finger on what it is that makes Broom’s photos so mesmerising. For me it is of course partly the clothes, particularly the fact that you see garments that people would not normally wear in a studio setting. Many of her photos have a snapshot feel, but because of the process Broom used, there is a lot of sartorial detail. There is also something about Broom’s protagonists – sitters is just not the right word – looking at you/me. I realise this is not unusual and that people photographed in studios also looked at the photographer and thus the viewer. However, while studio photographs often look posed, the people in Broom’s images pose themselves, which is a different thing. I am getting into territory that I do not know enough about, so lets just look at some of the clothes.

I start with a scene in Hyde Park from around 1903-5. While I will concentrate on the female wardrobe, ignoring Broom’s images of soldiers, the men in this photo are worth mentioning. They wear morning, lounge suit and frock coat, respectively, thus demonstrating the three available respectable options at the beginning of last century (note that the man in the lounge suit does of course not wear a top hat). It is good to see some back views, which do not appear much in studio photographs. Below is another shot of Hyde Park from the same day (you can just make out some of the people we just saw in the background). It provides a glimpse of a teenager’s wrinkly stockings and a fabulous high-crowned bowler hat. (I wonder whether the photos were taken during a royal event. If you have any views on that, let me know!) Turning to the suffragettes, the next photo shows women behind a Sweets Stall at the Women’s Exhibition organised by the Women’s Social and Political Union in May 1909. I love the hats, the eyebrows of the women with the posy at her waist and how you can clearly see corsets shaping women’s bodies and affecting their stance. With their white clothing four of the women blend into the stand and the decoration of their offerings, seemingly becoming Sweets themselves. This is not the case for Emmeline Pankhurst who stands on the right. 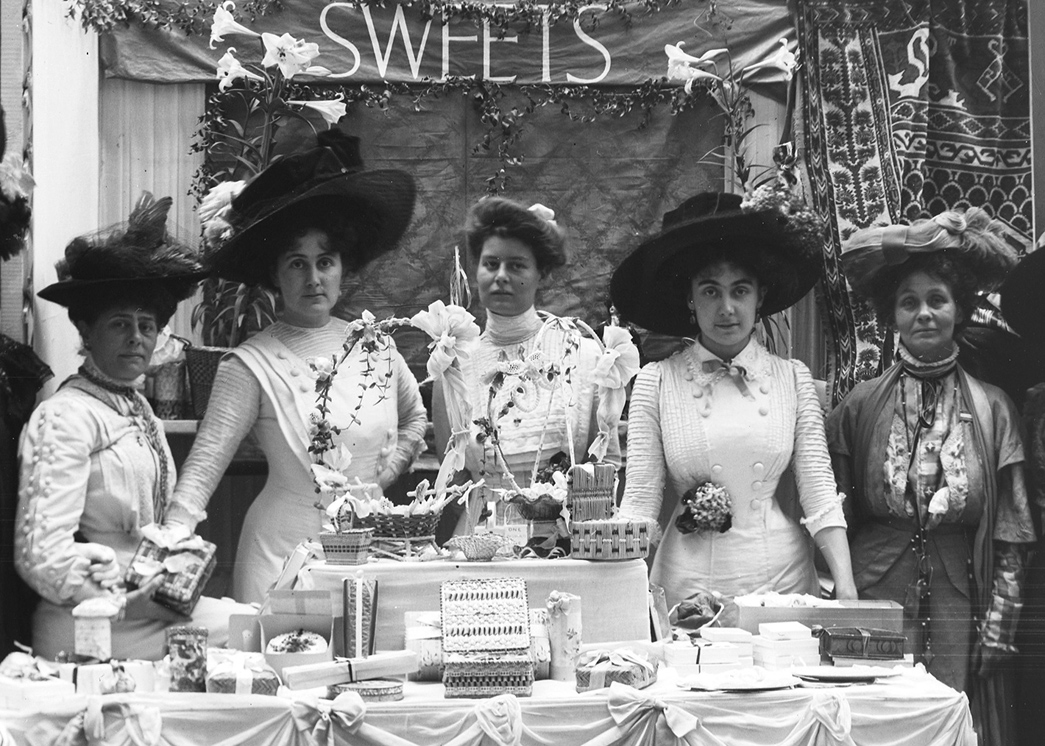 The Sweets stall at the Women’s Exhibition, May 1909 (detail)

The Women’s Exhibition also included two dress stalls. At one ‘summer dresses’ were sold while the other was devoted to the sale of ‘beautiful and artistic day and evening dresses and coats’ given by Amy Kotze. If you have seen any of these dresses displayed or in archives let us know! 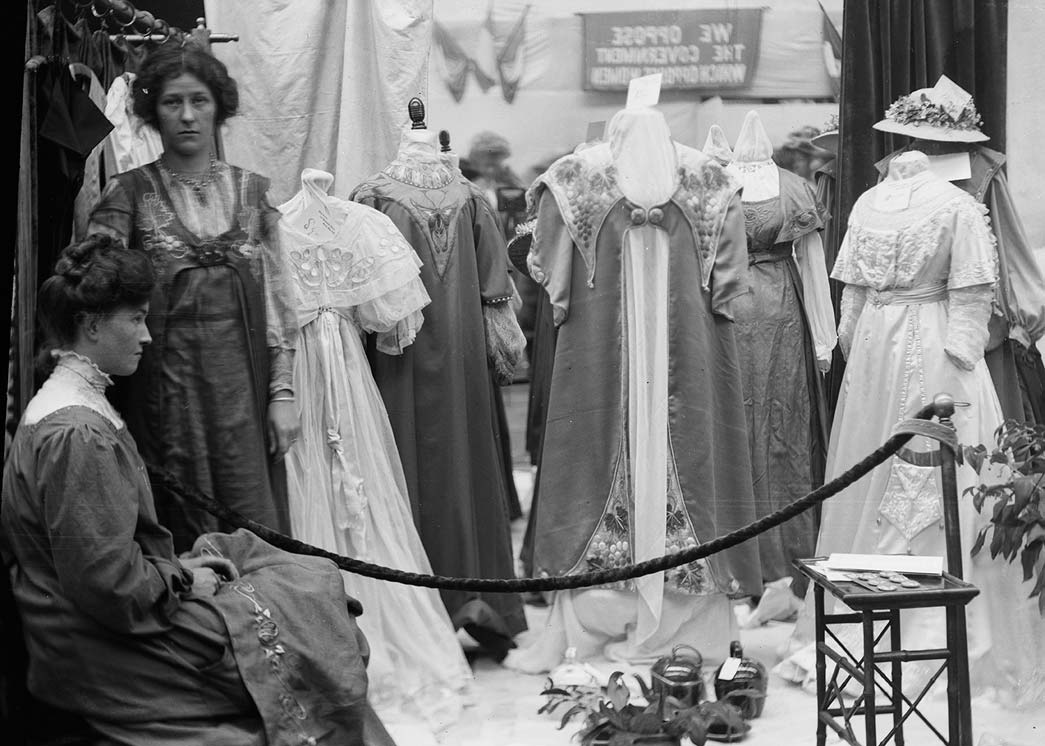 A Dress stall at The Women’s Exhibition, May 1909 (detail)

The next photo shows the suffragette leader Charlotte Marsh before a male crowd assembled for a rally at Hyde Park in June 1910. I was wondering whether she also wore an Amy Kotze dress (or coat?). Charlotte Marsh’s clothes are in contrast to the more conventional dresses worn by three women having tea the previous year at the Refreshment department at the Women’s Exhibition already mentioned above. The hat of the woman in the centre reminds me of one of the wonderful ‘Brautkronen’ or bridal crowns that used to be worn in the black forest. 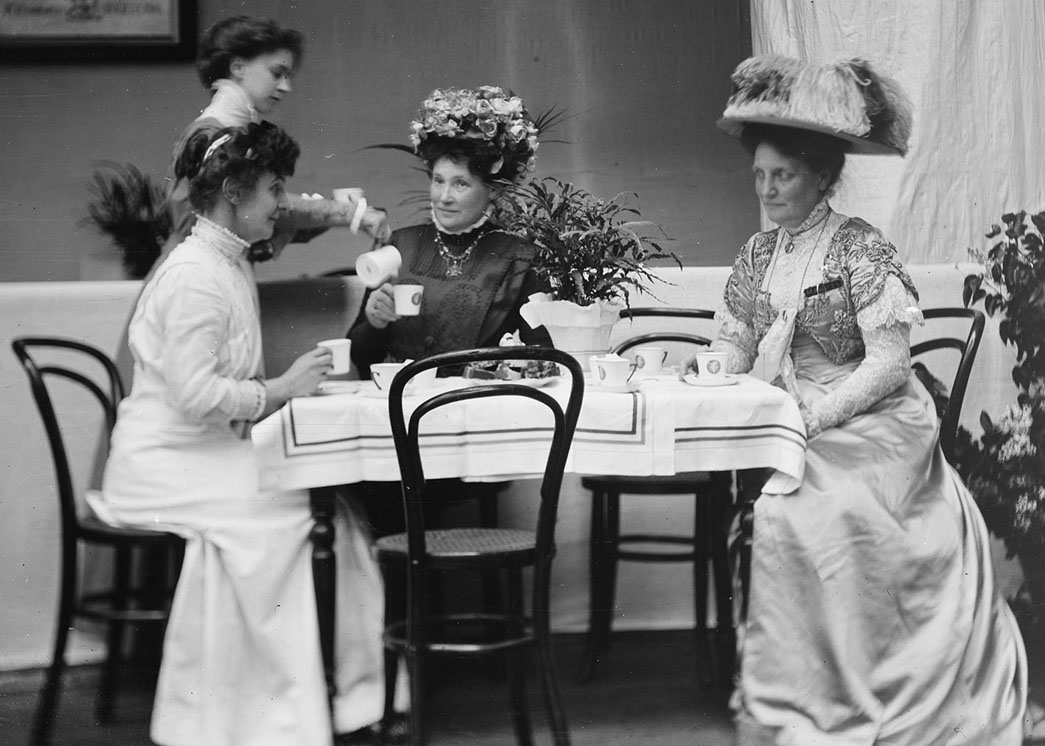 I also love the photo below taken during a march to promote the Women’s Exhibition. You have already seen a detail above focusing on the lace scarf securing the hat of the woman on the left, the purses and the parasol (against the sun) and umbrella (against the rain) of the tired-looking woman in the centre.

I also love the photo below taken during a march to promote the Women’s Exhibition. You have already seen a detail above focusing on the lace scarf securing the hat of the woman on the left, the purses and the parasol (against the sun) and umbrella (against the rain) of the tired-looking woman in the centre. 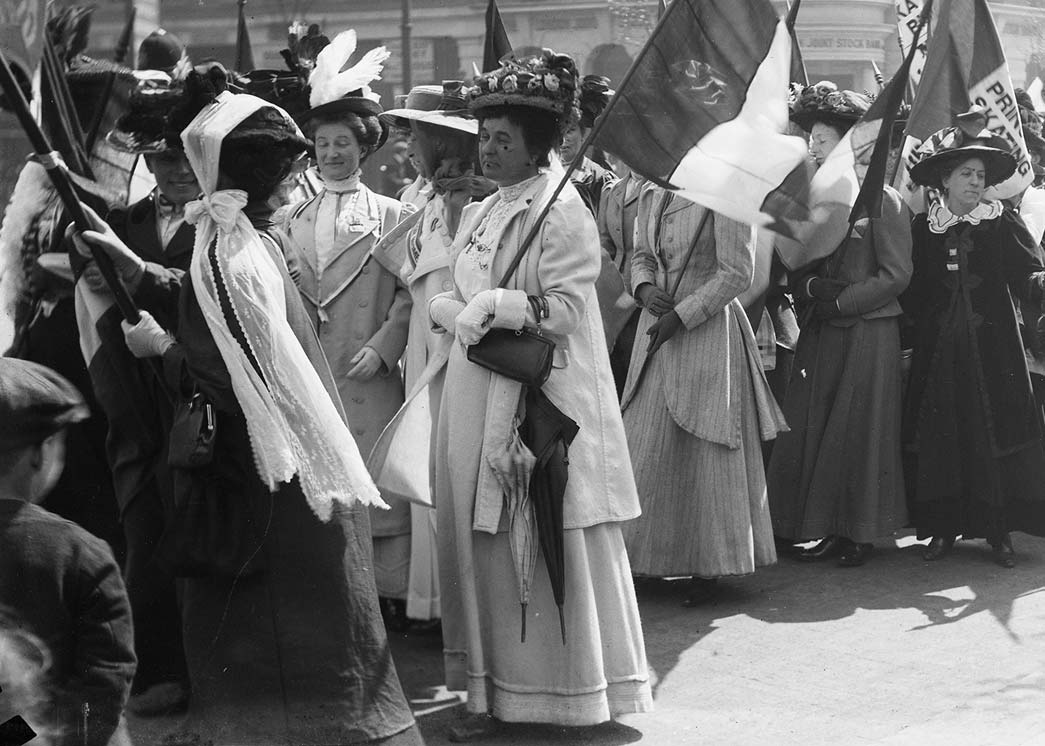 Suffragettes prepare to march in a procession to promote the Women’s Exhibition, May 1909 (detail)

Like the first image in this post (currently serving as my screen saver) the next photo was taken at the Pageant of Women’s Trades and Professions in April 1909. I like Broom’s blurred photos, here highlighting the one woman who is in focus. And I adore the flamboyant outfit of the actress on the left. For her, more was definitely more, particularly with regards to surface textures. The suffragettes were quite keen on dressing up in historic garments. I am not quite as interested in the photos showing costumes that were obviously made up but the one below taken at the Historical Pageant of the Women’s Coronation Procession on 17 June 1911, caught my eye. The women seem to wear actual dresses from the 1840s and 1850s, maybe not so surprising as it is the equivalent to us wearing garments from the 1950s. 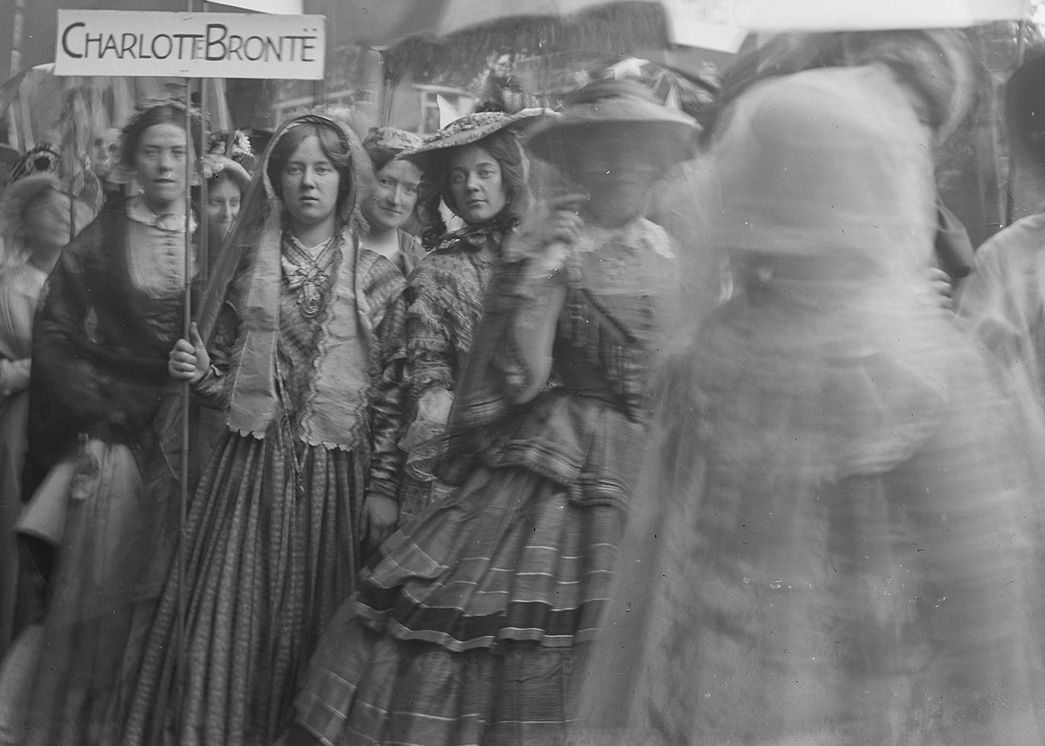 The Historical Pageant of the Women’s Coronation Procession, 17 June 1911 (detail)

I want to close with one of my favourite Broom photos. This time it really does not seem appropriate to focus on the clothes. The image shows Mabel Tuke, joint Honorary Secretary of the Women’s Social and Political Union who in March 1912, together with Emmeline Pankhurst, threw a stone through the window of No.10 Downing Street. Both women were arrested and Tuke was sentenced to three weeks in Holloway Prison. One could note things about her clothes (and seeming lack of corset) but they are not not why I am attracted to this photo. Maybe it is the plain background that makes it look so modern which seems to erase the time that has past between 1909, when the photo was probably taken, and 2015. 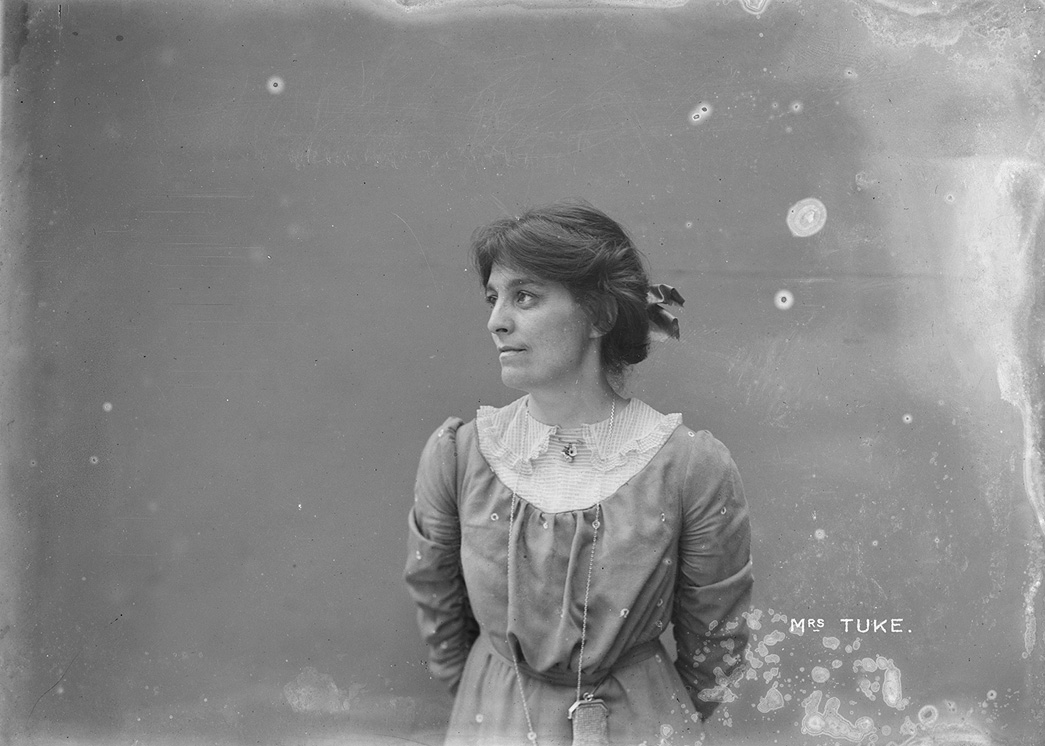 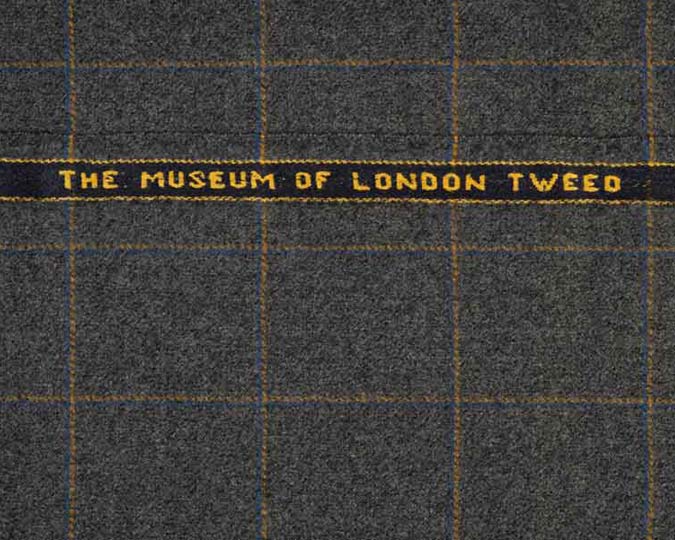 Watch a video exploring the history of the iconic cloth and how the museum created its own, Sherlock-inspired tweed.