Heroism on display at the Museum of London Docklands

A display at the Museum of London Docklands tells a story of extraordinary bravery in East London during the Second World War. Vyki Sparkes, curator of social and working history, and Nick Moore, son of the man awarded a George Cross for his heroism, discuss the medals and the man awarded them. 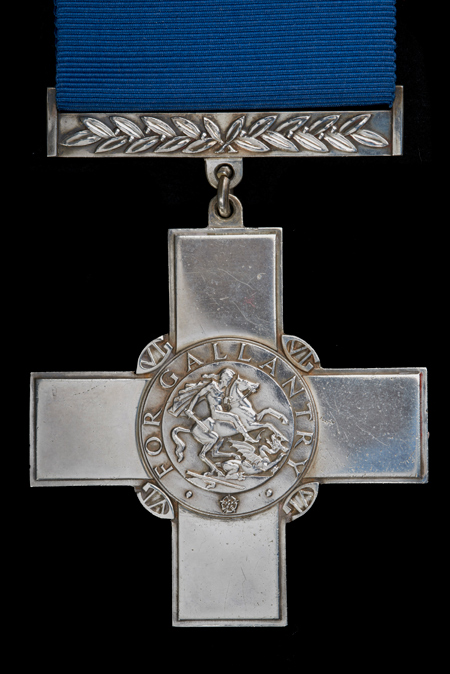 Vyki: Our new display features a George Cross medal, the highest honour in Britain alongside the Victoria Cross, given to a heroic Londoner during the Second World War. This George Cross awarded to Richard V. Moore, for his work defusing unexploded parachute mines during the early days of the Blitz.

On the night of 17 September 1940, German aircraft dropped parachute mines on London for the first time. Parachute mines, originally intended to be dropped at sea and blow up ships, had never been used deliberately on land before, so the navy and armed forces were completely unprepared. The mines had a timer with a 21 second delay, designed so they would explode close to the ground. Because the ground did not absorb the shock of the explosion, parachute mines caused a huge amount of collateral damage, often for miles around. These weapons, popularly dubbed ‘landmines’, were greatly feared, so much so that Churchill banned any mention of them in the British press. 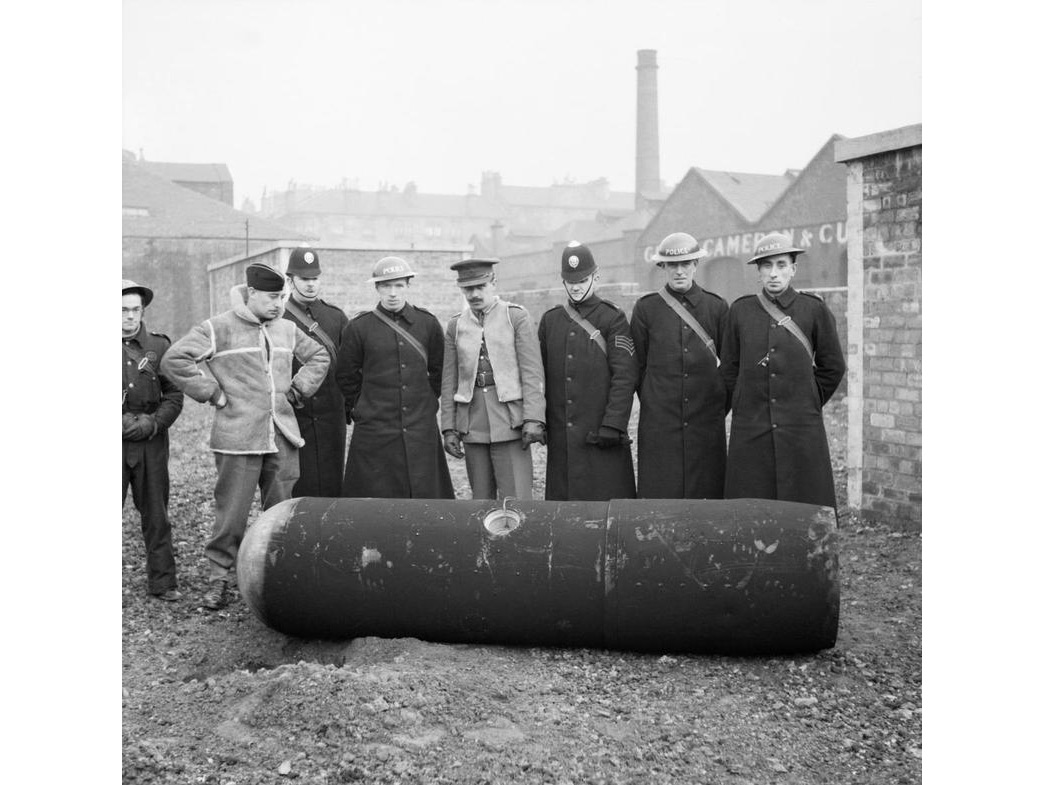 Many mines did not explode on impact, but still presented a huge risk. If their timer restarted they could go off at any moment. Moore was one of those who volunteered to go and make these unexploded mines safe. At 24 years of age, Moore was a naval volunteer with no practical experience of dismantling parachute mines. With no special tools or protective clothing, Moore had to learn ‘on the job’, knowing that a mistake could kill him and should the timer restart, he wouldn’t have more than 21 seconds to try to escape.

Over the next four days, Moore and Lieutenant Commander Ryan travelled across London and the south east, making safe unexploded parachute mines. Their work saved lives and homes, and kept military sites and factories working.

Nick Moore: My father almost never spoke about his work defusing these bombs - certainly not when we were growing up. He was a very modest man, he never, for example, had his George Cross on public display. Only in later life, when he was meeting other veterans, could you drag the story out of him. I had the privilege of accompanying him to some meetings of the Victoria Cross and George Cross Association, and to hear him give this extraordinary account. 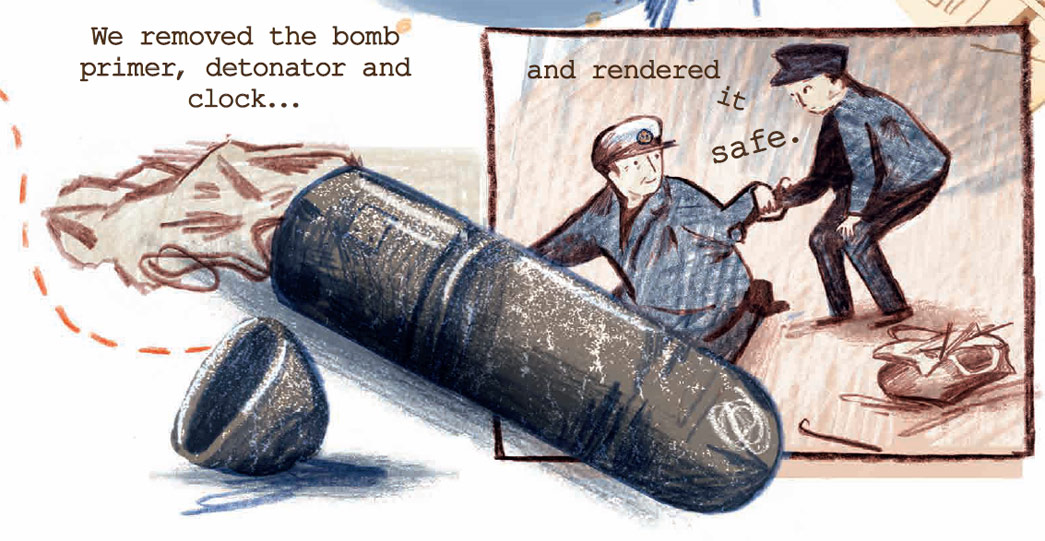 A panel from the illustrated diary of Richard Moore

Artist Rebecca Bagley. Moore is shown on the right.

Vyki: On 21 September 1940, four mines were dropped over Hornchurch airfield and Dagenham in east London, three of which failed to explode. Moore spent a difficult three hours tackling a mine warped by impact outside Briggs Motor factory in Dagenham, using borrowed tools. As Moore headed to find his colleagues, he witnessed a terrible explosion - tragically, Ryan and Chief Petty Officer Reginald Ellingworth were killed whilst tackling a mine hanging from a nearby house.

The heroism of this team was recognised by King George V when Moore – and Ryan and Ellingworth after their deaths – were awarded the newly created George Cross medal. It is still the highest award possible for extreme bravery displayed outside the battlefield. 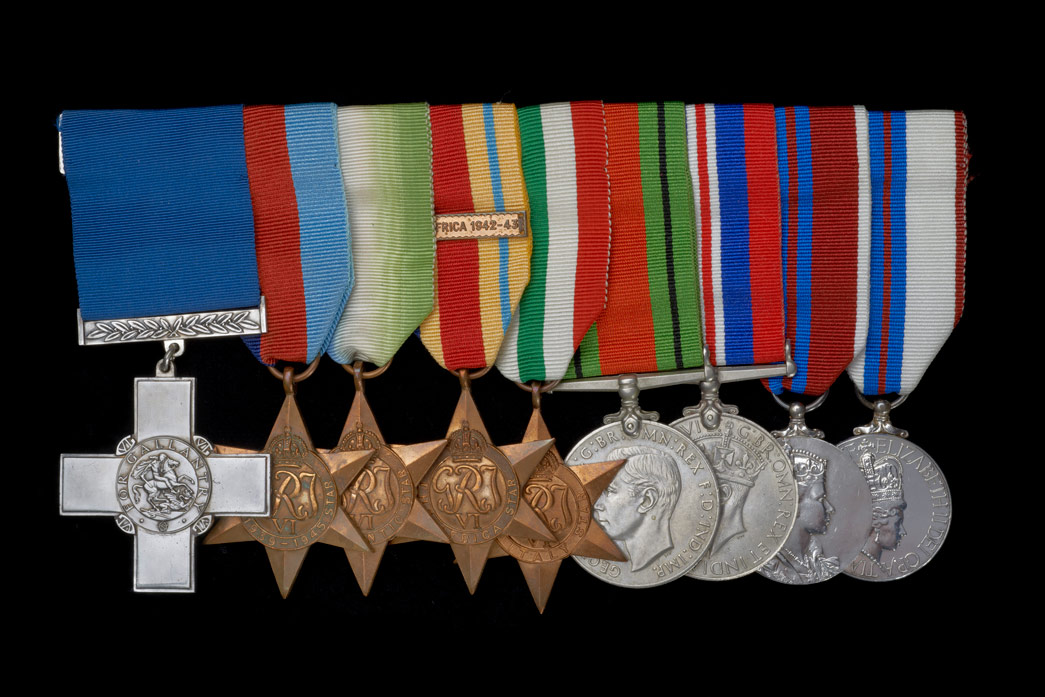 The medals of Richard Moore

His George Cross, awarded in 1940 for bravery defusing German bombs, at the front

Vyki: The museum was very kindly donated Moore’s medals (including the George Cross) and some fascinating accompanying documents by the Moore family earlier this year. It is an honour for us to have this medal and to be able to tell its story to our audiences. Only 406 people have ever received the George Cross, making it rarer than the Victoria Cross (which is awarded for extreme bravery shown on the battlefield). The museum does not have another George Cross in our collection, and it is particularly fitting given the connection to east London.

Nick Moore: When it came to my father’s medals, our family had quite a dilemma. You don’t want them just sitting in a drawer somewhere, and even though these medals are now worth a lot of money, we felt it would be wrong to sell it. I was delighted when the museum agreed to accept them.

It’s wonderful that the George Cross will be on display at the Museum of London Docklands. Firstly, because the majority of the vital work defusing these bombs was done in east London, so it’s very appropriate. Secondly, because I was the project manager for the creation of the museum at Docklands, so I feel very proud about that connection. 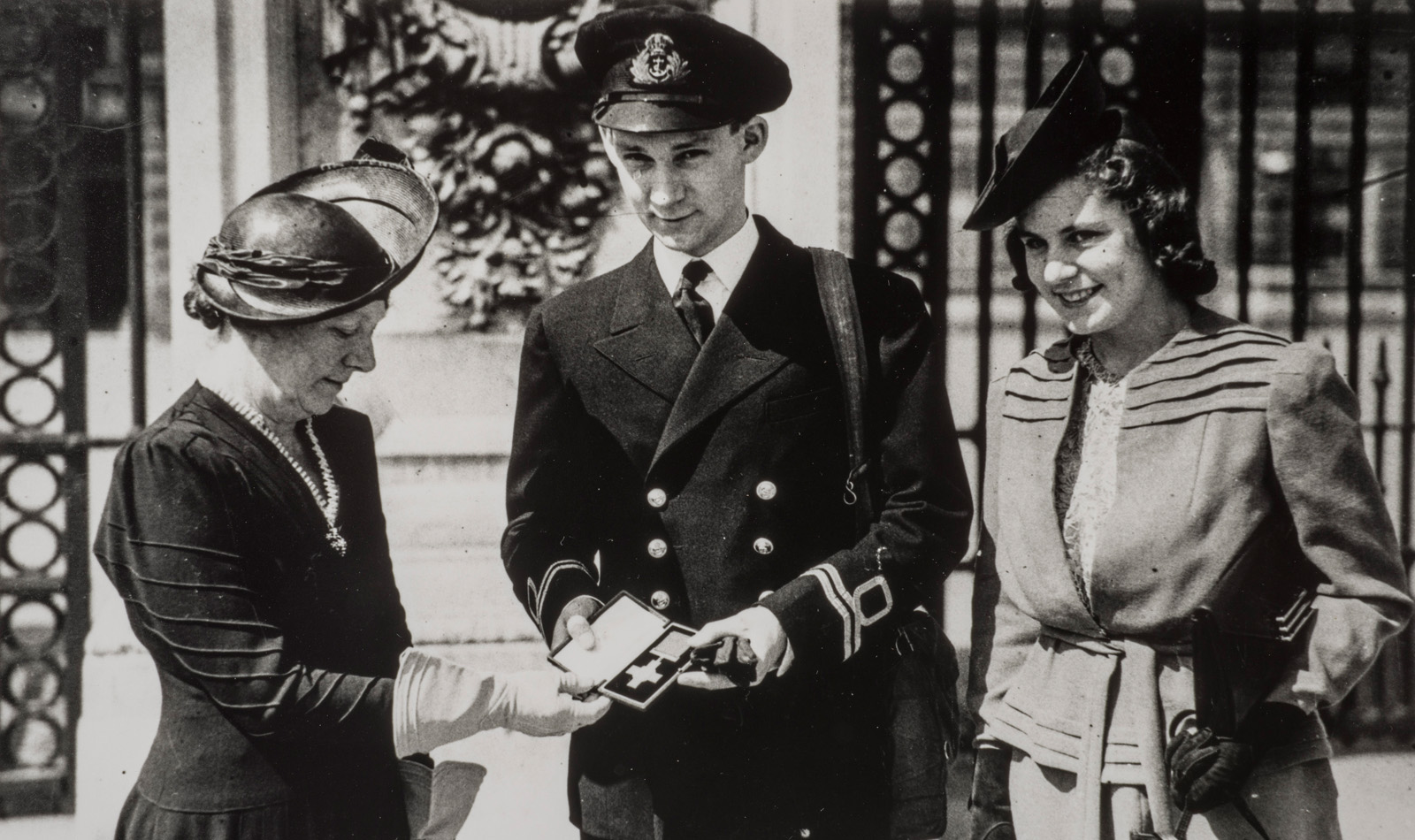 After receiving his George Cross, with his mother & sister

Nick: This image shows my father outside Buckingham Palace, just after receiving his George Cross. His mother is to his right, and his sister to his left. She will actually be attending the unveiling of the new display in the museum - she's now 92 years old.

Vyki: Moore’s medals are on display in the Docklands at War gallery, which focuses on the experiences of the men and women living and working in the docks during the Second World War. The new display, whilst small, is important and acts as a fitting end to the gallery, a place to recognise the bravery shown during this time of extreme adversity. 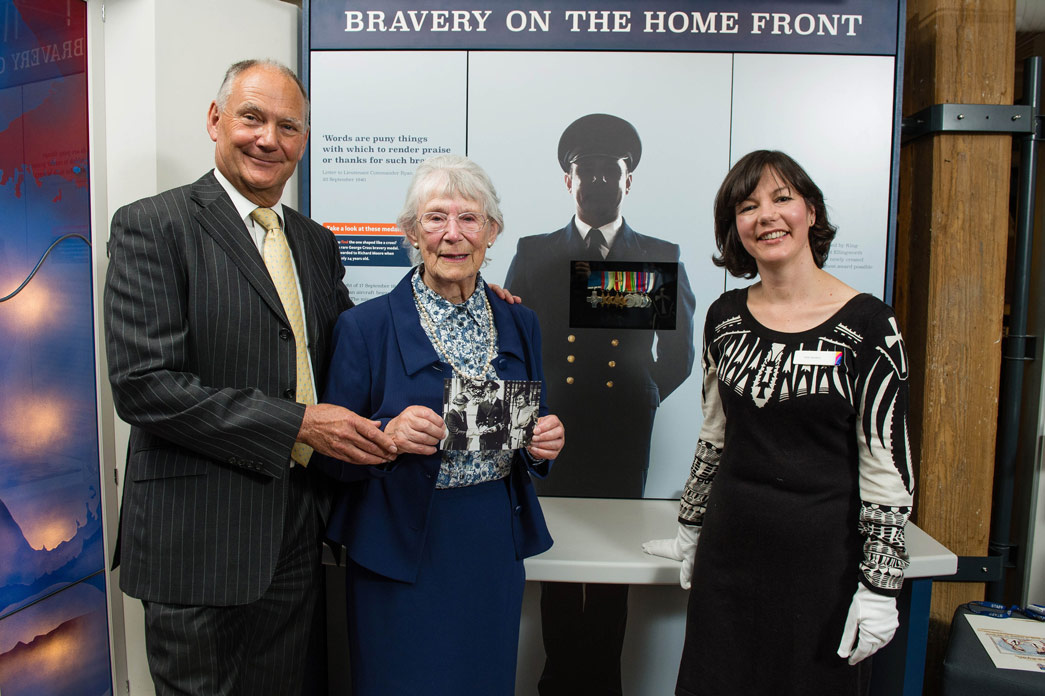 Curator Vyki Sparkes stands to the right, with Nick Moore and his aunt to the left.

Vyki: This display was tailored for families and children. It’s our ambition to make the galleries at the Museum of London Docklands even more appealing for family groups over the next few years. We introduced two interpretative devices particularly appropriate for the main audience. The first is a 3D puzzle based on the George Cross. We also have an illustrated version of the dramatic story that led to Moore being awarded the medal, drawn by artist Rebecca Bagley.

It’s based on a diary Moore wrote for Ryan’s widow, detailing those crucial days leading up to Ryan’s death. We also decided to display the medals as if they were pinned to a man’s chest, using a silhouetted figure in the background, to remind people about the man at the heart of this story. 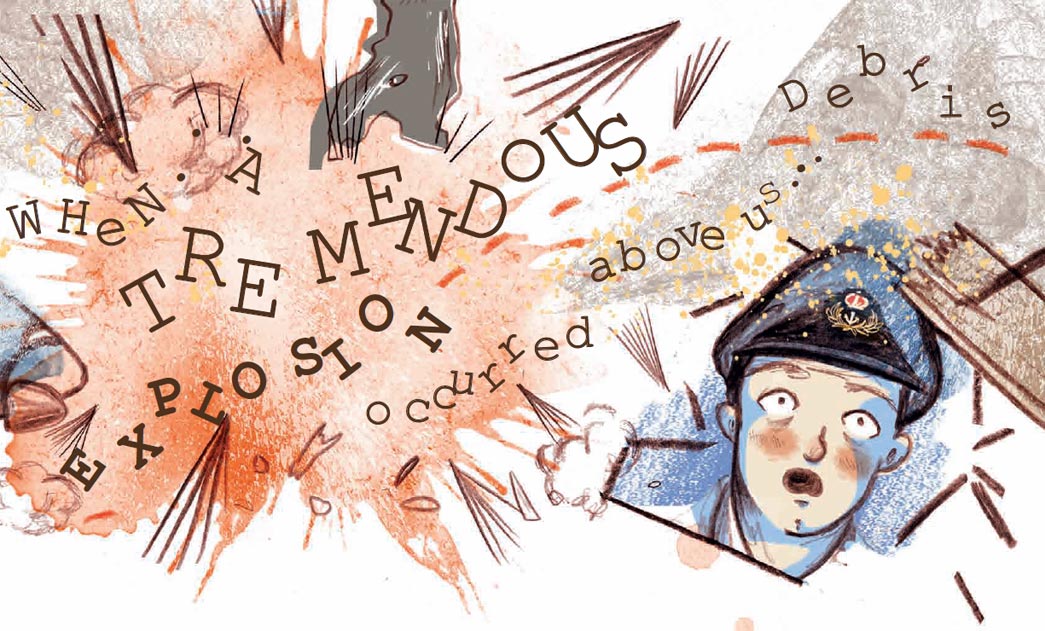 Image from the illustrated diary of Richard Moore

Artist Rebecca Bagley. This panel shows the explosion that killed Ryan and Ellingworth.

Vyki: Moore was later awarded another honour, a CBE, for his work for the nuclear industry and is widely credited as being the driving force behind the advanced gas-cooled reactors, which led to more efficient nuclear power. However, with any display we only have a small amount of space and have to stay very focused on which stories we can tell, so it was not possible to reference this in the gallery.

Nick: That is something that particularly strikes me about the events of 21 September 1940- two men were killed that night, happily my father lived. He went on to have this very illustrious career in the nuclear sector. Who knows what the other two guys, who were killed, might have accomplished had they lived. It reminds us all that war is a terrible thing, and to commemorate the sacrifice of those who gave their lives to save others.

Richard Moore's George Cross is on display at the Museum of London Docklands in our free galleries. 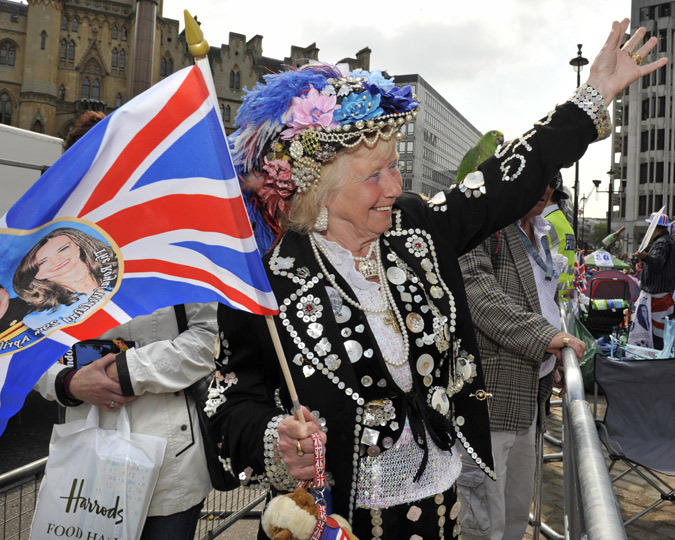 Six things you never knew about Pearly Kings and Queens

Do you know why Pearly Kings and Queens wear their colourful costumes? Discover how and why this iconic London tradition started.