Londoners have enjoyed winter skating for centuries. Our collection features everything from medieval ice skates carved out of animal bones, to accounts of a Victorian skating disaster in Regent's Park. Beatrice Behlen, senior fashion curator, investigates the ice-skating mania in the 1920s and 30s, from frosty fashions to high society skating. 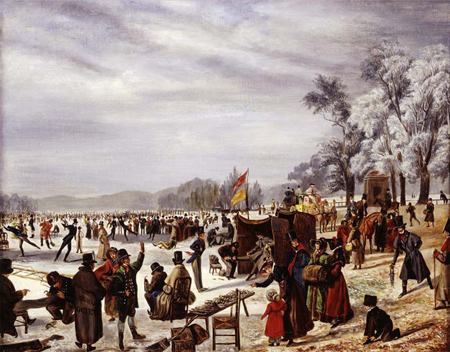 Skating on the Serpentine, 1839

Many paintings and photographs show the popularity of skating on London’s frozen lakes and also the Thames. From at least the nineteenth century, attempts were made to produce artificial ice so that skating could be enjoyed more safely and all year round. In November 1841, Henry Kirk came up with a 'substitute for ice for skating and sliding purposes' for which he suggested using salts mixed with sulphate of copper for colour and 'hog’s lard, to render it more slippery'. In July of 1842 Kirk laid down ‘a sheet of ice’ at the 'Coloseum' in Regent’s Park where, according to The Times, 'the most expert skaters may be daily seen practising' to attract investors- without much luck, it seems. 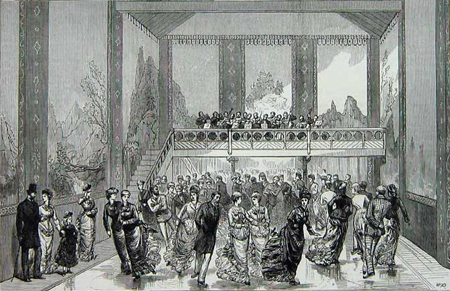 In 1876 the wonderfully named Glaciarum was opened on the King’s Road in Chelsea, based on the work of a John Gamgee (1831-1894) who had designed a floor allowing for the circulation of ‘freezing liquid’ to cool the ice, made up of a mixture of glycerine and water. Apparently ‘several noblemen and gentlemen – members of the London Skating Club’ could be seen ‘skating with expressed satisfaction’. Similar experiments continued to be undertaken and let to the opening of further relatively short-lived indoor rinks in the late 19th century. In January 1895 a hall in Westminster which had depicted a panorama of ‘Niagara in Winter’ was converted into an ice rink where skaters were accompanied by Mr Edward Solomon’s ‘first-class orchestra’.

More permanent structures only seem to have been available from the late 1920s. The ‘Pictorial and Descriptive Guide to London’ published in 1935 lists ‘real ice’ rinks at Golders Green, Hammersmith, Streatham, Bayswater and Richmond. According to an article in The Yorkshire Post of 2 May 1936, ‘it was the opening of the Ice Club in 1927 which began the present boom in indoor skating’. The London Ice Club was inaugurated with a special dinner on 14 January 1927. The venue at John Islip Street (near what is now Tate Britain) was a private members club, requiring an annual subscription on top of the entrance fees. In 1936 the purpose-built premises were re-christened Westminster Ice Rink and opened to the public. 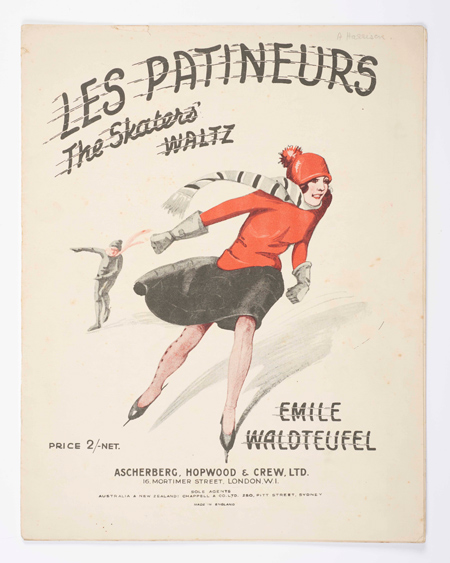 What the well-dressed skater is wearing

As anyone who has read Evelyn Waugh’s 1930 novel Vile Bodies knows, fancy dress parties were very fashionable between the First and Second World Wars. So-called ‘ice carnivals’ were also popular, not just among the wealthy crowd fictionalised by Waugh. The carnivals were often staged to raise money for charity, such as the ‘fancy dress revels’ organised in April 1939 by the Daily Mirror at Streatham Ice Arena in aid of the Streatham’s Babies’ Hospital. The ice carnival scene of the 1935 talkie Car of Dreams was filmed at Streatham Ice Rink and gives an idea of the fabulous costumes worn on these occasions. 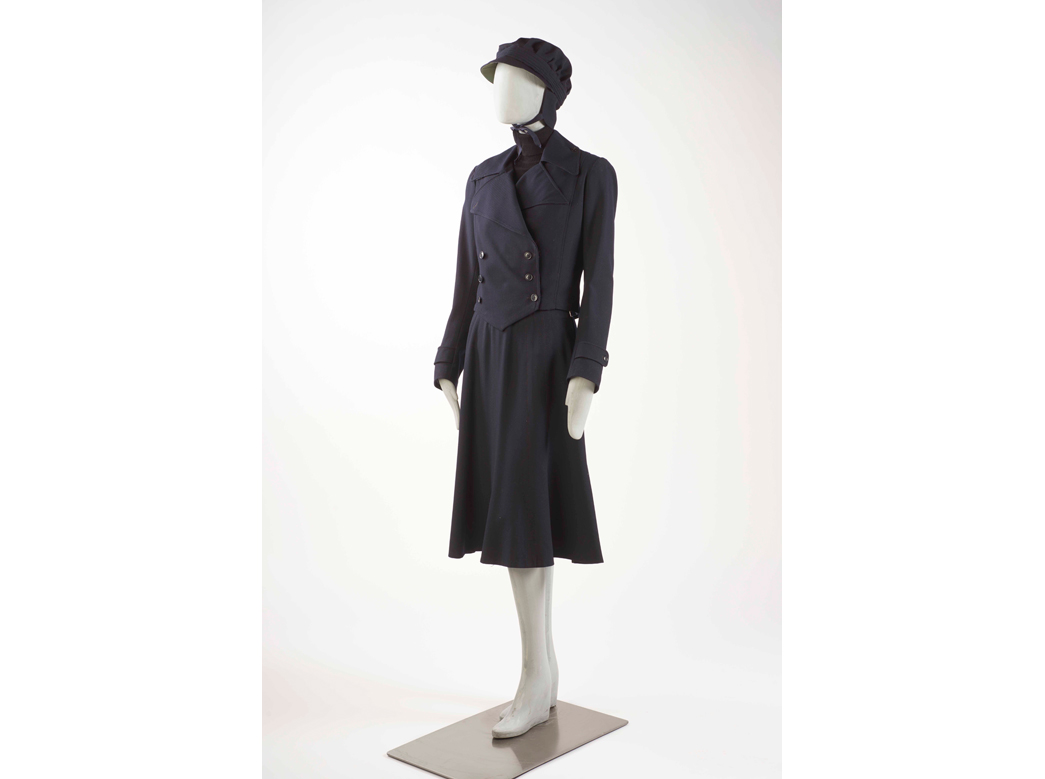 But what did the chic skater wear when not in fancy dress? Some men, like the British Foreign Secretary Samuel Hoare (1880-1959) favoured an all-black outfit, in his case composed of jodhpurs and a rollneck jumper. For women, an ensemble incorporating a slightly flared skirt seems to have been the preferred choice. We have in our collection a skiing suit originally worn by Myra Lady Fox (1906-1981) acquired at Fortnum & Mason, a department store now better known for its food section. The suit follows the dictum of British Vogue magazine which advised in December 1932 that the ‘smartest’ ‘ski-ing suits’ were ‘invariably in a dark colour – black or navy blue for preference, in proofed gabardine or some fairly smooth woollen material.’ The suit consists of a short jacket and a pair of trousers as well as a skirt. For a long time I believed the latter to be used for ‘après-ski’, the entertainment following a day’s vigorous outdoor sport. I know think that Lady Fox must have used or at least acquired the skirt for skating, more likely in one of the Swiss resorts than in London. 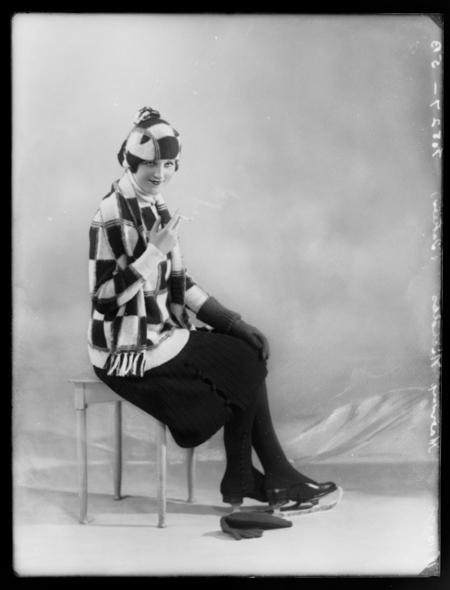 Photographed by Bassano Studio; ID no. IN11477

The short, flared skirt provided opportunity to display fancy woollen tights and to accessorize with gauntlet gloves, interesting head coverings and scarves. A small group of photos taken in 1928 for the London department stores Harvey Nicholls and Gamages that forms part of our amazing collection of advertising photographs from the Bassano studio provides further examples of chick skating wear. I am particularly taken by the spats, matching jumper, scarf and hat and the nonchalant pose of the model.

Another outfit photographed twice shows how short skirts could be when worn for skating. The long jumper is in keeping with the low waistline of the 1920s and incorporates some practical hand-warming pockets. 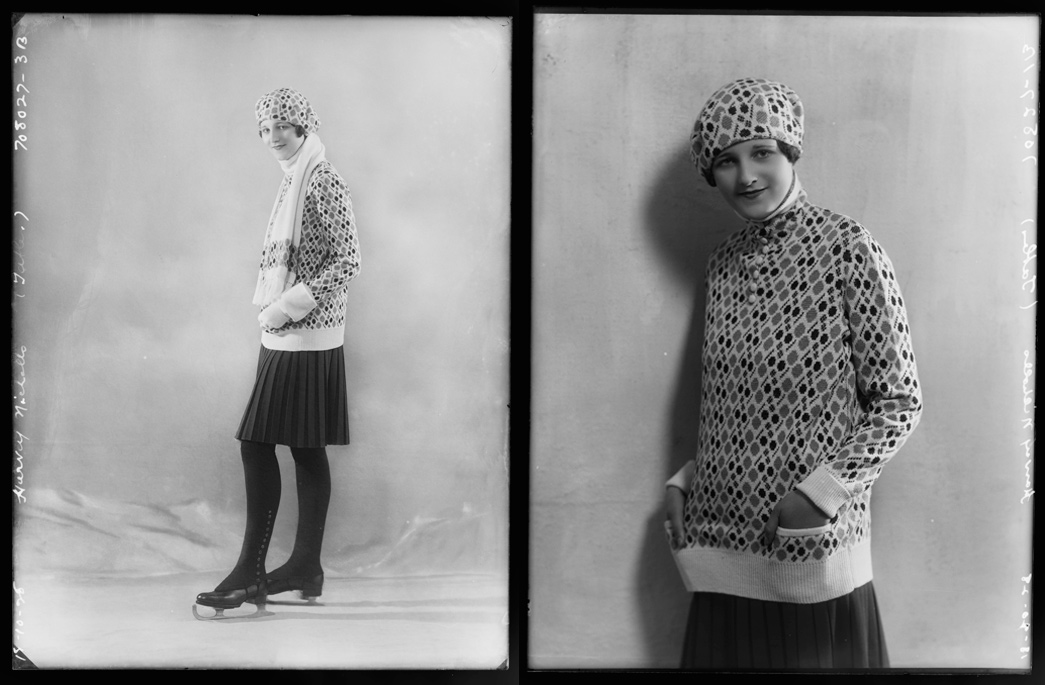 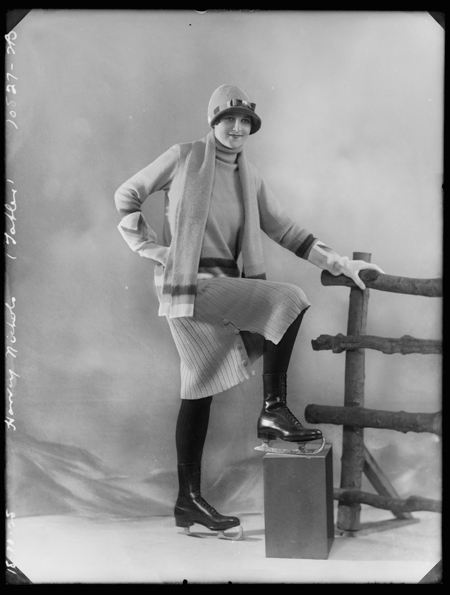 A third shows the model in a cloche hat, its striped hatband being mirrored in the decoration of the gloves, the jumper and the scarf. Two of the buttons of the skirt’s side slit have been undone to demonstrate how increased ease of movement could be achieved.

The London skating craze was curtailed by the outbreak of the Second World War. The capital’s ice rinks were closed and given over to other purposes. The Streatham Ice Arena seems to have been last used in March 1940 and did not re-open until 1946. Stephen Courtauld managed to run the Westminster Ice Rink just a little longer. In early April 1940 he was praised for keeping people in employment, facilitating healthy exercise and for providing a place for ‘relaxation from worry and responsibility’ to sailors, soldiers, airmen, politicians and other public servants. This ‘work of national importance’ only lasted another month or so when the former London Ice Club closed its doors, never to reopen.