Newly acquired by the Museum of London, an epic panorama 20 feet wide records what London looked like 200 years ago. Let's look at this lost view of the city, now uncovered for the first time in centuries.

A panoramic view of London, from the tower of St. Margaret's Church

Painted in 1815 by the French artist Pierre Prévost.

In late 1815, as the Napoleonic Wars drew to a close, French artist Pierre Prévost took the opportunity to visit London, where he created this 360° view. It was painted from the tower of St Margaret’s church, in the shadow of Westminster Abbey. Click through this gallery of images to see Prévost's view of London and how it's changed over the centuries. 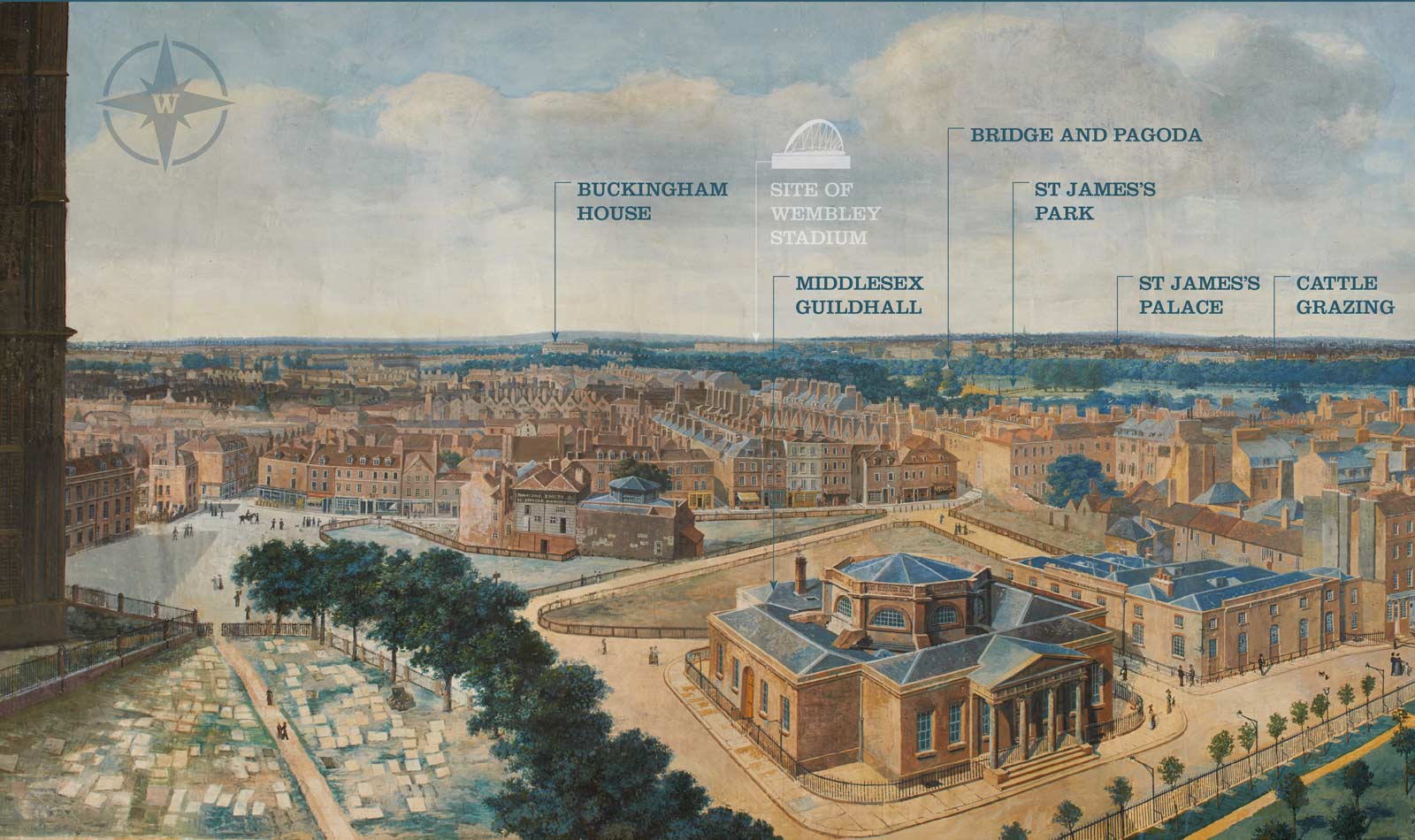 The cattle grazing on the park supplied milk to much of west London. In the foreground is the Middlesex Guildhall, now the home of the Supreme Court. 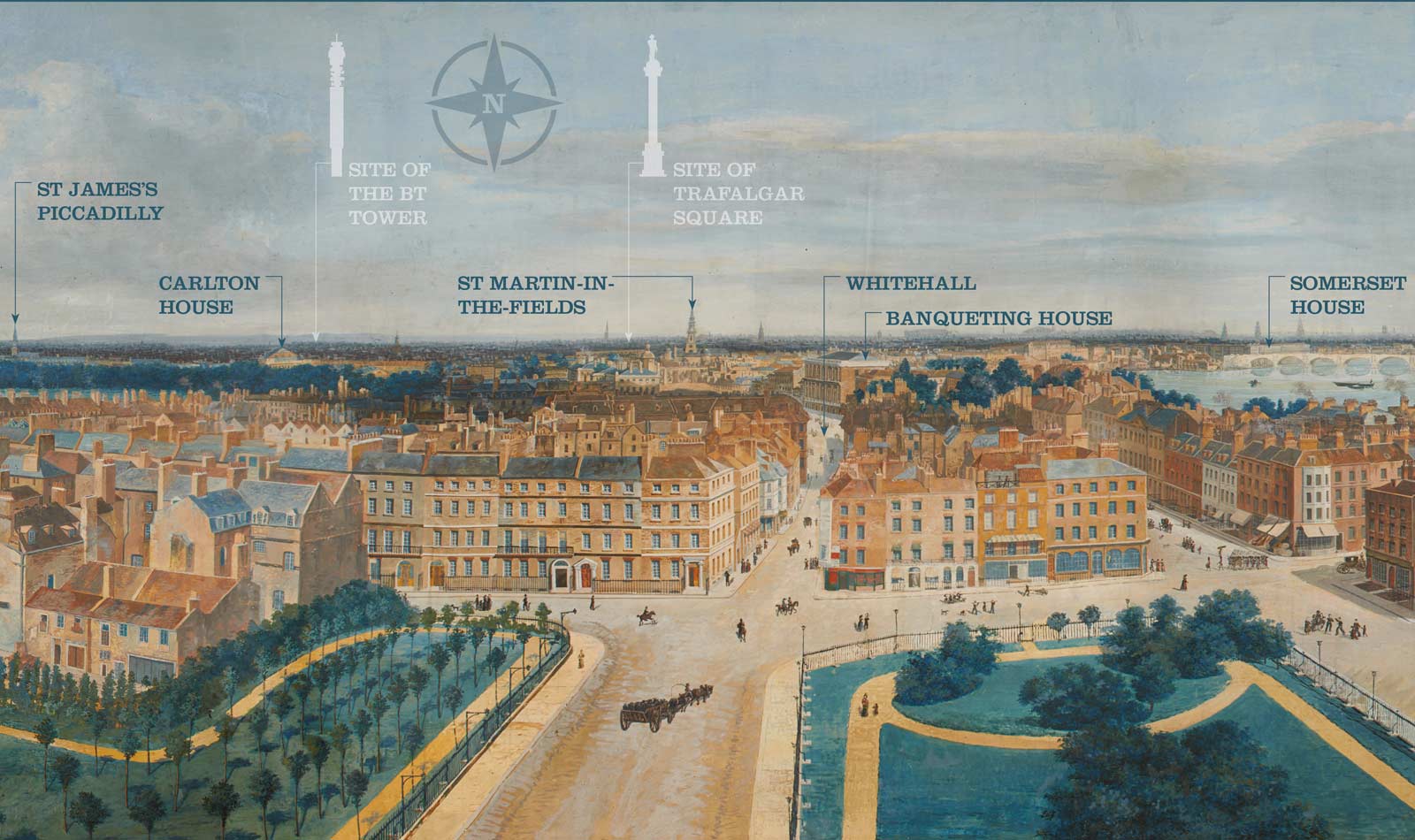 The view north, towards the modern site of Trafalgar Square

Nelson's Column was not completed until 1843, 28 years after this panorama was painted. 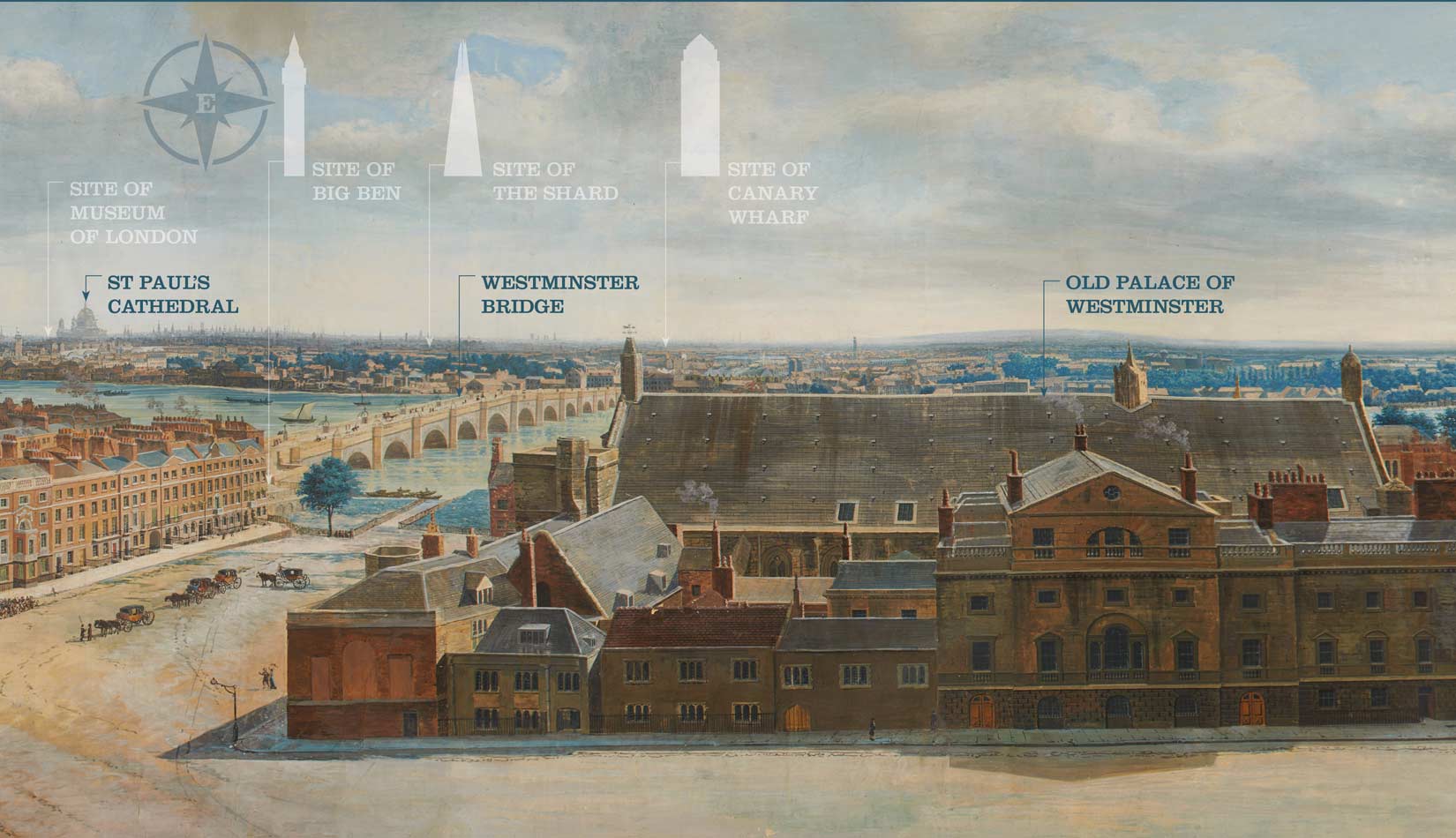 The view looking east, towards the Old Palace of Westminster

The Old Palace of Westminster was used as the meeting-place of Parliament until 1834, when it was almost entirely destroyed in a huge fire. The Gothic Revival building that replaced it is still used today. 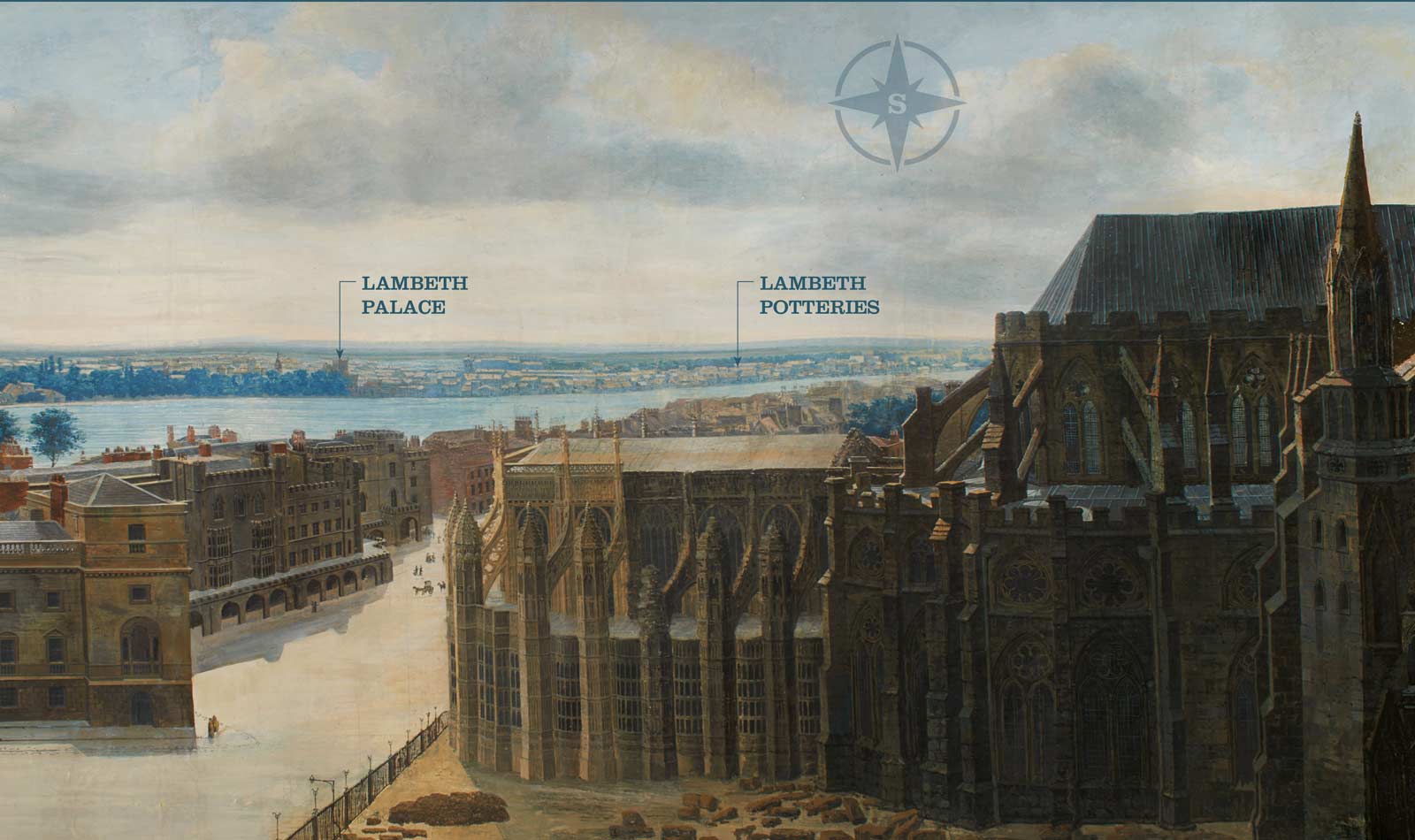 The looming bulk of Wesminster Abbey dominates the foreground, but in the distance the green fields of Lambeth are visible. 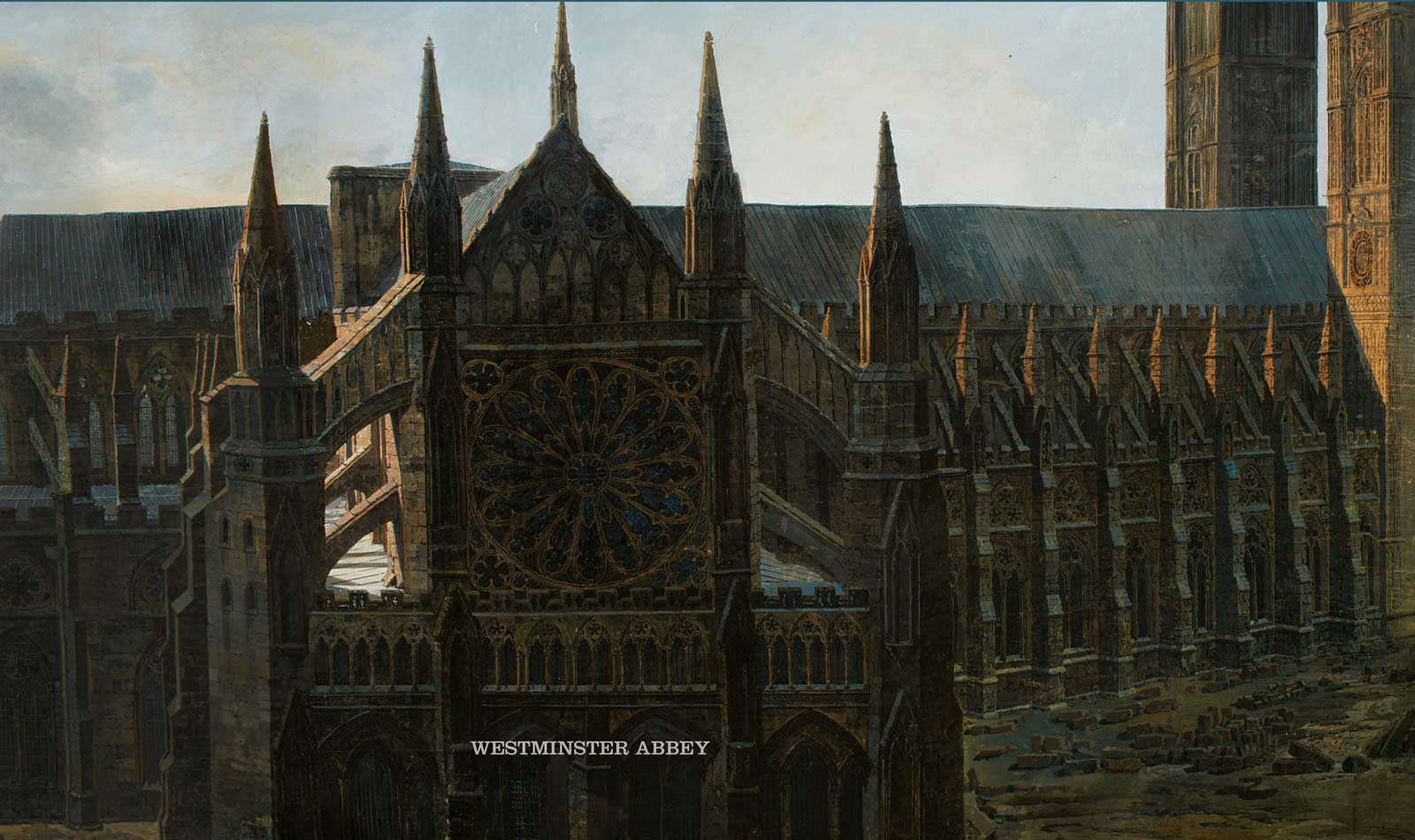 While most of the buildings in the painting have changed dramatically in the last 200 years, Westminster Abbey is still recognisable. 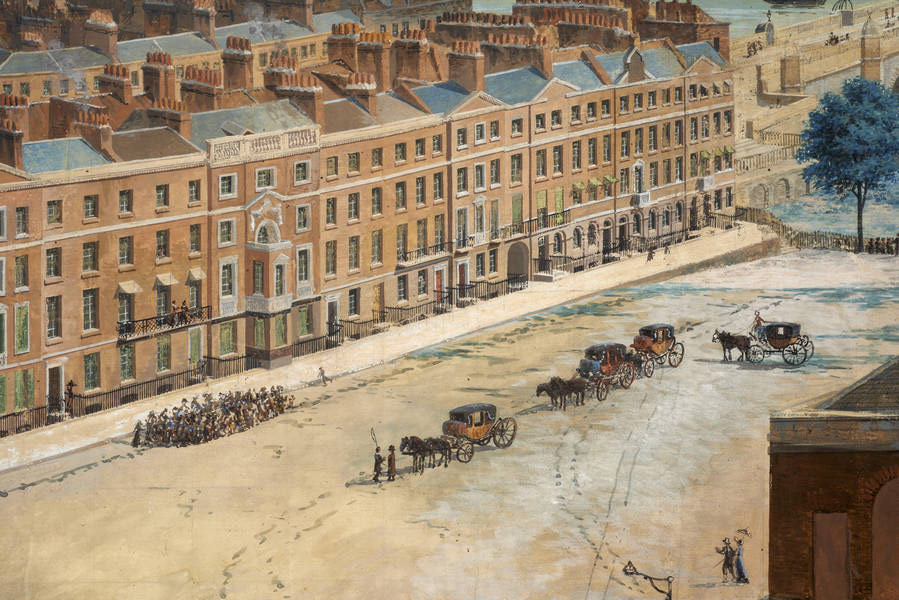 Detail: Carriages outside the Old Palace of Westminster

Prévost painted not just the buildings, but also many details of London's street life. These elegant horse-drawn carriages might have been used by wealthy peers or members of Parliament to travel to and from Westminster. 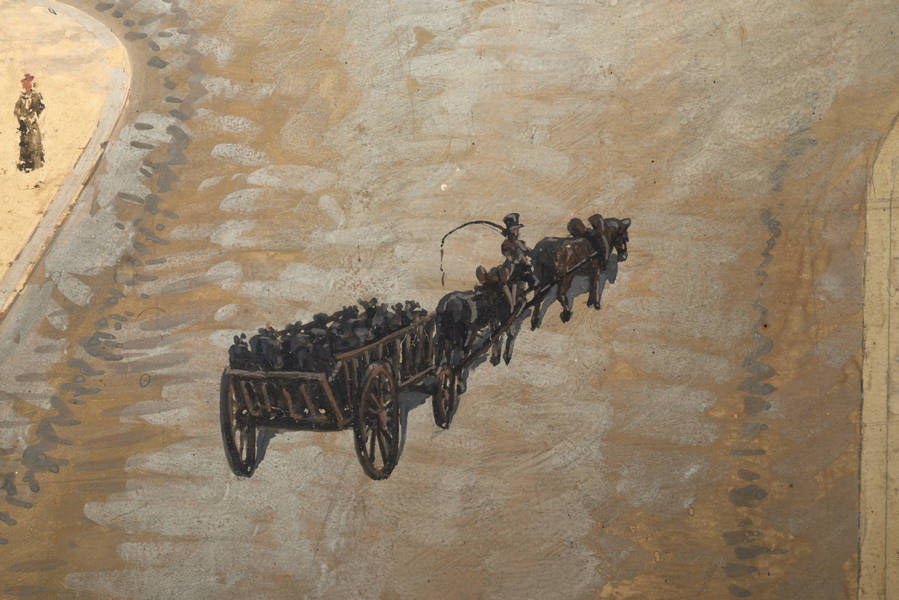 Just a few centimetres long, this tiny image of a horse-drawn delivery cart preserves a mundane scene from the streets of London that would otherwise have been lost. 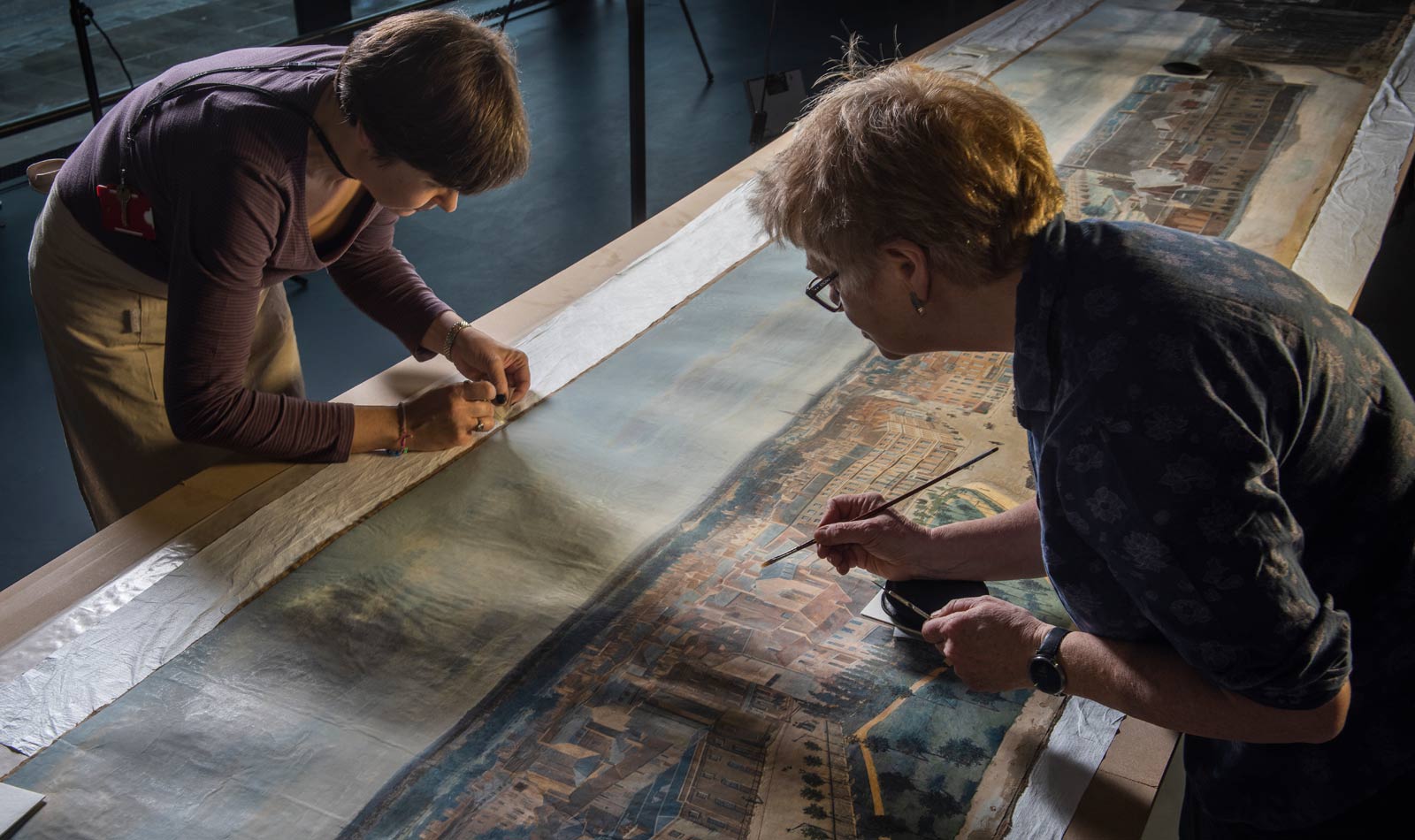 Conservators work to preserve the panorama at the Museum of London

Although it's in good condition for something over 200 years old, the panorama needed cleaning and some light restoration before going on display. 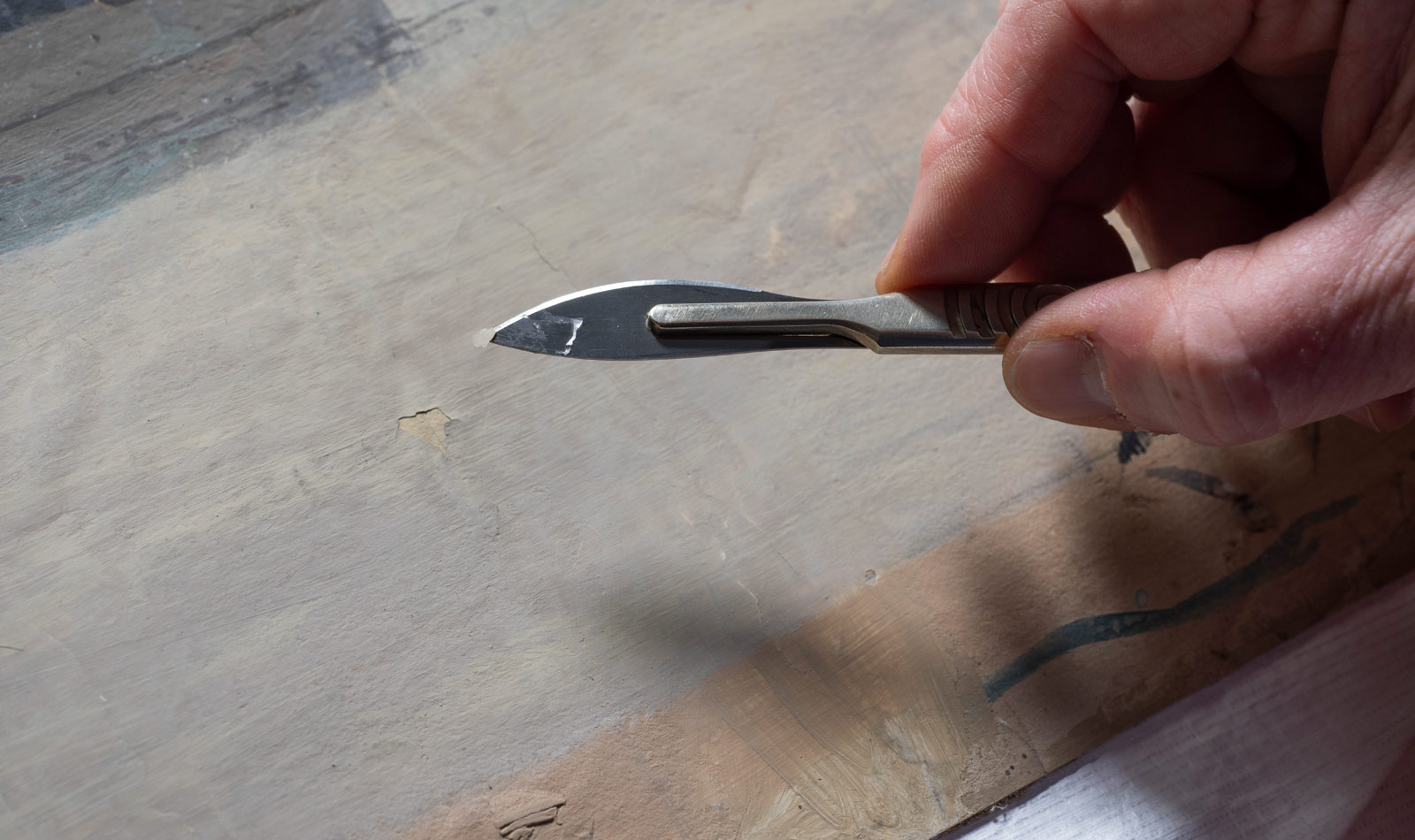 A piece of loose paint is restored to the panorama

In some small areas, fragments of the painted surface had become detached. Our conservators carefully re-positioned them and attached them back to the canvas.

In the early 19th century, panoramas were an extremely popular form of entertainment. These huge 360° landscape paintings gave visitors an immersive experience, placing the viewer into the scene and allowing them to experience it almost first-hand.

This is the most important topographical image the Museum of London has acquired since the Rhinebeck Panorama in 1998. Measuring 85 cm high x 605 cm wide, it is certainly the largest. Yet, it is merely the study for a now lost canvas. When Prévost’s larger panorama was first displayed in Paris, in a purpose built rotunda, it measured approximately 32 metres in diameter.

The panorama testifies to London’s magnetic attraction as a city and the capital of a world power. Its focus on London on as a seat of political power complements the Rhinebeck Panorama, which has mercantile London at its heart, exemplified by the City, the Pool of London and the wharves of Bermondsey. Furthermore, in contrast to the Rhinebeck Panorama, which looks west, Prévost’s view looks in all directions at once, revealing an astonishingly low-rise city, punctuated only by church steeples and factory chimneys, and the dominating mass of St Paul’s.

The Museum of London acquired the panorama in July of 2018, and our conservators and curators have been preparing it for display.

The panorama was purchased with the help of the Art Fund, the Aldama Foundation and a group of individual donors, with additional support from Michael Spencer, the Leche Trust and other donors who wish to remain anonymous. 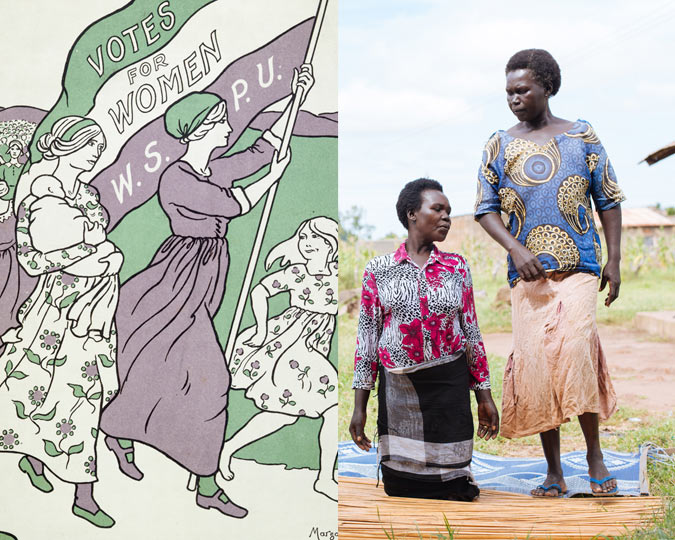 The fight for women's suffrage, then and now

How are the tactics of the Suffragettes used to fight for women's rights today? We teamed up with charity Womankind Worldwide to mark International Women's Day. 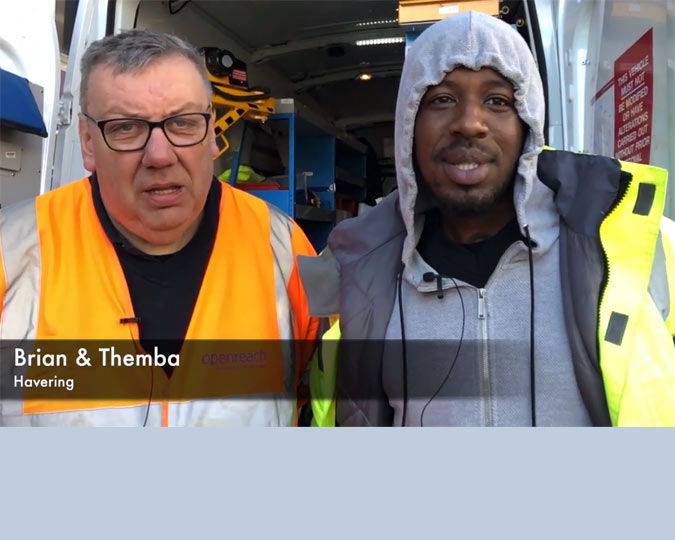 How has Brexit changed your relationship with London? Submit a video to the Museum of London.