When a member of the royal family gets married, it's always a big occasion. As Britain prepares to celebrate the wedding of Prince Harry to Meghan Markle, we look through our collection to see some of the ways Londoners have reacted to monarchical marriages over the past two centuries, from pageantry to protest. 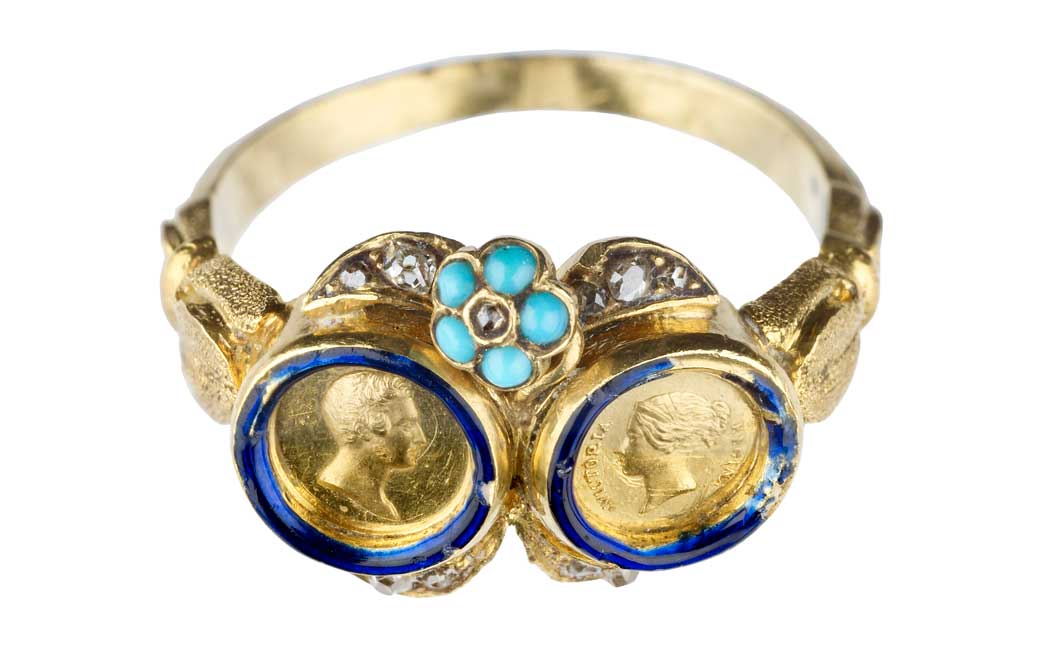 Ring commemorating the marriage of Queen Victoria and Prince Albert, 1840 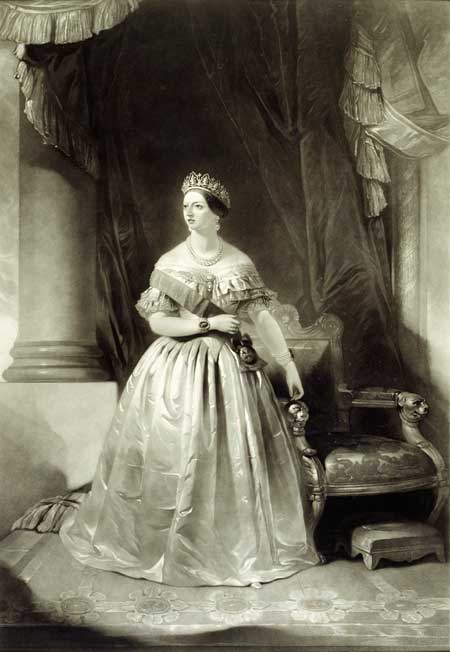 Queen Victoria in her wedding dress, 1857

This finger ring was made for the marriage of Queen Victoria to Prince Albert of Saxe-Coburg in 1840. This royal wedding, held in the Chapel Royal of St. James's Palace, London, set a number of precedents. It was the first royal wedding for over a century to be held in the afternoon, about 1pm, rather than at night. This drew huge crowds of Londoners eager to see and cheer the royal couple. It's also thought that the Queen's wedding dress, of Spitalfields satin, inspired the fashion for white wedding dresses. Up until then, most women had worn a brightly coloured dress to get married, which they could reuse on other occasions.

This ring is one of six dozen, all identical, ordered specially for the occasion from the royal jewellers Rundell, Bridge and Rundell. They were given out by the royal couple as wedding favours to friends and relations. The golden portraits are a pair of conjoined miniature medals, representing the union of the royal houses of Britain and a German state. It's a reminder that royal weddings are always two-sided: private love between two people becomes a lavish public show, both because of popular demand and to reinforce the authority of the royal family. 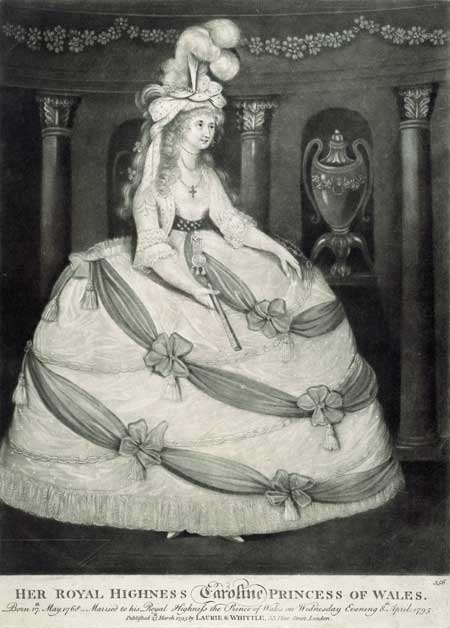 Caroline Princess of Wales in her wedding dress, 1795

Caroline was married to the future King George IV on 8 April 1795.

Queen Victoria was highly unusual among British royals in marrying for love. Victoria's grandfather, George III, had met his bride-to-be Princess Charlotte for the first time about six hours before their wedding in St. James's Palace. This didn't seem to stop them from being happy together. In contrast, George's son George (of Brighton Pavilion fame) married his cousin, Caroline of Brunswick, only to clear his debts. Their marriage became a public disaster, and George IV was deterred from divorcing Caroline for adultery only by her threat to expose his own infidelities.

The obvious affection and loyalty between the young Queen Victoria and Prince Albert gained great public support. After Albert's death in 1861, the Queen withdrew from all her public duties for almost a decade. Initial sympathy from the British people turned into anger at the absent Victoria, and by 1870 there were anti-monarchical Republican rallies in Trafalgar Square. Londoners demand that royalty put on a show. 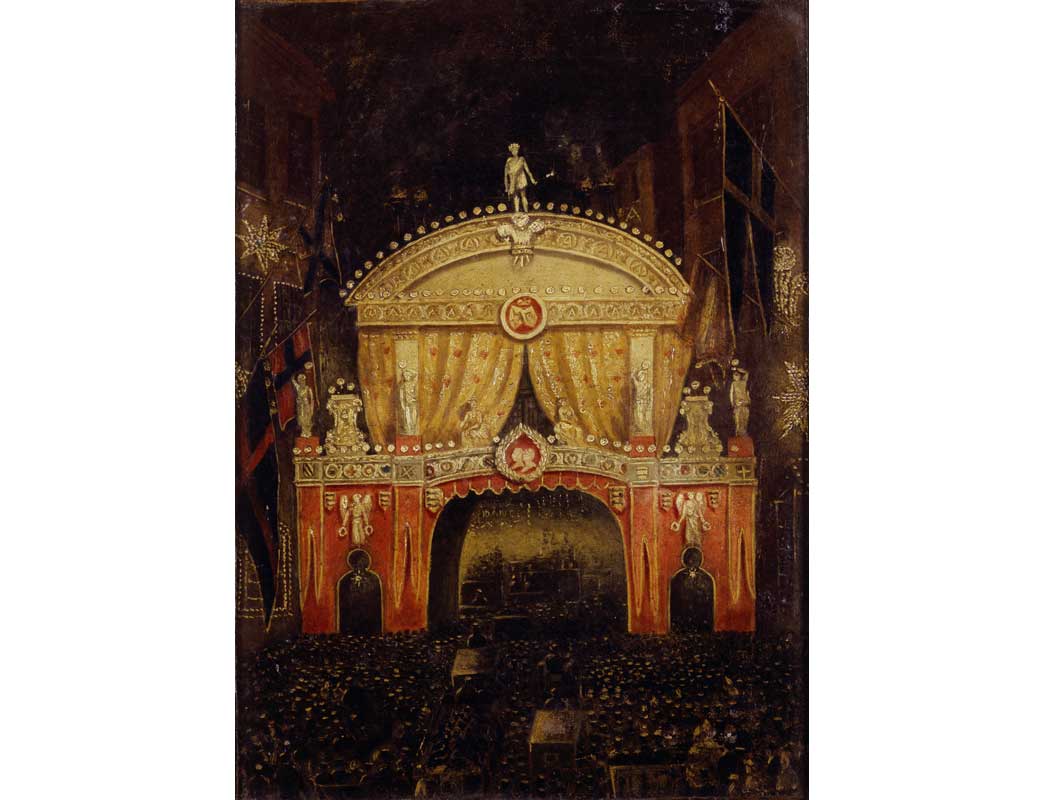 Temple Bar Illuminated for the Marriage of the Prince of Wales, 11 March 1863 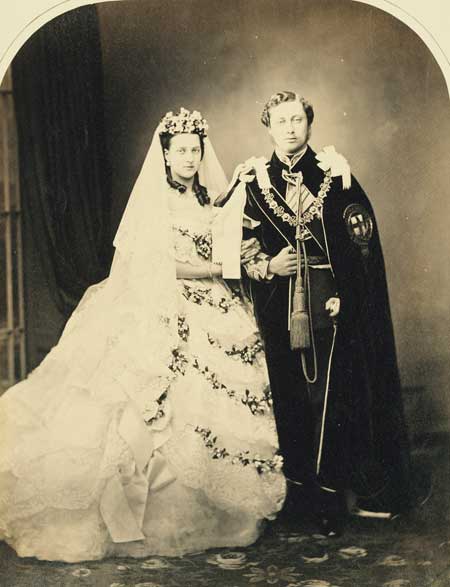 Prince Albert Edward was married at the age of 21 to Princess Alexandra of Denmark, who was just 18. Public domain.

Another royal wedding followed soon: Queen Victoria's son, Prince Albert Edward, to Princess Alexandra of Denmark, in 1863. Princess Alexandra's arrival to Britain was celebrated by a procession through London, passing the gateway of Temple Bar, one of the historic gates of the City of London. Here, Temple Bar is shown at night, richly decorated by red and gold hangings, with people and vehicles thronging the Strand to celebrate the royal marriage. The illuminations took a fortnight of preparation. The decorations included a medallion of the Prince and Princess in the centre, topped by a statue of Hymen, the Greek god of marriage.

Despite the spectacle on display in this painting, the wedding itself was neither a particularly large nor lavish one. In fact, it didn't even take place in London- something that was heavily criticized by the press, as large public crowds would not be able to view the happy couple. Instead, Albert Edward and Alexandra were married in St. George's Chapel, Windsor Castle- the same church where Prince Harry and Meghan Markle will tie the knot on 19 May 2018.

This venue was too small to invite the many foreign and British dignitaries who had hoped to attend the Prince of Wales's wedding, and it wasn't the most cheery of parties. The British court was still mourning Prince Albert, Victoria's husband, who had died less than two years before. Guests were therefore banned from wearing bright colours, and women's dresses had to be grey, lilac, or mauve (with the exception of the bride). 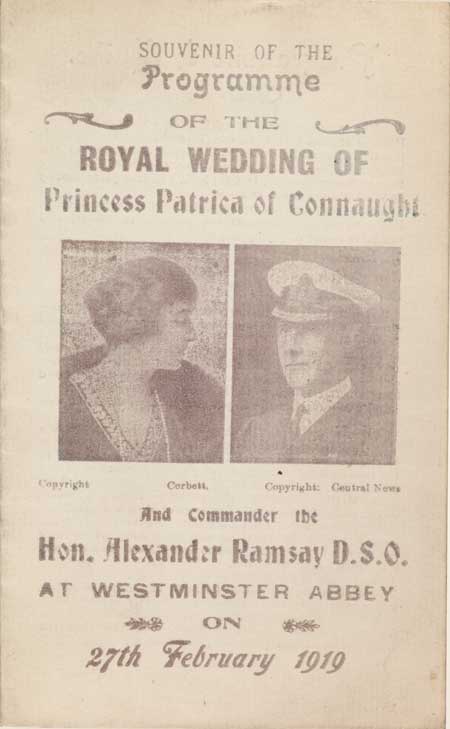 Souvenir programme published to commemorate the wedding of Princess Patricia of Connaught, 1919

As the Victorian period went on, the royal family became more adept at staging a show. Queen Victoria's many children and grandchildren offered a great number of royal weddings, which began to be held in larger and more public London churches rather than private chapels.

This cheaply printed souvenir programme was published to commemorate the wedding of Princess Patricia of Connaught to Alexander Ramsay at Westminster Abbey on 27 February 1919. Princess Patricia, the granddaughter of Queen Victoria, was one of the most eligible women in Europe, but unlike her fellow princesses she chose to marry for love rather than accept a match with a foreign royal. She married Alexander Ramsay, who was hardly from the gutter- he was a Commander in the Royal Navy and the third son of the Earl of Dalhousie. Still, the difference in rank was enough that Alexandra asked to be allowed to give up her royal status upon her marriage. She entered Westminster Abbey on 27 April 1919 a princess, and left it as a mere Lady, daughter of a Duke.

A princess surrendering her title to marry a commoner captured the public imagination, and crowds thronged the streets of London. Meghan Markle of course is also a commoner, although there is wide speculation that she will be granted some kind of noble title on the occasion of her marriage to Prince Harry- almost the opposite of Princess Patricia. 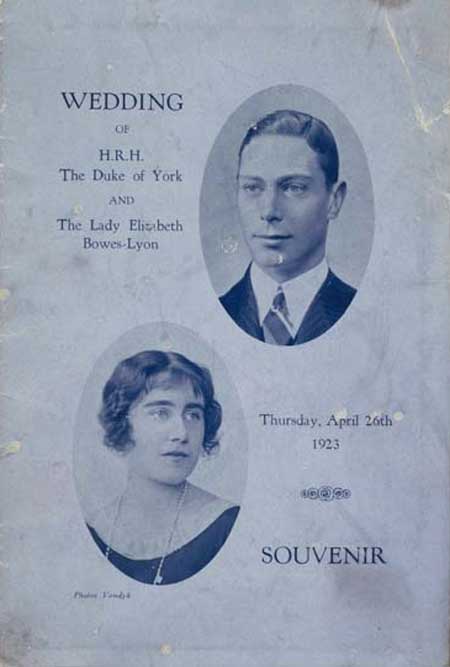 Here's another mass-produced wedding souvenir, from the marriage of the future King George VI and Elizabeth Bowes-Lyon, Prince Harry's great-grandmother.

The very cheapness of this programme, which was sold for just one penny, indicates the wide popular fascination with the royal family amongst the London crowd. These were quickly and cheaply mass printed for all royal events that took place in London in the early 20th century.

Londoners were encouraged to support these shows of royal spectacle, images of which were sent around the world, by providing a ready made flag waving, patriotic crowd. It helped bolster the reputation of Britain as an imperial power, ruled by an Emperor. Onlooking crowd for the Royal Wedding, 1981 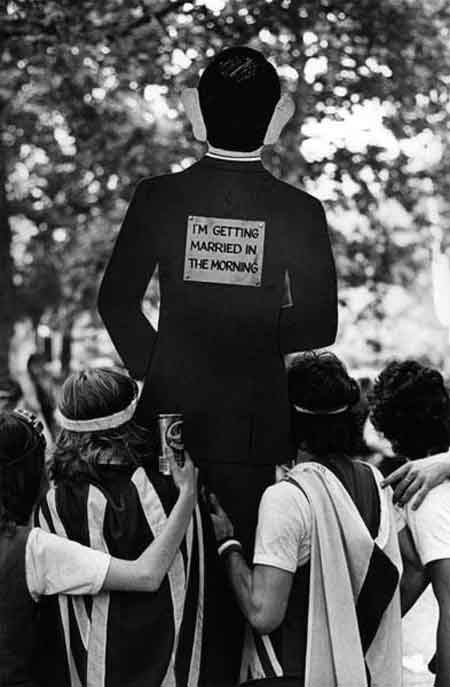 Spectators at the wedding of Prince Charles and Lady Diana Spencer, 1981

These photos from the crowds who assembled to watch the wedding of Prince Charles to Lady Diana Spencer, on 29 July 1981, reflect that continued fascination. They also show the irreverence and cheekiness of the London crowd, with Prince Charles's prominent ears caricatured in one of the banners. The Museum of London collection, packed full of memorabilia from royal events, has plenty of flags, teapots and badges celebrating Charles and Diana. But it also starts to include more satirical and even anti-monarchical material, as the relationship of London to its royal family continues to evolve.

Three commemorative badges, one satirical, from marriage of Prince Charles and Diana Spencer

Produced for the marriage in 1981 Arrest of a suffragette attempting to reach the royal coach, 1913

Taken on 15 October 1913, at the wedding of Prince Arthur of Connaught to Princess Alexandra, 2nd Duchess of Fife

Not all Londoners have celebrated royal nuptials. A royal wedding is an implicitly political event: a private marriage is transformed into a public spectacle, a shared acknowledgement of how the monarchy is still central to the British constitution. This gives those with a political agenda a reason to protest, and a guaranteed audience.

This photograph was taken on 13 October 1913, at the height of the Suffragette struggle for votes for women. Every high-profile event, from parliament to the race-track, was an opportunity to promote the cause of female suffrage. The wedding of Prince Arthur, grandson of Queen Victoria, to his cousin Alexandra, was no exception.

A media report is typed on the back of the photograph, describing the scene:

Royal Couple Married. Woman's Dash for Coach of King and Queen. As the coach in which were the King and Queen was proceeding along the Mall on its way to the chapel, a woman broke through the lines of police and made a dash for the coach. Two constables just overtook her as she got alongside. She is stated to have had one foot on the step, and had lifted up her right hand, which contained a bundle of papers when one of the constables gripped her wrist and with his other arm caught her round the waist and pulled her away. In the custody of the two officers, and followed by several detectives, she was escorted through the crowd, who loudly hissed her, and taken to Cannon Row Police Station

Just four months earlier, another Suffragette, Emily Wilding Davison, had protested at another royal event with far more tragic results: she went under the hooves of the King's horse on Derby Day, and was killed.

Mock bunting made at Republic's 'Not the Royal Wedding' street party, 29 April 2011

Some Londoners object to the very existence of the monarchy. The last British royal wedding, that of Prince William and Kate Middleton at Westminster Abbey on 29 April 2011, was protested by the group Republic, who have campaigned for a republican constitution since 1983. This mock bunting was made at Republic's 'Not the Royal Wedding' street party, where different attendees were asked to choose someone or something they wanted to pledge allegiance to rather than the Queen. Camden Council banned the original event which was due to take place in Earlham Street, Covent Garden. Eventually the street party took place in Red Lion Square and was attended by over a thousand republicans. 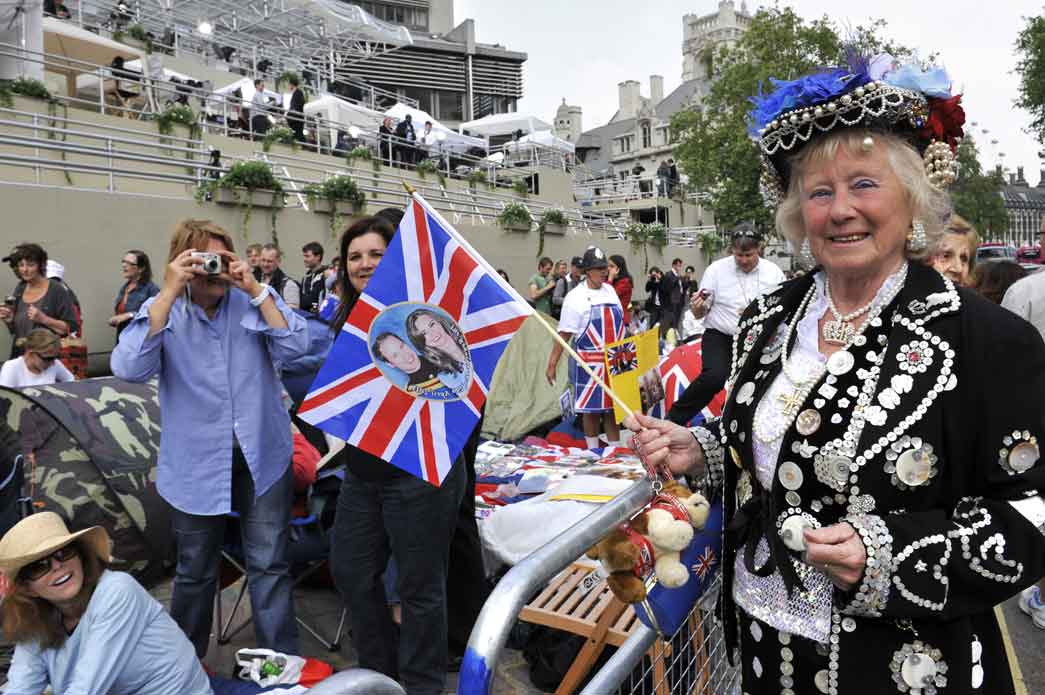 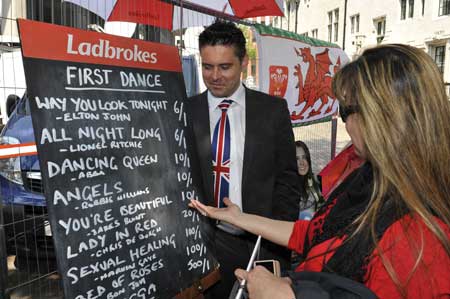 Photograph from the Royal Wedding, 2011

Taking bets on the newlyweds' first dance, on the eve of the Royal Wedding between Prince William and Kate Middleton, Friday 29 April 2011.

As these photos of the crowds awaiting around Westminster Abbey on the same day show, plenty of Londoners are still willing to celebrate the monarchy.

London has been a royal capital for nearly a thousand years, ever since the city of Westminster, seat of the monarch, was swallowed by the growing City of London. Over time, the personal rule of kings and queens has been transformed into the role of constitutional monarchs, theoretically above and apart from everyday government. Royal weddings have changed from political alliances into more personal, romantic affairs. But they are still the centre of attention, still an opportunity for public display, whether in support or protest. 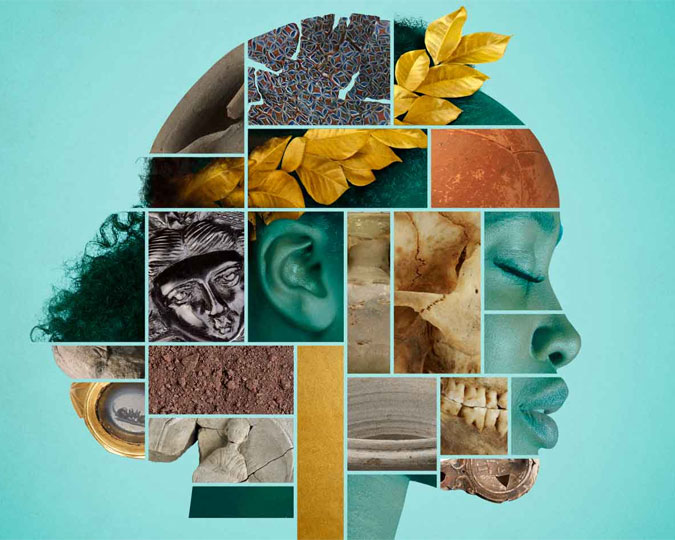