A teddy bear. A tin of Jamaican ackees. A milk bottle. Inanimate objects that tell stories and hold clues to a life. Read on to discover what memories these collection objects elicited for three Londoners affected by dementia who took part in our Memories of London programme.

As a social history museum, we love to tell the personal stories of everyday Londoners. Our collections are bursting with objects, from the seemingly ordinary to the outright bizarre. Through objects we can interpret broader histories but it is often the personal anecdotes that bring these objects to life.

Memories of London is our programme for those living with dementia. We offer a broad range of events and activities in the community as well as at our museums, including our award shortlisted workshops for under 5s and those affected by dementia. Through our range of learning programmes, we have met some remarkable individuals with extraordinary stories to tell.

London Lives, part of Memories of London, is a podcast series which uses objects from our collection to capture these stories. Developed in response to lockdown, and with the ambition to alleviate loneliness and stimulate conversation, London Lives uses our unique collections as a springboard to creatively tell the stories of every day Londoners. Here we will share with you just a few of the remarkable tales we have collected. 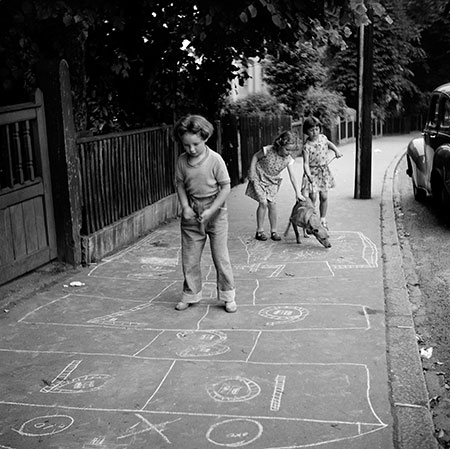 Girls playing hopscotch in the street

Helena sits in a comfy armchair as we speak with her in a care home in South London. ‘Oh yes, hopscotch,’ Helena’s eyes twinkle as she starts to share her memories of playing outside as a young girl in London. ‘Yes, we used to throw a stone and hop onto it.’ Helena is responding to a photograph of girls playing hopscotch taken around 1955, one of a body of 80,000 photographs in our collection by Henry Grant. A prolific photographer, Grant captured life on London’s streets from just after the Second World War until the early 1970s. A rich historic resource that offers a brilliant insight into London in the twentieth century.

Street play was common in post-war Britain. Many children, like Helena, would not have had access to many toys and used Second World War bomb sites as playgrounds. Helena recalls working for her mum at their grocer’s shop: ‘I had to spend my time in the shop talking to customers. Even though I was a child my mother expected it. In the evening we’d play with a ball’ she smiles. ‘My friends would knock on the door…. “Coming out to play Helena?” they would say’. 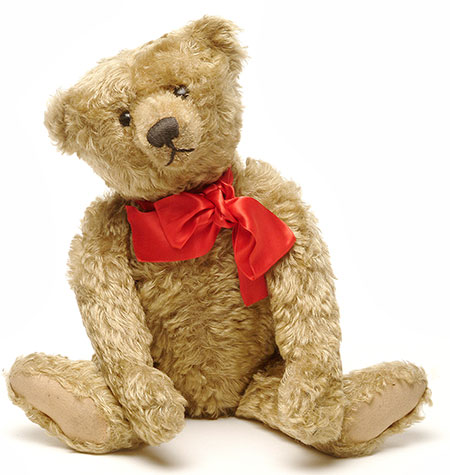 Helena certainly didn’t own one of these Steiff teddy bears in our collection. Made as a present in 1907 this bear makes a growling sound when its stomach is pressed and has jointed arms and legs. The name ‘teddy’ bear comes from a cartoon of US President Theodore ('Teddy') Roosevelt, who refused to shoot a tethered bear! ‘He looks quite sad,’ Helena says, responding to an image of the Steiff teddy bear. You can find out more about Helena’s thoughts on this bear and her Blitz evacuation story in our London Lives podcast Mr Bernie Ginger Bear.

Hubert also has clear memories of post-war Britain. Hubert now lives in the borough of Brent and we talk to him through video link. He arrived in the ‘mother country’ from Bombay, Jamaica in 1952. ‘That’s what we were told’ he comments, ‘it was the mother country, so everyone was excited to come to see what the mother country looks like.’ He chuckles as he continues to recall his first impression of London, ‘the only thing we had with chimneys [in Jamaica] was the bakeries – so I thought there were loads of bakeries when I saw all these chimneys in London!’ 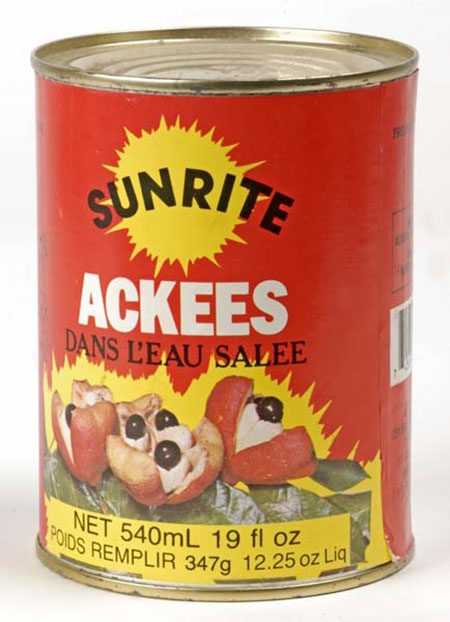 Hubert, like many, came to the UK as part of the call to rebuild post-war Britain. With him he brought his rich Afro-Caribbean heritage, including some delicious food dishes. ‘Yes I like ackees’ he says, responding to a tin of Sunrite ackees bought in Safeways, Islington, and imported from St Catherine, Jamaica, which forms part of our collection. ‘When I came here there were a couple of West Indian shop keepers. They used to import things and sell it to us… If there’s anything you want from Jamaica then they’d import it. So I could eat ackees and saltfish, the national dish of Jamaica.’

Hubert worked as a farmer in Jamaica and goes on to speak fondly of his experience of cooking at his farm in Jamaica. ‘When I was on the farm in Jamaica I used to cook – what we call bush cooking. Peel your potato, banana, whatever, and put it in there, and a big hunk of pork and leave it to cook…and while you’re working it’s there cooking. And you’d never bring plates from home to share it out…you’d use banana leaves!’

Hubert’s first encounter with work in London however was not so favourable. ‘I can remember when I came to London,’ Hubert continues, ‘and my niece’s husband took me to the labour exchange in Edgeware Road. The man turned around and said to me that there are no jobs for famers.’ He laughs ‘the man said if I needed help money-wise, he said that my friend could help me out! That was what I met at the labour exchange on my first outing in London.’ You can listen to more of Hubert’s story of his migration to London and tasty tales of food heritage in our podcast From Curry to Carnival.

A popular job and a common sight in post-war Britain was the milkman with his milk float. ‘My very first job was helping the milkman with his deliveries’ smiles Rosalind, who lives in Wandsworth. We are showing her this pint milk bottle which has a printed notice reading ‘use your milkman don't let him become a thing of the past'. This bottle is from the early 1980s when the popularity of doorstep milk delivery was starting to decline. ‘We used to cover areas between Brixton SW9 and Herne Hill SE24. We used to live on Dulwich Road SE24 and that is where my work with Charlie the milkman started,’ Rosalind recalls. ‘He used to pick me up outside our house, I used to sit in the milk float with the milkman (I had to be up at about 5.30am) and we would go up and down the roads delivering the milk, the odd grocery and collecting the empties.’ 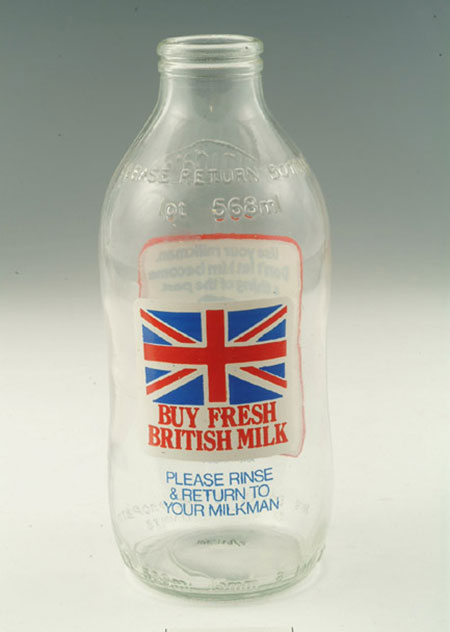 In 1970 almost 99% of milk would have been delivered to the doorstep in glass bottles. Today that number has plummeted due to the convenience and low cost of supermarket-bought milk.

Milk turned political in 1971 as Margaret Thatcher withdrew free school milk for children over seven. Free milk for children had been introduced in 1946 through the School Milk Act. ‘I remember milk at school in those little glass bottles, usually warmish…. Yuk!’ chuckles Rosalind. ‘But it was good for you and we drank it.’ Thatcher’s infamous move earned her the nickname ‘the milk snatcher.’

Rosalind remembers the different coloured milk tops indicating the amount of cream inside the bottle. ‘There were different grades of milk. There was the gold top which was definitely full cream, you could see the cream at the top of the bottle, then there was the blue top and the red top, also a silver top, I think the silver one was the one with the least cream.’

‘I felt so grown up as I was the first child in my family to earn’ Rosalind continues. ‘At the end of my Saturday round I had earned just enough money for a couple of comics, usually a Bunty, Mandy or Beano and some sweets to share as a treat between my brothers and sisters.’

A milk bottle, ackees, and a teddy bear are a just three of the objects that we have explored through our London Lives podcasts. Our vast collection holds thousands of stories and we are so grateful to our wonderful participants who have helped to shed light on just some of them. Listen to the podcast series and other memories sparked by the rich Museum of London collection

We are always on the lookout for more memories to be shared. If you would like to share your memories and stories around any of our collection items do get in touch with the Memories of London team by emailing [email protected] museumoflondon.org.uk. 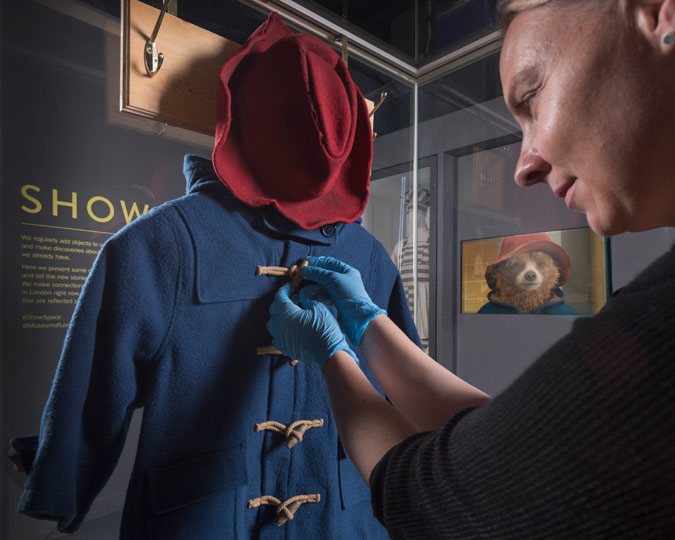 Paddington comes to the museum, latest in a long line of iconic children's characters. 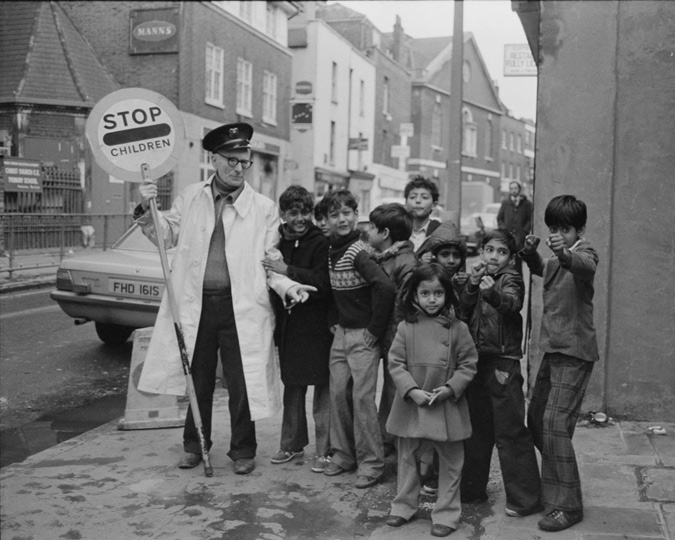 Where did Britain's crossing guards and lollipop ladies come from and where have they gone? Read our Discover article to find out. 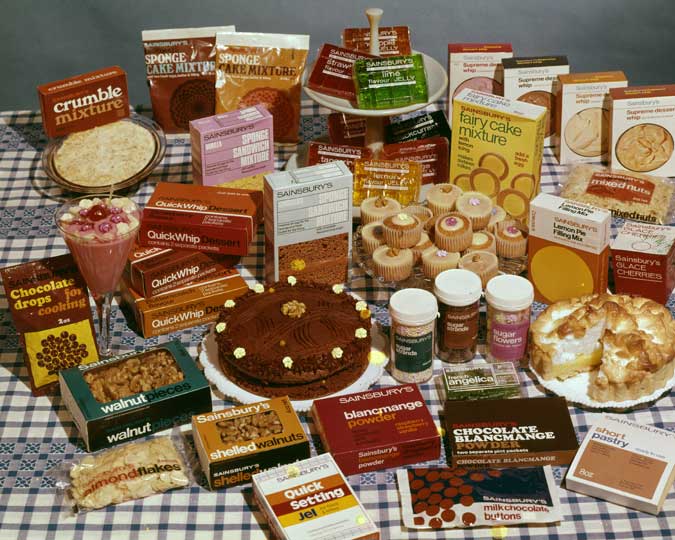 Step inside the Sainsbury Archive

Find out about the amazing collection of the Sainsbury Archive and how you can visit.