“We dined alone with Alice & Affie. Afterwards arranged our various photos & prints, brought back from Germany.”

Curator of Fashion and Textiles

This is how Queen Victoria ended her diary entry for 2 September 1858, following a day spent with her family on the Isle of Wight. Arranging, painting or just looking at photographs are occupations frequently mentioned in the royal journal. Both the Queen and Prince Albert were keen supporters of the new art of photography, which had emerged when they were both their early 20s.

Searching the Royal Collection Trust database for photographs acquired by Queen Victoria brings up almost 7,000 objects. The royal couple collected seascapes and landscapes, images of cities, picturesque ruins and the odd hippopotamus, but first and foremost portraits of other royal personages. Victoria and Albert also commissioned photographic likenesses of themselves and their family from eminent practitioners of their day.

These photographs are a wonderful resource for the sartorially curious. Many early photographic techniques captured a wealth of detail which we can now zoom into using digital reproductions. This is what I have done with the two sets of stereoscopic daguerreotypes of the Queen in the Museum of London’s collection. Unlike many other early photographs in which Victoria appears in full figure, the stereoscopic portraits are almost close-ups.

The images were produced by Antoine Jean François Claudet. Born in France in 1797, Claudet had come to London as a glass merchant in 1827 before switching to producing daguerreotypes, learning the process from Monsieur Daguerre himself. At first based near Trafalgar Square and then Regents Park, in 1851 Claudet established a lavish photo studio, complete with stuffed parrot, at 107 Regent Street, not far from Piccadilly Circus. In the same year Claudet showed a number of inventions at the Great Exhibition as well as an intriguing ‘image of the moon produced during a clear night’ (you must check out this most wonderful example of Claudet’s lunar photography).

Our stereoscopic photographs might have been taken in April 1854, when Claudet wrote in a letter that he had had ‘the honour to be commanded by her Majesty to take my daguerreotype apparatus to Buckingham Palace in order to take her portrait for the stereoscope and this morning h[er] M[ajesty] has given me a sitting and I have succeeded to take four good portraits of her’. It is believed that this hand-tinted photograph of the Queen in evening gown, garter sash and a profusion of pearls and other jewellery was one of the portraits produced on that occasion.

I cannot quite see the Queen letting Claudet wait while she changed from outdoor clothes to evening attire accompanied by a rather elaborate coiffure – or vice versa. I am also wondering whether the Queen’s ruffled skirt was held out by a crinoline, which would suggest a date after 1854. Claudet was appointed ‘Royal-Photographer-in-Ordinary’ in 1853 and presumably had several occasions to photograph his royal client before his death in 1867. So maybe our photographs were taken another time? I am rather certain, however, that the Queen is sitting in a Buckingham Palace chair.

Let us have a closer look at the Queen’s clothes. Her skirt seems to incorporate deep ruffles, made of a light-coloured fabric, presumably silk, with a dark grid or check pattern, possibly overlayed with dark lace towards the edge. Check patterns were popular in the 1850s and the Queen was depicted wearing at least one other gown in that fashion. Her dress in our stereoscopic photographs reminds me a little of this example in our collection. Maybe the Queen’s gown also incorporated pagoda sleeves? Whatever sleeve fashion she adopted, we can only catch a glimpse of what is probably a fine cotton undersleeve gathered at the wrist and edged with lace, providing the background for the display of a charm bracelet. 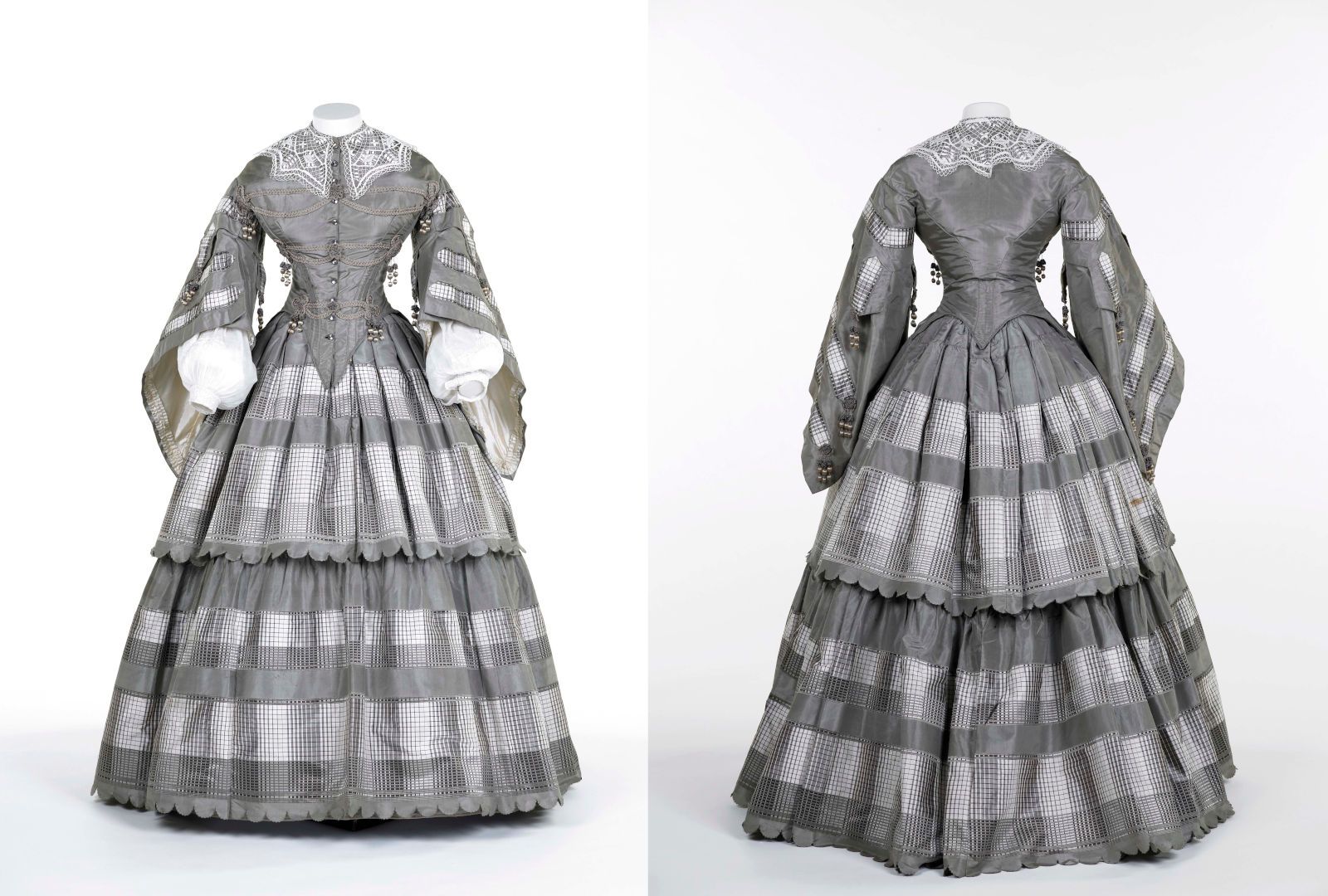 In one set of photographs the Queen seems to hold a parasol in her right hand. In the other, this seems to have been exchanged for gloves while in her left hand Victoria possibly holds the strings of a fan (or something else?). I was surprised to see so many rings on the royal hands, including, I believe the engagement ring in the shape of a serpent given to Victoria by Albert in 1839.

Left: A glimpse of a parasol stick.

Right: Gloves and the Queen's rings.

Three objects given to the Museum of London attest to the fact that the Queen was not averse to a fancy bonnet and what she is wearing in the daguerreotypes is no exception. It is hard to distinguish between the different strata of the bonnet’s decoration. Victoria’s face is framed by several layers of lace, abutting to what I think might be ruched velvet or silk ribbon. Further layers of lace seem to be joined by netting and ostrich feathers. The bonnet’s very wide silk ribbons with picot edge are left to dangle, rather than being tied in a bow underneath the royal chin. 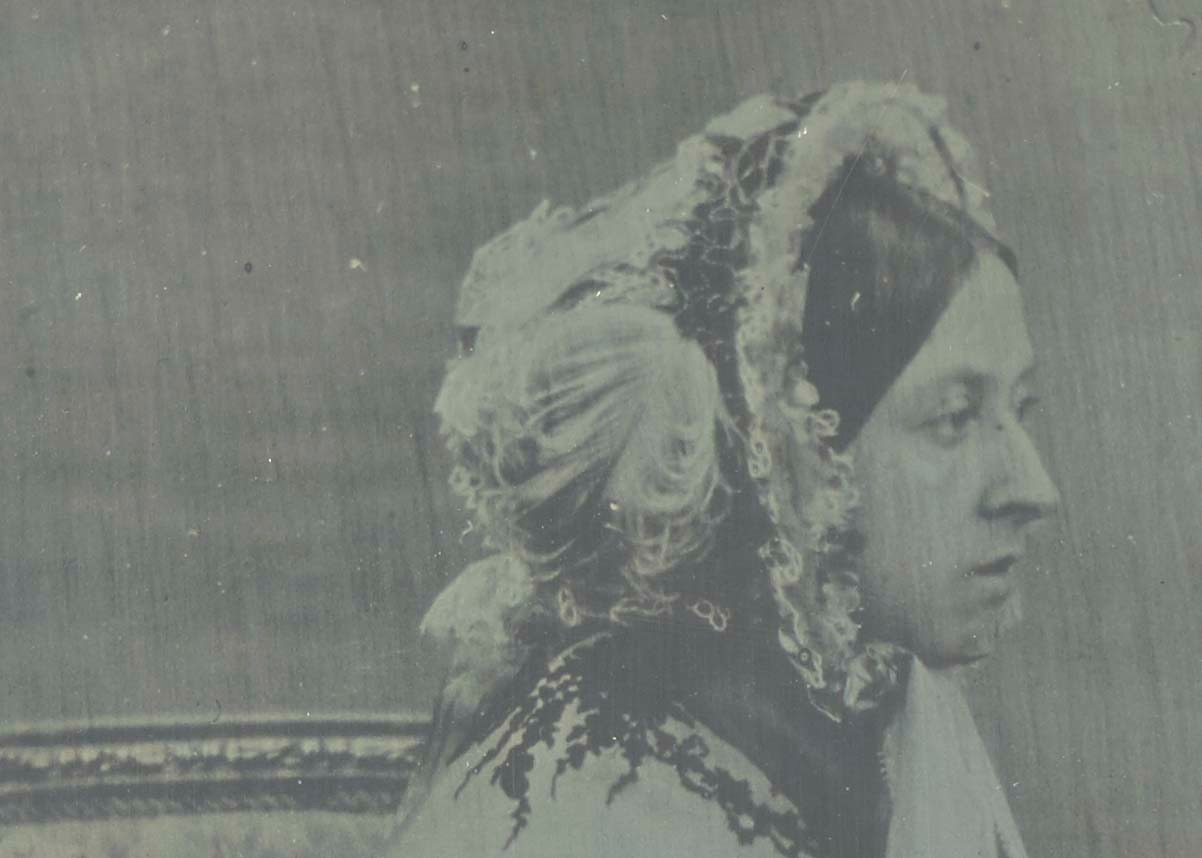 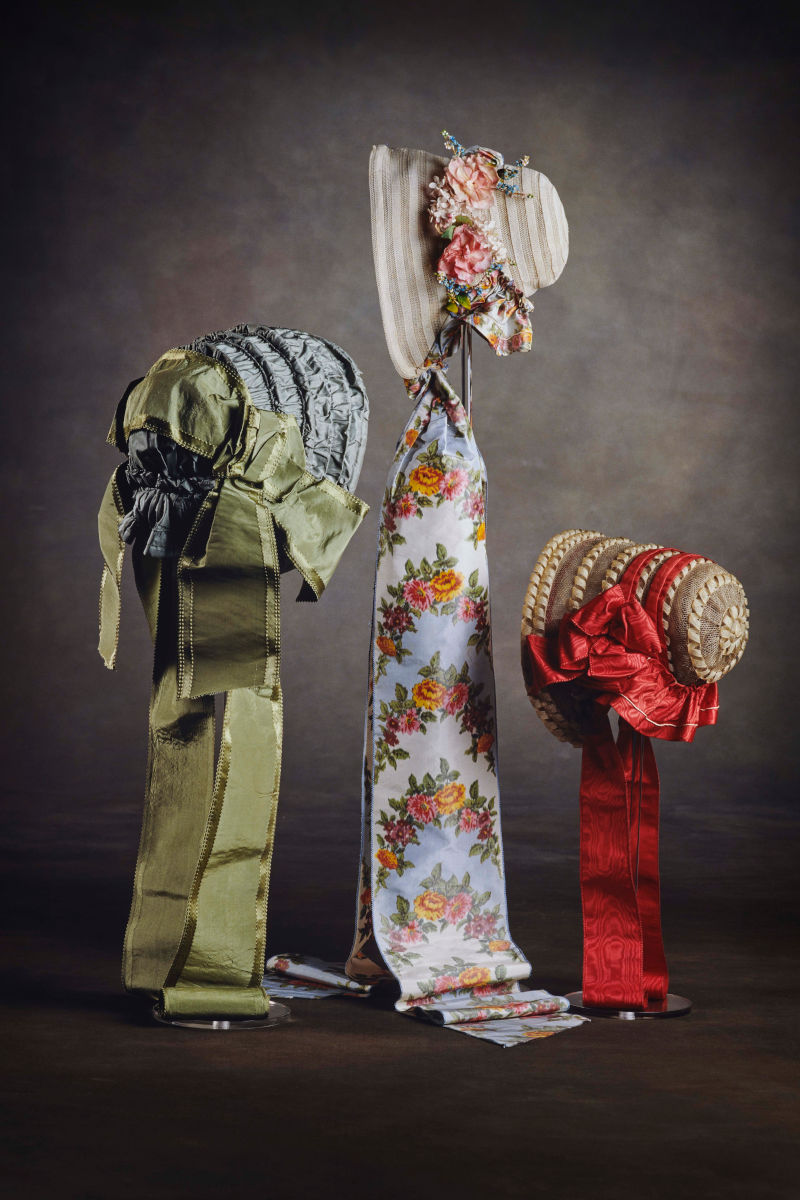 Finally to the pièce de résistance: the Queen’s cape. Initially I thought it might have been made of silk overlaid with cut-out lace shapes, or some sort of brocade. I often wonder whether people used to seeing black and white photographs would have known what colour a certain shade of grey represented. Looking for comparative examples of cloaks I had a lucky break. The Victoria & Albert Museum holds a similar, if not to say identical cape, dated to around 1860. It is made of blue (although in the photo more purple-looking) silk velvet with the decorative pattern created by black silk velvet pile. Only after I had seen the images of the actual cape, did I detect traces of the deep fringe in our daguerreotypes. Cloaks and capes accommodated the wide skirts of the middle of the century. Unlike bodices, capes did not have to fit the wearer closely and could be produced ready-to-wear. Presumably Victoria’s was not the only cape of this design in existence.

When daguerreotypes were first invented, their accuracy was perceived as a flaw. It was believed - at least by some - that photographic portraits would only catch on with the already beautiful. This turned out to be wrong on several accounts. Retouching, Photoshop and more recently filters made it possible to enhance oneself and others as successfully as painters had done before. And, as the large amount of surviving photographs attests, many did not subscribe to the silly notion that only those deemed beautiful should be allowed to have their likeness recorded for posterity. I am glad as – like Queen Victoria - I will happily continue to spend a lot of my time staring at photographs of people (and their clothes). 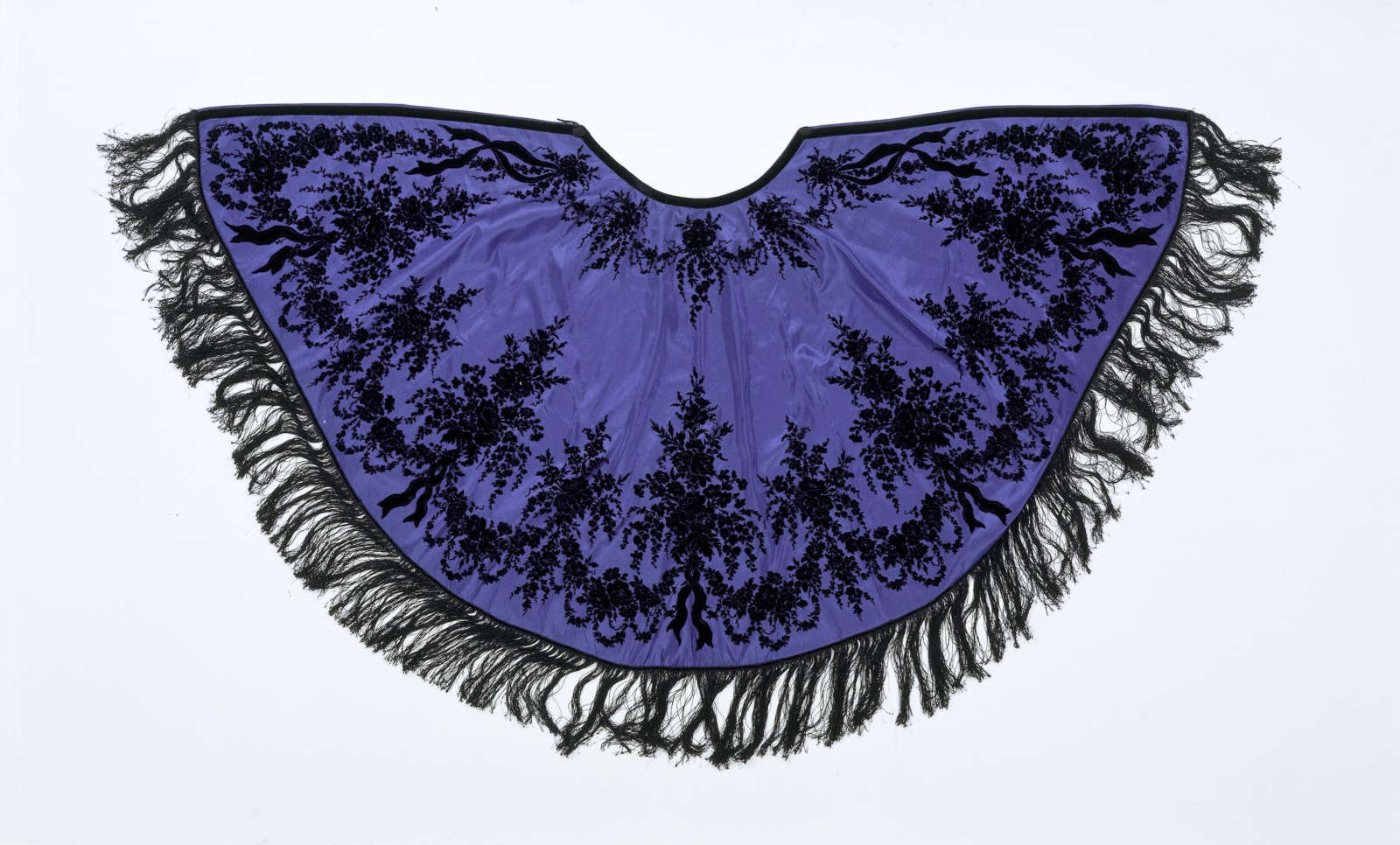 Curator of Fashion and Textiles 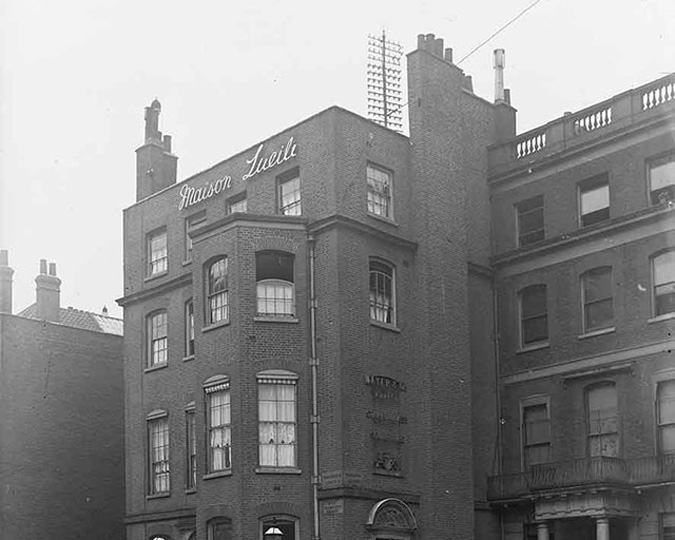 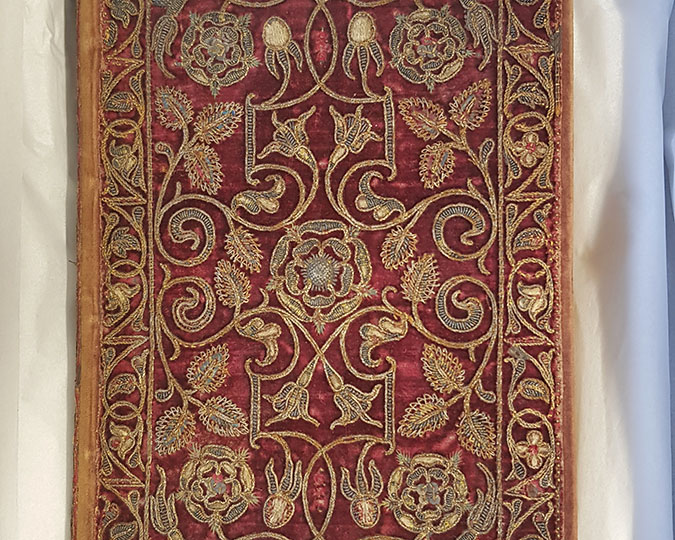 Stitches in Time: learning through remaking

Embroidery techniques old and new are used to study an unusual object from the Library Collection.