Our ‘Dub London: Bassline of a City’ exhibition explores the dub and reggae scene in London: but how did the rest of the world see London’s role in the reggae movement? Our very own Ben Travers recounts his experience in a London band that helped bring Dub and reggae music to Asia.

In the 1980s music promoters were looking for bands who could spread the word about dub and reggae to the far corners of the world, and they weren’t going to Jamaica, where reggae was born, they were going to London. Let me tell you the story of how I, as a rookie keyboard player, became part of the first band to do long-term touring and promotion of reggae music in Asia.

In many ways the early 1980s was grim. London, like the rest of Thatcher’s Britain, was socially divided and beset by unemployment and youth riots. Yet it was a great time to be young if you were into music. There were so many different scenes breaking through - new wave, new romantic, post-punk, jazz funk, synth-pop, etc. - and London bands were at the heart of many of them. 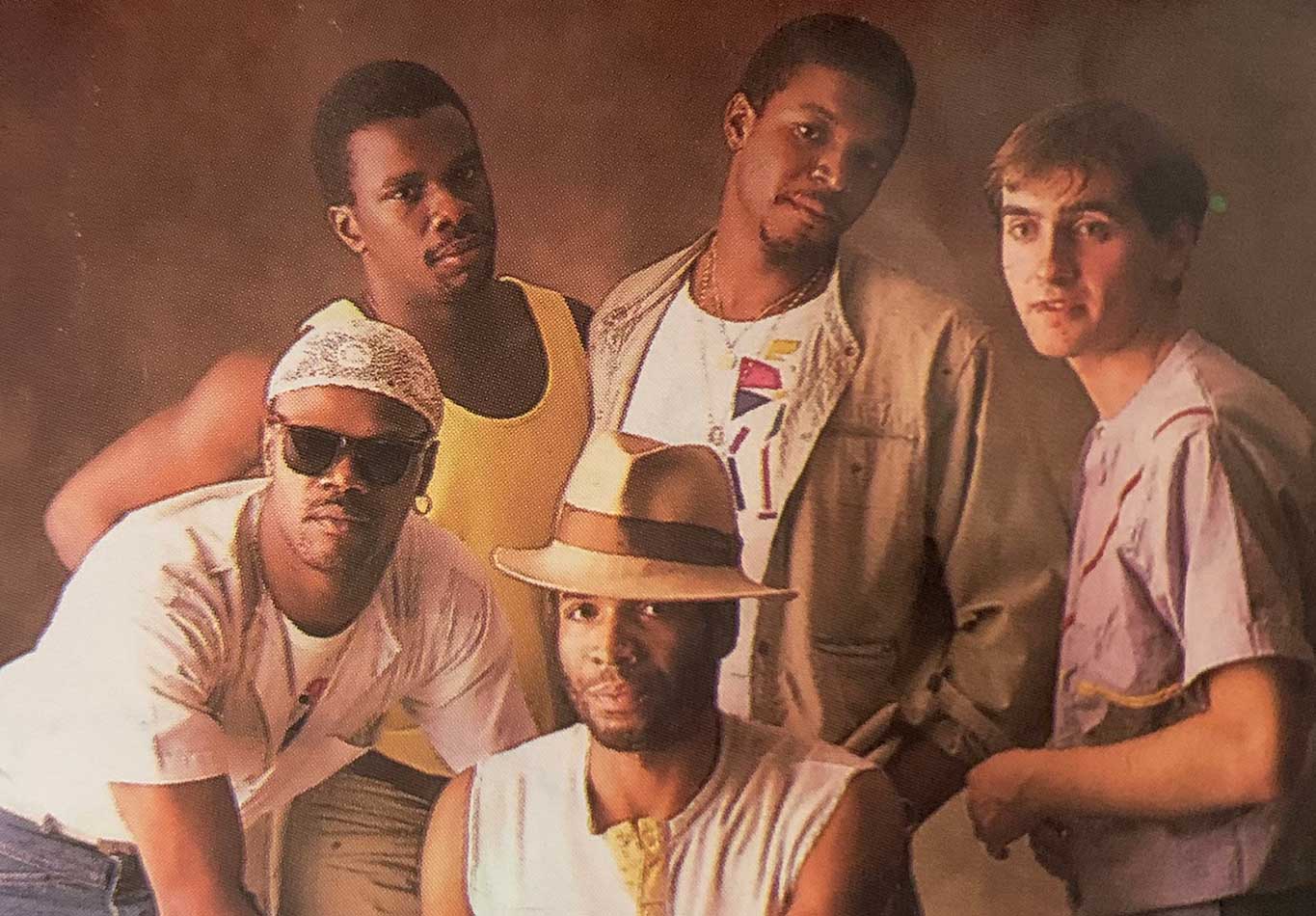 This was especially true of the UK reggae and dub scene. Aswad, Misty in Roots, Tippa Irie, Janet Kay, Maxi Priest – these were some of the big London names establishing their own reggae sound from the late 70s onwards. True, the West Midlands had a big role in spreading the word to white youth, with the ska revival bands and the introduction to dub reggae provided by the early albums of UB40. But nowhere was the number of reggae artists greater and competition more furious than in London.

One band trying to stand out from all the others was Dalston-based Scattarocks. They were desperate to switch their reggae up to a livelier and more energetic level. The band had two lead singers. ‘Scatta’ (Robbie Harriott), with influences as diverse as Bob Marley, Bob Dylan and George Benson, and ‘Sleeco’ (Anthony Jones), who apart from being an excellent reggae drummer had a beautiful soulful vocal. While the pair were building up an original and varied songbook of over 200 compositions, they added further variety by recruiting an accomplished rock guitarist. Rite Sounds records in Leytonstone spotted them and tours of the Caribbean and Western Europe followed.

When Japanese promoters went looking for a band to spread the word about reggae in Asia, they travelled to where the variety, competition and choice was the greatest - London. Scattarocks were ready for them. There were about 30 other bands in the audition but none came anywhere near Scattarocks in terms of energy and variety, and the gig was theirs.

When I joined the band Scattarocks had already completed their first Japanese tour. It was the end of 1984 and they had just received the call to return. I had big shoes to fill. Their previous keyboard player, Michael Martin, had been poached by Burning Spear and went on to become the top UK reggae keyboards session man, arranging the music for some of Aswad’s biggest hits.

Our base was the ‘Hot Corocket’ in downtown Tokyo, where the new plan was to alternate London reggae every 6 months with the type of Brazilian samba bands that had long been popular in Japan. It soon became obvious why promoters had gone for such an energetic band like Scattarocks. Reggae had the tiniest toe hold in Japan after Bob Marley had visited in 1979, but Japanese audiences were shy, and for virtually all of them reggae was a brand new sound. The highly accomplished indigenous jazz fusion musicians they were accustomed to just looked at their instruments and did not engage with audiences. It took all of Scattarocks energy and charisma to get punters up dancing and into the reggae vibe. 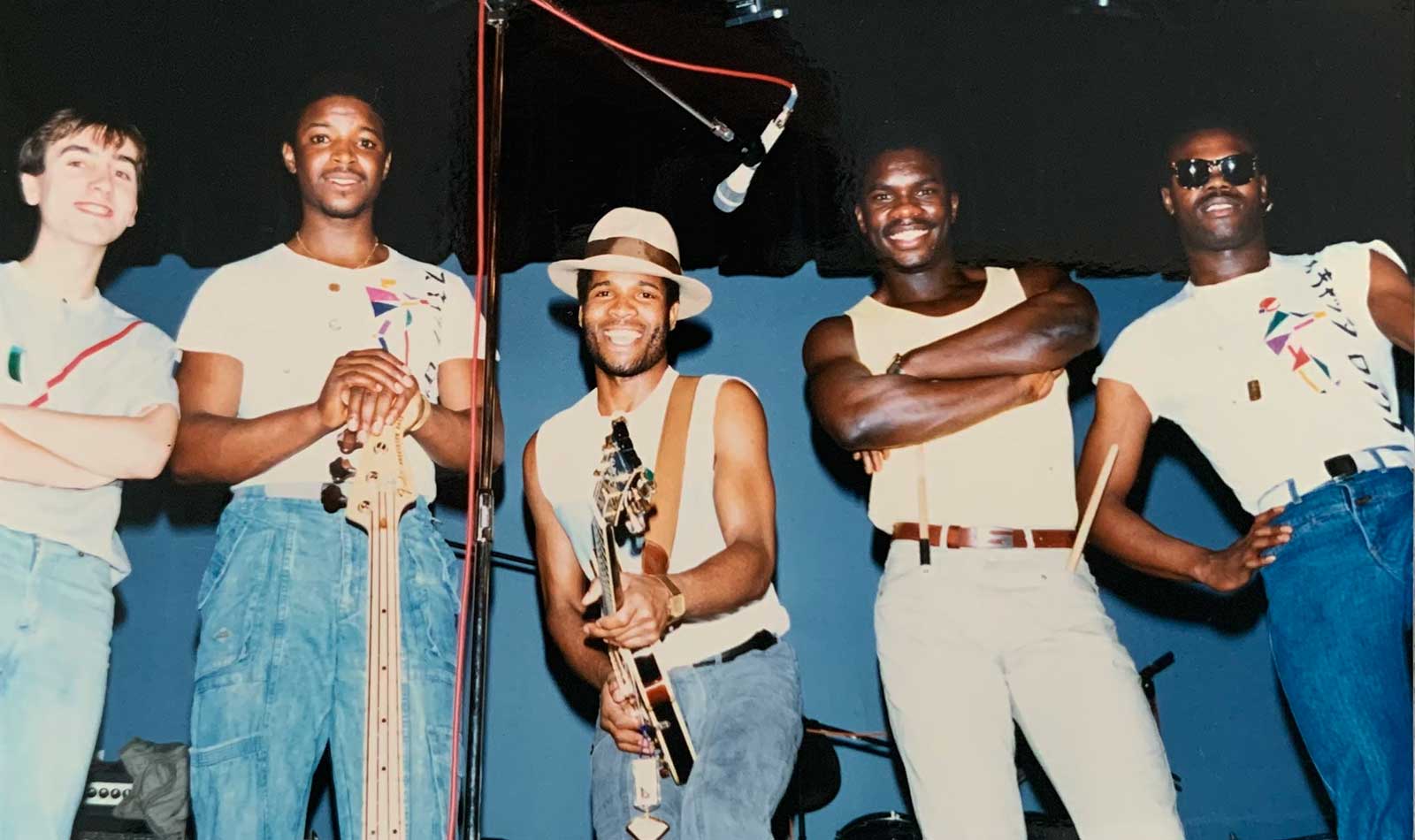 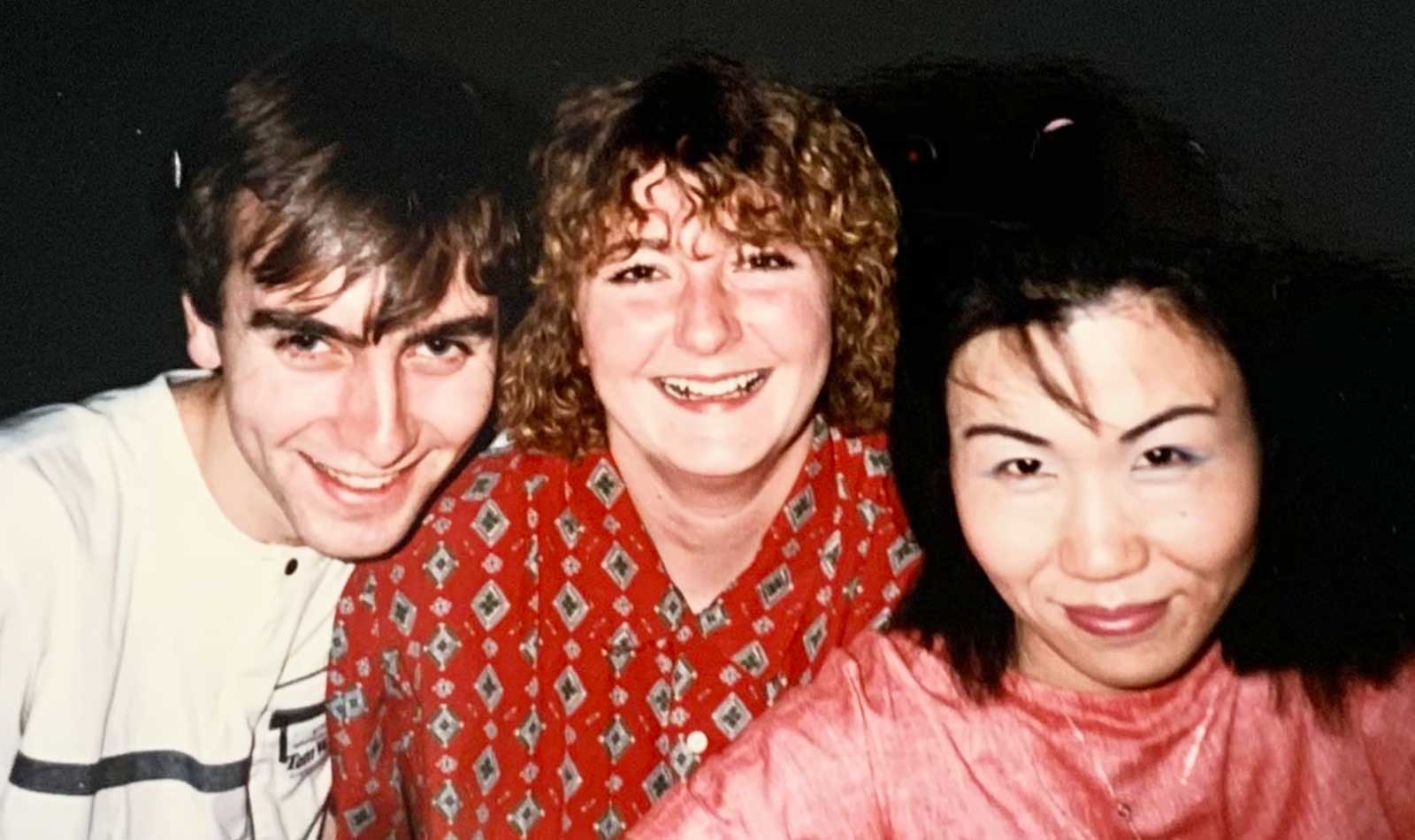 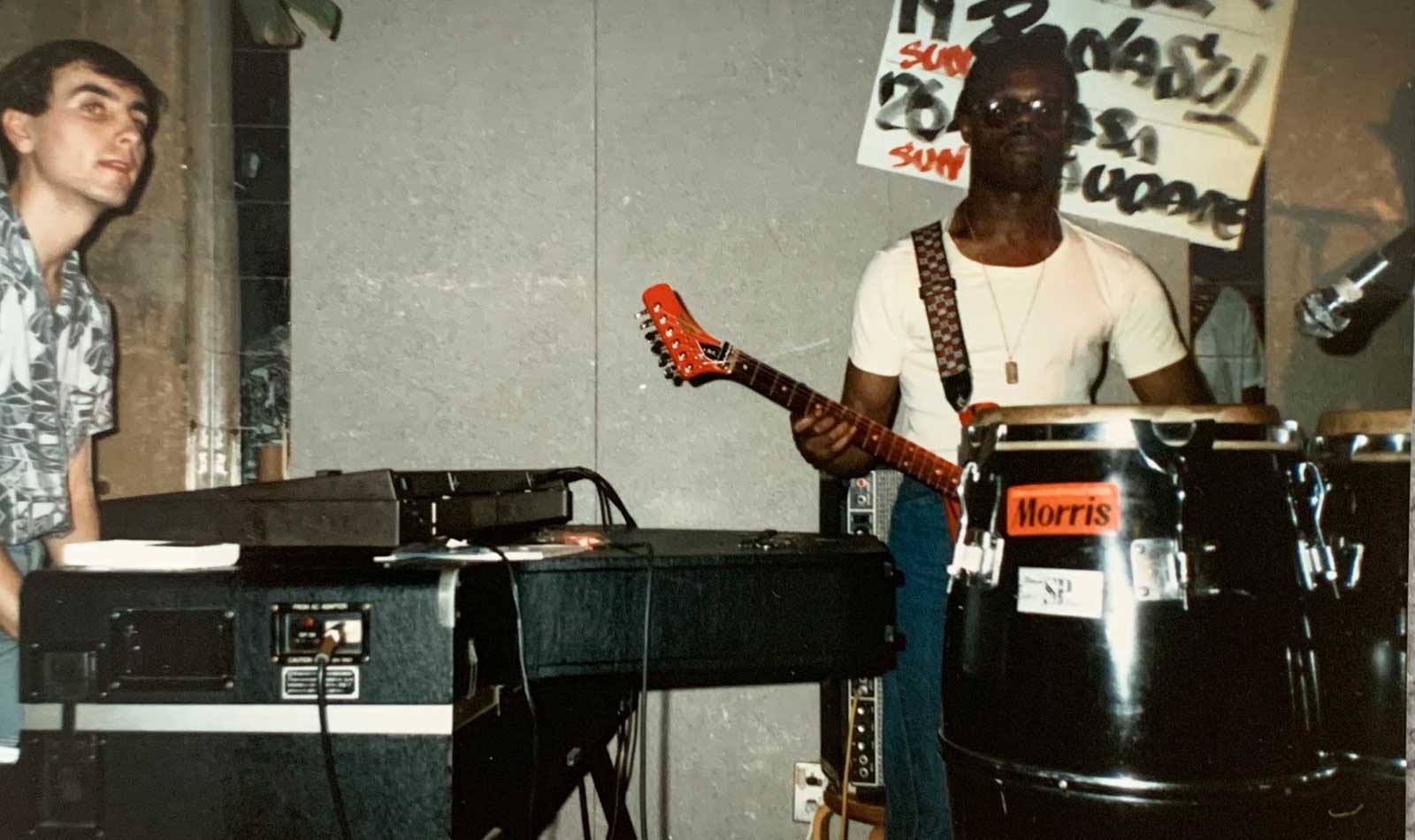 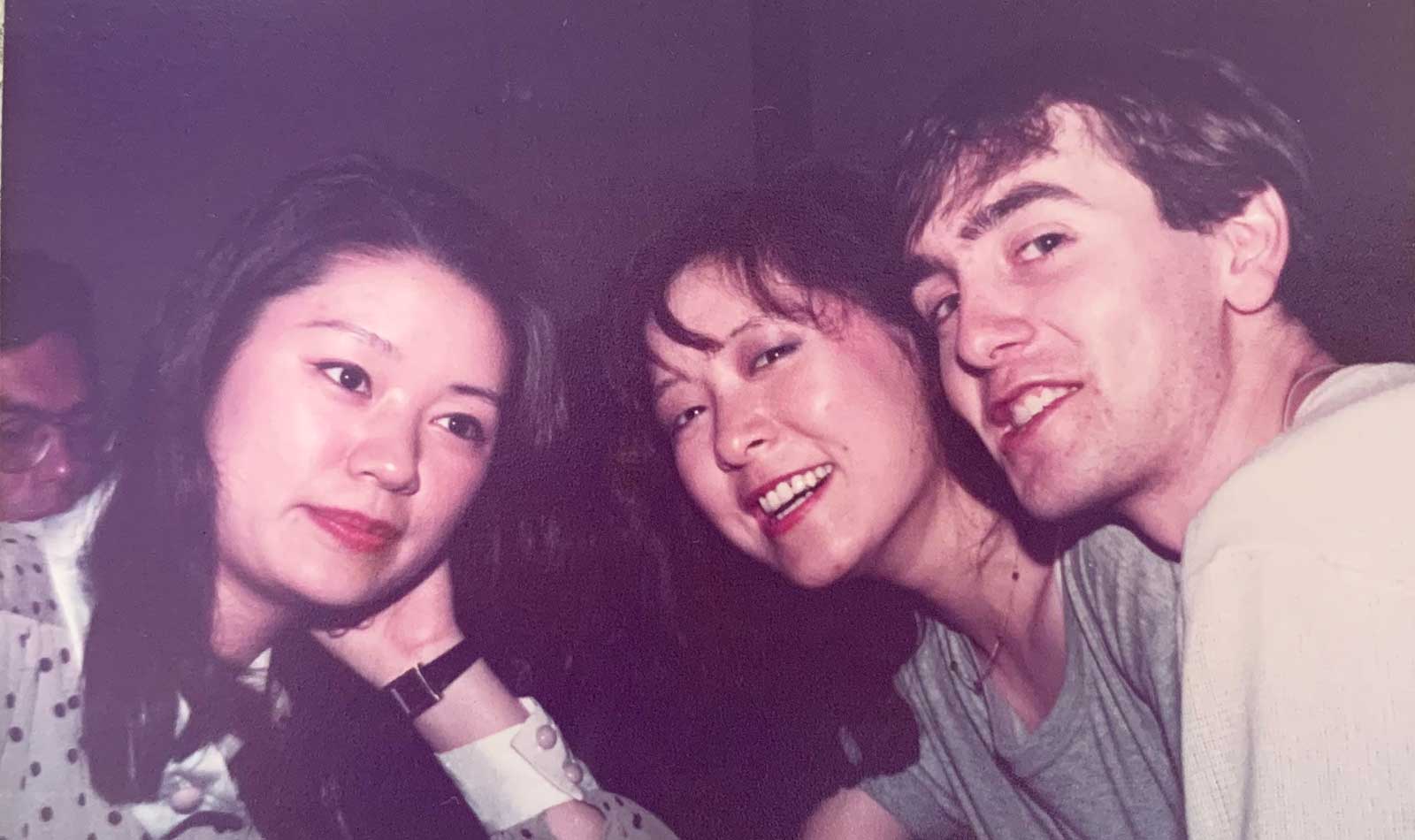 Tokyo, December 84 - June 85. 'If I smile hard enough he might get me free tickets for the next gig'

Japanese hours were long but the breaks between sets gave plenty of opportunity to get to know the locals, as well as the ex-pats and westerners passing through. There was a lot of banter about New York, Tokyo and London, and which world city was top dog. British bands were bossing the new international cable television channel MTV. The Japanese knew all about Britain’s social problems, but nobody could doubt that London was top when it came to music. Tokyo was playing host to the first long-term reggae residency in Asia, and promoters were liking what they were hearing. We were spotted by impresario Bernie Sutcliffe and at the end of the 6 month Tokyo stint he whisked us off to Hong Kong.

In Scattarocks Bernie saw the opportunity to spice up Hong Kong’s limited live music scene and at the same time further the mission to spread reggae to new Asian audiences. An introductory month of concerts sold out, and after a few months’ back in London, which included a legendary show-stopping performance at Notting Hill Carnival, the band was invited out again to Hong Kong at the end of 1985. It was a fascinating time to be to be there. The name of one of the venues we played at, “1997”, hinted at the upcoming transfer of the territory back to China after 150 years of British rule. It was indeed surreal to be travelling around one of the busiest and most cosmopolitan commercial centres in the world in double decker buses that looked like they belonged on the streets of an English provincial city. 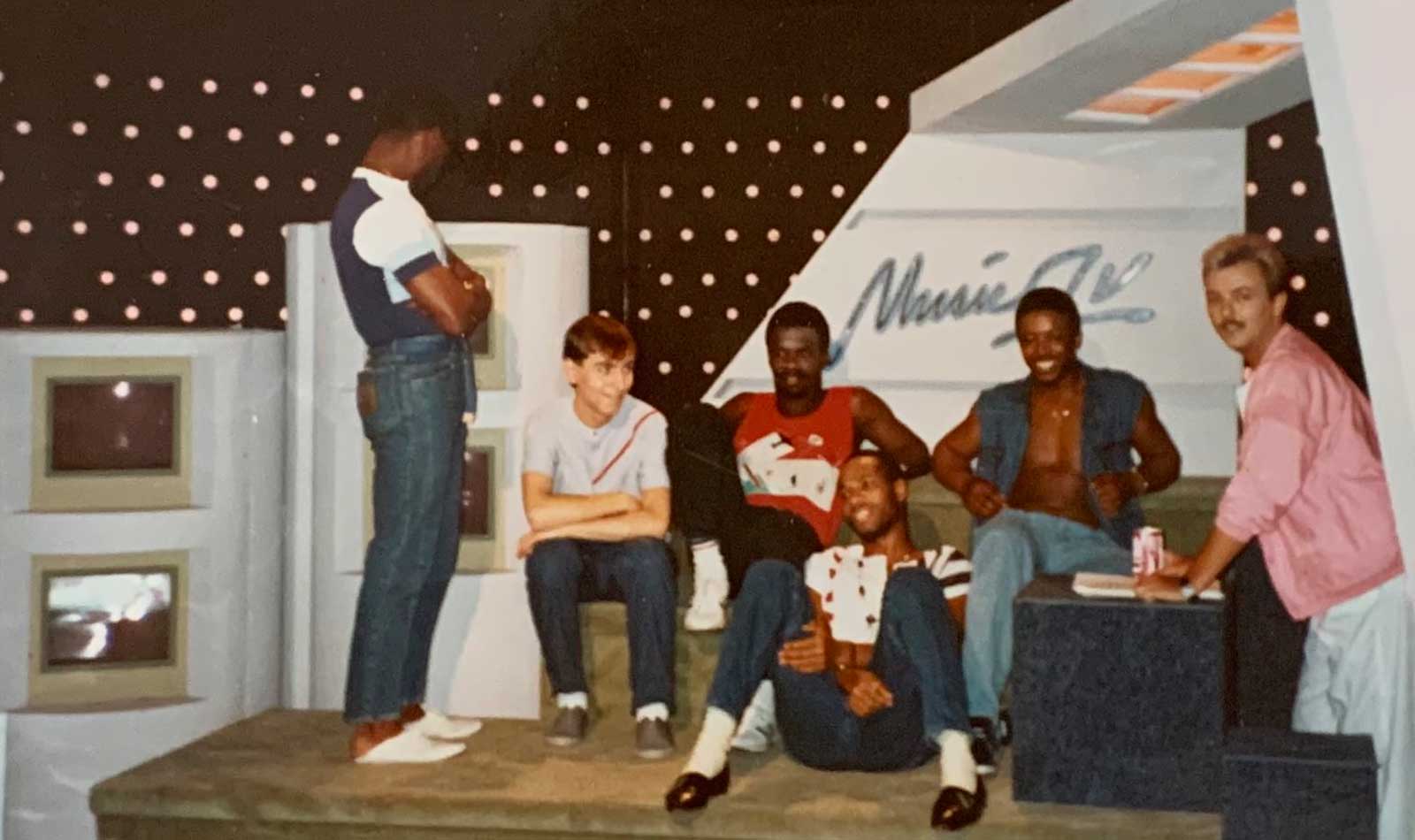 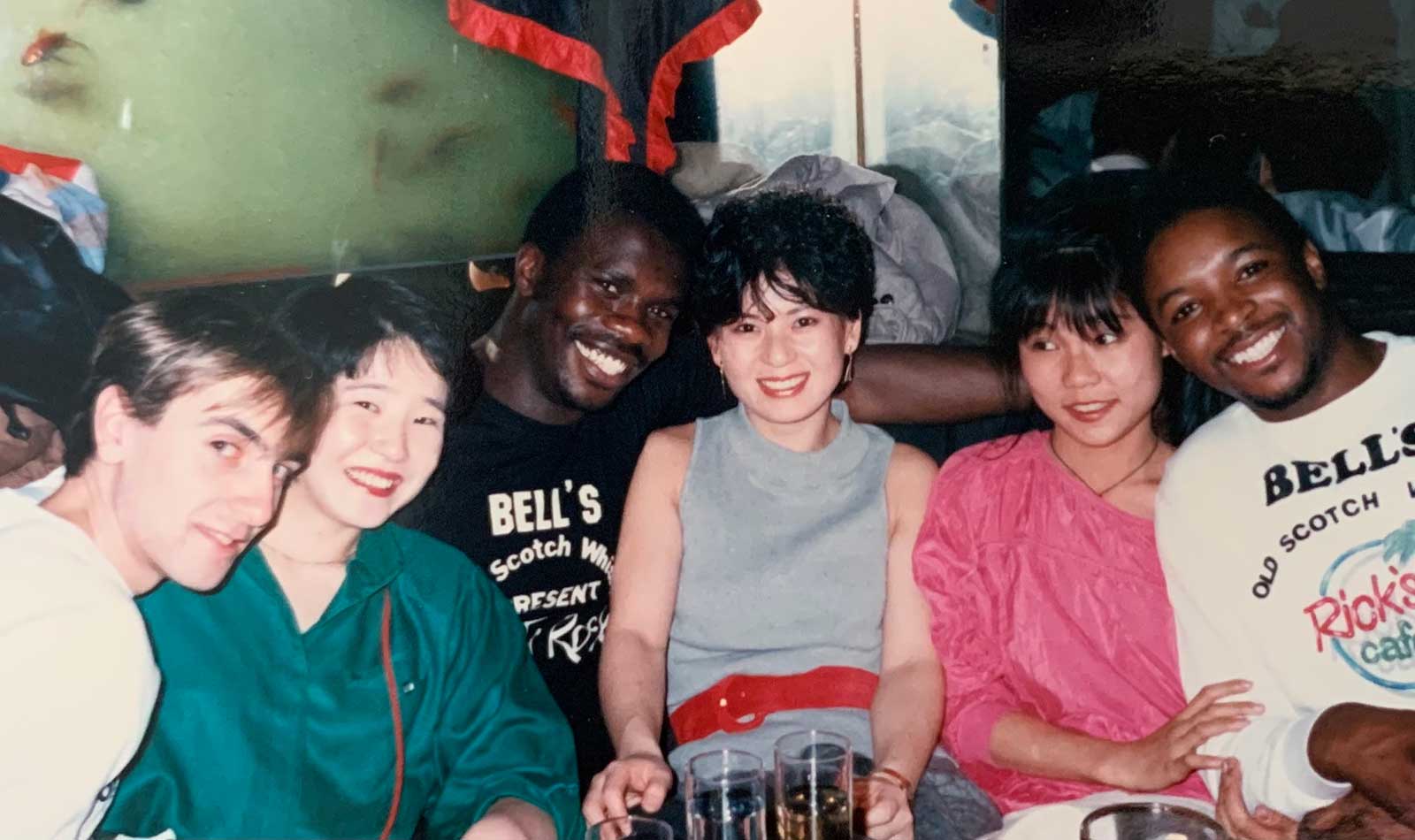 With fans at the night club 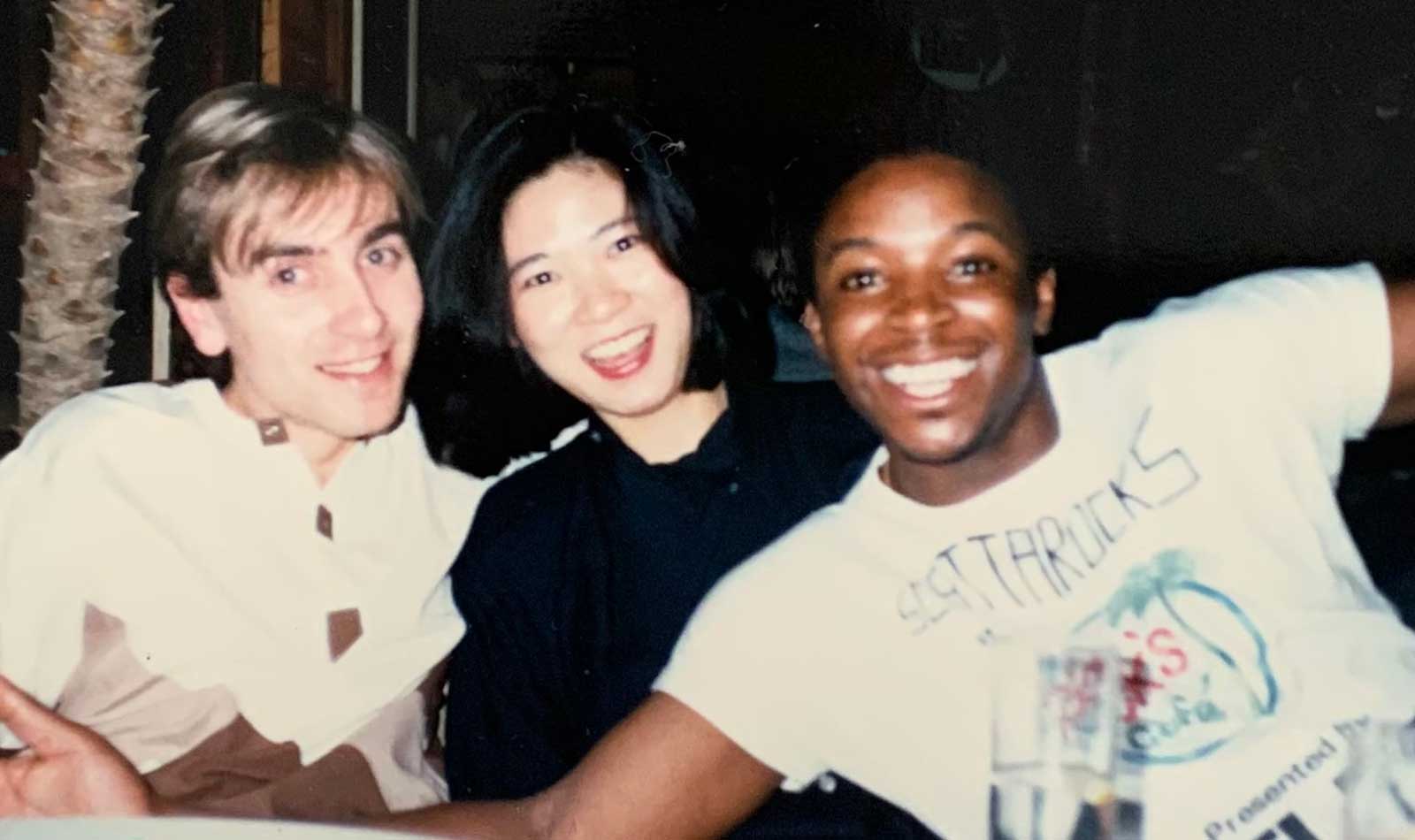 With fans in their homes 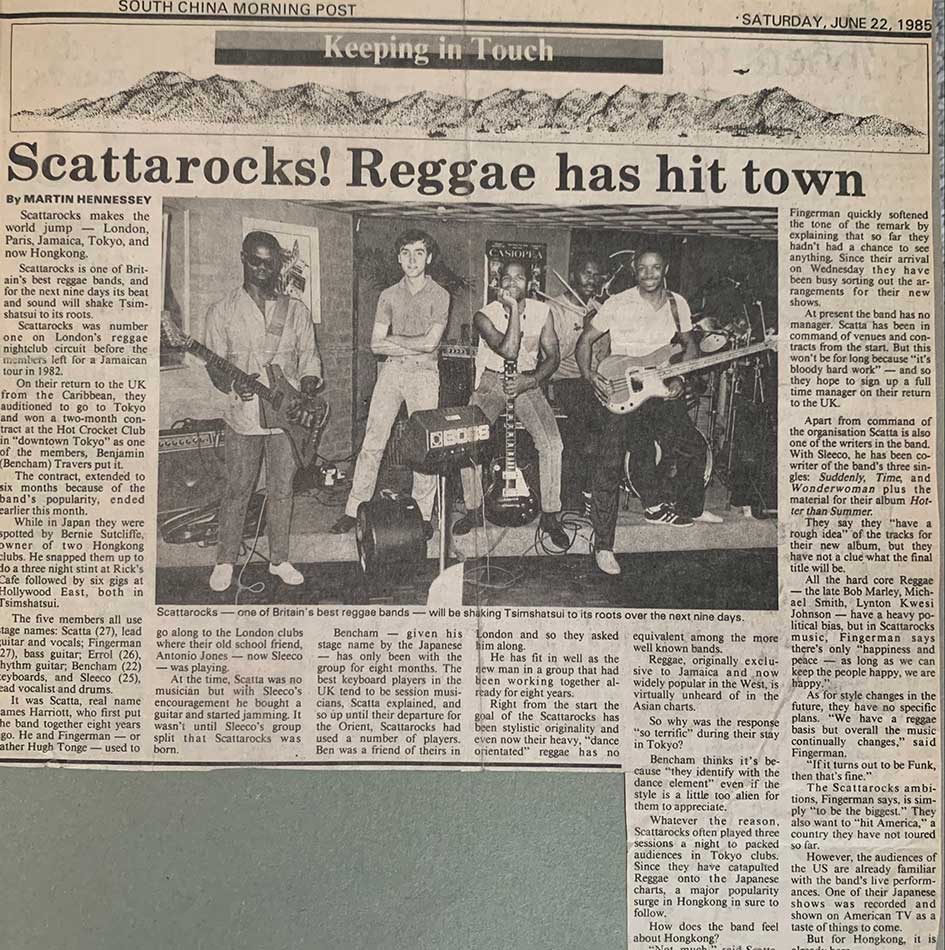 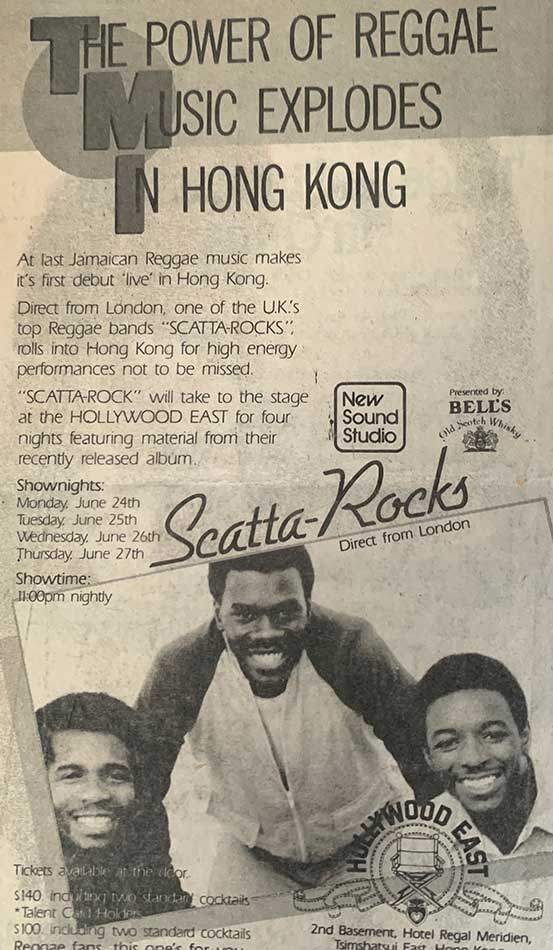 It wasn’t only the streets that were teeming with life. The clubs of Hong Kong were jumping to the Scattarocks sound. Western and Chinese audiences alike were switching on to the band’s infectious music, risqué asides and audience participation which were our trademark. Although Scattarocks could still play roots, by this time you could hear many other influences in their brand of reggae – soul, rock, funk, and folk. The band lived on what they called a “natural high”. It was sex and drugs and rock ‘n roll, (but without the drugs.) The drum and bass foundation and piano/guitar ‘riddim’ section were as tight as any you would hear in London, and creative organ shuffles and dub breaks would fill the music. Lovers Rock was of course a London invention, but the band had its own unique version of it, played at a faster tempo.

Live recordings from Hong Kong give some good examples:

And if the band needed to really step up the party vibe, it had its own unique version of calypso:

TV appearances were becoming regular. This grainy video recording of one of them features a live performance followed by an interview about spreading reggae to local Chinese audiences:

Bernie was in contact with a number of other promoters and sponsors on the Asian circuit, and the next country to pop up on the itinerary was the Philippines. A few days before we arrived President Ferdinand and 1st Lady Imelda Marcos had been overthrown in the peaceful ‘People Power’ revolution. The country was in party mode, and the timing for Scattarocks’ arrival was perfect. A lot of the early gigs were at top night spots such as Playboy Club Manila and Boom in the country’s 2nd city Cebu which only the wealthy elite could afford. As the live radio and TV broadcasts mounted up Scattarocks’ fame spread, the band pushed for some free larger open air concerts, to give the mass of poorer Filipinos a chance to enjoy the reggae vibe. These we some of the craziest audiences we had, and Scattarocks were becoming known as the party band. 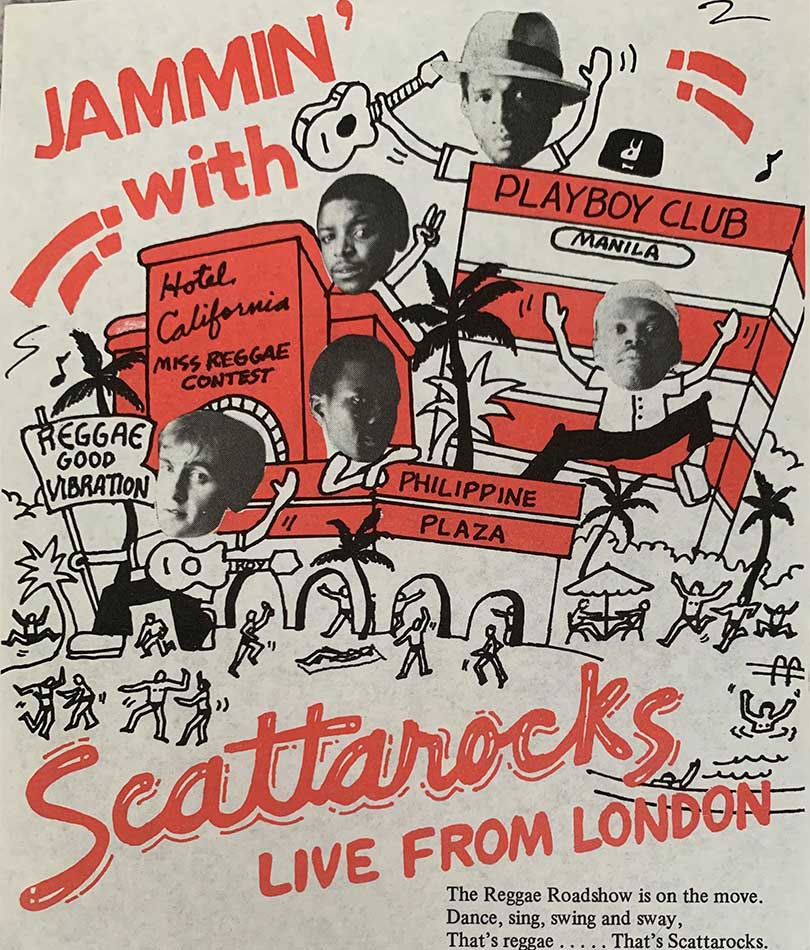 Our own jeepney! Departing official reception In stark comparison to the poverty surrounding us in Manila, we were living like kings at the 5-Star Silahis International Hotel. The ex-pats in Philippines were a much more rough-and-ready bunch than elsewhere and you had to live by your wits. It was a difficult country to do business in, and whilst the concerts and TV appearances were great, the promoters found it difficult to make this success stick in the form of recording contracts for the band. The band was glad of some well-paid work in Singapore’s top night spots to round off the final Asian adventure.

Back in London, the big break the band hoped for never quite came along. The band chose to manage itself, which was fine for securing top live work but more difficult when it came to the fickle business of securing a record contract. Under their influence I had improved massively as a keyboard player, and continued to work semi-professionally with them and other bands until I finally left for a ‘proper job’ in 1991. But Scattarocks are still going strong today, recording and performing live. Today there are strong reggae scenes in Japan, the Philippines and Thailand, and we like to think we played our part in making that happen and introducing London Dub to the wider world. Dive into our photography collections in search of the dub reggae icons of London. How can the punk scene confront issues of racism?