An August 2017 display at the Museum of London looked at the some of the ways London’s children have imaginatively played in their streets in the past. Natasha Fenner looks deeper into the museum’s oral history and historical photograph collections to discuss the important role ‘the street’ has played in the daily lives of London’s children. 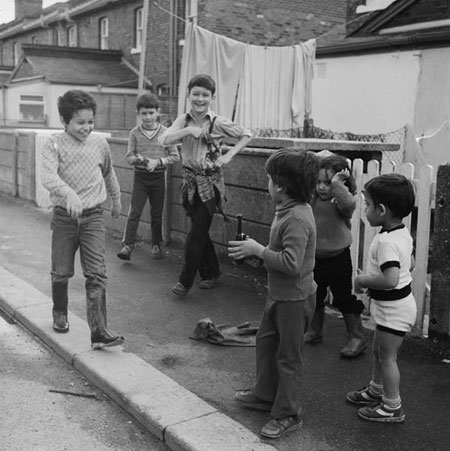 When reflecting back on childhood experiences in London, oral history interviewees often say that the street outside their home was their playground. Bernard Wills (born 1948) grew up in Brixton Hill. He recalls having ‘a normal childhood for the time. We played in the street. There were lots of kids in the road where I lived and we used to be up and down playing all sorts of games.’

Before Londoners’ lifestyles became more mobile, children’s lives were centred on their local community. With cramped living conditions and a lack of inner city playgrounds, the street offered an open urban space in which to play.

Hanging out on street corners

An important part of street life was being part of a group. Betty Phillips (born 1923) had a ‘really good gang of kids’ she played with in the streets of St John’s Wood in the 1930s. She explained that ‘we might have had a tumble or two but I can never remember any rows or fights.’

Part of the joy of street play was that it wasn’t scheduled or organised by adults; children were free to choose what they wanted to do. Boys and girls would mix together and different games would come and go in seasons. Betty recalls ‘I still puzzle how the heck we managed to do it, but there were seasons for games, nobody put a notice up, nobody said ‘today we play marbles, tomorrow we play diabolo, tomorrow we play whip and top’, it just automatically followed.’

The rules of the game 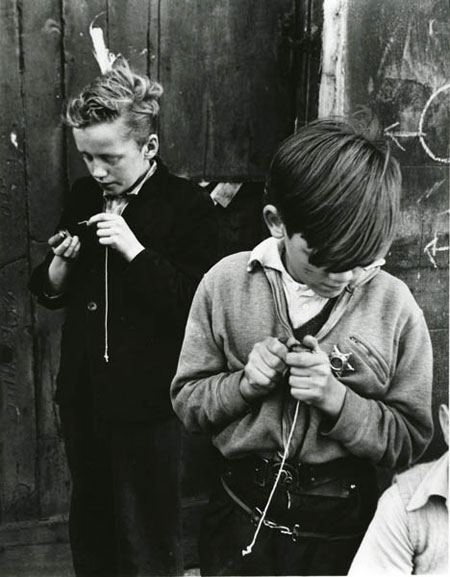 In the early 1900s author Norman Douglas asked children playing on London’s streets to write down the play-rules of their games. The result was London Street Games (1916), which lists 950 different games, verses and songs. It's a tribute to the imagination of London’s children who made up so many ways to entertain themselves with very few resources.

Some children had toys such as skipping ropes, marbles, bats and balls. However, many had to invent games with whatever items were to hand. Cherry pips, caps, boots, buttons, stones and lengths of rope were all temporarily turned into playthings and then later discarded or returned to their original use. In London Street Games, Douglas lists 30 different games that could be played with a boy’s cap alone! 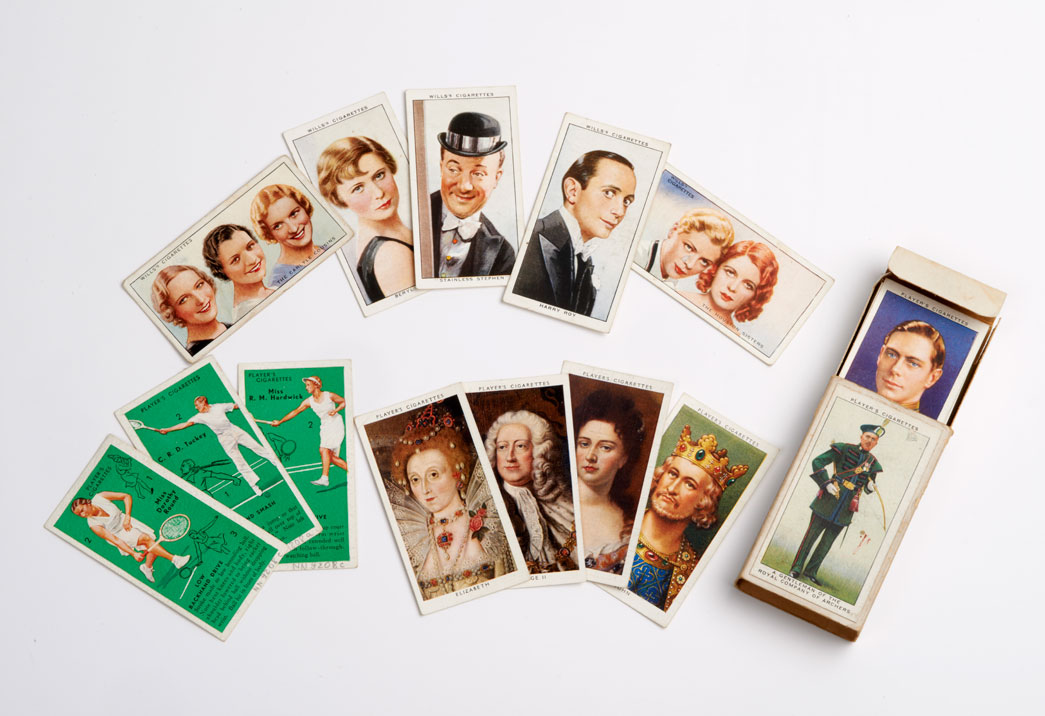 A selection of 1930s cigarette cards 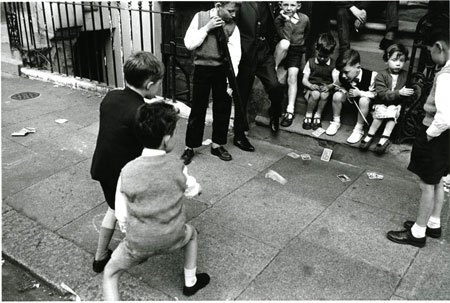 Children playing ‘flick cards’ in a street in North Kensington

Children love to collect things, swap things and play games to win things from other children’s collections. It didn’t take long after cigarette cards were first produced in 1887 for children to realise that they were a collectible commodity. Children would ask adults for the cards from their cigarette packets.

Frank Hughes (born 1902) remembers playing flick cards with friends in Wimbledon in 1913. The game involved ‘Flipping [cards] up against a wall and the nearest one would win the cigarette cards.’ Norman Douglas collected the rules to over 30 games played with these cards. He explains boys in particular were


"…so keen on these picture-games that you can see them playing at half-past six in the morning and after nine at night; and in the rain too; and when they have no fag-pictures they try to play the same games with bus tickets and then, if you’re not very careful, you can hear some shocking bad swear-word which they pick up I can’t think where, because bus tickets bend too easily and won’t fly as they should."

Cigarette cards reached their peak of popularity in the 1930s. However, in 1939 paper shortages halted their widespread production. After the Second World War, tea cards took over and in the 1990 trading card games, like Pokémon, were introduced and remain hugely popular with children today.

They see me rolling 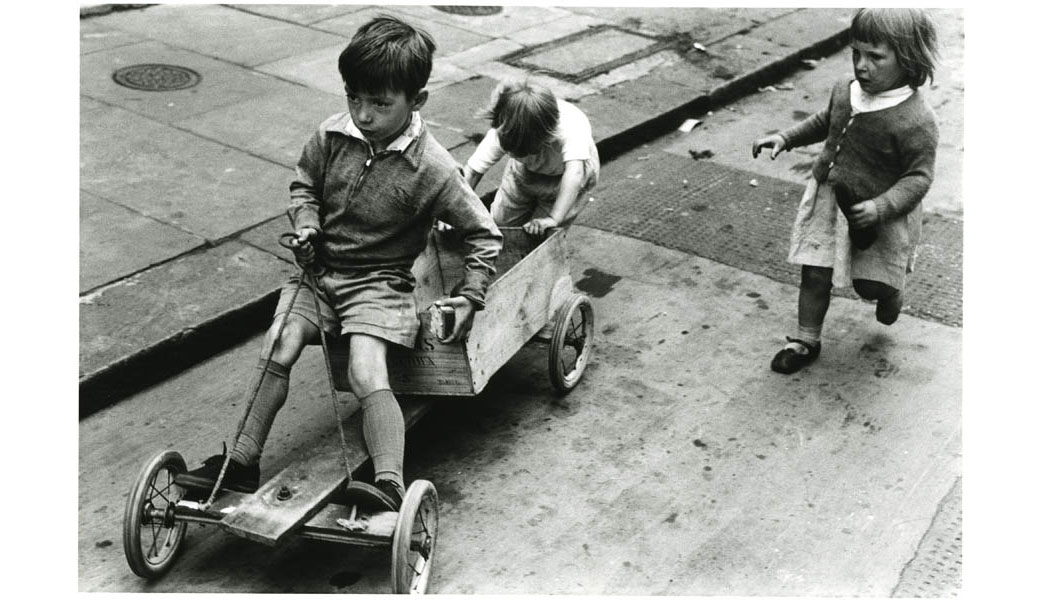 Children playing with a home-made go-cart in a street in North Kensington, 1961 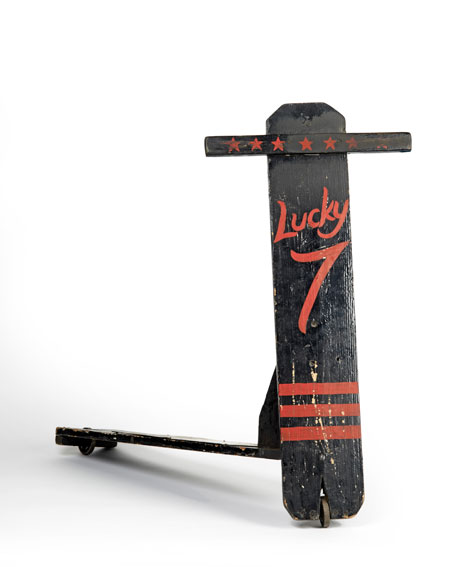 Made in a school, this provides an idea of the designs used by children to create homemade vehicles. ID no. 90.155/15

With many families unable to afford commercially manufactured toys, children would make their own. In the 1930s many London children constructed their own wooden scooters and go-carts. Unfortunately, such items rarely survive to be acquired into museum collections.

John Chaplin (born 1923), played on the streets of Lambeth in the 1930s and remembers everyone would make scooters. He would search the streets with his friends for scrap wood and ask at garages for old ball bearings that would be used as wheels. John recalls ‘The noise from these scooters going across the pavement…there was a right dreadful row from these things.’

Children would spend time refining the design of their scooters. John collected half-inch wide baling straps from a local warehouse yard to strap around the wooden block attached to the scooter base. He found this addition stopped it from splitting and was hailed by his friends for improving the strength and durability of their scooters.

Where have all the children gone? 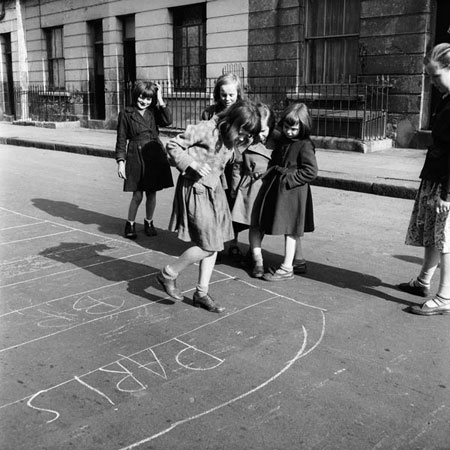 Today, 80 percent of public space in London is made up of streets yet little of it is accessible to the city’s more than 1.6 million children. The rise of the motor car combined with safety concerns, an increasingly mobile lifestyle and complaints about anti-social behaviour from neighbours have contributed to the disappearance of children from London’s streetscape.

The charity London Play has been working to bring children back out into London’s streets. They support residents to set up regular street play sessions in their street through the local council supported Play Street scheme. Currently, 22 out of the 32 London Borough councils have simplified the process involved for residents to apply for a free Temporary Play Street Order that allows them to close off their street for regular play sessions. Watch the film to see a Play Street in operation.

Children past and present share the same natural inclination and need to play freely outdoors. It is how they learn about and orient themselves in the world. Feedback from children being able to play in the street close to home has been incredibly positive. One ten year old said: ‘Do we have to finish at six? I want to do this forever.' Check out www.londonplay.org.uk to learn about setting up your own Play Street.

Watch Tunnel: The Archaeology of Crossrail

Watch a video to delve into Tunnel, our free exhibition on the archaeological wonders of Crossrail.