A full transcript of the first episode of our London Lives podcast series. This episode is inspired by tea! Not only is tea the most popular beverage for Britons, but it played a huge part in the history of the London docklands. 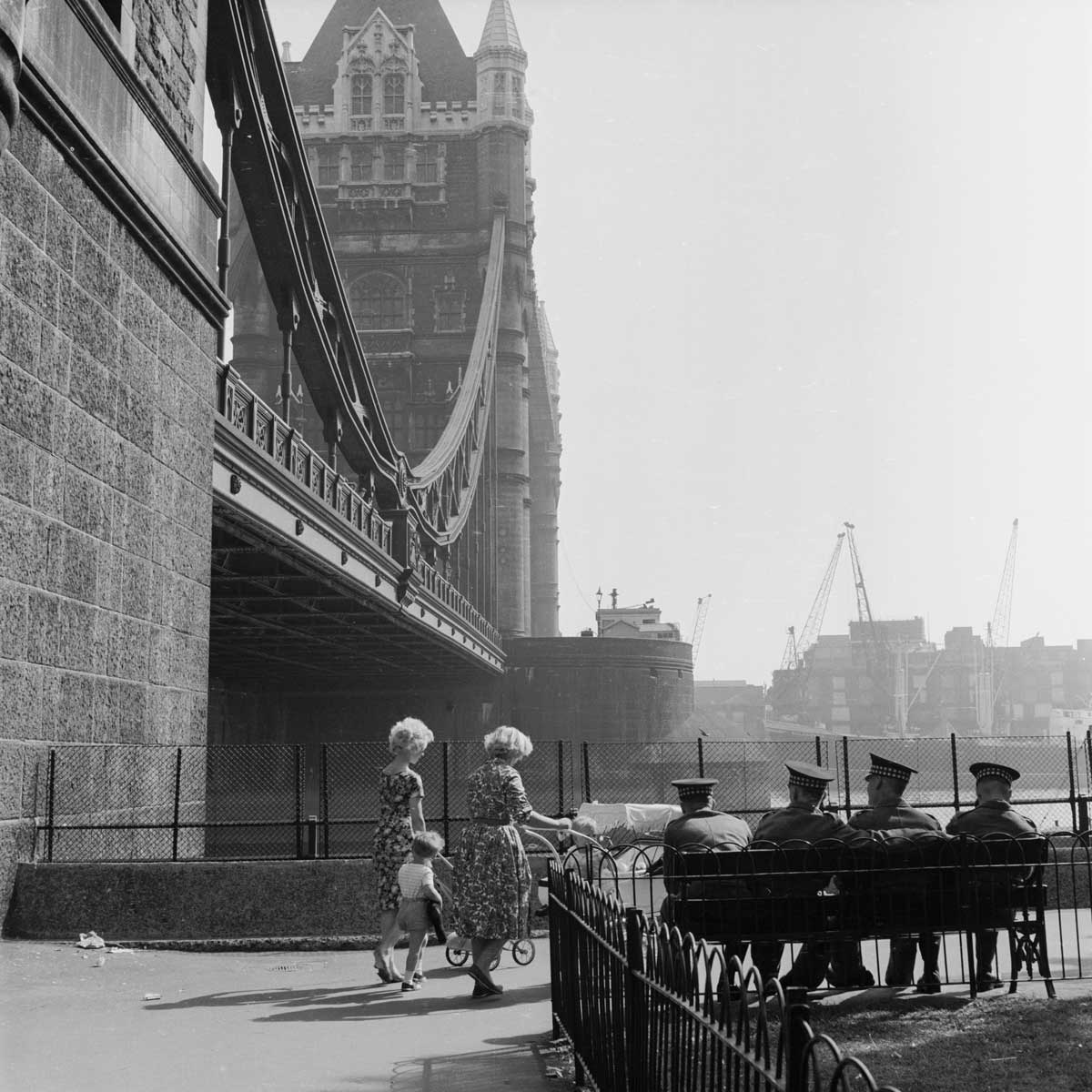 A walk alongside the Thames by Tower Bridge: 1960

My name is Luke and welcome to the first podcast of the Memories of London project with the Museum of London. What you’re about to hear is like a short radio programme – a story inspired by the exhibits and objects from the museum. Using music and storytelling, let your imagination go wild and come with me back in time. The voices that you’re about to hear are those of people who are either related, or were dockers themselves. Voices that come directly from the oral history of London’s dockworkers. It is the fascinating history of the people who worked on the docks of London from the 1930s, up until the closing of the docks from the 1970s. Are you ready? Here we go…

Near where I grew up –yes it was just a typical East London area . Where I grew up everybody knew everybody and the actual street where I first lived, all my family lived there. And in fact the street I lived in, we had 16 cousins lived in the same street.

It was like a village ‘cause everybody knew each other. There was local schools, local shops and you knew your neighbours and your friends families. So it was like a little village in the middle of London.

We lived in a community where everybody was very poor, basically, and so the only way families survived was by supporting each other.

M’ dad was a stevedore and as I followed him later. My mum did various jobs on the [Isle of Dogs] from working in sweet factories, paper mills, canteens.

I remember the big, large walls around the dock, so we never saw inside the Docks. All I remember is the men lining up for work outside and then going through the gates, and that was it until they came home from work. So the docks was a bit of a mystery as I was growing up.

Cinnamon, myrrh and mace you show

More cigars than a man could count

And a billion cloves in an odorous amount.

And a choice port wine from a bright glass [found]

The wealth of the world and London’s power!

[sounds of voices on London’s docks]

My name is Billy, and I am a London docker. I have heard so many stories while working on the docks. The story of how Bonnie once lied to the ocean… the story of the beauty siren called Marguerite. But, the one that I remember best, and the one that always makes my bones tickle with laughter when I hear it again, is the legend of the first cup of tea in England. Have you ever heard it? No? Are you sure? Well, in that case, gather close my friends. Come one and come all – hear the legends that haunts the land and sea. Not of kings or warriors, but of a simple cup of tea. Not peppermint or green tea, not fennel tea or camomile, not ginger tea or chai tea, but the very first cup of tea on the British Isle.

[Piano music plays in the background]

Many years ago, before the time that any of us could possibly remember, the British people discovered tea. It was through Queen Catherine of Briganza, from Portugal. In 1662, she married the English King, Charles II, and became Queen of England, Scotland and Ireland. Along with her many treasures and dowry, when she came to the UK, she ordered crates and crates of loose-leaf tea, to be brought in from Portugal. Tons and tons of it! Of course, to impress all her subjects she asked a very special merchant to take care of transporting the tea for her. His name was Thomas Garway. The man was entrusted with bringing tea into the United Kingdom!

You showed, you showed me,

The wealth of the world and London’s power.

Imagine the docks, during the 17th century. Imagine all the big ships and dockers and merchants all shouting on top of each other. There, Thomas Garway waited for his casket of tea very patiently. He had to himself deliver it to the Queen. He had always dreamed of being the first person in the country to bring tea, but, more importantly, he had the secret wish to be the first person to drink tea – the magical beverage which is supposed to solve all your problems when you drink it – Tea.

My Garway! One of the dockers shouted. He moved forward, signed the paperwork, boarded the crate inside his carriage and rode as fast as he could back to his house.

His wife, Mrs Garway, and his five children, were all waiting eagerly in their kitchen. Today was the day that the tea would be arriving. He opened the front door and came rushing in with a box of tea in his hands. The Queen had ordered plenty of tea to be brought in, so Thomas was sure that she wouldn’t mind if his family had a bit of a taste. So, he brought the tea home, unpacked it from its box and put it on the table. Mr Garway’s family would be the first ones ever, ever, to have proper tea in the UK! My Garway had long studied how this substance – these little leaves – would create the most delicious and aromatic beverage when mixed with hot water. This tea would be brewed and create what people will soon come to call a cup of tea.

Just me for you

And you for me

And two for tea

Just me and you

And you for me

The Garway family had waited for this moment for so long. The water was already heated up, the special kettle that was made from tin, was prepared. Cups were sorted out. The tea leaves that were brewed in the hot water and the aroma of tea filled their house. Mr Garway was ready to serve the tea. He grabbed the teapot and was about to start pouring when suddenly he was interrupted.

‘Is there a problem?’

‘Yes, dear’, she said. ‘You see, the proper way that tea should be made is by pouring the milk first.’

Mr Garway smiled, almost feeling confused. He was one of the most travelled and knowledgeable merchants in London. There was no way that he’d missed out on such a crucial detail.

‘I’m sorry, my dear’ he said. ‘But you’ll find that the tea should go first’

‘No, the tea!’ he said. ‘By putting the tea in first and stirring as one pours, one can get exactly regulate the amount of milk. Whereas one is liable to put in too much milk if one does it the other way around.’

The Garway children looked so confused. Mrs Garway was beginning to grow purple in the face.

‘If milk is poured into hot tea’ she said, ‘individual drops separate from the bulk of the milk and come into contact with the high temperature of the tea for enough time for significant degradation to occur!’

The whole room stopped to watch. Noone even blinked. There they were in the presence of the first cup of tea, fighting over which goes in first – the milk or the tea. Legend goes that Mr and Mrs Garway fought about it all day and all night. The moment one of them would find a solution, the other would immediately contradict. The legend follows, that the country was cursed forever more from that very moment. That no family would ever agree with one another on the argument of milk and tea. Half the country would say milk first, the others would say tea first. Moreover, should a tea person, be given a milk-first tea, they are bound to be seriously offended!

No tea for you

No tea for me

It was tea for fun

Now tea for none

Just me and you

And no more tea

But I still love you

And that, my friend, is today’s episode. How do you take your tea? Tea first or milk first? I’ll give you a second to think about it. I bet that if there is more than one person in your room right now, even between you you might even disagree. But, the point of our story today is not to see you disagree or argue, but to appreciate that from the beginning of time – from the very first cup of tea – several opinions were present. I don’t know if there’s anybody who would agree that maybe the sugar should go in first. Or maybe a biscuit! I don’t know. If someone had to ask ‘which one was the original – was it milk first, or tea first?’, you could answer them this: The only thing we know for certain is that the first cup of tea in England was served cold!

That was our podcast for today. Thank you so much for joining us and for listening. We should now mention and thank everybody whose words or music featured in this podcast. To Doris Day and her song ‘Tea for Two’, to John Masefield’s and his 1914 poem, ‘’The Wealth of the World’, and to digital:works for use of voices in their film, On the Docks.

From all of us at the Museum of London, we hope that you enjoy this radio show. While we promise that many more are to follow, we invite you to get in touch with us. We are telling stories right here, so how about we tell your stories as well. Are there any memories or thoughts or experiences that you would like us to speak about, or sing about, in these podcasts. Get in touch with us and I’m sure that we can include them. We look forward to being with you again. Until then, take care, and goodbye.