Curator Beverley Cook explains how the museum acquired its incredible Suffragette collection and how it continues to inspire today.

Our summer 2018 display, Keeping Alive the Suffragette Spirit, displayed original artefacts from the Votes for Women campaign alongside modern objects from the artists and designers they've inspired. It's a powerful testament to how the struggle for Votes for Women, which first succeeded in Britain 100 years ago, continues to influence people today. We've also displayed some objects never before seen by the public, including Suffragette-made scrapbooks giving a first-person perspective on the struggle. But why does the Museum of London have such an incredible collection relating to the Suffragettes? 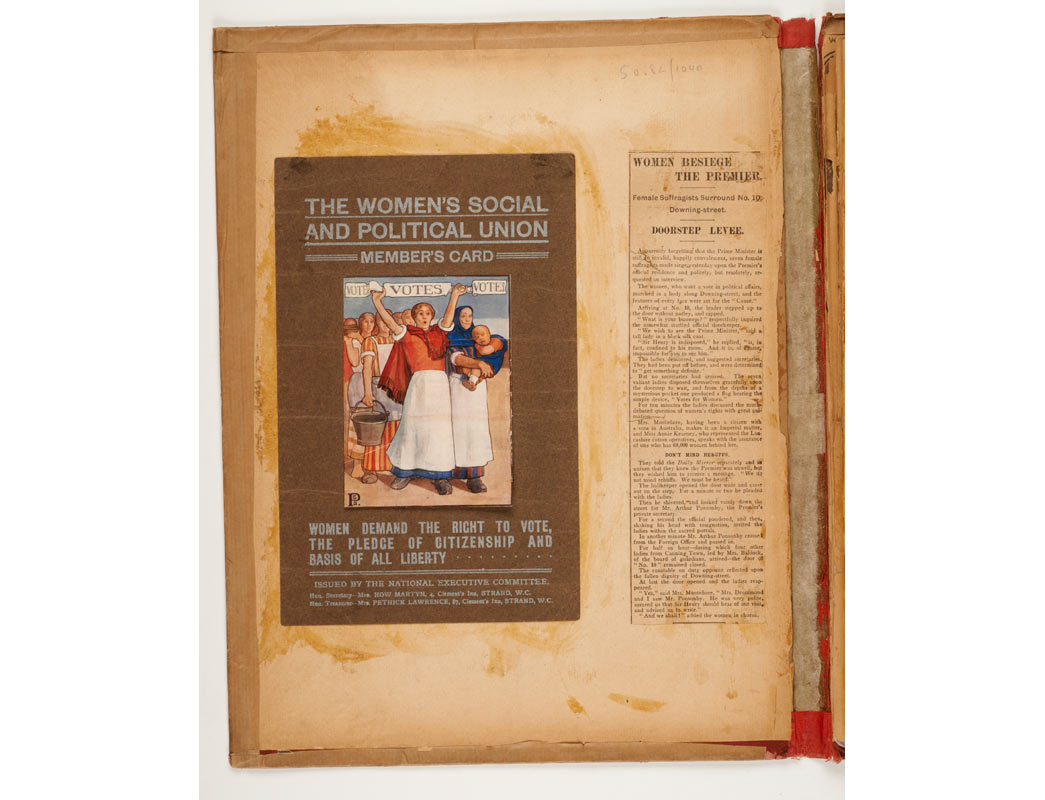 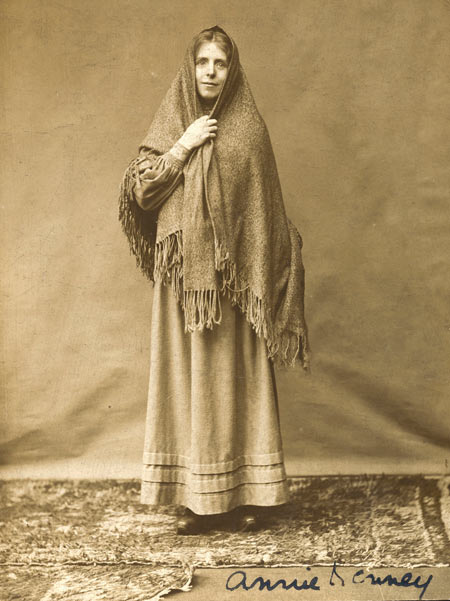 One of the key members of the Suffragette Fellowship, who helped donate their collection to the Museum of London

In 1950 the Museum of London acquired a truly exceptional collection of archives, visual material and mementoes relating to the militant Votes for Women campaign. Gifted by the Suffragette Fellowship, the collection provides a unique insight into the lives of Suffragettes and, in particular, those who served terms of imprisonment for the cause. Behind every object or photograph is an individual and highly personal story of courage and commitment.

The Suffragette Fellowship was formed in 1926 by former members of the Women’s Social and Political Union and Women’s Freedom League ‘to perpetuate the memory of the pioneers and outstanding events connected with women’s emancipation and especially with the militant suffrage campaign’. The members of the Fellowship became the first curators of suffrage history, memorialising their militant campaign by collecting and preserving both the memories and possessions of former Suffragette prisoners.

Alongside the collection, the Museum of London also inherited the immense responsibility of the Fellowship’s founding aim of ‘keeping alive the Suffragette spirit’. Since 1951 the Museum has always displayed a small number of items from the Fellowship’s collection in its permanent galleries. This has primarily consisted of the most visually appealing objects, including banners, sashes and rosettes in the Suffragette colours of purple, white and green. We’ve also displayed striking items relating to militant action: prison medals and weapons such as a hammer and cosh used in window-breaking. 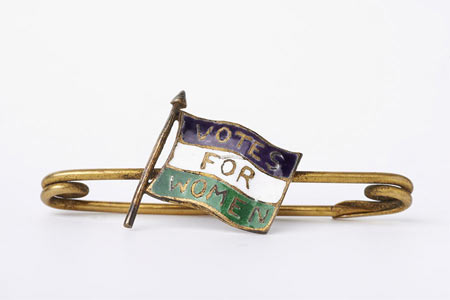 Over 1,300 women served terms of imprisonment for militancy but many thousands supported the principle of direct action without risking arrest. Behind every militant act was the highly sophisticated suffrage campaign, which relied on an army of fundraisers, volunteers and organisers. The focus of the Fellowship on arrest and imprisonment resulted in the under-representation of these ‘foot soldiers’. This version of the campaign has, at times, been difficult for the Museum to challenge.

In recent years attempts have been made to correct this imbalance by collecting material relating to those Suffragettes who, although never imprisoned, were equally significant to the cause but whose contribution has been forgotten. In 2015, for example, the museum acquired a small collection of fashion accessories and merchandise in the purple, white and green colours of the WSPU previously owned by Dorothy Meihè.

Such new additions to the collections are vital to ‘keeping alive the Suffragette spirit’ by representing all shades of militant action. The new objects we're displaying also show how the Votes for Women struggle continues to resonate today: like this dress from the New York based fashion collective Vaquera. It's inspired both by a Suffragette dress, and by the TV adaptation of Margaret Atwood's 1985 novel The Handmaid's Tale. 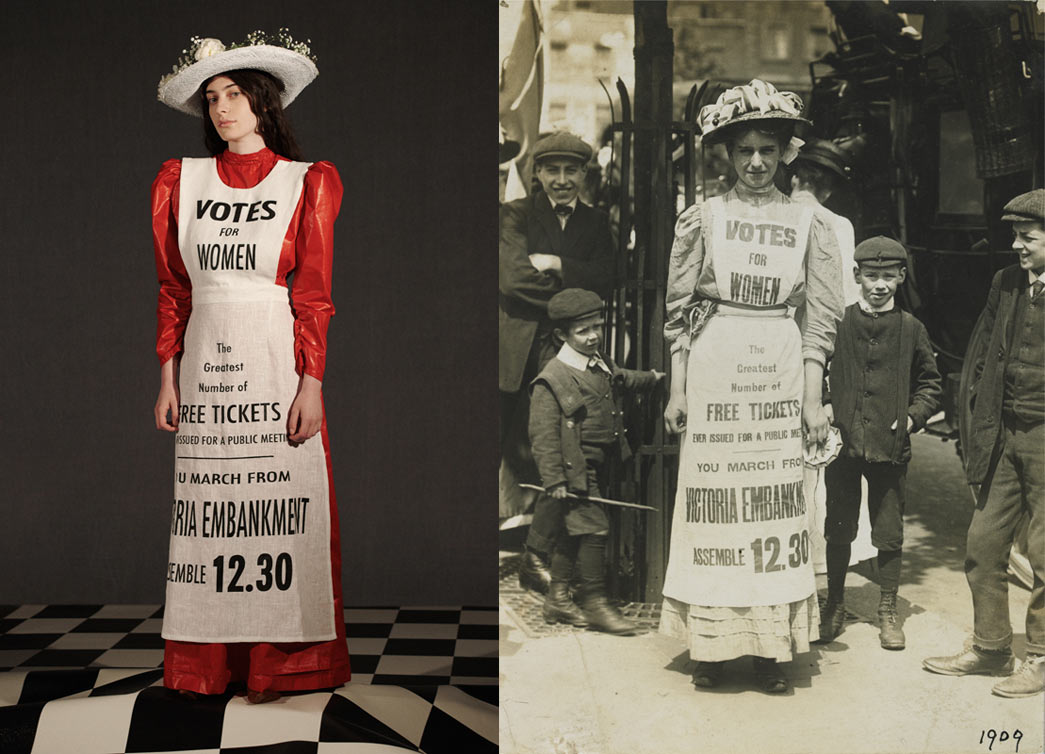 Suffragette Vera Wentworth in 1909, and the dress by Vaquera that it inspired

This fashion collection was sponsored by Hulu, the production company behind a TV adaptation of Margaret Atwood’s 1985 novel The Handmaid’s Tale released from April 2017. 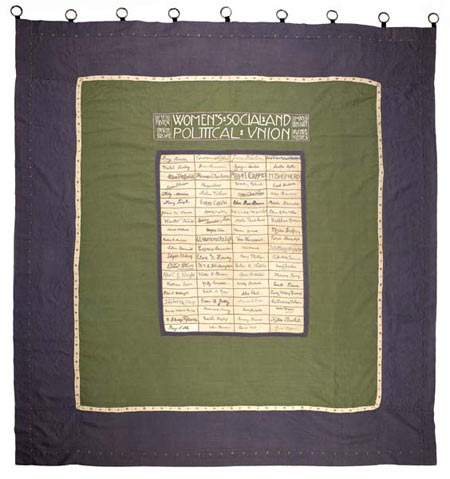 The most shocking and memorable images and objects in the collection are those relating to the hunger strike and force-feeding of Suffragette prisoners. Whilst these can be emotively powerful to display, rather disturbingly they also represent women as victims of the male-dominated society in which they lived. Such displays need to be balanced by equally powerful representations of Suffragettes as the strong, self-confident women who worked together to bring about change.

The current permanent Suffragette display at the Museum of London includes one of the most emotively powerful objects in the entire collection: the Holloway Prisoners’ banner. First carried in the From Prison to Citizenship procession in June 1910 the banner is composed of eighty pieces of linen embroidered with the signatures of eighty hunger strikers who, by 1910, had 'faced death without flinching'. Designed by the Scottish embroiderer Ann Macbeth, the banner symbolises not only the sacrifice of the hunger strike but the spirit of comradeship that gave Suffragettes such enduring courage and strength.

Squares from the Holloway Quilt, on display in Suffragette Spirit 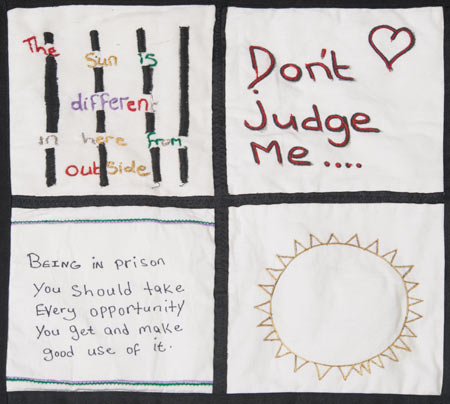 Provoking emotion within a museum setting is hugely challenging but, when effective, can create a strong impression. In 2012 three educators working in the modern Holloway prison visited the museum. Standing before the WSPU Holloway prisoners’ banner they were so inspired by its story that they returned to Holloway determined to create their own prisoners’ quilt.

During a series of workshops held in each prison wing over several weeks, prisoners were each given a square of cotton and asked to express through embroidery, ink and paint their thoughts and hopes for 2012, the year when the ‘freed’ nation came together to celebrate the London Olympic Games and Queen’s Diamond Jubilee. Women on the Lifers’ Unit spent hours in their rooms embroidering the words of other women. In other workshops women chose totemic words for the quilt border representing what they hoped to find on release: 'cake', 'love', 'respect', freedom', 'family', 'sex' and 'money'. 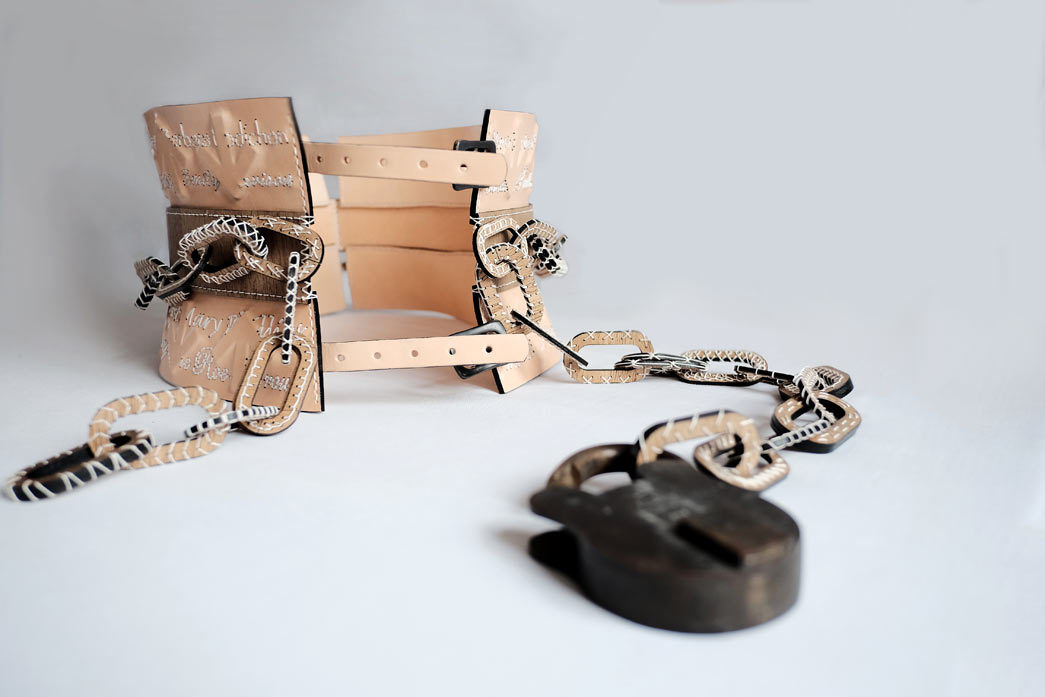 Artwork from The Power of Her by Francesca Smith

One of six fashion-based works inspired by historical and political feminist movements.

Besides the quilt in our Suffragette Spirit display is a body belt embroidered with Suffragette names. This was designed by Francesca Smith, and inspired by the body belts used by Suffragettes to chain themselves to railings.

The museum’s responsibility for ‘keeping alive the Suffragette spirit’ is not just about representing the struggles of the past but also about looking forwards. It is about understanding the contemporary relevance of the militant Suffragette campaign and the emotional power of its visual and material legacy, which continues to inspire, shock and divide opinion. I believe the Fellowship would have been incredibly proud of the creation of contemporary works directly influenced by the museum’s Suffragette collection, such as the quilt. For, as Annie Kenney wrote in the Suffragette Fellowship newsletter Calling All Women in 1952:

‘May the younger generation find in this Museum the inspiration and will to dedicate their lives anew to high and noble deeds.’

Keeping Alive the Suffragette Spirit at the Museum of London closed in August 2018. 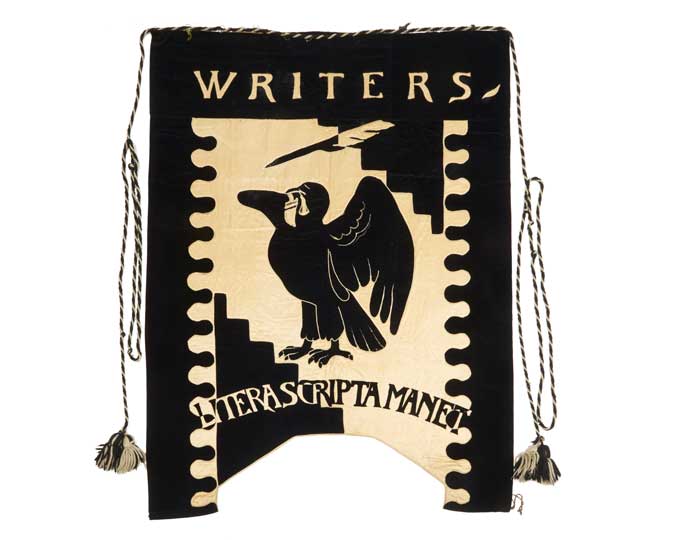