Pomegranate and rose: Henry VIII and Katherine of Aragon

In a case in the Medieval London gallery at the Museum of London lies a small pewter badge depicting a Tudor rose combined with a pomegranate. These were the heraldic devices of Henry VIII and his first queen, Katherine of Aragon. Objects from our collection have surprising reflections of this fateful marriage. 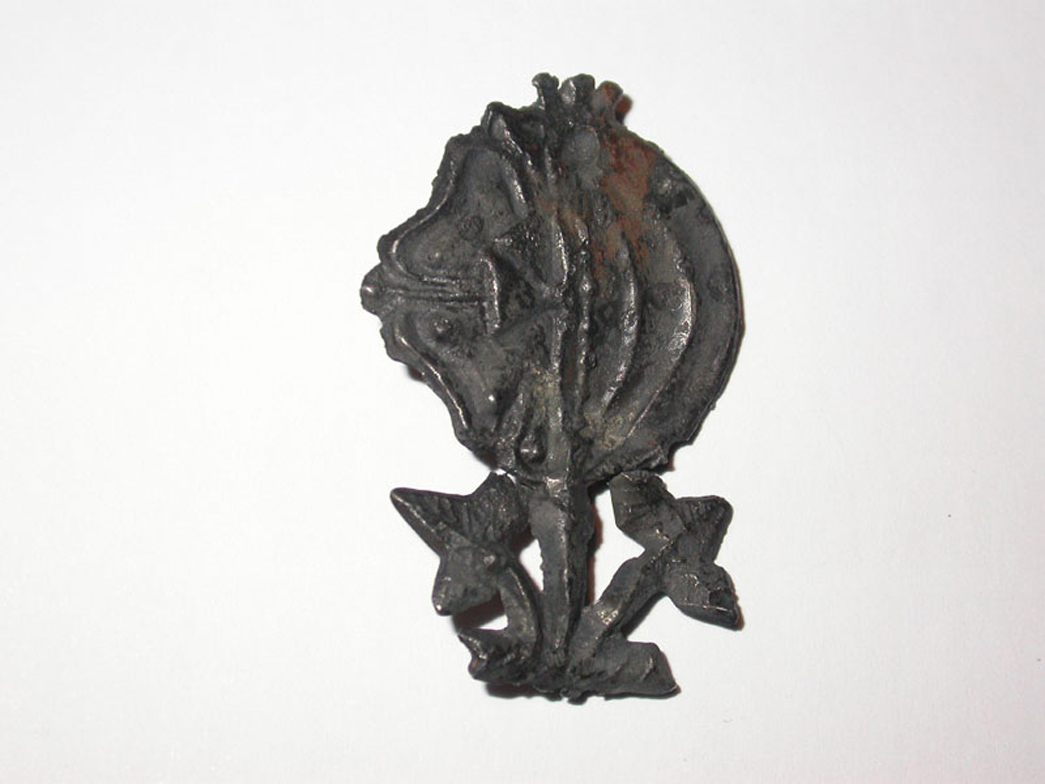 The Tudor rose (left) blends into the pomegranate of Aragon. 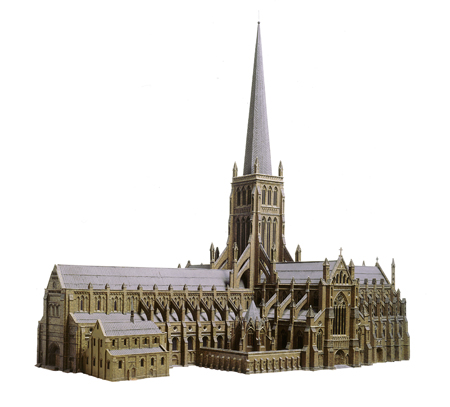 Katherine of Aragon led a rather tragic life. The daughter of King Ferdinand and Queen Isabella of Spain, she was born into privilege and was betrothed at the age of three to Arthur, the heir of Henry VII, who was a year younger. At fifteen she made an arduous sea voyage to England to marry Arthur; she was never to return to her homeland. On 14 November 1501 amidst much splendour they were married at St Paul’s Cathedral, a model of which can be seen in the Medieval London gallery.

They moved to Ludlow Castle where less than five months later Arthur died and Katherine entered a period of limbo. In order to secure the remainder of her dowry, Henry VII sought to marry her to his second son, Henry, Duke of York, who was now his heir. Henry, who was six years younger than Katherine was clearly attracted to her. But the marriage was no simple achievement as it depended on a papal dispensation. Katherine swore that her marriage to Arthur had never been consummated and that she was therefore free to marry her dead husband’s brother, which was forbidden under canon law. For over six years she waited, often finding herself and her household in a state of dire financial need, as her father and father-in-law wrangled over the dowry payment and the legality of her marriage to Arthur. In April 1509 Henry VII died and Henry VIII became king. 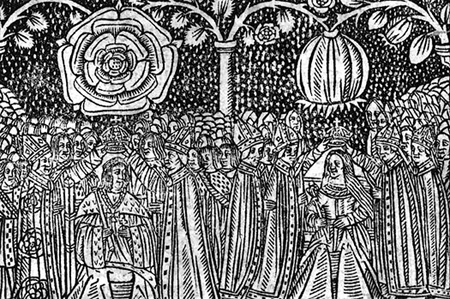 The pope granted the dispensation, annulling Katherine and Arthur’s marriage. Henry and Katherine were swiftly married in a private ceremony at Greenwich and were crowned together at a joint coronation in Westminster Abbey in June. A woodcut shows them enthroned, sitting under their respective heraldic motifs – the Tudor rose and the pomegranate of Aragon.

The pomegranate is an ancient symbol for fertility and regeneration and in the Christian church is a sign of Christ’s resurrection. It would have been seen as a very apt symbol for Katherine and the promise of heirs that her marriage brought. The badge, showing the Tudor rose and the pomegranate of Aragon dimidiated (combined so that only half of each is visible), probably either dates to the time of Katherine’s marriage to Arthur or to her subsequent marriage to Henry. Such badges would have been worn by loyal subjects who wanted to show their love for their king and queen.

Katherine and Henry’s early married life seems to have been very happy. They were clearly in love – both were attractive and well-educated with shared interests in the arts, humanities and politics. And both were popular with their subjects. In 1516 their daughter Mary was born, but their hopes for a male heir were not to be fulfilled: Katherine suffered at least two miscarriages and bore three children who died in infancy, including a son, Henry, Prince of Cornwall, who lived for just under two months. For Katherine, her device of a pomegranate, such a clear symbol of fertility, must have been heart-breaking. 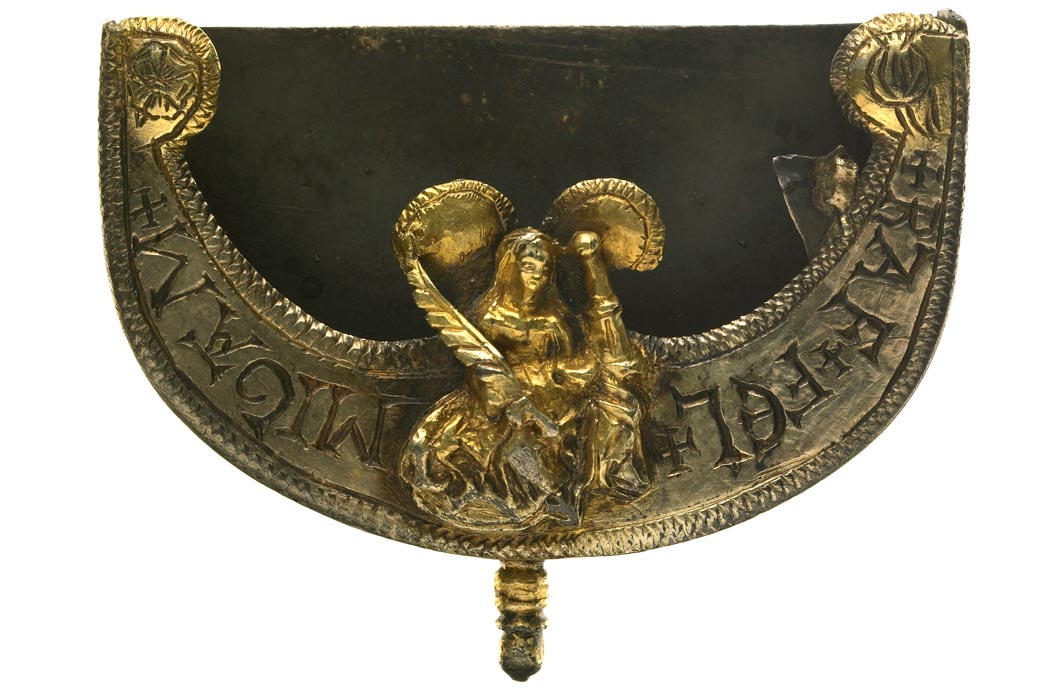 In the same display case as the livery badge in the Medieval London gallery, there is another little remembrance of Katherine’s involvement with the Tudors. This object is a silver-gilt belt chape – a curved metal strip or edging that protected the end of a leather belt.

The chape bears a small central figure of Saint Barbara, which is relief moulded, and at either end, an engraved rose and a pomegranate. Along the chape are the engraved letters: RAF+FEL+MIGAM. This is an abbreviation of the name Ralph Felmingham, who was one of the Sergeants-at-arms of Henry VIII. A Sergeant-at-arms was a royal appointment; the role was similar to that of a royal body guard. Felmingham was responsible for summoning a jury of peers for at least two famous trials of the time and he was also present at both: the trial of William, Lord Dacre in 1534, and that of the Queen, Anne Boleyn and her brother Lord Rocheford in 1536.

The belt chape is a fabulous little reminder of a very uncertain time. Not only does it bear the motifs of Henry VIII and his first wife Katherine of Aragon, but also the figure of Saint Barbara, patron saint of artillerymen and engineers (amongst others). Barbara is shown with her symbols of a tower and a palm branch.

This little chape, therefore, shows the wearer’s loyalty both to their king and queen, and to their religion. But of course by the 1530s all of this was changing. In 1527 Henry petitioned the Pope for an annulment to his marriage to Katherine. By 1533 he was still waiting and finally gave up, marrying Anne Boleyn. The following year the Act of Supremacy made Henry supreme head of the Church of England and the years following this saw the dissolution of the monasteries. Such a period of uncertainty and change must have been both exciting and bewildering – depending on which side you found yourself. And this chape reflects those times. Here we have a man, Felmingham, present in court, obviously known to the king, owning or commissioning a chape with his name on it and the symbols of his religion and his then king and queen. Some years later this same man is organising the jury who will preside over Henry’s second queen’s trial and probably by this time, if indeed not some time before, the chape has been removed. It was found on the Thames foreshore in 1989, and whilst it may have ended up there through accidental loss, it is also tempting to see it being discarded – removed from the belt it was attached to and flung into the river.

It is a poignant reminder of how quickly things changed during the years of Henry’s rule and, in particular, with his marriages, how quickly people fell in and out of favour. It was interesting to see the scene in the BBC's adaptation of ‘Wolf Hall’ where the painter asks Cromwell if he should paint out Wolsey’s coat of arms on a wall. This happened many times over during Henry’s reign (and of course other monarchs) and courtiers must have to have been astute followers of the times to keep up with things. No one would want to be seen by Henry wearing a badge or emblem of Katherine when Anne was in the ascendance and once Anne had fallen out of favour a similar rush to obliterate her initials and emblems would have occurred. A few of Anne’s survive, most notably at Hampton Court Palace and decorating the fabulous rood screen in Kings College Cambridge. Meanwhile Katherine’s ‘K’s remain intertwined with Henry’s ‘H’s on his armour, which can be seen at the Tower of London.

These two small objects are a reminder of the rich history that lies behind even the most humble artefacts in our collection. 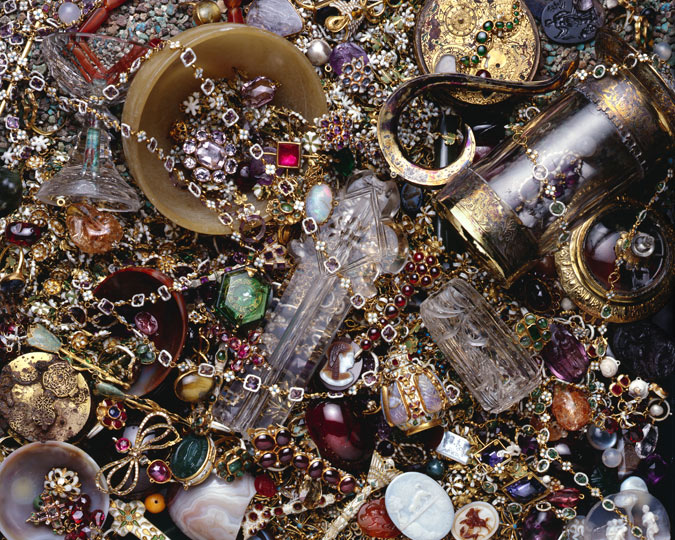 The Cheapside Hoard - Collection in Focus

Discover the Cheapside Hoard. Found by workmen in 1912, it is the greatest single collection of Elizabethan and Stuart jewellery in the world. 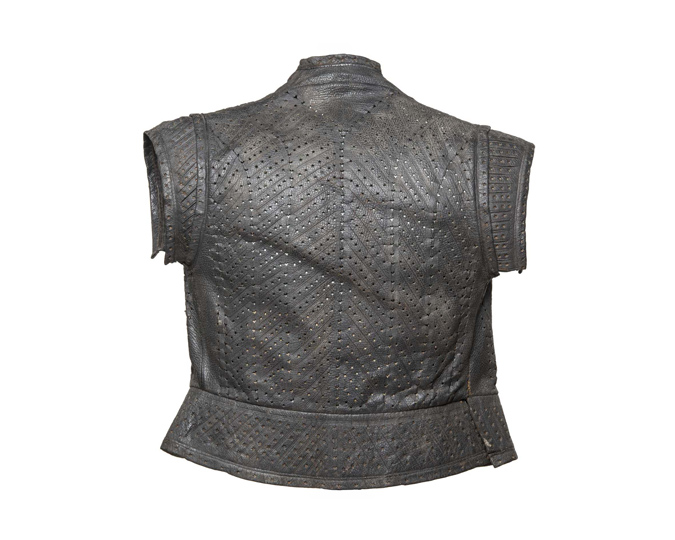 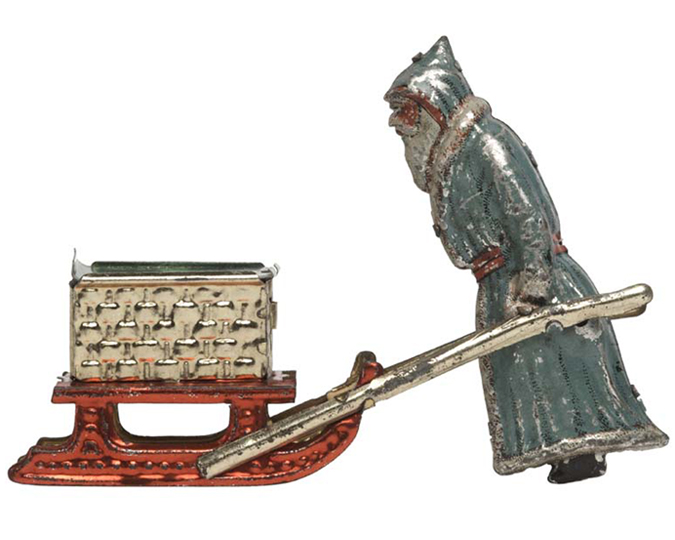 What can a set of cheap children’s toys tell us about Edwardian street life?