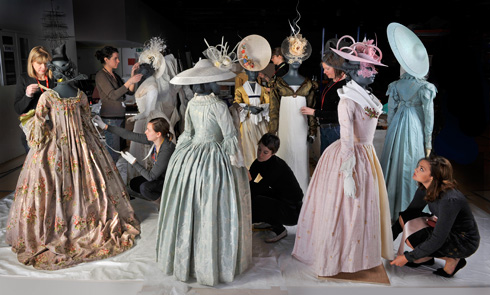 PhD candidate Olivia Croyle is carrying out research into the role played by fragmentary objects in understanding the art and visual culture of the later Middle Ages (c.1000-1500). Jointly supervised by specialists at both the Museum of London (MoL) and the University of East Anglia (UEA), the research will focus on works in the MoL’s medieval display collections and archaeological archive, which houses artefacts from over 8,500 sites investigated in London over the past century.

These collections offer an encyclopaedic reservoir of medieval material culture, however their fragmentary nature means they have often been overlooked by art historians. This research will instead present a doctoral student with the opportunity to reconsider the value of such carefully crafted yet incomplete objects to medieval art history, shining a light on the vital information they have to offer about London in the later Middle Ages.

Wearing the City: Fashion and clothing in the curation of urban history

PhD candidate Jihane Dyer is researching the use of clothing in the curation of urban history, particularly in the way that the social landscape of the capital has been interpreted and displayed by the Museum of London and its predecessor, the London Museum. The relatively recent rise of material culture approaches has led to the relationship between clothing and histories of cities being rethought.

Rather than just showing a timeline of what people once wore in a particular city, the clothes of famous inhabitants, or the designs of the best-known fashion designers, these approaches open up new possibilities, particularly for city museums. For example, the display of surviving clothing can be strongly imbued with histories of identity, particularly of gender, race, sexuality and urban subcultures. The fashions of designers can speak not just to their creative talents, but also to changing urban contexts of production, consumption and fashion performance on the streets of the city.

The project is distinctive having a research context that will allow study of this relationship in the past, but also in the development of future displays, notably in the creation of the new Museum of London at West Smithfield. The student will have a base at the Museum of London, and as well as archival work on its collections and their past display, will also have an opportunity to observe and be an active participant in the development of new displays.

A significant element of the project will also involve comparative analysis of approaches to clothing in other major city museums. Jihane is supervised by Beatrice Behlen (Museum of London) and Professor David Gilbert (Royal Holloway).

Want to learn more or work with us?