In this edition of our fashion series, we delve into female fashions of the 1930s with the help of a former Vogue fashion editor to explore what made the new decade’s silhouette so different and appealing.

Major changes in fashion rarely occur in line with the calendar but the 1930s might be an exception. Maybe the style switch was accelerated by the stock market crash of October 1929 — although relationships between world events and fashion are usually not as straightforward as they are sometimes presented. (Don’t get us started on the supposed link between hemlines and the economy!)

In her book about The Indecisive Decade (1968), Madge Garland, British Vogue’s fashion editor from 1932 to 1940, described the rather sudden replacement of one beauty ideal with another:

Few decades lend themselves to a sharper division than do the Twenties and Thirties: the image of a short-skirted, short-haired boyish girl with no breasts and no waist but exposed legs was replaced by a taller, more elongated figure in which the torso was of paramount importance but the legs of little account.

Elements of the 1930s’ style had been creeping into fashion for a few years. For most of the 1920s, it had been unthinkable to wear a long dress or skirt but by the end of the decade, hemlines had begun to make tentative forays towards the ground and often incorporated, which provided length without total commitment, or featured appendages, exemplified by the so-called handkerchief hem.

Illustrations from a 1930 catalogue printed for Hitchcock, Williams & Co. of St Paul’s Churchyard advertising new frocks for spring and summer also demonstrate this ambiguity or, as Garland has it, “indecisiveness”. While some of the 1920s trademarks were still present — waists were relatively low though hemlines were still quite high — the dresses also included features that were to dominate the new decade.

While the 1920s had been about vertical and horizontal lines, the 1930s were all about diagonals. Here in the catalogue, only visible in the jaunty angle at which one of the cloche hats is worn, asymmetry was also going to play a big part. Dressmakers and frock designers could not leave anything alone: if textiles were not patterned — stripes and checks being particular favourites — they were fan-pleated or tucked, ruched or tied into bows. 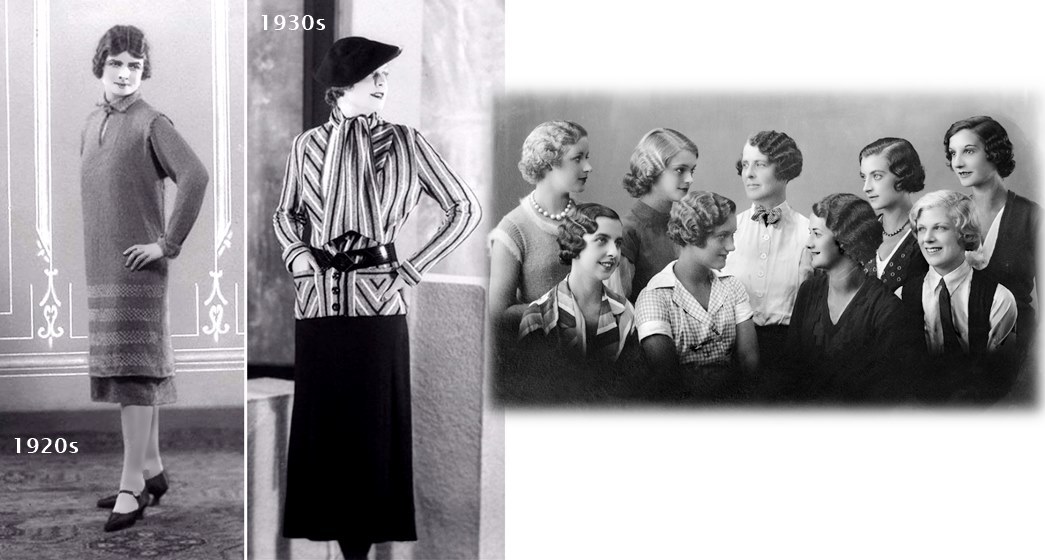 The Hitchcock catalogue hints at a new beauty ideal and stance, as personified by a model who walked in London couturier Victor Stiebel’s first collection of 1932. He recalled: “Gwen was entirely of the Thirties, with sunken cheeks, a tight-fitting helmet of shining brown hair and a flat skin the colour of oatmeal. There was insolence in the way she showed clothes, with her stomach shoved forward, her shoulders collapsed and swinging her long, boyish legs.” (Sunday Telegraph, 10 November 1963) 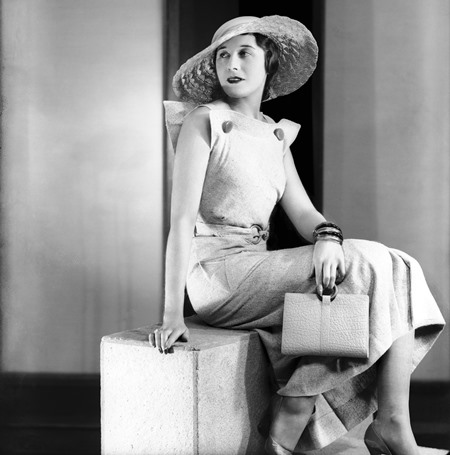 The basic elements of the female wardrobe, however, did not change. It continued to consist of dresses or suits worn with blouses or tight jumpers. Some previously abandoned garments experienced a revival, such as capes and their smaller cousins, capelets.

They had not worked with the straight silhouette of the Twenties, but were now either used as separate garments or incorporated into jackets and coats.

Hats continued to be worn, either small at gravity-defying angles or wide-brimmed in summer. Fur remained popular for trimmings or fashioned into accessories. Gloves often had large gauntlets and bags were usually but not always clutched. 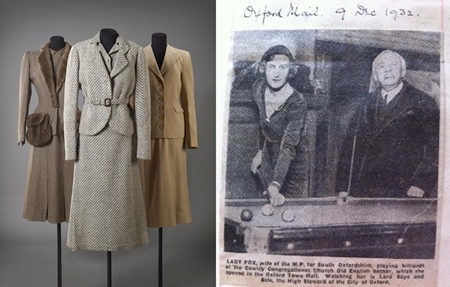 Three suits, in our collection and once owned by Lady Fox, provide a good example of high-end 1930s daywear. Born in 1906, Myra Alice Newton married Sir Gifford Wheaton Grey Fox, son of a wealthy sugar merchant in 1927. He was elected MP for Henley in Oxfordshire in 1932 and the couple divided their time between Fox’s constituency and the capital.

Lady Fox’s interwar wardrobe, much of which was auctioned in 1982, included both French and British couture garments as well unlabelled clothes, probably sewn by a dressmaker. In the 1930s, Paris was still at the top of the fashion pyramid, but London couturiers were not far behind and particularly excelled at providing suits for city and country wear. 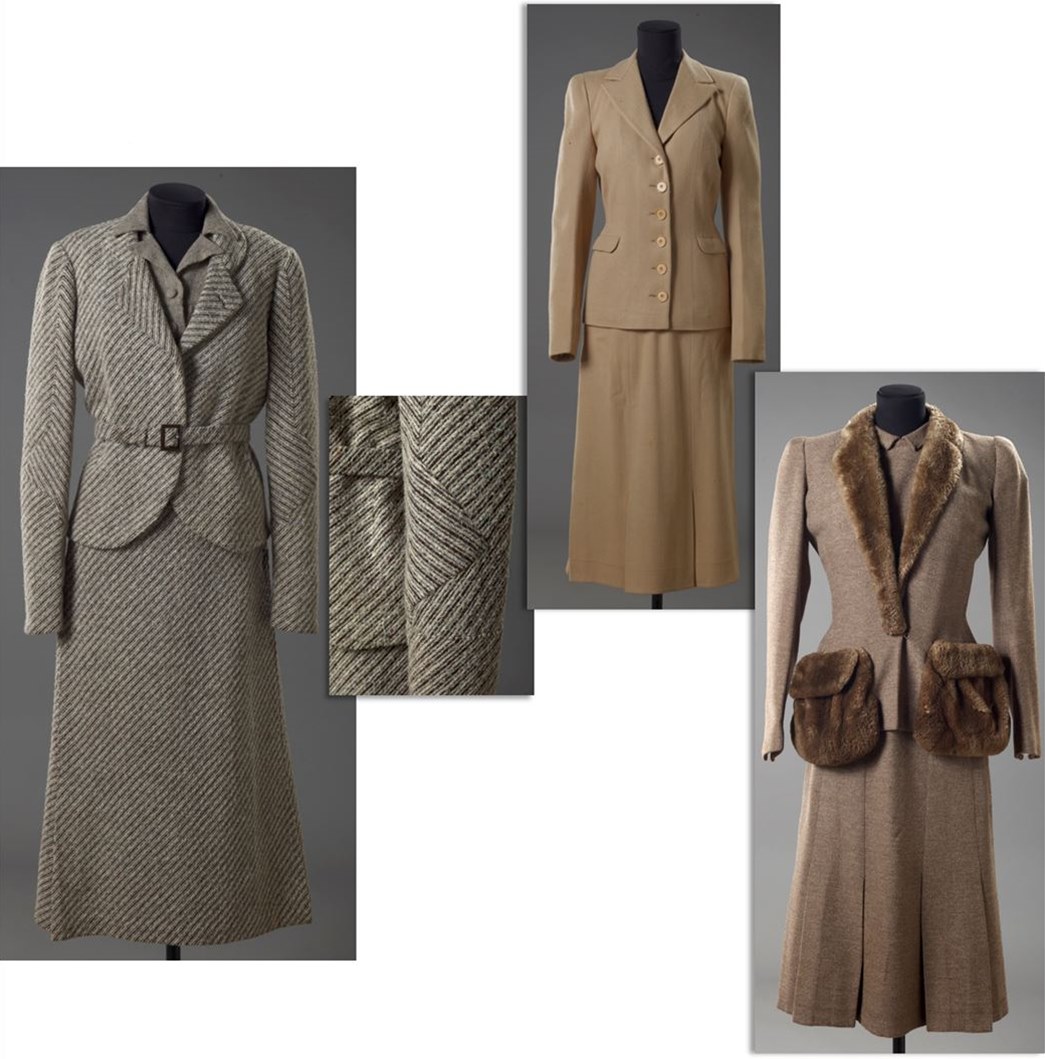 Lady Fox spread her custom widely, ordering from Molyneux, Victor Stiebel, Peter Russell and Norman Hartnell. The latter provided the fur-trimmed suit, the wide shoulders of the jacket suggesting that it was made towards the end of the decade. The maker of the sand-coloured suit ensured that the garment’s label alluded to her previous employment at a prestigious fashion house in Mount Street: “Miss Cooke, late of Enos Ltd.” The striped, unstructured and unlabelled suit bears no label and reveals the clever cut of its sleeves only on close inspection.

A night on the town 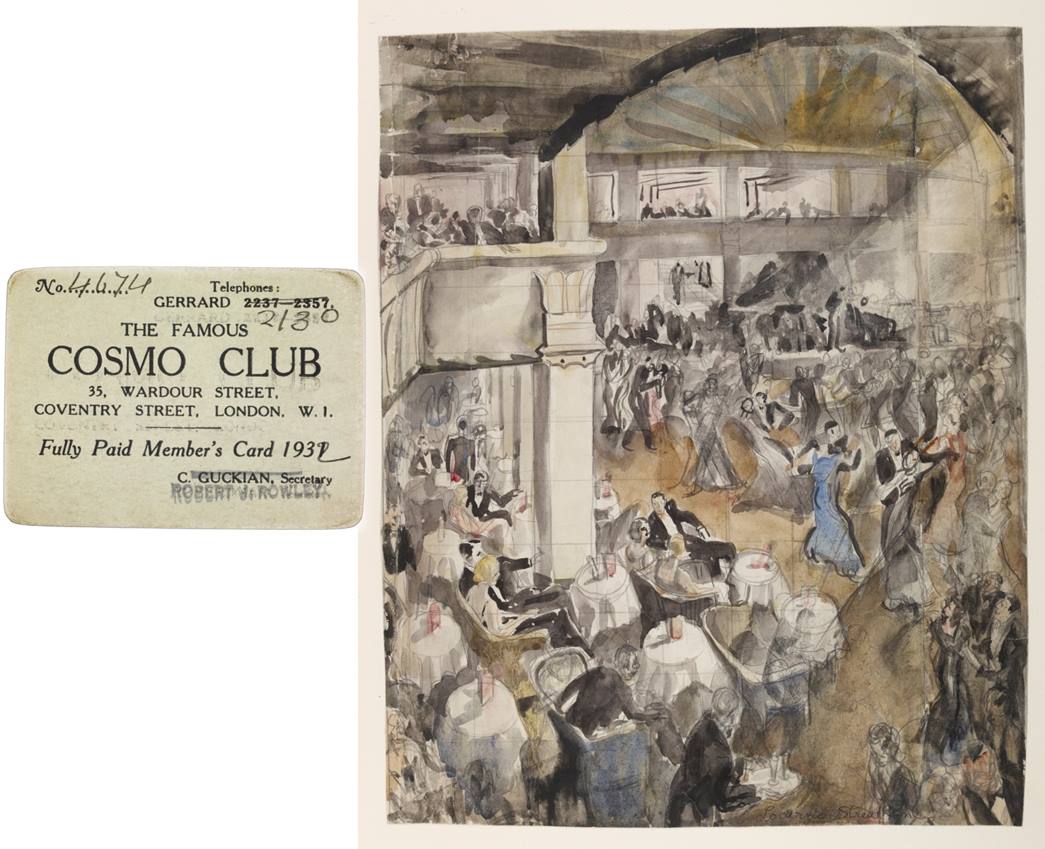 But what to wear for an evening at the Cosmo Club or the Café de Paris or the Locarno in Streatham? If a woman preferred not to go down the romantic, frilly route, she could follow the example of Hollywood star Jean Harlow in the 1933 film Dinner at Eight and wear a gown made of shiny, fluid fabrics, cut on the bias to hug her contours. Madge Garland described how the effect was achieved:

“Godets fell from bias-cut hip-lines, flares and frills rippled diagonally down to the ground. The cut-on-the-cross sections of the dress sometimes ensured so perfect a mermaid slinkiness that no opening was required. An evening gown was just slipped over the head and its clever bias-cut followed the line of the body.” 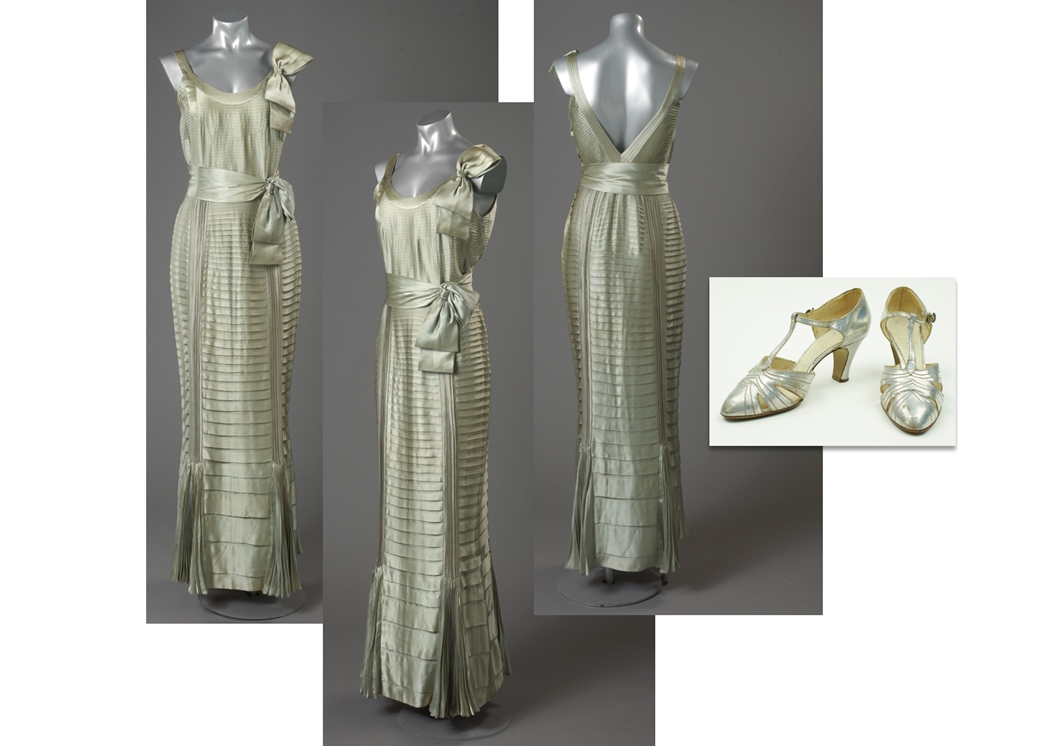 The décolletage moved to the back providing an opportunity to show off one’s newly fashionable tan. This is also a feature of an evening gown in pale green (eau-de-nil) silk satin purchased at a Hartnell sale in 1934 for £15 (apparently equivalent to more than £750 today). The dress also demonstrates the many ways in which fabrics can be pleated, while two large bows provide the requisite asymmetric detail. One small weight attached inside the garment below the knee, just above the fan pleats helped to promote clinginess. 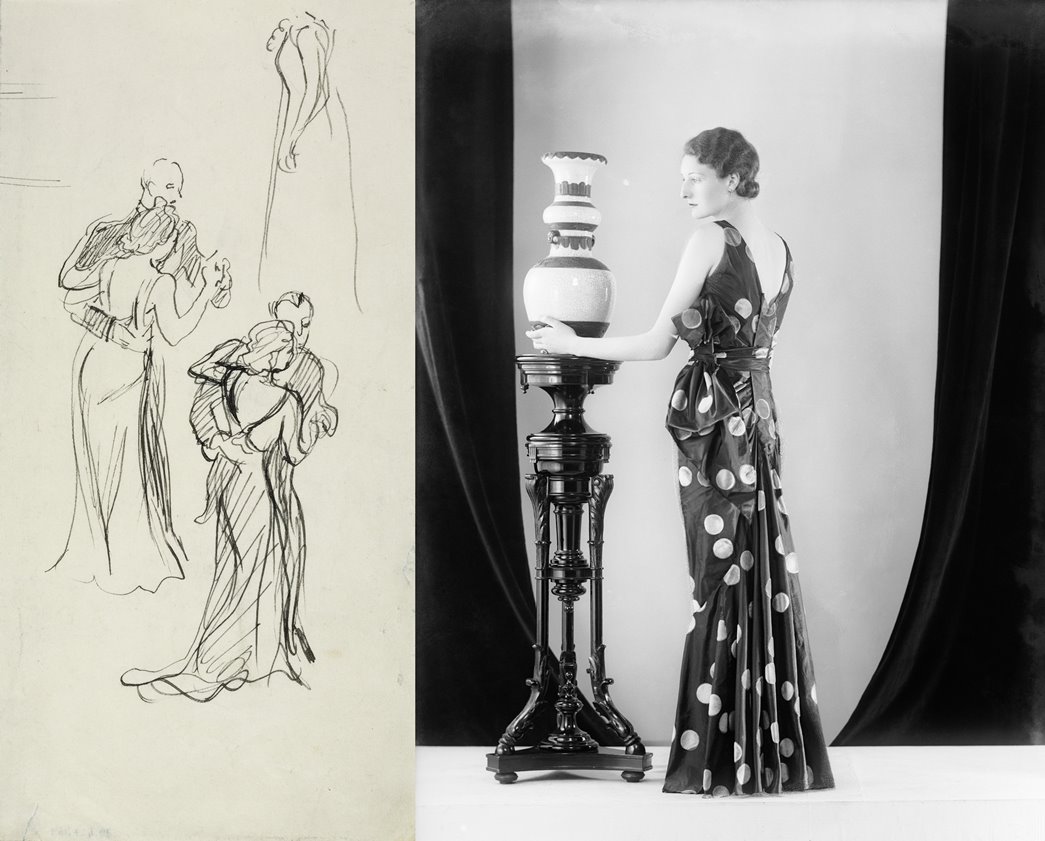 The fashion for revealing much of the wearer’s back is visible in Grace Golden’s late-1930s sketch of a Red Cross Ball at Grosvenor House and a 1931 Bassano Studio photo for Fenwicks. (ID nos: 79.427/169 ©Estate of Grace Golden; IN11840)

Gowns like this were not easy to wear, as Madge Garland explained: “Not only did women have to learn to walk in their new long dresses, they also had to manage with scarcely any underwear, for the close-fitting torso line and the outrageous back décolletages ruled out corsets and slips.[…] Perfectionists … had under-garments made specially for each gown so that the cut of one coincided with the other and no wrinkle defaced the smooth body-line.” 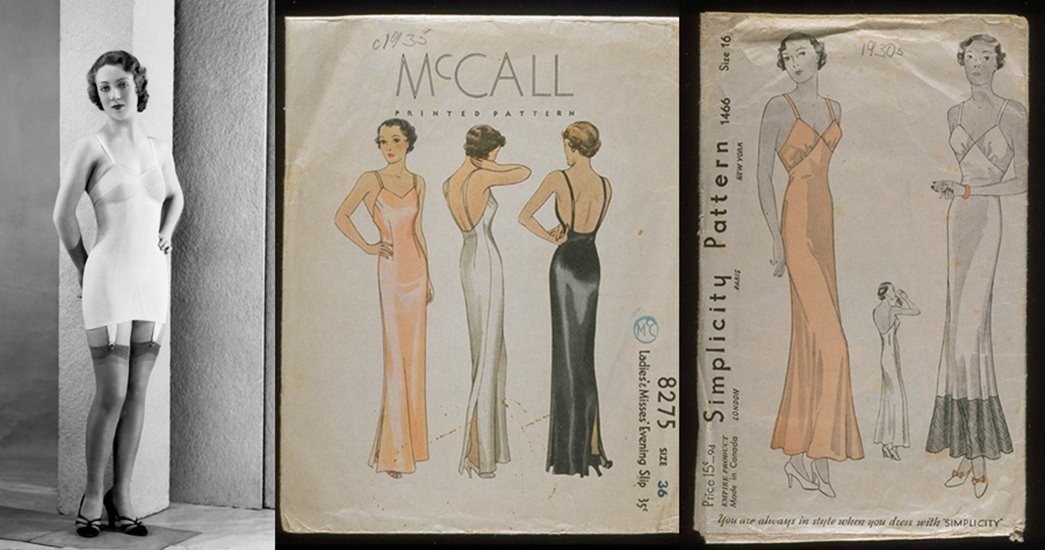 Worrying about smooth silhouettes would soon become a thing of the past. On 1 September 1939 Germany invaded Poland, marking the beginning of the Second World War. Let us turn to Madge Garland one more time:

“The pretty girl of the early Thirties with her slender body exposed by clinging silk, with long skirts fluttering round her ankles and curls on her forehead and ears, a coquettishly tip-tilted hat on her hat, would be replaced by a hermaphroditic figure in slacks, mannish jacket and hair tied up in a scarf. It is true, there was a new style of hat, but it was of tin.” 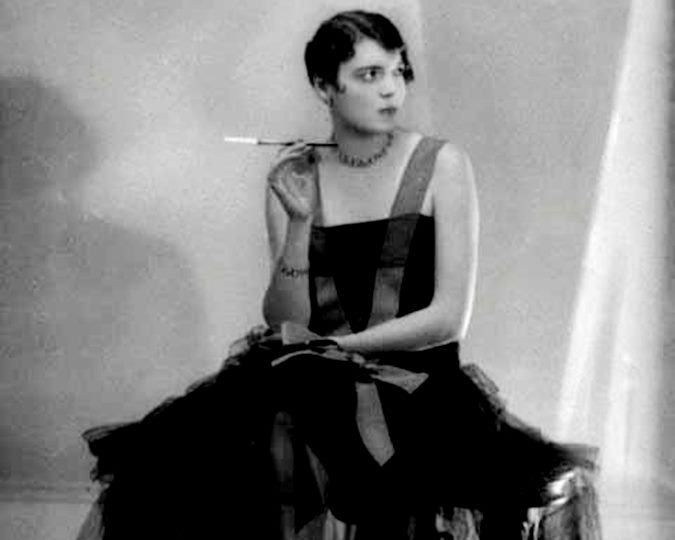 In the first instalment of a series on London style, we delve into the wardrobes of the fashionable woman of the 1920s, and explore the clothes and accessories a well-to-do female Londoner would have slipped into for a night out in the capital. 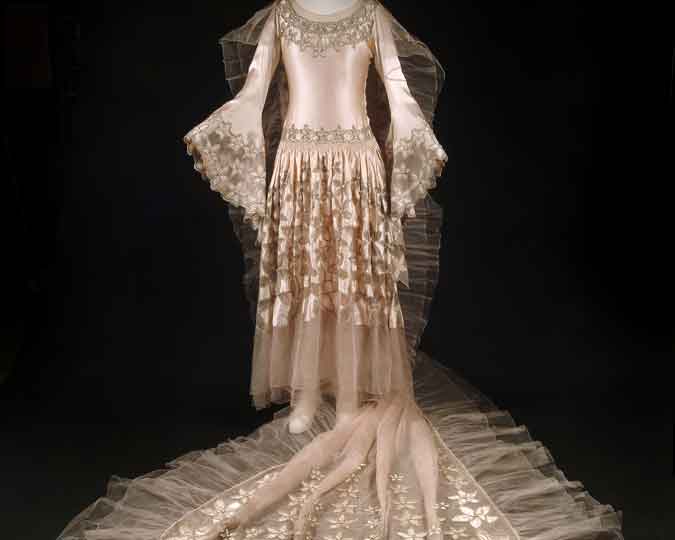