The Museum of London's collections have been assembled over hundreds of years, from the two predecessor institutions that merged to form the modern museum to the ongoing work of collecting. 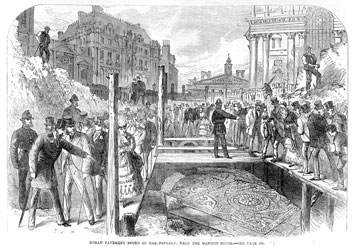 The discovery of the Bucklersbury mosaic in 1869, picture from the Illustrated London News.

Our collections include objects collected by our two predecessor institutions, the Guildhall Museum, founded in 1826, and the London Museum, founded in 1911. Since the opening of the Museum of London in 1976, and the Museum of London Docklands in 2003, our collections have expanded into new areas such as contemporary objects, archaeological archives, and social and working history.

The Guildhall Museum was established, originally as part of the Guildhall Library, to provide, "A suitable place for the reception of such Antiquities as relate to the City of London and Suburbs".

It tended to collect objects from building sites in the City acquired piecemeal from builders or antiquarians. It also collected curiosities and general bygones, such as wooden shop signs and trade tokens, and historic items associated with City livery companies or churches. 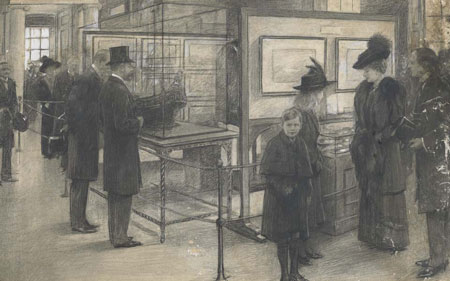 The Royal Family at the inauguration of London Museum, Kensington Palace.

The London Museum spread its collecting net wider. It was interested in objects that represented London’s present as well as its past. Its founders made public appeals for donations and had a broad-minded approach to what was accepted. The basic collecting criterion was, ‘only objects found in London or manufactured in London’. Its collections are strong in fine and decorative arts, costume, printed ephemera, theatrical material and social history from 19th and 20th century London.

The museum first opened in the State Apartments of Kensington Palace and Queen Mary, in particular, was a great supporter of the London Museum in its early days.

With the formation of the Museum of London in the 1970s, a new generation of curators began to take a more active role in shaping the collection. The scope and scale of collecting increased. The growth of professional archaeology meant that excavated material began to be acquired systematically and en masse. Now, whole assemblages were kept and logged, rather than selected finds only.

The museum aspired to collect contemporary London items in a more ambitious way. Curators saw themselves as documenting change, through photography, oral history and mass collecting of artefacts, particularly working history items from firms closing down. A lot of material related to London’s docks came into the collections, leading eventually to the opening of the Museum of London Docklands in 2003. 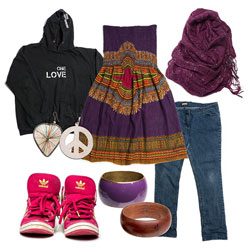 In more recent years, the museum’s collections have reflected changing curatorial practices which seek to make collecting a more collaborative process. Many Londoners have contributed their life stories to the museum’s oral history archive or their own choice of artefacts to our contemporary collections such as the Islamic fashion project.

Left you can see some of the outfits collected as part of the Islamic fashion collecting project, involving young Muslim Londoners who selected six outfits that could help to reflect contemporary experiences of being Muslim in London.