How is ever-increasing private land ownership transforming London? Bradley L. Garrett, Sydney University geographer & urban explorer, discusses possible futures for London's streets, parks, and public squares. Our City Now City Future season looks at how to overcome the challenges of living on an urban earth. What can we learn from London's past struggle for public space?

When The Development Group© announced that the outdoor area around the neighbourhood's new building would be managed through a 'public-private partnership’, we thought maybe it was a good idea. After all, taxes are high and maintaining public space – all the binmen and gardeners and security guards – must be expensive. Rather than paying out of council taxes or housing association fees, why not outsource construction, maintenance and repair of the public space?

The ‘public realm’ The Development Group© eventually created was clean, if not very inviting. No one used it to eat lunch, sunbathe or read, because no one was sure that they were allowed to. We were sure that if we really wanted to we could, of course, but the security guard in the stab vest and the cameras were kind of off-putting. So was the way the grass and stone benches were laid out, as though they were designed to be looked at rather than used. Anyway, it was clean, and we noticed this as we raced through it on the way to work, or drinks, or to catch a train out of the city to somewhere greener. 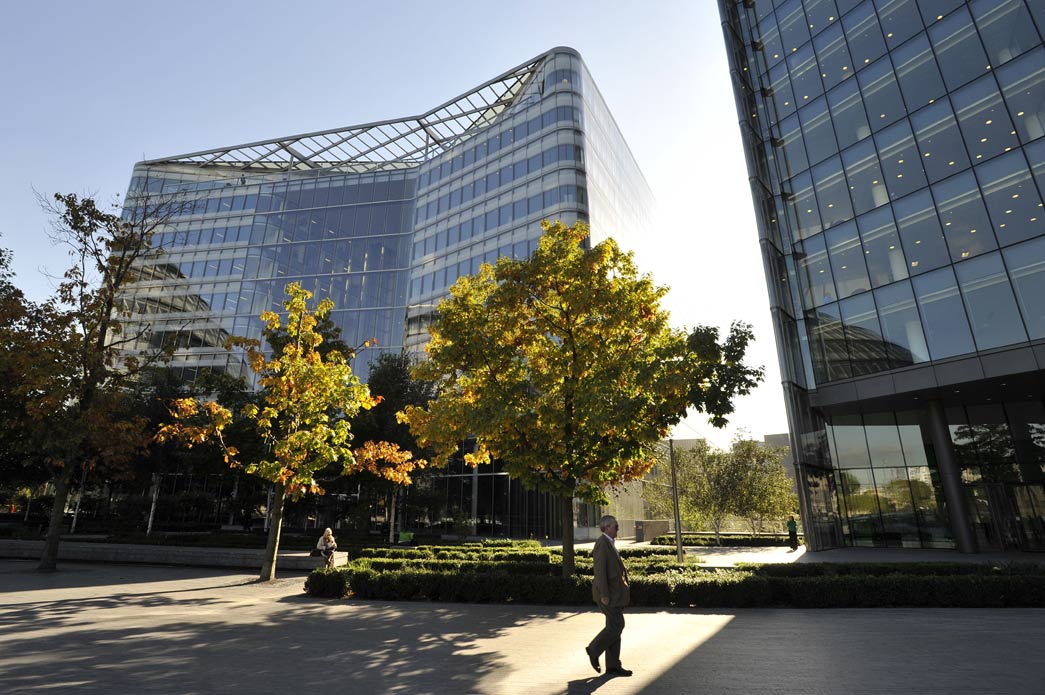 Years later, a number of parcels of neighbourhood land were purchased by single developer, some sort of foreign conglomerate. In a form letter stuffed into my letterbox, they explained that there was increasing concern about ‘liability due to crime’ on the private land they had acquired. They were unfortunately required to enforce an explicit ban on certain activities – things like busking, sleeping, taking photographs and congregating in groups.

My friends, who all live in other boroughs, thought the rule was oppressive. We chatted at the pub about whether it was justified – or even legal. We wondered why the council wasn’t stepping in. We mused over who actually owned the land – a person? A company? We considered staging a protest in the area outside of the building. One friend, a solicitor, pointed out, laughing, that we probably couldn’t, since protest was banned there. If we refused to leave when ordered to, we could be arrested for aggravated trespass. We all laughed and ordered another round.

The next morning as I crawled out of bed, head pounding, I heard water pipes come to life in the walls and wondered who lived next door. Staring down from my light-flooded flat, sipping my morning coffee, I could see security removing a homeless woman. I was embarrassed for her. I hadn’t noticed her before he grabbed her. Other than the security guards, there was never much movement on the street, as if it were always winter outside.

Quite suddenly, the embarrassment I felt for the woman made me cry and I realised I’d never been so lonely. 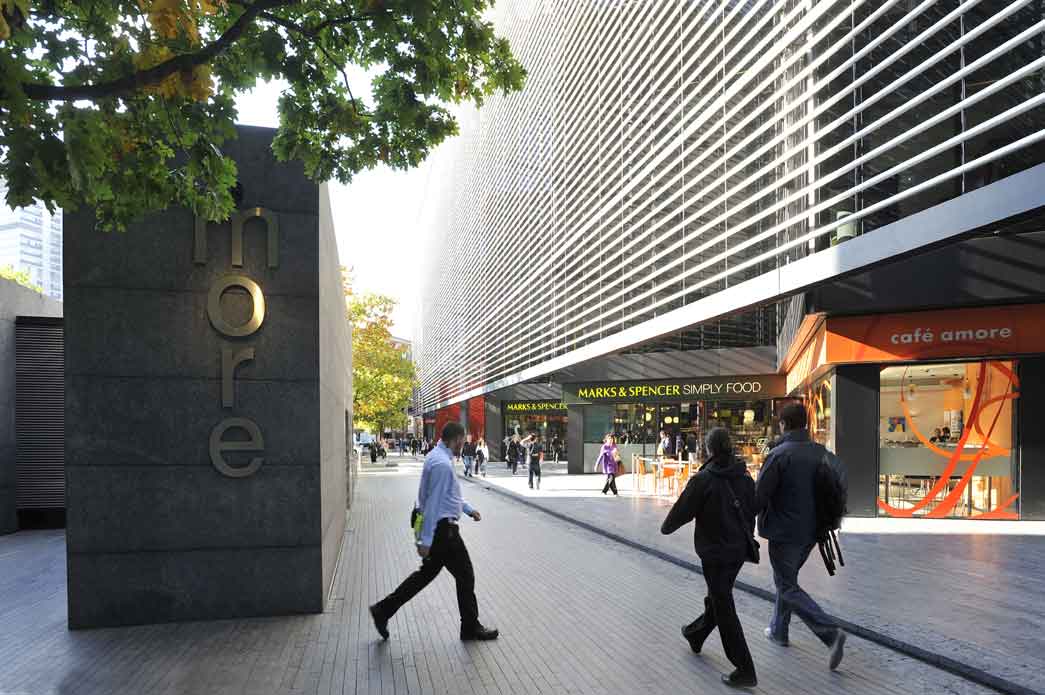 Like many things that slip from our grasp over the course of our lives, the processes eroding our public spaces are incremental and therefore often almost imperceptible. Consider the holdings of More London, a company under the wing of the Kuwaiti-based St Martins Property Group, which owns 13 acres of open land stretching down London’s Southbank from Tower Bridge to Southwark Bridge . A piecemeal enterprise to begin with, the lot was sold in 2013 for a staggering £1.7bn – one of the largest land deals in UK history. 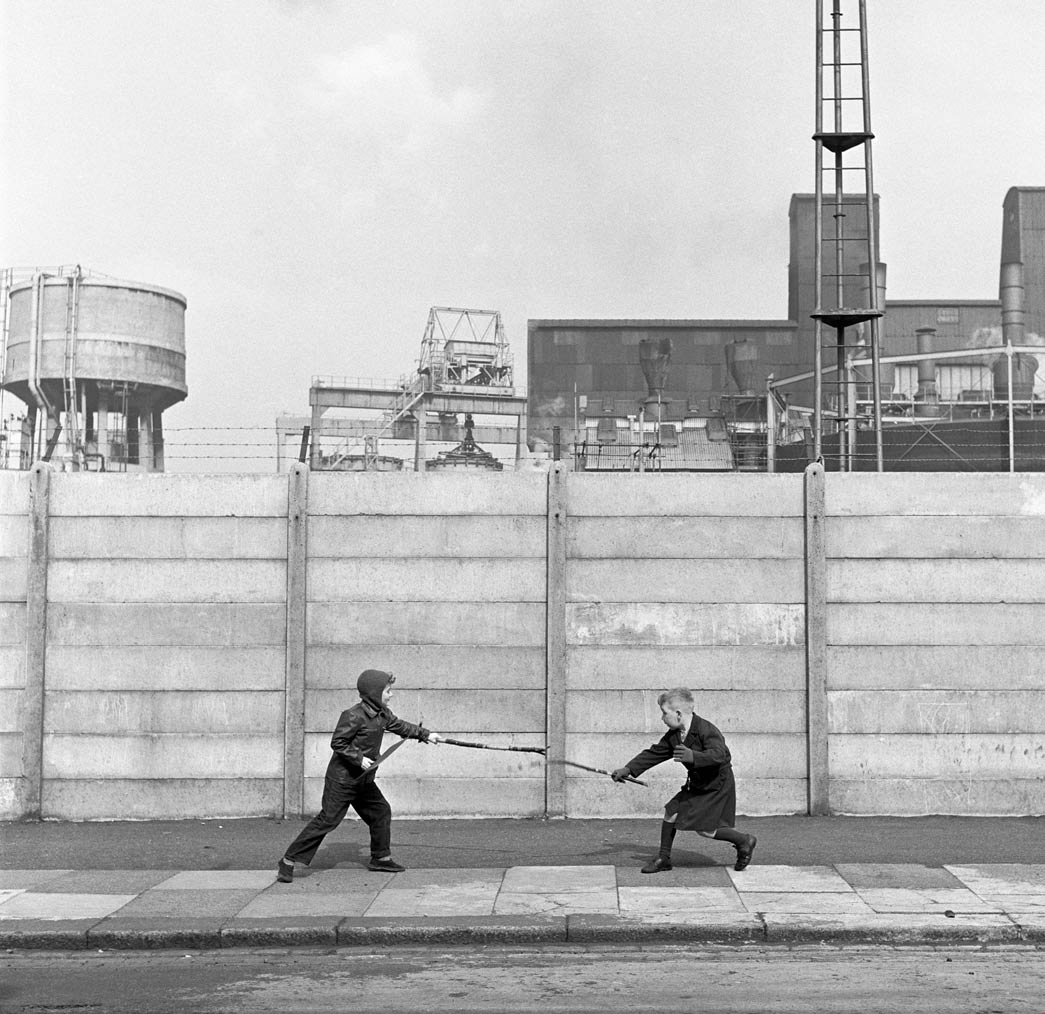 Two boys fighting with sticks in front of a concrete wall. c.1955

If these deals matter so much, why isn’t more of a fuss made about them? Well, generations of the past, who were more likely to stay in a single area their whole lives, may have had a heightened sensitivity to change. Politicians of the past may also have been less prone to prey on our nomadism. While today's more itinerant lifestyles have clear benefits in terms of breadth of experience, we often lose sight of the local. In the short term, this can lead to alienation, loneliness and feelings of disconnection and apathy. In the long term, it assures that our children will be more likely to play FIFA 2040 inside VR headsets than to kick a ball around outside.

Our rights to public space are also being curtailed through more direct legislation, such as Public Space Protection Orders or PSPOs. PSPOs create broad powers to criminalize behaviour that is not normally illegal – such as kicking a ball – within a geographically-defined area. PSPOs have been passed across the country, banning head scarves, rough sleeping, standing in pairs and carrying golf clubs or alcohol. Often, they are, unsurprisingly, connected to regeneration. One of the subsidiary effects of the rampant redevelopment of the city is that when the construction dust settles we often find that public spaces once maintained by civil bodies have been quietly passed into the hands of corporations, as part of austerity-driven buyouts. In these new ‘public realms’, our rights are severely curtailed by corporate land management policies, and monitored by the swivelling eyes of dome cameras tracking our every transgression. Photography is banned. Loitering is banned. Protest is banned. The public realm becomes space fit only for consumption; all other activities are rendered subversive, deviant, out-of-control. Even gathering becomes a threat because people gathering in public space talk to each other, start figuring things out, and start demanding explanations.

When we think about public space then, we must sidestep the spatial and think about space in terms of time. Leaving a local legacy for others, a place that they can make their own, is an essential part of the battle to retain something of the public city.

The Museum of London's City Now City Future season asks how London will change in the future, and whether we can survive and thrive on an urban earth. Our free major exhibition, The City is Ours, looked at how people from Paris to Rio are transforming their city and finished on 2 January 2018.

Dr. Garrett is writing in a personal capacity. This article does not necessarily represent the views of the Museum of London. 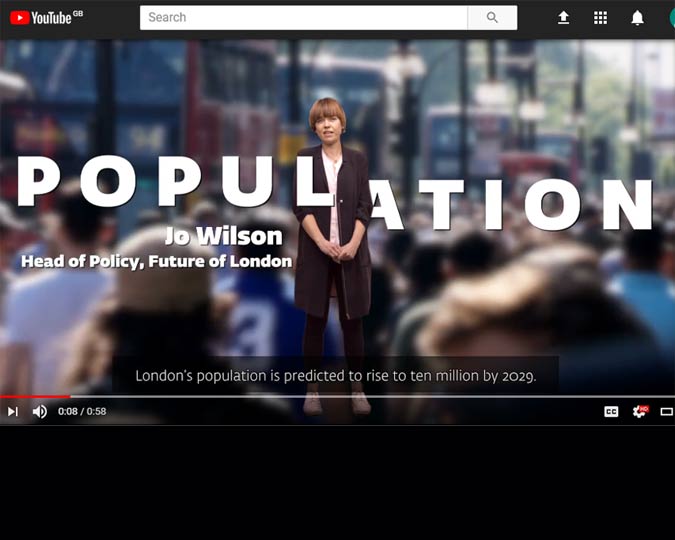