We've redecorated part of our Roman gallery at the Museum of London, giving pride of place to the artefacts from the Temple of Mithras discovered underneath the City of London in 1954. Roman curator Jackie Keily explains how she chose objects and settings to evoke a mystery cult from 1800 years ago.

In November 2017 the restored and reconstructed remains of London’s Temple of Mithras went on display in the London Mithraeum Bloomberg SPACE, in the heart of the City of London. The reconstruction shows the temple remains as they were when uncovered by archaeologists in 1954. Also on display are 600 of the many thousands of artefacts that were discovered during the excavations in 2010 to 2014, reminding us of the wonderful Roman remains that still exist beneath the streets of the City. 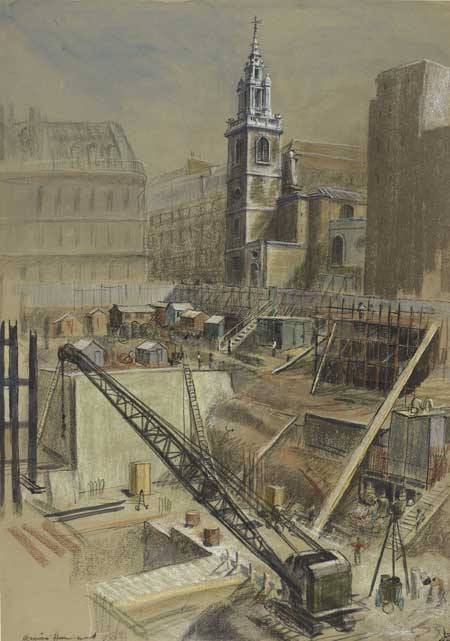 Building on the site of the Temple of Mithras, 1957

Laying the foundations of Bucklesbury House, after the excavation of the Temple of Mithras in 1955. Hermione Hammond.

But what of the objects recovered in the 1950s, from the original excavations at the site in the City of London? And what of the famous sculptures associated with the temple, some of which were found in the 1950s and some in the late 19th century? These have been housed in the Museum of London, and its predecessors, the Guildhall Museum and the London Museum, since they were first discovered. They have formed and continue to form a key part of the Roman displays in the Museum.

Inspired by the re-display of the Mithraeum, we decided to refresh our Temple of Mithras display. The London Mithraeum Bloomberg SPACE is a fantastic and atmospheric recreation of the Temple of Mithras, located on the actual site. The sculptures and other artefacts from the archaeological work in the 1950s are housed here in the Museum of London due to their importance within the broader story of Roman London. For now, we tell that story in our Roman London Gallery, but we look forward to re-displaying them in a new and exciting way within our new museum at West Smithfield in a few years’ time. 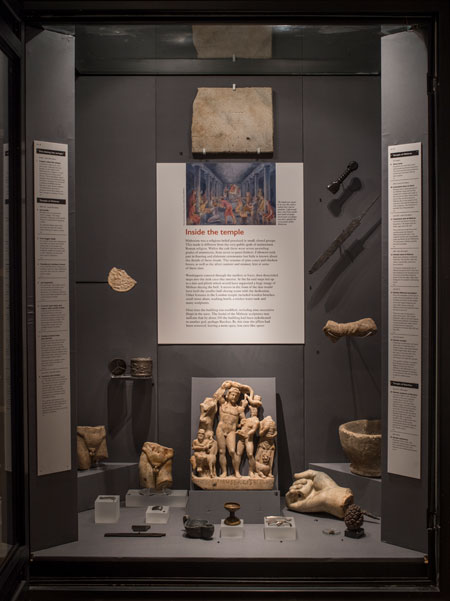 A revamped display case in our Roman gallery

As senior curator for the Roman collections, I had the wonderful job of looking at what was currently on display and then doing a bit of research to see what else we had in our collections that could be added to the existing display. The Temple of Mithras area in the gallery comprises an apsidal (semi-circular) large alcove designed to reflect the original apsidal end of the temple, complete with pillars, and a built-in case to one side of the alcove. This case contained a large box-like structure, centrally placed, which contained a Pepper’s Ghost – an optical illusion that allowed the viewer to see a model of the ruined temple, which then morphed into a model of what the temple would have looked like in use in the Roman period.

Whilst this was a fun feature, its box-like construction dominated the case and took up most of the display space. Thanks to the wonderful reconstruction now on show in at Bloomberg Space, I felt that we no longer needed to have this model reconstruction. In addition, the Pepper’s Ghost so dominated the space that the objects in there, including some very fine sculptural pieces were essentially pushed to the edges of the case and were, in some cases not very visible for visitors. These fabulous sculptures now take centre stage in the display, surrounded by other objects from our Roman collections that tell the story of the Mithraic cult.

By stripping out the case and re-lining it, we were able to create a larger area for display and in order to fill it I decided to do some research to see what else might be in our stores from the site that could help to tell the story of the temple. I spent hours delving through John Shepherd’s wonderful book on the 1950’s excavations and discovered that there were both objects in our stores that related to the Temple of Mithras story and also ones that were on display elsewhere in the Roman gallery. 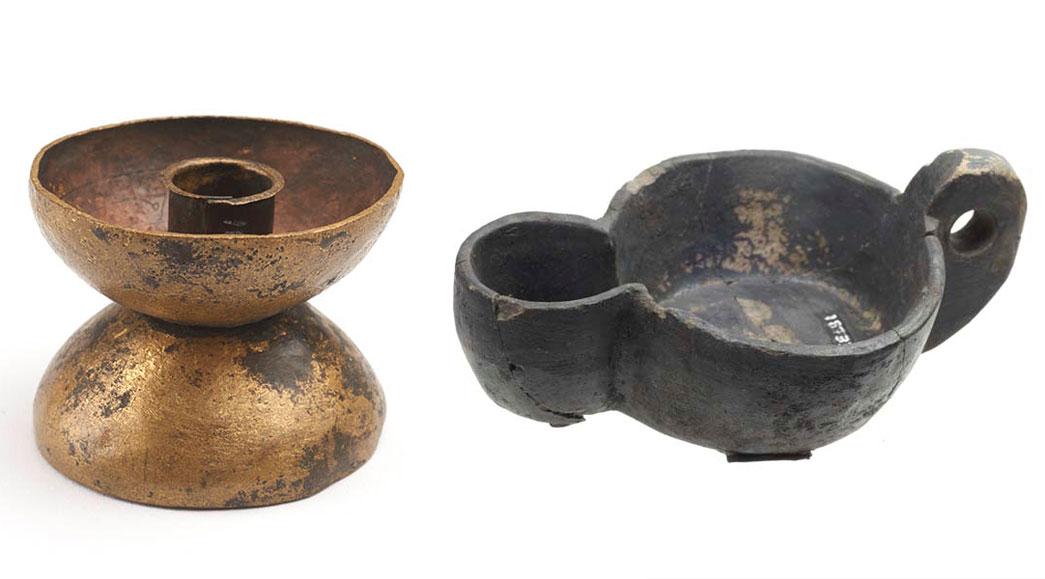 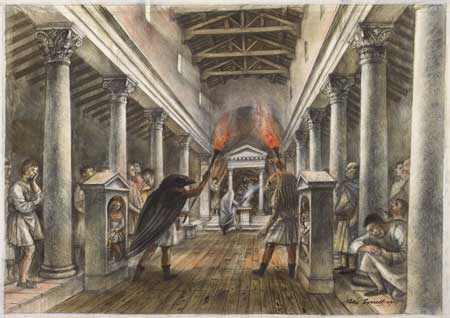 Amongst the latter were a ceramic open lamp from the temple, which featured in our Roman kitchen display, and a copper-alloy candleholder that was in a display about lighting in Roman buildings. The lamp and candle-holder are both very relevant to the temple story, as lighting would have formed an important part in the rituals in the dark cave-like interior of the temple. One can imagine the effect the flicking candles and oil lamps would have had, adding to the air of mystery.

In the stores there were fragments of jet items, which although their form and function were unidentifiable, perhaps also spoke to the mystery of the Mithraic cult, since jet was considered by the Romans to have magical properties. 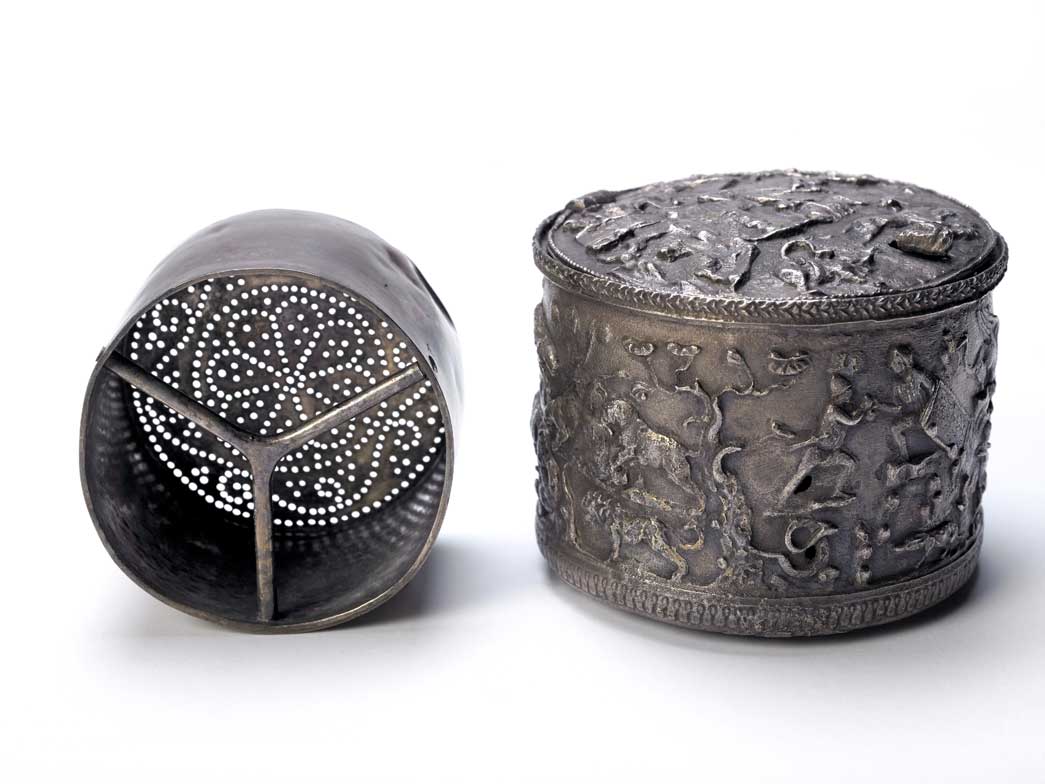 A cylindrical silver container, part of a strainer, probably used in ritual practices. 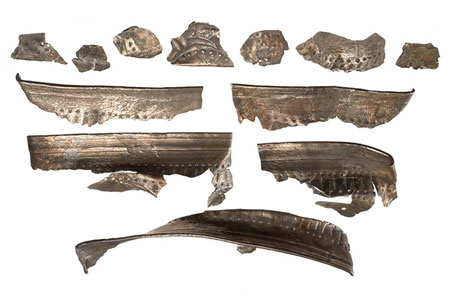 Fragments of a silver cup

Excavated in the Temple of Mithras site

Other objects include fragments of a silver cup, which was originally found close to the wonderful silver canister with hinged lid and internal strainer. Whilst the latter has been on display for years, the former, probably due to its fragmentary nature had remained in store. The bowl has punched decoration and may have been produced in Gaul.

Another ‘discovery’ was an iron dagger blade. It has lost its handle or may never have had one, as it may have formed part of a large stone sculpture. The blade itself is blunt and has never been sharpened, leading to speculation that it was either a metal fitting from a stone sculpture (perhaps Mithras’ dagger for slaying the bull) or that it was a symbolic dagger used in the Mithraic rituals. Although these rituals are shrouded in mystery, we do know that there were seven levels for initiates to attain (the seven pairs of pillars in the mithraeum itself are thought to signify these levels). The dagger may have played a part in these rituals. 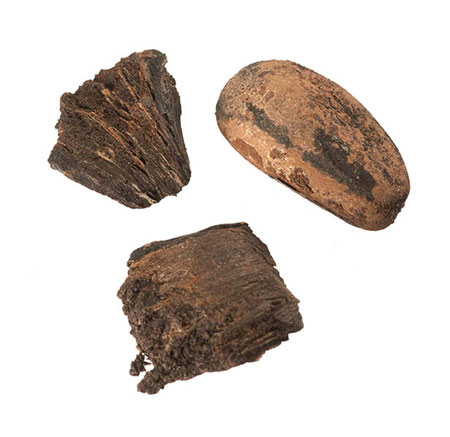 Pine kernels discovered in the Temple of Mithras

Finally, I found some stone pine kernels, also in storage. Again these had been found associated with the interior and use of the temple. Mediterranean or Italian stone pine (pinus pinea) cones and kernels have been found on a number of Roman sites in Britain and as well as a source of food (pine nuts) are thought to also have been used in religious rituals.

Stone pine cones were found associated with the mithraeum at Carrowbrugh on Hadrian’s Wall, some charred, and the heady scent of pine may have also played a part in the rituals played out in the London mithraeum. Elsewhere in Roman London they have been found associated with a cremation burial at Great Dover Street, Southwark and with the amphitheatre site in the City. The original Temple of Mithras display in the Roman gallery

The main display was also slightly rearranged. The original gallery layout had placed the famous tauroctony or bull slaying scene in a central position but below the alcove. Whilst this placed the sculpture in what was thought to be its correct position in terms of the temple and altar, it meant that most visitors would have to crouch down or lie on the floor to be able to fully appreciate this remarkable piece. 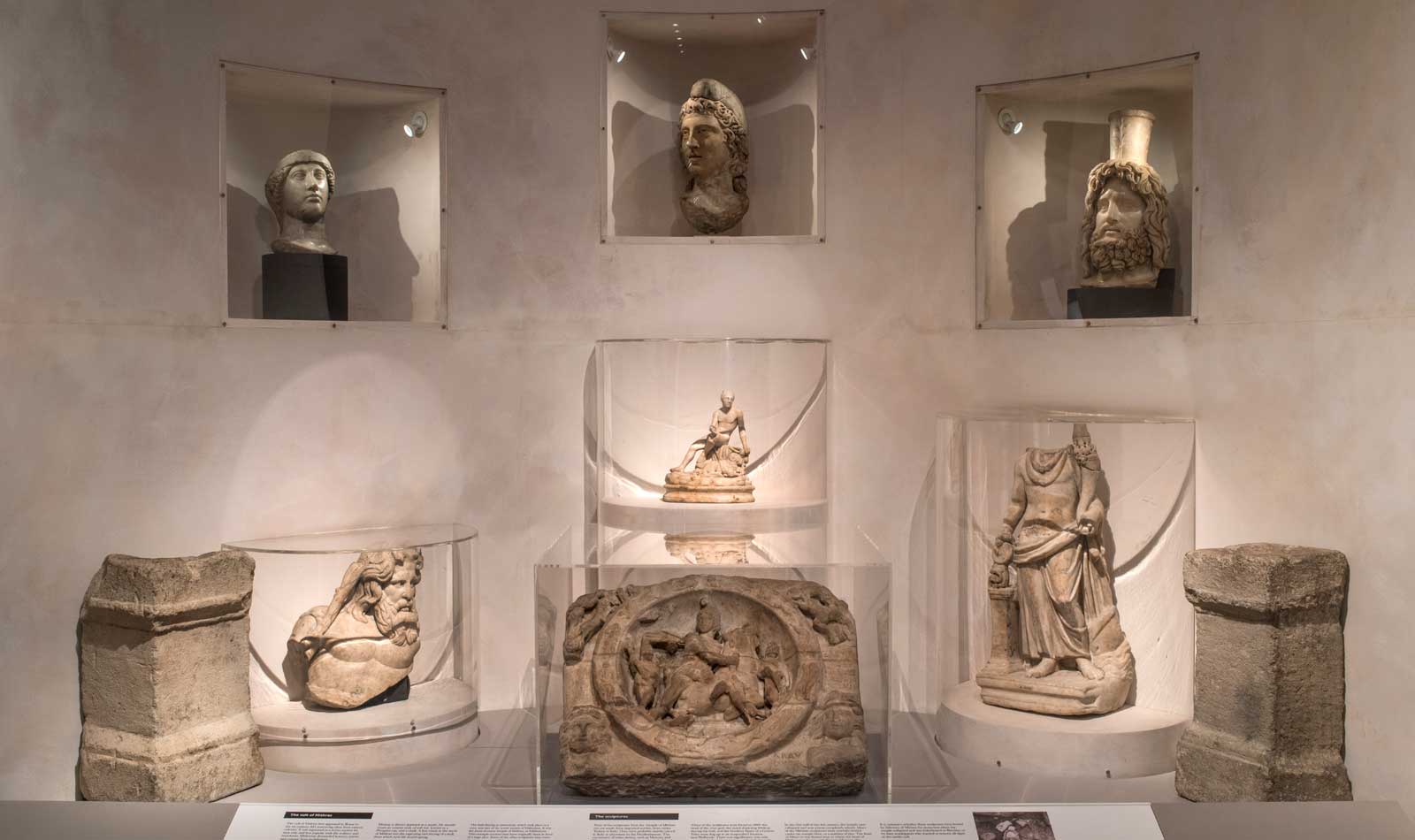 With the re-display the main aim was to make it more visible. The tauroctony is now placed centrally and at a height where it can easily be seen and its detail appreciated. It is a fantastic piece, originally found in 1889 with the head of the river god and the headless figure of a Genius. They were dug up at an unspecified location near Walbrook, and their significance only fully appreciated in 1954 once the head of Mithras had been found and the focus of the temple identified. Tauroctony (bull-slaying) statue from the Temple of Mithras

It shows Mithras plunging his dagger into the neck of a bull from whose blood sprang everlasting life.

The tauroctony features figures representing the sun and moon, two wind gods and the signs of the zodiac, all surrounding the central scene of Mithras stabbing the bull. This panel also feature the inscription: ‘Ulpius Silvanus, veteran of the second Augustan legion, paid his vow: he was initiated at Orange’. The inscription is squeezed into any available space and was probably added later. It is thought that Ulpius Silvanus was a major patron of the London mithraeum and that the inscription was added here in London, whilst the sculpture was created on the Continent. It is unclear as to whether the initiation that the inscription refers to was his initiation into the army or the cult of Mithras at Orange in southern France.

The re-display of these fantastic objects from the Mithraeum means that it is now much easier to see them in all their fascinating detail. Some of the new objects also bring certain aspects of the Mithraeum story closer to us, making us think about the lighting and smells in the temple and perhaps allowing us to catch a tiny glimpse of what might have taken place in there. So next time you’re in the Roman London gallery why not head to the Temple of Mithras display, and get re-acquainted with some old friends?

Love Roman Londinium? Want to get updates about the city's buried past straight to your inbox? Sign up for our free Archaeology newsletter for upcoming exhibitions, events and articles. 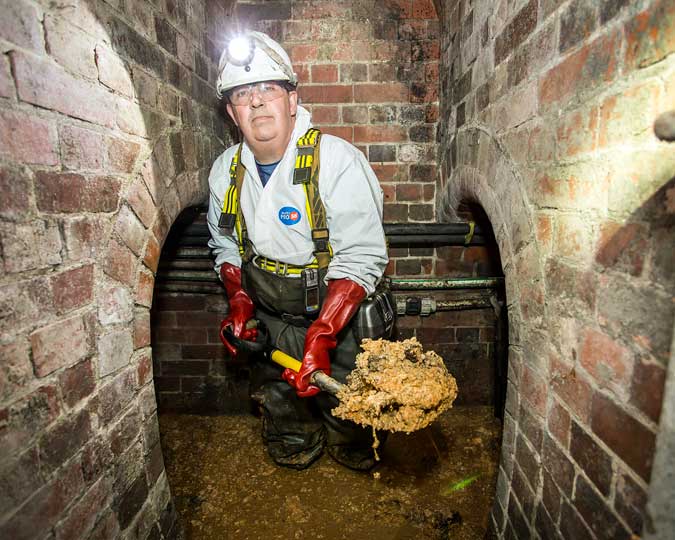 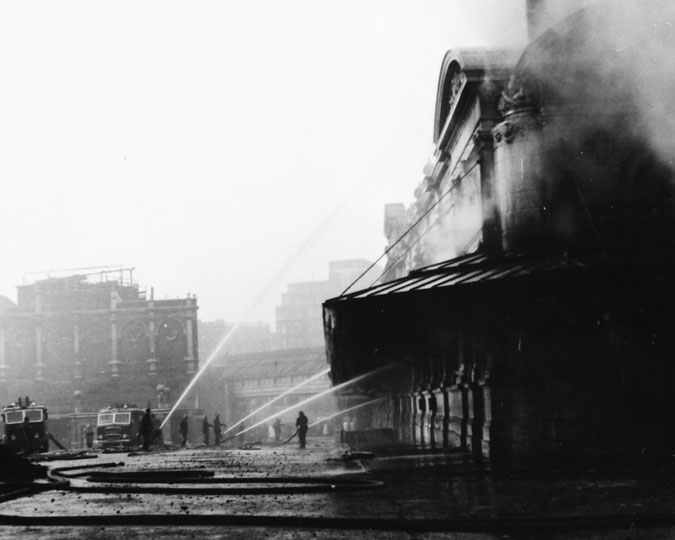 Sixty years on, we explore the legacy of a devastating fire at the site of the Museum of London's future home.