It turns out trendy London eating-spots that are also eye-wateringly expensive are nothing new: curator Danielle Thom reveals how Vauxhall Gardens brought fashionable and expensive dining to the Georgian city.

The pleasure gardens of eighteenth- and nineteenth-century London were places of sensory indulgence and delight, from the sound of orchestras playing to the sight of illuminations and fireworks visitors. One sense, however, was bound to be disappointed – taste. The food and drink on offer at Vauxhall Gardens was so notoriously expensive, and of such limited quality, that it became a standing joke among regular visitors. 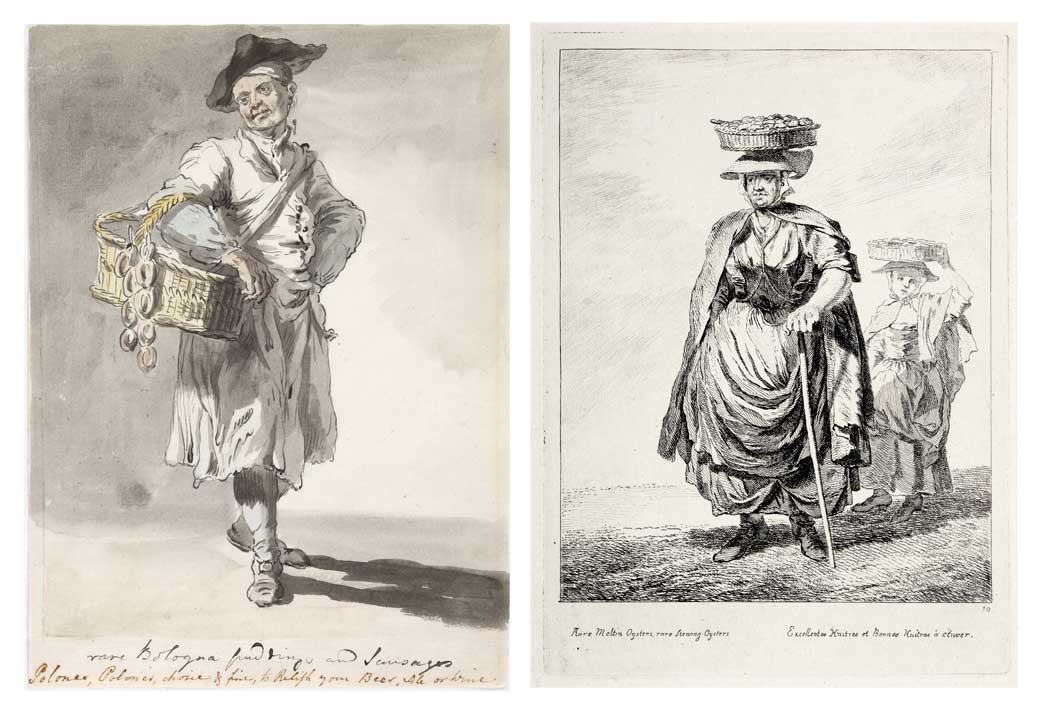 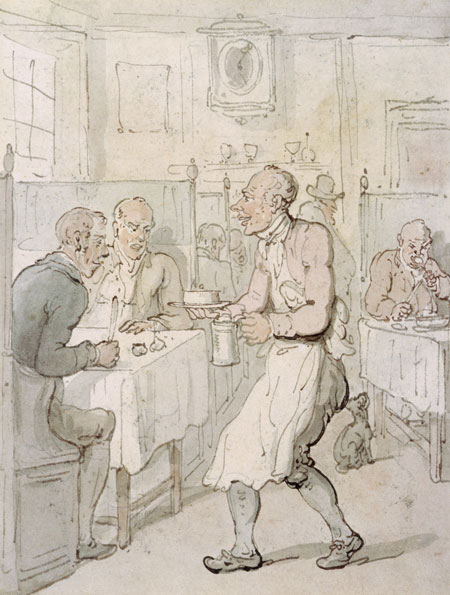 The experience of dining in the pleasure gardens must have been a novel one, at least: the concept of the public restaurant as we understand it today had not yet developed. There were taverns, 'ordinaries' and chop houses in eighteenth-century London, providing food for clerks, labourers, and travellers, but these places addressed the necessity of eating, rather than the pleasure of it. Tables were often communal, the clientele predominantly male, and the food on offer limited to basic bread and meat dishes.

The concept of ‘going out’ for a meal in public, as a couple or a family, did not exist, and the modern restaurant, with formal place settings, a menu and a wine list, was a French invention of the 1780s. 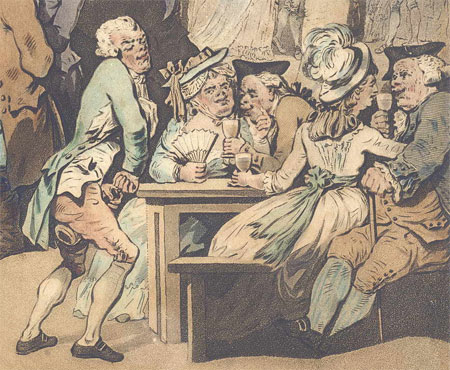 After a satirical watercolour of the Gardens by Thomas Rowlandson.

Vauxhall Gardens was therefore unusual, because it hosted diners in a series of open-air supper boxes which formed a ring around the centre of the garden, in which visitors could order meat, bread, wine and confectionery. For the first time, the wealthy and the prosperous middle classes were eating in the public gaze, rather than the privacy of home. This social mixing, and the exposure of both respectable and unmarried women to public scrutiny, was one of the many reasons why moralists railed against the gardens, although this did little to dissuade visitors.

However novel the setting might have been, the actual food was nothing especially exciting. As with the music and the art exhibited in the gardens, the menu was consciously English, rejecting the elaborate sauces and exotic ingredients of fashionable French cooking. Typical dishes included roast chicken, slices of roast beef and ham, bread and butter, olives, and salad. The slices of meat were so thin as to be translucent – an 1812 print by the caricaturist Thomas Rowlandson depicts outraged diners holding slices of Vauxhall ham in front of a candle, the light shining through it. 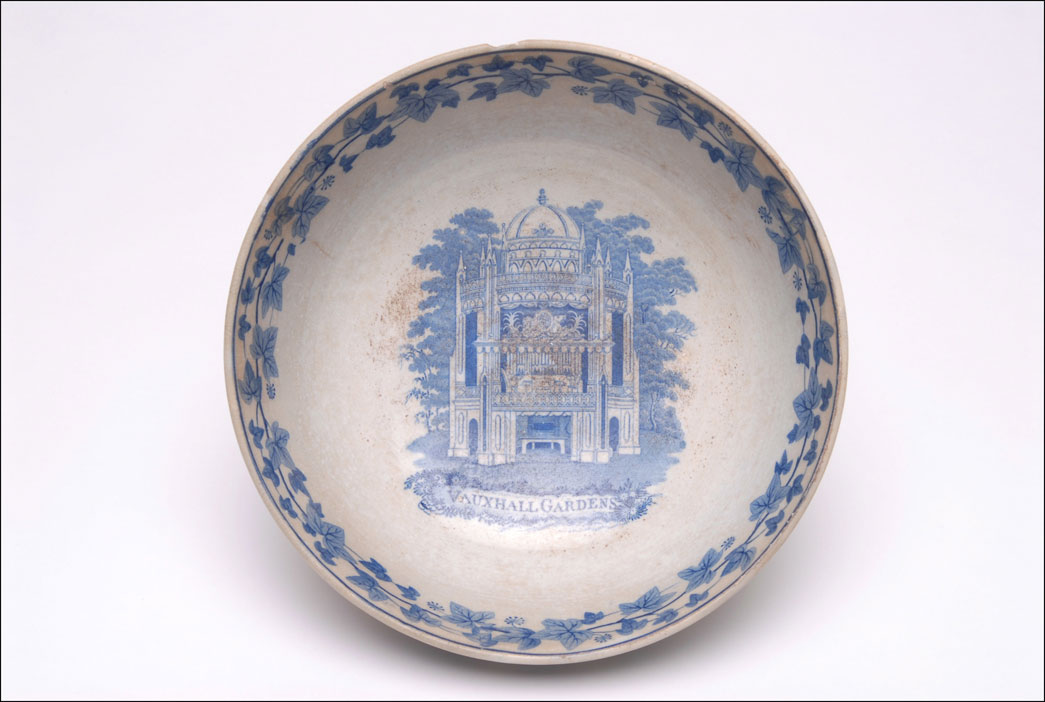 There is a view of Vauxhall gardens pavillion printed inside the bowl. ID no. A20570

The salads would not have been dissimilar to the style of salad we enjoy today: judging from contemporary recipes, eighteenth-century salads were composed of lettuce, cucumber and plenty of fresh herbs, with the occasional boiled egg and a liberal dose of vinegar and oil to dress the dish. Fruit-vendors also promenaded in the gardens, usually young women, carrying baskets of seasonal fresh fruits such as strawberries and cherries.

Enjoying this menu would have set the visitor back a considerable amount of money – and, of course, once within the gardens they were a captive audience, unable to go elsewhere to eat. While the price of entry was fixed at a relatively affordable one shilling, in 1762 a roast chicken cost the large sum of two shillings and sixpence, with a slice of beef or ham retailing at a shilling. By 1823, these prices had doubled. For context, one could obtain a simple but substantial dinner from a London ‘ordinary’, or fixed-price eating house, for as little as sixpence.

Meanwhile, at Vauxhall, a slice of bread cost a penny – the usual price of a small loaf. Of course, if you wanted butter for the bread, that was an extra twopence. Drink was even more expensive – in 1762, a bottle of champagne cost eight shillings, although weak ‘table beer’ could be had at the relatively reasonable price of fourpence per quart.

The surprise of first-time visitors at these prices, relative to the stingy amounts of food provided, was a running joke among regular patrons. In 1755, an anonymous journalist in The Gentleman’s Magazine described a conversation overheard among a merchant’s family, visiting Vauxhall for the first time: ‘"Come, come, (said the old don) it is high time, I think, to go to supper." To this the ladies readily assented; and one of the misses said, "Do let us have a chick, papa." "Zounds (said the father) they are half a crown a piece, and no bigger than a sparrow." Here the old lady took him up - "You are so stingy, Mr Rose, there is no bearing you. When one is out upon a party of pleasure, I love to appear like somebody; and what signifies a few shillings once and away, when a body is about it." This reproof so effectually silenced the old gentleman, that the youngest miss had the courage to put in a word for some ham likewise.’

Food and drink were not the most pleasurable aspect of London’s pleasure gardens, thanks to their stingy portions and high prices. Still, they were part of the experience, a shared point of reference for Londoners to grumble over, the morning after the night before.

First published during #RedressingPleasure- thank you for helping us to crowdfund our new gallery of 18th century fashion!