The decorative arts collection reflects the important role of London in manufacturing and retailing luxury goods. The museum’s holdings are particularly strong on 18th century material and include glass, silver, jewellery and enamels. 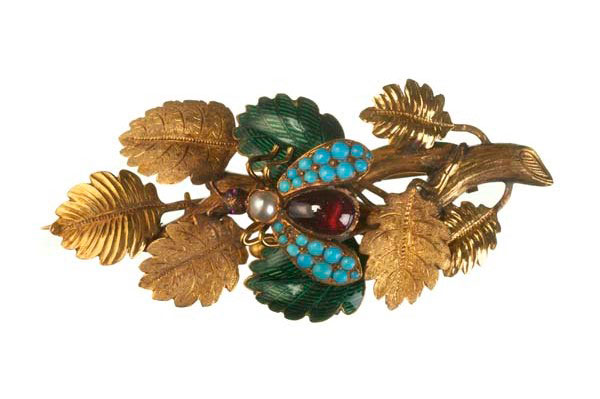 Gold brooch, chased and textured to resemble a leafy branch

Two of the leaves are naturalistically coloured with green translucent enamel. An insect in gold, set with a garnet, pearl, cabochon rubies and turquoises, is poised on one of the green leaves

From the inception of the then London Museum, the trustees and curators were keen to collect objects demonstrating the manufacturing skills of the capital. Much of the museum’s decorative arts holdings were donated by generous collectors who had assembled groups of particular types of objects.

We are anxious to obtain specimens of Bow pottery, of Chelsea, of Battersea enamels, and, indeed, of all the famous London manufactures.
An appeal from the trustees, L. Harcourt, The Times, 25 March, 1911, p. 8

The museum’s 18th century table glass consists mostly of objects collected by Sir Richard Garton, which were donated by his heirs in 1943. The Garton collection comprises over 400 individual items dating from c.1650 to the 1830s, predominantly wine glasses but also jelly and sweetmeat glasses, taper- and candlesticks. The museum also has a significant collection of products from Whitefriars, the most enduring and successful glasshouse in Britain.

18th century English porcelain includes products from the Chelsea, Bow and Vauxhall factories; the Macalaster collection of over 400 tea bowls and tea cups; ceramics made by the Martin Brothers, commemorative porcelain and London-made stoneware.