The port and river collections are a unique repository of objects that track the history of the Thames and London as a working port over the centuries. 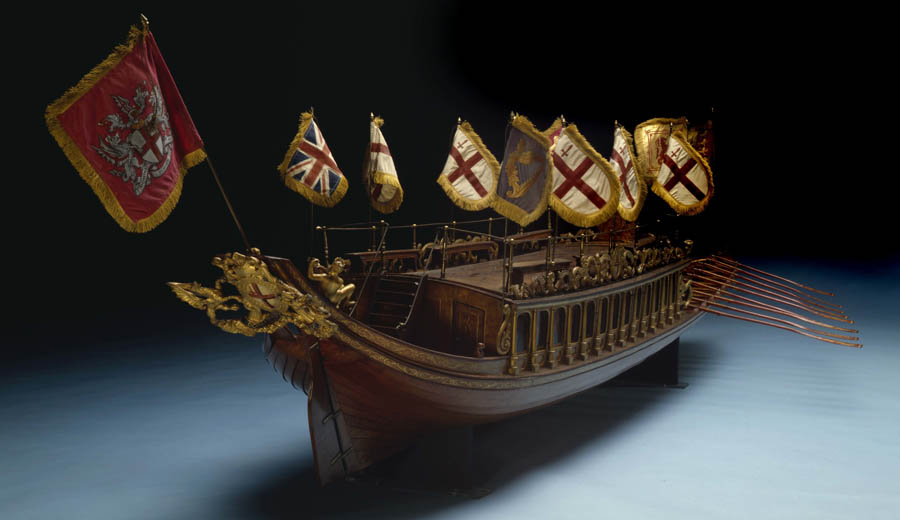 Wooden clinker-built model of the State barge used by the Lord Mayor of London, 1807

The collection contains material from London’s docks, the river Thames and riverside industries. The Port of London Authority collection was transferred to Museum of London in 1975. It contains historic items that were collected by the East and West India Dock Company in the 19th century, especially commodity samples from all over the world.

The PLA material includes cargo handling equipment and dock trade tools. The bulk of the collection was acquired between 1979 and 1990, the period that saw the closure of the West India and Millwall Docks and the Royal Group of Docks and the beginning of the redevelopment of Docklands.

Objects reflect every aspect of the loading and unloading, the handling, sampling and processing of commodities in the port. They include winches and cranes, hand trucks and carts and many varieties of dock hook. Weighing equipment ranges in size from the large beam scales to desktop scales for weighing individual cigars.

A range of Thames river craft, sailing ships and steamer models form part of the collection. Important models include the Lord Mayor of London’s barge by Searle & Co., a City of London Harbour Master’s skiff, Brewers, Chester, and Galley Quay in the City of London, c.1850 and two large 1870s half-models of HMS Northumberland built at the Millwall Ironworks.

Objects relate to a wide range port and river professions including customs and excise officers, dock police, trade union officials, surveyor’s, railway workers and dock administrative staff. There is a very large group of signs and notices that relate to port and river work. Items from London’s 18th and 19th century Greenland and South Sea Whale Fisheries include a try-pot, harpoons, scrimshaw and whale bone.