The Guildhall Yard East (GYE92) site was excavated from Portland House, 72-73 Basinghall Street, EC2 by MOLAS (Museum of London Archaeological Service) between 1992 and 1997.

Originally, it was the site of the medieval churchyard of St Lawrence Jewry, a lay cemetery, where the earliest burials are thought to date from the late eleventh century.


A total of 68 individuals were analysed and entered on to the WORD database.

Although several adults could not be sexed due to lack of skeletal completeness the bone quality across the site was excellent with only minor post mortem damage to the ends of long bones. 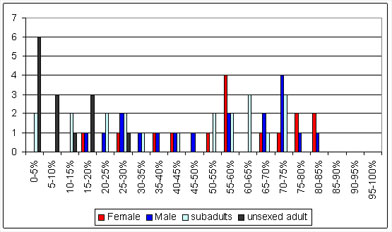 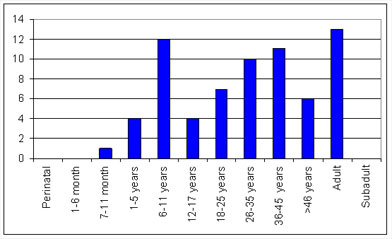 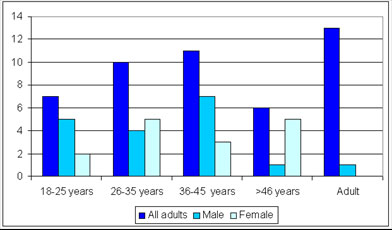 Stature estimation derived for individuals recovered from the Guildhall Yard East site indicated that the heights of both males and females were consistent with other medieval populations across Britain.

17% of all males and 7% of all females exhibited examples of healed trauma, including an avulsion fracture to the distal right humerus [10690], a fractured metacarpal [20590] and a fractured hand phalanx, resulting in the fusion of proximal and intermediate phalanges [17166].

Table 4 Distribution of vertebral pathology by sex in adults with one or more vertebrae present.

These findings are low in comparison to other medieval populations from across Britain, where incidence rates are frequently calculated at 45% or above (Roberts and Cox 2003 pp 258-259).

These figures are similar to those calculated for the medieval populations of Fish Lane in Limmerick, Greyfriars in Chester and Holy Trinity Priory in London, all of which produced incidence rates between 84 and 100%. However, compared to other populations from a similar period, the incidence rates are high (Roberts and Cox 2003 pp261-262).

Prevalence rates of hypoplasia in sub adults and adults were almost equal, with 58.6% of adults being affected and 58.3% of sub adults. Of the adults, 66.7% of males had observable hypoplasia, compared to only 50% of females. Hypoplasia is the only form of dental pathology that affected males more than females in the Guildhall Yard East population.

33.9% of all adults and 2.5% of sub-adults exhibited signs of periodontitis. Once again higher prevalence rates were observed in females, with 91.7% suffering compared to 73.3% of males. These figures are slightly higher than those seen in the majority of similar populations, which have calculated incidence rates of around 50-60% (Roberts and Cox 2003 pp 260-261).

The population from Guildhall Yard represents a small medieval community

living in the centre of London in the late eleventh and early twelfth century. This site remains largely unstudied providing plenty of opportunities for population analysis.