A municipal cemetery, the ‘New Churchyard’ founded in 1569 (and in use until 1714), was disturbed during the 19th century construction of Broad Street and Liverpool Street Stations. The site was fully excavated in 1984 to 1987 by the Museum of London Department of Urban Archaeology. Several hundred skeletons were reburied on site and a sample c. 400 individuals were retained for research.

The human skeletal remains were generally well preserved but later burials had damaged earlier interments, especially with the increasing use of coffins for burial. 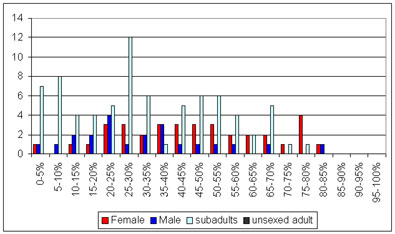 Currently, only a portion of the sample has been partially recorded. To date, 137 individuals have been entered onto WORD. There are 73 adults and 64 sub-adults (Table 3, Fig 2).The proportion of sub-adults appeared very high (46.7%) but is expected to decrease when recording is complete.

Among the aged adults there were 20 males and 30 females, a ratio: 100:150 (Table 4, Fig 3). It is also expected that this ratio will change when recording has been completed. 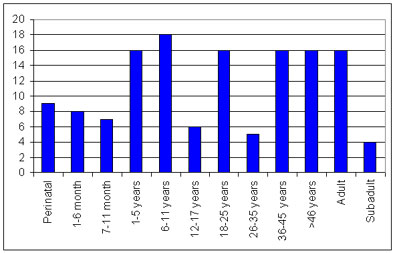 Average stature for women and men was consistent with Early Modern populations (Roberts and Cox 2003, 308).

Rickets was seen in a high proportion of individuals from the site, including healed rickets in 10% of the females and 10% of the males. Cribra orbitalia was recorded in 18.5% of the left orbits and 11.1 % of the right orbits.

Healed trauma caused by accidental mechanisms showed a high prevalence of 18.5%, but trauma indicative of interpersonal violence had a lower prevalence (3.7%). Again, these rates may change when all the individuals have been recorded.

Table of pathology from Broadgate (49kb)

Although the ‘New Churchyard’ was opened in order to relieve the congestion occurring in the existing parish churchyards, instead it became the burial place for the poorer members of London society (Harding 2002, 95-8 ). The majority of the burials were un-coffined, and only at the end of the 17th century were richer persons buried there, in lead coffins in the newly-constructed vaults. Few of them were named individuals.

A large proportion of the skulls revealed an unusual morphology. They showed an ‘occipital’ projection or ‘bun’ at the back of the head. Such crania are termed bathrocranic.