The Church and graveyard of St Benet Sherehog, otherwise known as ‘1 Poultry’, was excavated by MOLAS between 1994 and 1996.

The construction of the church most likely dates to the late 11th century and was home to one of the smallest Parishes in the City of London until it’s destruction during the great fire of London in 1666.

The once affluent Parish appears to have declined during the 16th and 17th centuries and was not rebuilt following the fire. Thereafter the land was used as a burial site for both the St Benet and St Stephen Walbrook parishes until it was closed by an act of parliament in 1853.

Of the 274 individuals recovered during excavation, 39 were medieval and 235 post medieval. 231 of the latter were retained for analysis and are believed to date primarily from the 16th and 17th centuries. All individuals were buried in coffins, aligned roughly east to west and a number of copper alloy shroud pins were recovered during the excavation. Parish records indicate that the burial ground was shared by both the wealthy and poor.

Dental measurements were not recorded for sub adults on this site.

Only 42% of individuals excavated were more than 50% complete however, the majority of bone recovered was well preserved (table1). Sub adults were perhaps unsurprisingly the least complete, while 24% of adults could not be sexed due to poor preservation (fig 1). 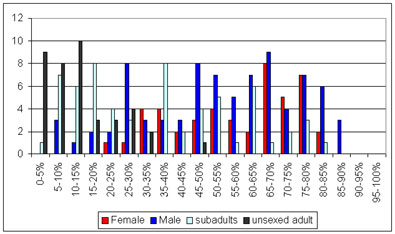 Analysis of the age/sex distribution indicated that this group also had a much higher male to female ratio that any other group, with approximately 2.8 males to every female. 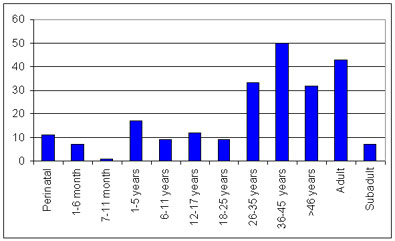 Six individuals of known age and sex were excavated, comprising 2 women and 4 men. Beyond the obvious biographical data little is known about them (Miles and White).

Stature estimation derived for individuals with complete femora indicated that the heights for both male and females were consistent with other British post medieval populations.

Trauma and infectious diseases were on the rise in post medieval populations due largely to growing industry, urbanisation and subsequent overcrowding. These pathological trends are visible among the St Benet Sherehog population. For instance there is a high incidence of trauma throughout the adult population, often visible with secondary arthritic changes.

Infections were also well represented with 20.3% of the population suffering some form of non specific infection in addition to several cases of Tuberculosis and Syphilis.

Metabolic diseases are characteristic of post medieval populations and this is reflected here, with children suffering from histiocytosis X, scurvy and rickets. The latter vitamin deficiency was notably retained into adulthood due to the bowing of adult extremities and adults are also noted to exhibit signs of osteoporosis.

Of further interest is an early craniotomy of a child approximately 7 years old and a number of adults with dental wear indicative of habitual pipe smoking.

Crude distribution analysis of adult vertebral pathology indicated that women were more prone to osteoarthritis, IVD and fusion in the spine, with approximately 5% more females than males suffering from each disease. Males, however, suffered considerably more from Schmorl’s nodes by a margin of 32.6%.

The dental pathology was generally representative of a post medieval population. There was almost a 100% prevalence of calculus and approximately 70% of caries observable in the adult population, which can be linked to the increased circulation of refined sugar during this period.

There was a notably higher incidence of periodontitis among males by almost 20%. A high prevalence of enamel hypoplasia was visible throughout the site, which may be attributable to the growing number of diseases affecting children through early development in the post medieval period.

The St Benet Sherehog individuals represent a post medieval urban population from within the City of London, during the 16th and 17th centuries. Large numbers of trauma, infectious disease and metabolic disorders are all representative of the post medieval period.

Due to its large stratified sample of middle status individuals it is an excellent site for both original and comparative research. For example, it could be compared to affluent post medieval populations such as Chelsea Old Church or poor populations like Red Cross Way.

The large sample of metabolic disorders lends itself to further study, while the high prevalence of pipe facets, named individuals and large quantities of parish records make the site ideal for socially historic studies.

A. Miles, W. White, with D. Tankard. Burial at the site of the parish church of St Benet Sherehog before and after the Great Fire: excavations at 1 Poultry, City of London